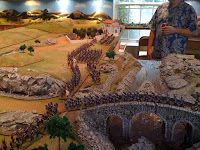 I’ve been going through some pictures of old Napoleonic games and I must say I’m hooked both on the period and the scale. While my painting skills haven’t progressed to what you can see in the picture above, I can improve them a great deal by working on this project. So now you have it - yet another project to be completed - do war gamers ever actually finish any project?

Anyway, I recently took a drive up to Lancaster to go to Historicon and came away with the makings of a initial French force:

I’ve got enough for 6 36-man Infantry battalions, a light cavalry unit and some artillery. I’d like to get some French Dragoons and a 12lbr to round out the force.

I didn’t pick up an artillery limber as they are awfully expensive - perhaps I can scratch build one using some plastic horse models and some strip wood.

Once I finish the French, I’m thinking of picking up some Foundry US war of 1812 figures (in the same scale). 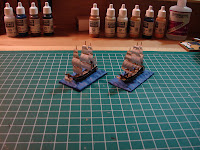 Two more ships have entered the US 1/1200 scale fleet - another 74 gun ship of the line and the famous 44 gun US Constitution. Of course, they still need to be rigged but that should get down soon. My build times for these Langton models is now around 5 hours each and I must say it’s a lot of fun.

Posted by jmilesr at 7:23 AM No comments: