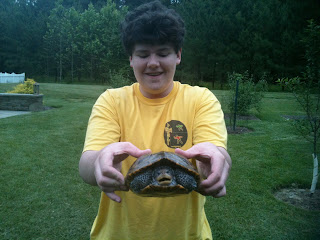 It's been an eventful weekend, nature wise, here at the Lair.  We began to harvest mulberries from our mulberry trees and the place has been over-run with nesting Terrapin Turtles.  Terrapin amphibious turtles that are native to Maryland and are a smallish version of a snapping turtle.  The ones we're seeing are about a 12 - 14 inches long.

First the Mulberries.  As you can see in the pictures below, mulberries grow on trees and are very tasty- especially in pies or jams.  Harvesting them is relatively easy - lay out a tarp under the tree shake the branches and there-you-go.  We got about 2 gallons of the berries today and hopefully a bit more next weekend.  I'd like to take credit for the planting the trees but they were on the property when we bought it. 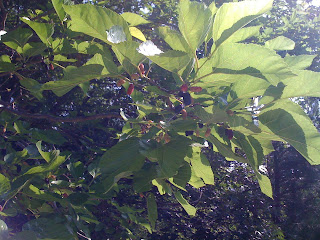 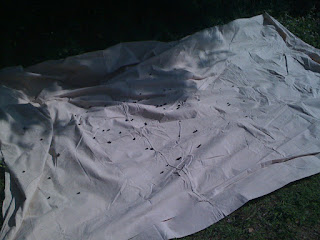 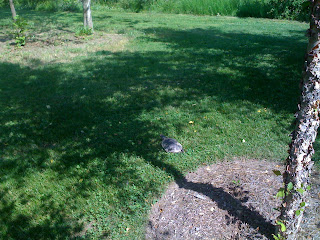 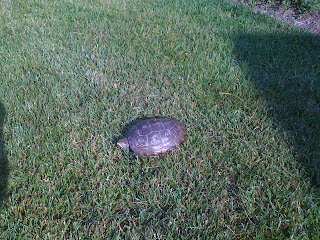 As I said before, Terrapins are native to Maryland and are the mascot of the University of Maryland, whose motto is "Fear the Turtle".  Perhaps not as intimidating as a Maryland defensive lineman, they are both very interesting and rather reclusive creatures.  We usually see only one or two a year, but have never seen four in one day.  It's prime egg laying season and we do the best we can not to disturb the guys and gals as they go about producing more.  Every now and then we have to get one out of the pool (as was the case in the first picture with my son).  They like the pool - lots of bugs and frogs to eat and warm water.  I don't think the pool chemicals are the best for them so we try not to let them take up residence too long.
Posted by jmilesr at 12:00 PM No comments: Links 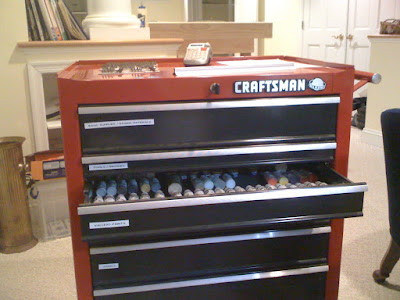 I've made a few changes to my work-bench area.  The first is organizational in nature.  This may surprise you, but I can be very sloppy when modeling (it's a shocking revelation and one that, I'm sure, is quite foreign to your own modeling efforts).  In addition to annoying the spousal unit, I do waste a good deal of time looking for tools, paint etc.  A few months earlier I had re-organized my garage and woodworking tools and ended up with an unused tool cabinet, which is perfect for a modeler's storage needs.  The cart is on wheels, is incredible sturdy and comes in a very dapper Craftsman red.  (It's actually about 12 years old, but Craftsman is top-of-the-line stuff).  One of my storage closets has a space to roll the cart in so cleaning up for company or a game night is easy. 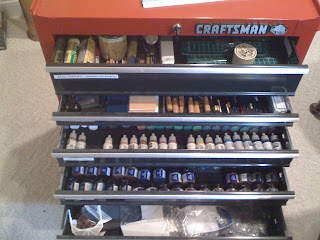 Here's a picture with some of the drawers open - The top drawer is for basing materials, glues and plastic / brass stock.  The second drawer is for tools / brushes, The 3rd and 4th store paint.  The 5th drawer has unbuilt models.  The 6th and last drawer (unopened) is used to store scenic materials.  I use a similar approach for modeling at our weekend place, but with a smaller tool cabinet and have found it really helps keep me organized.  I'm also hoping that the relatively small space for unbuilt models will keep the lead pile down to a reasonable level.  We'll see about that...  There was one, unexpected, side benefit of organizing the cabinet - I "discovered" some tools and models that I forgot I had! 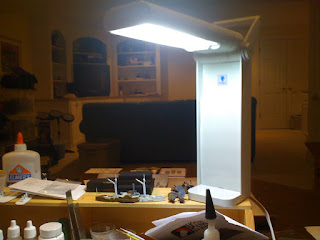 I also picked up a small natural light lamp from micro mark.  It makes a huge difference when painting and takes up very little space.  The unit folds closed when not in use.  I should have added better lighting ages ago.  The lighting also helps with taking better pictures. 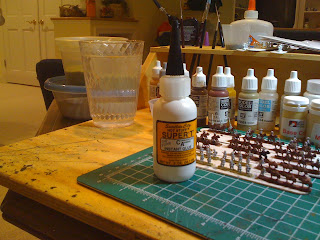 The last addition may seem a bit mundane, but it matters.  I've discovered a new super glue "Super T" from Satellite City.  It's a great glue and I have enjoyed using it on metals.  I got it from my friend Ernie over at Architects of War.
Posted by jmilesr at 7:10 AM 12 comments: Links 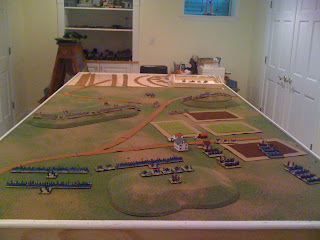 I've made a good bit of progress on my 6mm ACW armies.  The Union force of seven infantry brigades (each with four regiments), two calvary brigades and a bunch of artillery are mostly completed - I just need to attach some flags.  The Confederate force is still being painted and is about 2/3's complete. 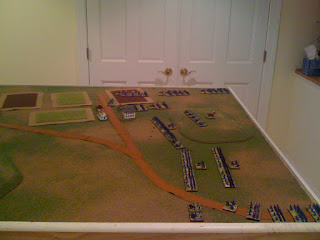 I decided to set up what I had painted to do a few run through with the black powder rule set.  I apologize that the terrain is so sparse, I need to add a lot of woods sections, but it's good enough for a trial game.  The road sections also need to be dressed up a bit. 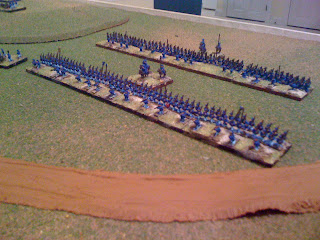 Here's a close-up of two of the union brigades.  While I'll always prefer 28mm, there is something to the mass-effect one gets with large 6mm armies. I don't really paint a lot of detail on the figures, but it seems to work. 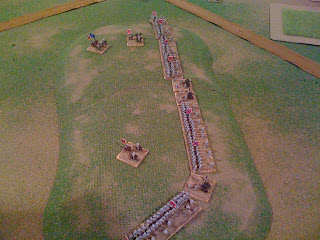 Any suggestions for acceptable (and cheap) 1/300 or 6mm scale trees to make forrest scetions out of would be greatly appreciated.
Posted by jmilesr at 7:18 PM 6 comments: Links 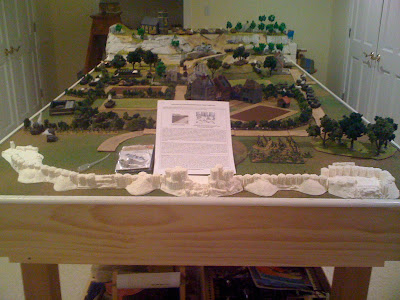 I just purchased the new Fortification Set (#1) from Architects of War - I think I'm the first US customer!  My initial reaction upon opening the box is extremely positive - the set comes with six sections of fortifications, a blister of metal siege tools, a pipette and a nicely detailed manual on painting / game use.  The scale is 28mm.  My game table is 4' wide so the you get about 44" of defensive works.  Sorry for the 15mm WWII stuff in the background, I was a bit too lazy to clear of the table for a few photo's.  The six sections consist of 2 straights (each unique), an artillery emplacement, an end redoubt, a 45 degree turn and a "under-construction" piece.   The blister of metal siege tools is intended to enhance the "under-construction" piece. 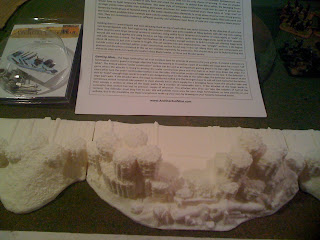 Here is a close up of the artillery section and the siege tool blister.  There are a lot of hidden details molded into the resin pieces that include powder barrels, a single shot pistol and a whole bunch of others.  I was reminded of playing "Where's Waldo?" with my son the first time I looked at each piece.  The casting is great - no bubbles and very limited flashing. 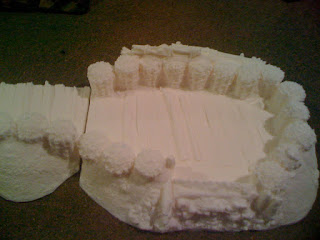 My favorite piece is the end section or redoubt.  There's enough room for a the 60x40mm 6 figure troop stands I use for my Napoleonics to line the entire interior.  I expect to have many desperate defenses of this piece in the future. 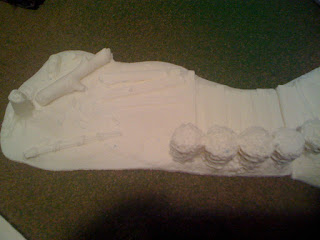 This picture is a close up of the under-construction section.  It's a nice touch to the overall set and the instructions come with some creative rules for using this piece in a siege type game.  The metal siege tool blister has a bunch of pieces designed to enhance the look including stakes to show a gabion in the process of being built. 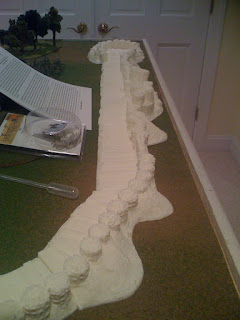 The final picture is a side view of the set - the under construction piece is out of the frame on the lower left.  Like the redoubt, all the pieces are designed to both look good but facilitate the placement of gaming figures as there is plenty of room behind the defenses to place troops.  All-in-all its a really great terrain set and I look forward to both painting and playing with once I finish my current 6mm ACW project.  I should point out that I am friends with the owners of Architects of War (which is how I was able to purchase this product before their website was completed).  I have tried to keep my comments unbiased and truthful more for Ernies benefit than anything else.  Starting a business is a tough endeavor, but doing show in today's environment makes that task even harder and false praise would be both untruthful and unfair to a friend.  I really like the products and hope you check out Architects of War if your into 28mm gaming.
Posted by jmilesr at 8:15 AM 6 comments: Links

In a rather pathetic attempt at self-congratulation, I just noticed that my little spot on the net has passed two milestones - I've had over 10,000 hits and now have 50 followers.  To be honest, it's completely beyond me how the mainstream media has missed this story.  Perhaps all the hub-bub with the oil spill, the Icelandic Volcano whose name can not be pronounced, and financial services reform has grabbed all the attention.  It does seem unfair, doesn't it.

Anyway, I've learned a few things by keeping this blog.  It's a great way to meet and interact with other historical gamers, which has both increased my enjoyment of the hobby and taught me better skills.  Keeping the blog has also been a great motivator to make progress on projects - everyone remembers the joy and pride from elementary school "Show-and-Tell" sessions.  It's either make progress on projects or write about my deep inner feelings on relationships or regale against the cruel injustices that our medical establishment piles onto Pork-Fat based food stuffs (mmmmmm, bacon....).  I think we can all agree the less said about the latter two topics the better.

I look forward to the next 50 posts!

Maybe more bacon related stories might be an improvement - I think I need to get the new Pig-Sty scenery kit from Architects of War!
Posted by jmilesr at 8:50 AM 7 comments: Links

Evolving Rules for my ACW Campaign

I've been working a good bit on the house rules for a planned ACW campaign that will feature 1/600 scale ironclads and 6mm figures.  I'm hoping to be able to field over 2,000 figures (remember their 6mm!) and a fleet of 8 Union ironclads / warships pitted against 6 Confederate vessels.  I'm about 75% complete with the painting, so the campaign rules have been an area of focus over the last few days.

The game will feature combined land and sea operations and is very loosely based on the Peninsular Campaign of 1862.  The Union player will need to capture 3 out 5 Confederate held forts.  The Confederate player can win by either preventing the Union from achieving it's objective or the CSS can achieve an immediate win if it captures 1 of the 2 union forts.  A very rough campaign map is shown at the bottom of this post.

The campaign will be played with a double blind system for strategic movement.  I've been playing with trying to web-enable the campaign movements to speed things up.  All battles will be fought on the tabletop with the miniatures.  Land Battles will be fought using Black Powder and I'm still looking for some naval rules - most likely the Featherstone ones that were brought to my attention by Steve-the-Wargamer.

Any feedback / suggestions would be greatly appreciated.

River Crossings:
Major Rivers can be crossed only at a ferry.  A ferry is useable if no enemy naval units are within 3 squares

Forts:
Each Fort is assumed to have a static garrison.  Can be placed under siege by a force equal to or greater than 4 infantry regiments.  After the 4th turn of a siege, roll a D6.  The Fort falls on a roll of "1".  Subtract 1 from the roll for each battery of artillery present at the siege, up to a max of -2. 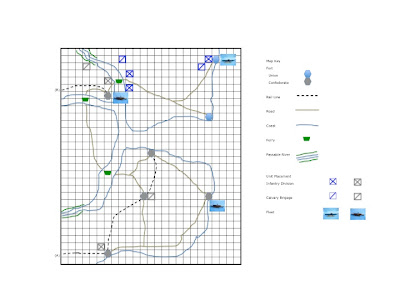