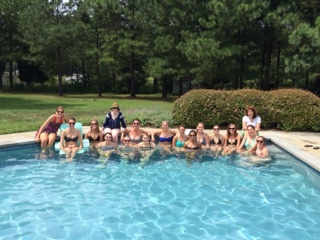 Yesterday was a tough day here in St Michaels.  My lovely wife ( pictured to the back right) hosted her Women's Dental Students Association summer event at our place and I was "required" to play the dutiful host.  Yes, It was a very difficuly duty that required me to muster up enough food to feed this ravenous horde.  Don't believe what people say about young ladies eating like birds - it's just not true.  Many fish, chickens and crabs were required to sustain these "dental scholarinas".  OK, maybe it really wasn't all that tough.... 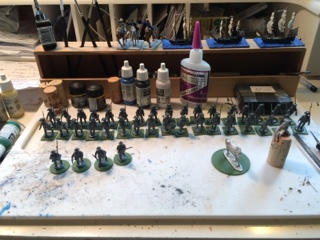 I did manage to get a little work in on some mini's before the "Assault of the She-Wolves" and assembled the first box of Perry AWI plastic Continental Infantry and a general from the Fife and Drum line.  I really like assembling plastics.  Each Perry figure comes with 4 parts - a body, 2 arms and a hat choice (from 3 options).  Not hard to assemble at all and you get a chance to inspect the figure closely to plan the painting.  Next step will be to prime there lads.


Overall, I really like this box set.  In additon to the regulars which I built this time there's an option to build out milita with different arms / rifle combinations.  All-in-all a really nice set.

A Good Day on the Chesapeake 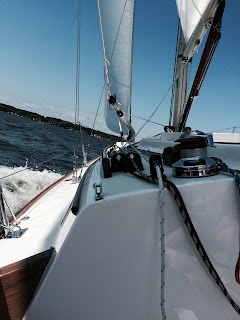 Sunday turned out to be a wonderful day were nothing went as expected but everything turned out for the better.  Early in the morning my son and I got up and left for a sail on the Bucentaure.  Unfortunately we really didn't sail (as in the picture - it's from another trip).  There was no wind and a sail boat without wind is just, well ummm... a very slow power boat.  So we turned back to port and decided to do a lot of maintenance wish included such glamorous duties as emptying the holding tank on the head (yuck) and a lot of minor repairs / improvements.

Three hours later we were done and went back to the house.  It was a lot of fun working with him on the boat. 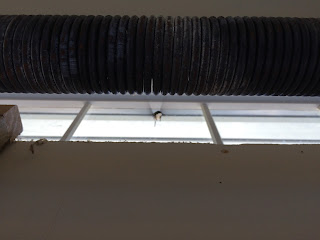 When we got back to the house it was time to mount a daring rescue operation - a humming bird was trapped in the garage and couldn't get out!  Queue the dramatic music, if you please.

Being quick thinking yet sensitive nature types we decided to capture the bird using a plastic paint cup an a piece of cardboard.  Hummingbirds are very delicate so one needs to distract them with something shiny come up from behind and place the cup over them and, finally, slide the cup over some cardboard. 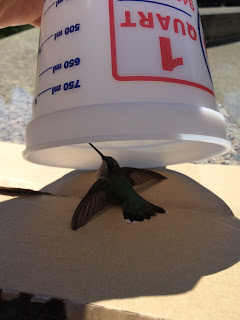 A few comic attempts and then success - the picture shows the little guy (or gal) as I was in the process of releasing.  All' well then ends well and I was sure that such courageous behavior would warrant an afternoon on the hammock. 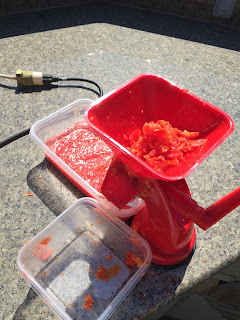 The Boss-Lady had other plans and I was tasked with grinding yet more tomatoes for sauces - a picture of our genuine Italian plastic food mill which is a must for making sauce.  We made another 3 gallons of tomato sauce that ended up in the freezer.  I spent 3 hours cutting and grinding those red menaces but ensure enough sauce to last the winter is a most worthy goal.  Plus there may have been a tomato peel fight with my son (we were outside so it's OK) 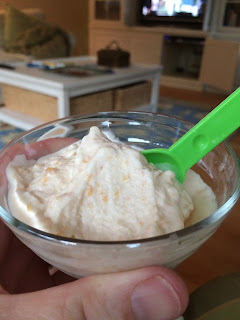 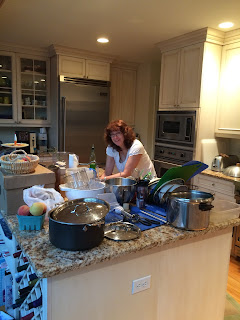 A rare shot of the Boss-lady inspecting how well I did the dishes - there were more than a few that needed so "touch-up work".

Despite not being able to sail it ended up being a very fun day and yet another example of how nice the Chesapeake Bay region can be.
Posted by jmilesr at 8:35 PM 5 comments: 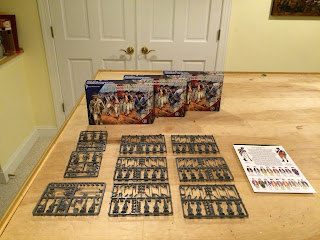 Here at the Lair, we are embarking on a new project and time period - the American Revolutionary War (A.K.A. the American War for Independence or AWI).  My starting forces to be painted are 3 boxes of plastic Continental Infantry from the Perry brothers that I picked up from the Architects of War booth at Historicon.  Hmmm Perry miniatures - what a surprise.  The Perry's also have a large range of metal AWI figures as does Fife and Drum Miniatures. 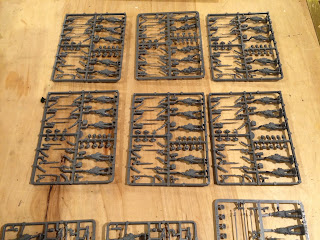 Each box has 38 figures which consist of 30 rank and file infantry is 6, 5 figure sprues and... 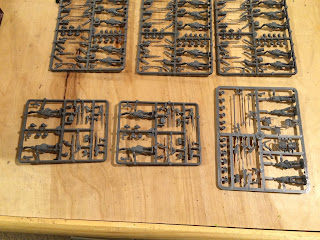 4 rifleman figures on 2, 2 figure spurs and a single command sprue of 4 figures.  Each successive Perry plastic set gets a little better and these Continental Infantry are no exception.  They can be modeled as either militia or regulars and there are a lot of arm / pose combination possibilities.

My gaming partner-in-crime, Mike, is a bit of an Anglo-file and will be painting up the British side of this little fracas.  We're both leaning towards basing for skirmish gaming rather than "big battalions".  The implication is that we'll use  round bases rather than squares for each figure.  I've got enough "big battalion" formations for both the War of 1812 and the ACW so focusing our AWI collection on skirmishing is a nice change up.

This project will be aimed at putting on an even bigger show at Historicon 2016 where we are planning to do a series of games on both the AWI and the War of 1812 - but, as always, with a little historical twist.....
Posted by jmilesr at 6:48 AM 7 comments:

My son has a great internship at Farr Yacht Design this summer doing programming for them.  It's kind of a dream job for a tech and sailing crazy college student but there is one hitch - it's unpaid.  In order to make a little cash over the summer, Sean has been building quad rotors for people.  He'll clear about $300.00 for each one he builds which I'm sure will go exclusively for books and other educational supplies while at college.

The video above is a one of the first test flights of the basic design.  The landing is a bit abrupt but safe as Sean forgot to recharge the battery from earlier tests.  Some of the earlier flights didn't go so well as he was tuning the program he wrote for flight control.


Here's a picture of the first quad that will be delivered today.  The rotors have been removed for transport. 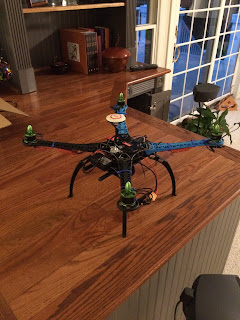 To Sean, this is a simple design and he's added mounting rails under the center so people can add go-pro cameras and such. 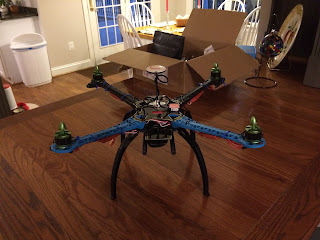 Sean's thinking about continuing his custom work while in school (I'm not so keen on that) but may do it as a fund raiser for the Carnegie Mellon Robotics Club (he's the treasurer).

At least he wasn't being lazy this summer.

Last week, the family and I went on vacation to Williamsburg, VA.  I'm a sucker for colonial Williamsburg and we had a great time.  I also had a chance to visit the US Mariners Museum in nearby Newport News, VA and I have to say I was blown away.  The center piece of the museum is the USS Montior's turret and an exhibit on the Monitor vs Virginia (aka Merrimac) encounter at Hampton Roads.  Currently there is also a great Nelson exhibit, a history of the US Navy, some wonderful exhibits on boat building through the ages and one of the finest collections of model ships I've ever seen.  To be honest this was the highlight of my trip and I'm already planning a return. 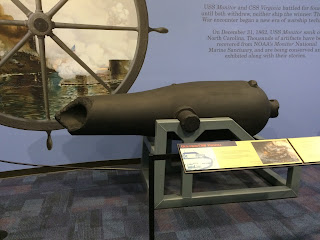 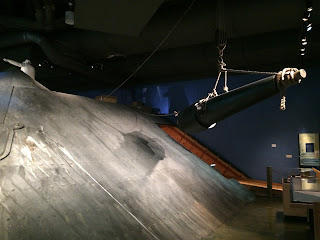 In the museum there is a full scale replica of the bow of the Virginia being readied for it's up coming fight with the monitor - the display shows the replacing of the gun damaged by the Cumberland. 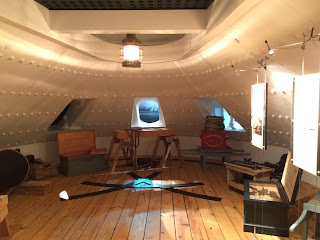 The interior of the Virginia - it's a lot more cramped than I would have thought.  I can't imagine what it would have been like to be inside these iron ovens while the guns are firing. 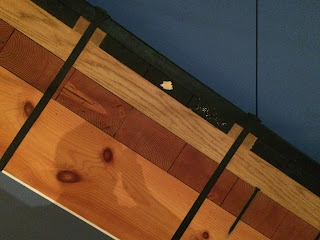 A cross-section of the Virginnia's armor - 10 inches of pine 8 inches of oak and 2 of steel. 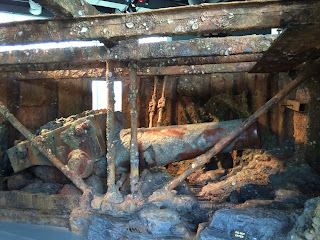 The gem of the museum is it's monitor exhibits. In addition to then actual turret, there are several reproductions that show the turret as they found her when it was raised... 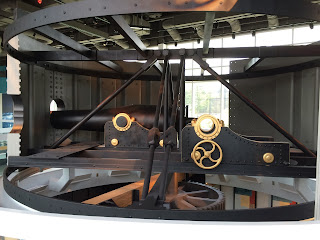 and a fully restored turret cross section - even tinier than the Virginia's interior. 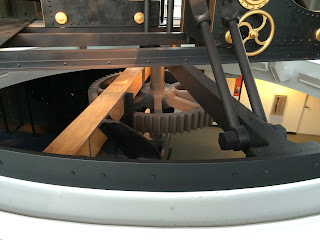 I was fascinated by the turning mechanism for the turret and probably spent 40 minutes trying to figure out it's detailed workings. 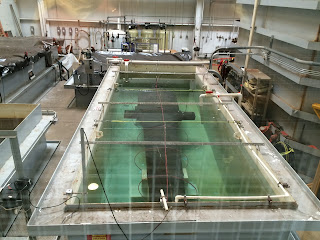 The actual turret, guns and steam engine of the monitor are not on display and are being preserved in vats of chemically treated water that preserves the metal.  Here's one of the Monitor's guns. 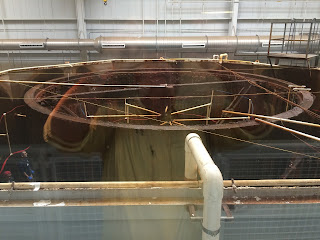 The day I visited the turret tank had been drained to allow some academic research - again I spent 30-40 minutes gazing at the turrets and guns in their preservation tanks. 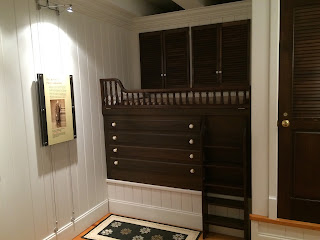 There is a very neat exhibit on the interior of the Monitor which wasn't as cramped as the turret leads you to believe.  The crew accommodations are not spacious but bigger than I thought.  First up is the Captain's cabin 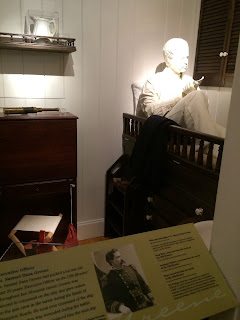 and then the XO's 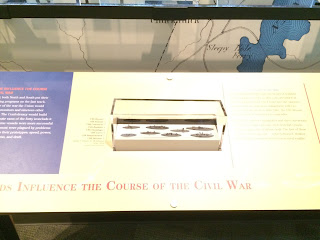 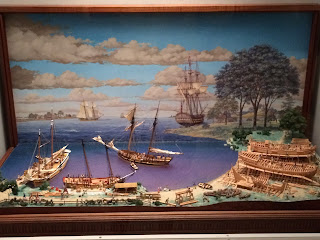 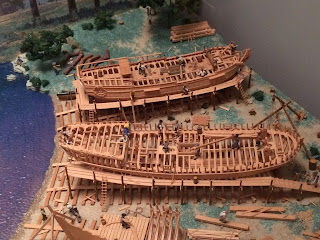 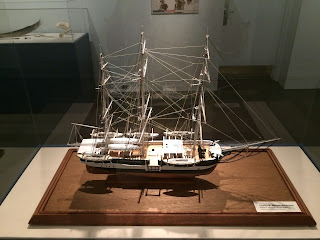 The ship models are fantastic and I took pictures of maybe 60 of them - here is a US Whaling vessel. 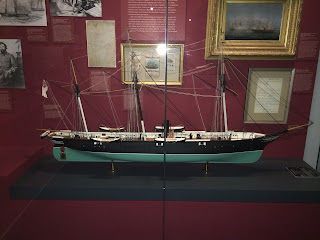 the CSS Alabama - a ship that factored heavily in my imagination as a kid growing up along the Alabama Gulf Coast.

I really can't recommend the Mariner's Museum more highly - if you're in the area it's a definite must see.