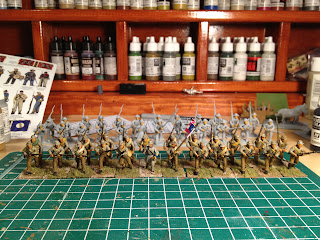 I've embarked on yet another new wargaming project - the American Civil War (ACW) in 28mm.  What spurred this madness into being?  It was those crafty Perry Brothers and the release of their 28mm Plastic Confederate Infantry set.  Each box contains 44 figures - 40 Infantry figures on 8, 5 figure sprues and 4 Command figures on 2, 2 figure sprues.

I've managed to complete 3, 24 figure infantry regiments and you can see the pictures to the left of this post.  Overall, I would rate this set as superb and highly recommend them to anyone interested in 28mm ACW.  Two big thumbs up. 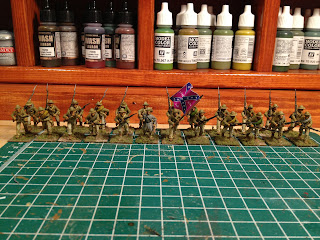 Positives:
Each infantry sprue has arms so you can model a figure as advancing or with their rifle/musket shouldered and the arms mix and match with each figure.  In addition there are ten hats types per sprue which allows you to mix the headgear.  That's a big plus for trying to simulate the mix of equipment that was common in the confederate army.

The bayonets are a bit more to scale with these figures than the Perry Plastic Napoleonics (i.e. they are thinner) that's a big plus for looks but they can break (I broke one during the building process).  Being plastic such issues are easily fixed. 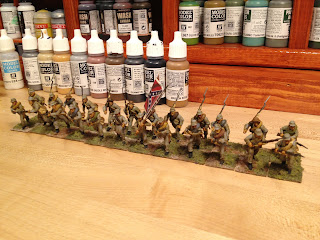 The sculpting is very clean and these guys are a breeze to paint.  Assembly was very quick and simple.

The command sprue has an officer figure who is holding a pistol and a sword in its scabbard along with a drummer.  The is also a set of arms holding a flag pole.  One note - the drummer figure has the sash for holding the drum molded on and isn't a good choice to hold the flag - use one of the infantry figures.  I figured that out after my third flag holder - Dohhhhh!

Opportunities for Improvement:
I only have two suggestions for improvement and they are both very minor.  (1) I tend to replace plastic flag poles with brass rod as they don't hold up all that well to table top wear and tear.  Having the flag pole and bearers arms molded as one piece makes that a bit harder to do - it would be a lot easier if the flag pole was a separate piece.  (2) (and this one is just a nit) The flags on the painting guide are very bright in their printing and don't look all the nice on the models.

Overall, I highly recommend this set of figures.  I've purchased 5 boxes and plan to get another 5 as I flesh out my ACW force.

I would rate these a 10 out of 10, but then again I've been accused of being a Perry fan boy in the past.  Guilty as charged! 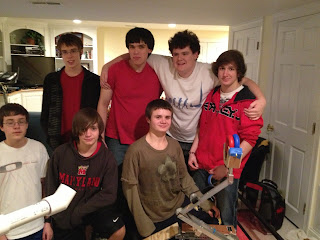 Not a lot of painting is going on right now over here in the Lair.  It's all robotics with my son being on two different teams and me being a coach.  It's rather hectic and will be until April.

Pictured is Sean's FTC team (3113) which is made up of scots from his Boy Scout troop. 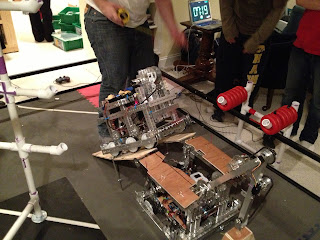 This years competition involves playing a form of tick-tack-toe.  The robot needs to take the rings from the dispenser (on the right) and place them on the scoring rack (on the left).  The higher the level, the higher the points and there are bonuses for getting three in a row.  There are extra points for raising your alliance partner robot off the mat - we use a scissor bridge concept.

Oh yeah, this is all done while an opponents robot is ramming you while playing defense - it's great fun.

The team is fund raising right now and have set up an Indie Go-Go site.  Take a look if your interested: 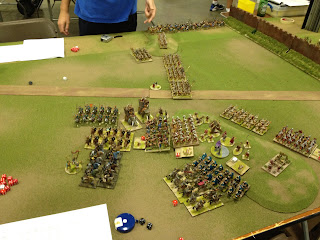 Yes it's once again time for my year end wrap up and look forward for this year.  I try to time putting this stuff out when most readers are really not interested in reading any further recaps - that way none of you will remember my goals for this year!

Overall for both a gaming and personal level, 2012 was a very good year and I find myself to be  grateful for what I have.

From a gaming aspect 2012 was very productive. My final painting tally exceeded what I hoped to get done and I completed my War of 1812 project.  Here's my painting tally for 2012:

But how did I do vs my goals that I set out for the year?  Unlike last year, most of the goals were achieved:

(1) Attend the 2012 HCON and Host a game             ACHIEVED
I put on two successful Hail Caesar games (pictured above) and had a great time at HCON.  I've already got hotel reservations for this year's HCON.  I also attended Fall IN and put on a War of 1812 game that was OK - it could have used a bit more play testing.  I think going forward I'm only going to shoot for putting on one convention game per year.

(2) Finish the War of 1812 Project                                ACHIEVED
Well it's achieved as much as only army can be said to be complete - there always stuff that can be added but I do have two largish British and US armies (roughly 400 figures each) and the Brits will double for the Peninsular so that's a big plus.  I'll be adding some bits and pieces - more indians and Canadian Militia but it's good to at least have to project in the "complex" column.  I should point out I did cheat a bit in the British were all painted by others (that's why they look so good!)

Additions: X-Wing, Faniticide, Regimental Fire and Fury, Bolt Action
Subtractions: zip (I think this is where the problem may be)

In closing I do owe a debt of gratitude to Curt over at Analogue hobbies for running his annual painting competition.  I doubt I would have had half the productivity I had in 2012 with the impetuous and fun of participating in his event.  Here's to even more productivity in 2013!