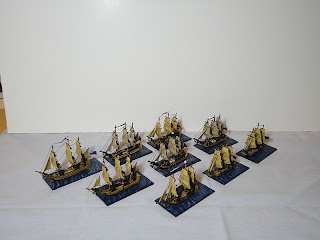 I know that I have been blathering on about the latest shiny new object, Saga.  However, in a fit of unfamiliar discipline, I decided I needed to finish at least one existing project before starting another.  I had some minor rigging and repair work to do on my 1/1200 Napoleonic fleet mini's (all Langton models) so I selected those to be "done".  The first picture shows my British fleet which consists of one powerful First Rate (HMS Victory), 5 Third Rates (74's), 1 Third Rate w/ 64 guns (HMS Agamemnon) and two 44 gun Frigates.  I play with the Trafalgar rules and this is a very deadly force. 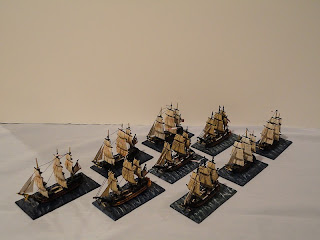 Opposing the Brits is the French Fleet (naturally).  The French are lead by a Second Rate (Bucentaure), 6 Third Rate 74's and 2 44 gun Frigates.  9 ships in total.  The Bucentaure (first ship, lower left corner) has been my favorite build yet. 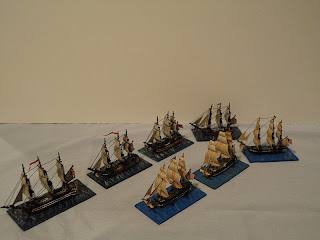 In addition to the Brits and French, I have a small fleet of 4 Spanish ships, including the mighty Santisima Trinidad (with a whopping 140 guns).  There is also a small US fleet consisting of 2, 74 gun Third Rates and a 44 gun Frigate (USS Constitution).  I plan on expanding the US fleet as I have a few more models in inventory to build. 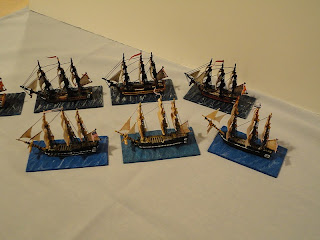 Here's a close up of the US fleet.  These models feature brass sails rather than the one piece metal sail/masts on the rest of the fleet.  Each sail is shaped and applied as a separate part.  It's one of the most challenging modeling tasks I've ever tried but the outcome is worth the effort.  The entire US fleet will feature brass sails. 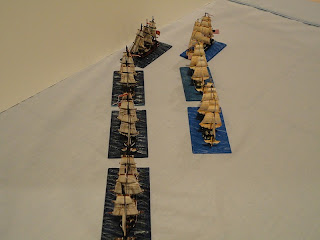 I always liked the head on shots of sailing ship games, so I threw one in here.  These Langton's look fabulous on the table. 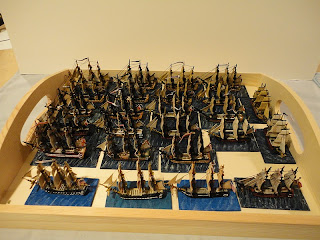 Lastly, here are the ships all in "port" and awaiting to be put up.  That's about a year's worth of modeling efforts sitting in a single tray!  I haven't figured out a way to transport these models safely.  Once I do, I will plan on running a sailing game at one of the HGMS east cons (Fall-In, Cold Wars or Historicon).

SAGA - Yet another project? 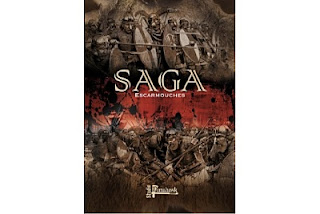 On a whim, I decided to pick up the new Medieval Skirmish ruleset "SAGA" from Ernie over at Architects of War.  I must say after a quick read that the rule system is very intriguing and the activation mechanism very clever.

The game revolves around war bands of 30-40 figures that are organized into units of 4 to 12.  There are currently four nationalities (Vikings, Saxons, Welsh and Normans) each with there own unique characteristics.

Yet another project and wargaming period may be daft but I am very tempted to paint up a Viking Warband since I already have a box of the plastic Vikings from Gripping Beast.

Must stay focused, ships to  finish....

Must stay ummm what was that?...

Progress on the Alabama and Kearsarge 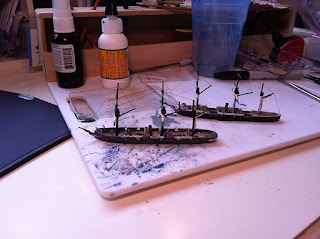 A little more progress on the CSS Alabama and the USS Kearsarge - both models have been sealed and the basic rigging has been added.  Since these models are destined for the tabletop, I tend to prefer a light rigging scheme as that's easier to repair fro the inevitable gaming mishaps.  I also need to add the flags but that's a relatively simple exercise. 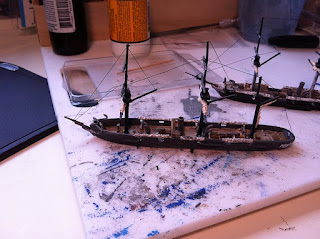 A close up of the Alabama.  I like the level of detail that a 1/600 ship model can provide. 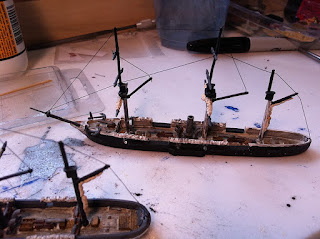 Ans a cose up of the Kearsarge.  Both models are from Thoroughbred Figures and are of exceptional quality.  They do take a little skill to assemble and paint but I think the end results are well worth the effort.

I'm not sure what's next on the painting / modeling agenda, but I know I've got several nagging items to finish up on some projects before starting a new one.
Posted by jmilesr at 6:56 AM 3 comments: 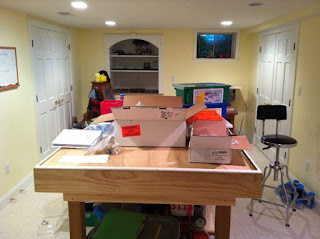 Well it had to happen - the gaming room has transformed into a robotics room as my son's robotics team starts it's competition.  Given the success we had last year, I'm now coaching two teams which will be a bit of a challenge (think Varsity and Jr Varsity).

The game table is now serving as a build table but hopefully I'll be able to sneak some quick games in every once and awhile. 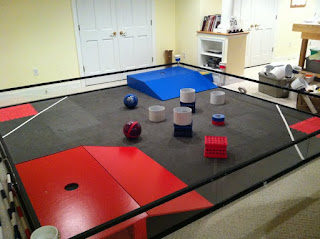 Here's the field for this year's competition - there are bowling balls we need to move around and the primary scoring mechanism is placing racquet balls in plastic creates and then stacking the crates onto top of one another.  There are 100 racquet balls in play at one time (they start in the cylinders and the 'bots need to knock them over to get at them.  12 of the racquet balls will have a magnet hidden inside that you need to detect (by building a magnetic sensor, of course) and placing them in a separate goal. 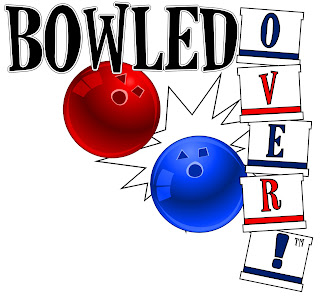 Here's the logo for the game - it's a really good challenge and both my son and his teammates are really charged up for this year.  You can learn more about the competition using the following link:
USFIRST ROBOTICS/FTC

There's a slide show on the website and the third picture is of my team at the World Championship last year.
Posted by jmilesr at 4:37 PM 3 comments: 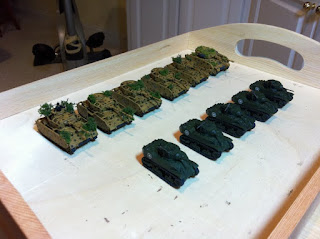 The two tank platoons that I was working on are now complete and sealed.  The front one consists of 5 Battlefront Stuart models and the rear are 5 Panzer IV models from the Plastic Soldier Company (PSC).  I know there are six Panzer IV's in the picture - the one to the extreme right is a Battlefront Panzer IV thrown in for comparison. 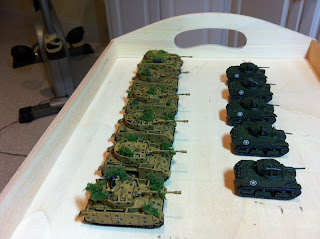 I decided to keep the Stuarts rather plain and didn't add any stowage details.  My rationale is hoping to able to use the models for either British or US forces.  I'm planning to add a British late war rifle company to my allied force. 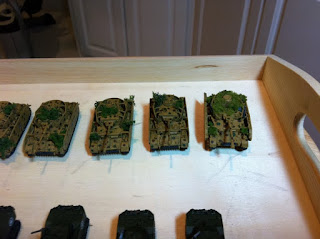 Here's a close up shot that compares the Battlefront Panzer IV (on the right) to the PSC version.  As you can see the Battlefront model is a bit wider and slightly longer.  The biggest source of the width variance are the side shields which hang out from the model rather than just attach along the side.  While the Battlefront method of attachment might be more "realistic", it's also subject to a lot of table top breakage, so I prefer how PSC just glues the things along the hull. 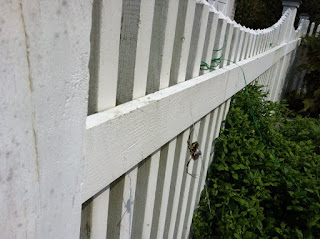 Oh yes, Hurricane Irene did a number on our garden.  I'd say we lost over half of our plants including most of the tomatoes - :(

On the plus side, the storm seems to have been a boon for the insect life as we are seeing lots of Praying Mantis and even Shelob returned to another spot in the Garden.  I believe the unfortunate victim the spider is focusing on is a 28mm Frodo figure from the GW War of the Ring line. 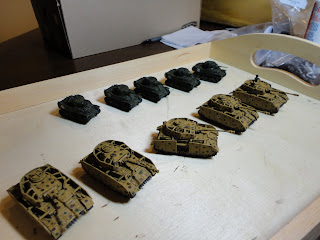 This post features a return to 15mm WWII and shows my progress on two tank platoons.  The German platoon is 5 Panzer IV's and the American are 5 Stuarts.  The Stuarts are Battlefront models and the Panzer IV's are the new Plastic Soldier Company (PSC) models that I picked up at Historicon.  These models are about 80% complete as I haven't finished detailing the models or sealing them. 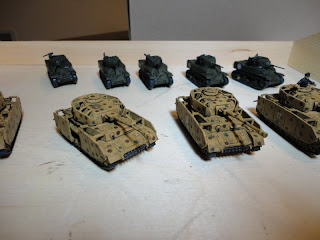 A few close up shots of the PSC tanks.  Overall, I'm very impressed with the quality of the models.  You get 5 tanks per box for $26.50 and each sprue allows one to build 3 versions of the Panzer IV (short barrel, long barrel, long barrel with skirting). When assembled the models look great and are very easy to paint.  I've seen other blogs described the tracks as a bit fiddly to put on (they come in an upper and lower section).  The trick with the tracks is to test fit to make sure you know the front and rear orientation - it's not the easy to spot when just looking at the parts. 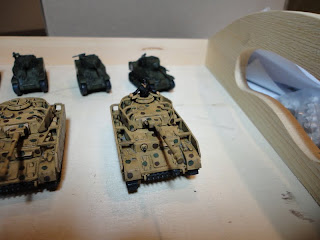 I find plastic to be a lot easier to work with than resin and it's much easier to make conversions or make objective markers out of the kits.  The hull details are a tad less exacting than the battlefront resin Panzer IV's bit it really isn't noticeable.  The models are sized to work alongside their battlefront counterparts. 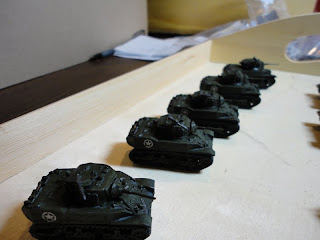 While the photo is horrible, I also was working on 5 Stuart tanks (Battlefront mini's).  I've been listening to the accolades placed on Stuarts from various versions of the WWPD podcast so I decide to jump in an finish up a platoon that I had assembled and primed over two years ago.  Like the Panzer IV's above, I still need to finish up the stowage details and then seal the minis.  They should be on the tabletop in a week.