Historicon is coming up and with it, my annual buying binge in the Vendor's hall, also known as the "Pit of  Financial Despair" by my lovely wife.  Rather than fall victim to the wily marketing pitches and glamorous vendor "super-model" spokespersons, I thought a little preparation would be in order.  I've got my eye on the 28mm Warlord Imperial Romans, but need some advice on an ancients ruleset - hence the poll to the upper right of the blog.  My son has gotten into, shudder, GW's Warhammer and is building a chaos army so I also plan to use my future stout Romans to battle him as a stand in fantasy force.

I really like the Warlord Romans, but am not that interested in Celts as foes - any recommendation for 28mm foes such as Parthians or others would be appreciated.

One note of Historicon, I think I may be one of the few, but I still wish it was being held in Baltimore - I could have traveled to and stayed on my boat rather than a 2hr car ride and hotel.   Perhaps "The Wire" wasn't the tourism boom Baltimore hoped it would be?
Posted by jmilesr at 7:12 AM 10 comments: 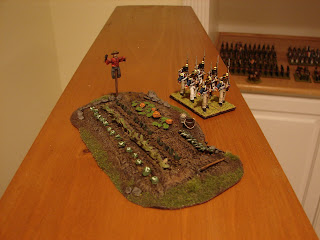 I was recently asked by Ernie, over at Architects of War, to do a test build of some of one of his new scenery products, "the Garden".  It's a nicely done kit that consists of a resin base, 8 castings for crops, a bucket, seed bag, hoe, and a scarecrow.  To the left is a picture of the finished product with some 28mm Perry French next to it for scale.  The kit also comes with a very nicely done instruction manual (7 pages) and a plastic pipette for applying diluted glue.

The quality of the resin casting was superb, I couldn't see any bubbles and just needed to trim some very minor flashing off one side - it required only two cuts of the Xacto knife to clean up. 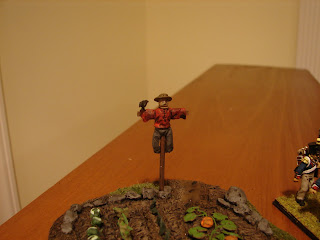 The metal castings were nearly flash free - the only thing that needed to be cleaned up were the casting stringers at various points - I'm sure there is a better technical term for those!  I really like the scarecrow casting - it adds a nice but understated bit of whimsy to the piece.  The crop castings were also well done.  The crops in the garden are (from left to right in the middle and bottom pictures), a row of cabbages (cast in the resin), a row of tobacco, some carrots, a pumpkin vine and some zuchini.

The instruction manual was very well done and serves as a great tutorial for how to build scenery.  I picked up several dry-brushing techniques reading them.  It's rare to see a manual as informative as this one in any kit these days. 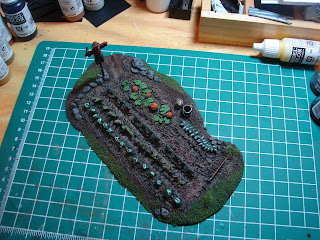 I think this type of scenery piece has some uses in skirmish gaming as an objective for marauders or forage parties to seize.  It can also serve as an "atmosphere setting" for larger, set-piece battles.  All-in-all, I really enjoyed assembling and painting up the garden and look forward to getting it on the table in the coming days.  I would recommend taking a look at the Architects of War website.
Posted by jmilesr at 9:15 PM 6 comments: 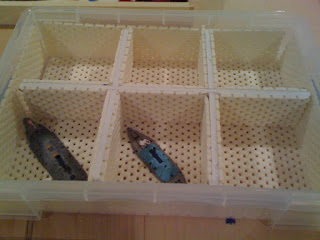 An alternative title for this post might have been "Lemonade from Lemons".  Yesterday, my son and I finished cutting and installing a carpet pad and rug that my wife recently acquired.  My retirement sailboat continues to get shorter and shorter, but I digress.

Anyway there was some carpet padding left over - 2, 12'x1' strips and I thought it might be useful for the hobby.  The carpet pad is foam based but seems to grip objects fairly well, which hopefully can reduce transit damage. 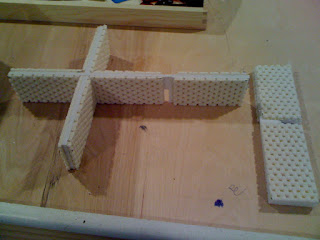 The joinery for the dividers are simple notches as they are simple to cut and allow for dividers to be removed to accommodate larger models.  Total construction time was 30 minutes but about half of that was me thinking about what to do.  Since everything was made from scraps the total cost of the project was negligible.  The plastic box is made by "Really Useful Boxes" which I find to really useful in figure storage (forgive the pun).

Out of curiosity, I called the oriental rug store and the owner indicate that he also has padding that is not perforated and I was welcome to rummage through his scrap bin.  I was thinking that foam padding might also make good flexible roads.  I'm not sure how the padding will hold paint / flock, but who can pass up the opportunity to root around a rubbish bin!  I'll let you know what I find.
Posted by jmilesr at 8:55 AM 1 comment: 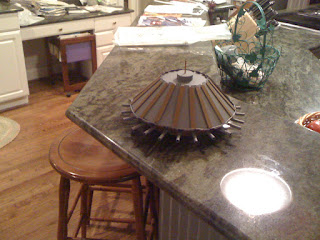 My son had a school project to make a model out of one of Da Vinci's inventions.  He chose the tank and you can see the results to the left.  The project was for his French class so I'm not sure why Da Vinci, other than he did live in France for a bit.  Oh well, I don't get the new math either.

Sean is planning to use the tank with his warhammer armies so he'll be concocting some rules over the weekend.

The tank is made from a disposable pie tin and came out very nicely.  It's also nice that my frequent justification for wargaming expenditures - "it's educational" actually has some merit to it now!
Posted by jmilesr at 9:01 AM 6 comments: 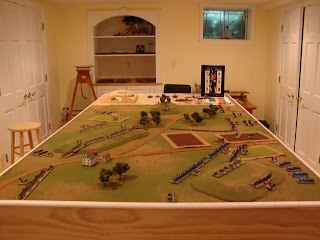 I've made a good bit of progress on building out my collection of 6mm ACW figures and terrain.  The picture to the left shows a test game I've set up to get a better understanding of the Black Powder ruleset.  The painted Union forces consist of 28 infantry regiments, 4 calvary regiments and 20 artillery batteries.  Each base equals one regiment or battery.  The Confederate force is a bit smaller, with 24 infantry regiments, 4 calvary regiments and 14 artillery batteries.  It's a total of 1,852 painted figures!  This force size allows for games pitting 2 Divisions for each side against one another. 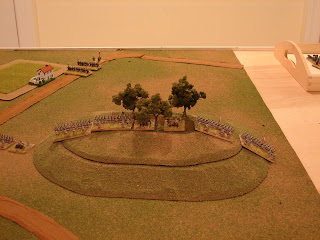 This is a picture of the Confederate left flank, which is anchored on a wooded hill and is defended by a brigade of infantry and 2 batteries.  A calvary reserve can be seen in towards the rear. 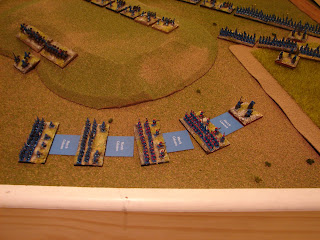 I'm using regiments as the base unit.  Normally with Black Powder, each unit would consist of 4-6 stands that can be arranged to form columns / lines / squares etc.  I wanted to keep the base unit fairly small (60x30mm) so there are no individual stands. To compensate, I made up some formation counters for march and attack columns.  While not that attractive, they are clear and serve to space the units out accordingly.  The picture above shows a Union Brigade in March Column moving up to support the developing attack in the center. 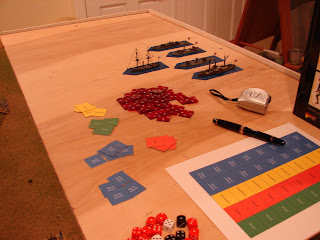 I also made counters for other Black Powder specific status levels such as "Dis-Ordered" and "Shaken".  The red squares with numbers will be used for casualty markers. 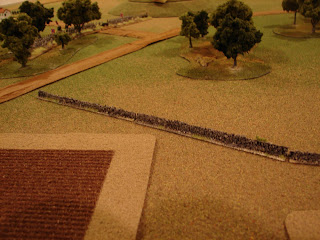 The scenery has been enhanced with my first tries at building 6mm "scale" forest and wall sections.  The forrest are made using 1"-2" high Woodland Scenics tree armatures and clump foliage.  I also tried my hand at making stone fence sections using thin plastic cut in 4mm high strips and glued to a base.  The wall section is N-Scale railroad ballast that's attached to the plastic strip with white glue.  I spent about 45 minutes planning and making the 3 120mm sections and I think they came out pretty well.  I add some more later this week.  I doubt I'll try to make split rail fencing as that may be too small for me. 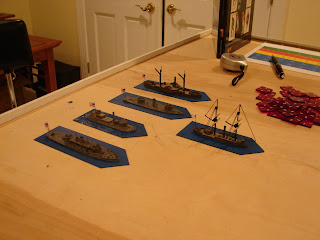 Lastly, there was a small bit of progress on the naval side as I based the ships.  I used a pointed base layout to help players readily understand where the bow is - some of the ironclads are a bit hard to tell. The shortest base has some gloss medium stippled on as a test to simulate waves and such.

The play test today went well, but it wasn't a full battle - just a bit of pushing bases around to get a better understanding of the rules.  I'll be hosting a few games later this summer so it helps to know the rules.  More importantly, I really need to get a firm grip of the BP rules by July as I'll also be helping my friend, Ernie, stage his Black Powder game at Historicon "Black Powder in the Peninsular".  Heres a link to his website that describes the game: