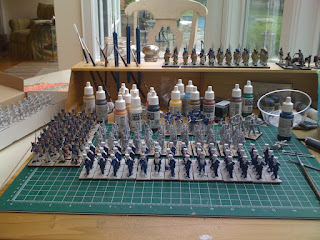 I received part of my recent order from Foundry a few days ago (the guard and light infantry battalions) and got right to work cleaning and priming the figures. I found the quality of the figures to be very good. You can see the Guard unit in the front of the photo and the light infantry in the upper left. There where no real problems with the guard figures, a a few casting "strings" and some bent bayonets which were all quickly dealt with. The Light Infantry came a bit worse for wear - 4 figures didn't have the pom on top the Shako and I broke off 5 bayonets bending them back. All in all, easy things to fix. As you can see I've started painitng the guard unit and since it's supposed to rain today, I think I'll get some quality painting time in. I wonder if it's a sign of age or advanced "geekedness" that I'm more excited to be able to paint toy soldiers than go sailing today?
While I was waiting out the final hours of the primer curing time, I also assembled my third box of Perry Plastic infantry (just behind the guard unit). I've got one more Perry box on order along with 2 boxes of the new plastic Cuirassiers and that should complete my force for now. 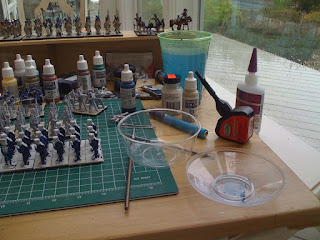 I did discover a useful painting tool by accident yesterday - the plastic container from a Bindi Profiterole dessert makes a great paint palette and water container. The top is cone shaped and has a small inner ring with four gaps that allows one to put the paint on the outside of the ring and the thinner on the inside and then draw the paint through the gaps. It really helps to add more control over the thinning process. The large cup can serve as a water reservoir or bits holder. Of course, I did need to eat the rather tasty profiterole dessert in order to gain access to this little modeling gem. Oh the travails I endure to push forward the frontiers of our hobby.
After some input from this blog and several other sources I have decided to roughly model my force on a specific French formation (division) which will aid greatly in helping me select the correct flags and other minor add-ons. Of course this will also require another trip to the Osprey web site.
Oh well, back to painting imperial guards!
Posted by jmilesr at 8:08 AM 2 comments:

I took the plunge the other day and purchased some more 28mm French Nappies. My first order was for yet one more box of Perry plastic infantry (bringing me to 4) and a pre-order of 2 boxes of the new Perry French Heavy Cavalry - I really like the preview pictures of those models. I then wandered over to the Foundry website and decided to buy 2 french infantry units (one light infantry, one guard) and a guard artillery unit (four guns & crews). I think that will be enough of the Nappy's for awhile - HEY! I hear all of you sniggering right now.
When complete my little force will have:
4 battalions of infantry (36 figs each) (Perry Plastic) - I'm excluding the 3 battalions worth of Victrix that I just can't paint well
1 Battalion of light infantry (Foundry)
1 Guard Battalion (Foundry)
1 Light Cav Unit (Perry)
1 Heavy Cav Unit (Perry)
5 Guns (Foundry / Perry)
1 Command
I'd like to hear any suggestions for additions or changes to the force
I should have a playable force completed in the next month or so.
As for gaming - not much on the historical side and only one 40k game with my son. Now that Sean's back in school his gaming time is a bit curtailed - this homework "thing" is very inconvenient for gaming.
Posted by jmilesr at 6:06 AM 3 comments:

Perry vs Victrix, an evolving opinion

I have been busy working on my 28mm French Napoleonics. As you know my infantry consists of plastic Perry and Victrix miniatures. I've completed 84 Perry's (2 36man battalions plus 12 other figs) and have been working on my third battalion of 36 Victrix figures. I must say, I'm finding the Victrix a lot harder to paint than the Perry's. I thought, at first, it was just the change from painting so many Perry's in a row. After working through my first 18 Victrix, I'm very disappointed with the results, so much so I think the odds are better than even that the manufacturer might be tempted to buy my figures back just to protect their brand image!
The Victrix figures are of high quality but the details are very fine, the figures are "thinner" and the details less raised than on the Perry's. They look great unpainted but I'm having trouble getting the detail painting to look "clean". In fact, the results look like I was painting these guys while riding a roller coaster. My comments are not meant to slam Victrix products, they are good looking figures and fun to build. It's just that the level of painting skills needed to make them look decent are a bit beyond what I can muster. I think I'll put aside the Victix's for awhile and come back to them in a few month. I would not recommend Victrix for 28mm beginners.
Since 3 of my planned 6 infantry battalions were going to be Victrix, I'll need to find some replacements. I polled some of my gaming friends and received a very vocal endorsement for metal Perry or Foundry figures. I've come to understand that both the Perry and Foundry figures are really the same thing since they're both sculpted by the Perry twins - very talented fellows. I think I'll give Foundry a try as they have an extensive range so I can augment my little army with some elite Guard units! They are a bit pricey but what the heck.
I did paint my first horse figures this weekend (2 mounted officers for a command stand) and found that painting horses wasn't as difficult as I thought. In fact it was fun. These figures are the first horses I've painted in detail - I don't count 6mm cavalry figures as there is not a lot there. I've got 21 light calvary figures (Perry metals) to paint so may start them next weekend. I am looking forward to getting a few boxes of the new Perry plastic French Heavy Cavalry when it's available.
Posted by jmilesr at 9:46 AM 5 comments: 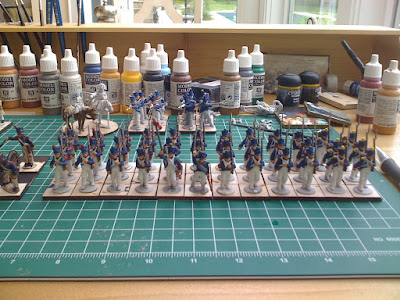 The second of hopefully 6 french battalions is nearing completion. This one is about 80% done. I still need to paint up the shoes and finish some of the finer details (hair, buttons, etc). I manage to paint these figures over the Labor Day weekend so it was relatively fast for my pace. The next battalion will be made up of Victrix figures which I primed a few days ago. I've learned (the hard way) that it's best to give priming coats a few days to really dry so I'll get to painting this next lot in a few days.
You can also see in the background my initial attempt at painting a horse in 28mm scale - I don't know why but I'm not looking forward to painting horsed - oh well it's a skill I'll need to develop, especially if I want to grab some of the new Perry French Heavy Cavalry that's coming out this month. If anyone knows of some good online resources for painting horses and calvary figures please let me know.
Here's a picture of my currently painted French Army: 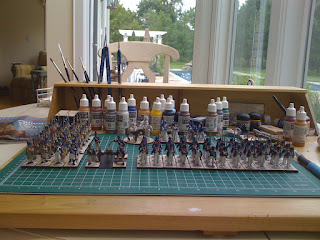 Nothing new to report on the gaming front - I didn't get a chance to play any games this week. My son played a few 40k games with his friends and he keeps working on his Space Marine army. When I get a chance, I'll post some pics of his force.
Posted by jmilesr at 9:04 PM 2 comments:

Surprisingly, August was a productive month painting wise. Unfortunately, despite my faster pace, I seemed to have acquired more miniatures to paint so my net inventory of figures-in-waiting has grown. Oh well, it's a nice problem to have.
Here's what I completed in August:
28mm Napoleonics:
- 36 Completed infantry figures (Perry plastics)
- 90 Partially completed infantry figures (Perry / Victrix plastics)
- 4 Artillery crew (Perry metal)
- 1 6lb gun (Perry metal)
15mm Flames of War
- 2 M10 Tank Destroyers
- 1 Armored car
- 1 Recon section (2 jeeps and 6 scout figures)
- 3 houses
- roughly 10' of bocage terrain
Warhammer 40K
- 6 Eldar Fire Dragons
- 4 Eldar Wraithguard
I realize that some of you may be shocked at the inclusion of the 40k stuff but my son plays it, so it helps me keep up with him and I find there is a bit of creative freedom with painting the 40k figures. There aren't a lot Osprey "Men-at-Arms" plates on Eldar uniforms for me to follow so I can paint them pretty much anyway I want. Plus, as castings, the quality of the GW stuff is pretty top notch.
As for acquisitions, I've added a good bit to Napoleonic inventory and added, yet again, another scale: 28mm WWII, with the acquisition of a US paratrooper platoon from Warlord Games' "Bolt Action" line. The figures are really well done and I'm looking forward to painting them later this month as a bit of a break from Nappy's. My club has been known to play 28mm WWII so at least there's a chance the figures will see the table. I really like what I see on the Warlord Games site - it's a dangerous place to go if one has a credit card in hand!
As for my goals for September, I'd like to complete at least 2 additional French infantry battalions (72 figures total), a light calvary unit (24 figures), a command base (2 figures) and an artillery limber. We'll see how I do.
Posted by jmilesr at 6:17 AM No comments: