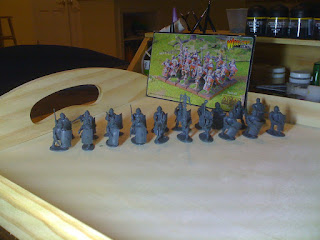 The first batch of my Warlord Imperial Romans have been assembled and will be primed later today.  These lads are the Roman "Veterans" and were very easy to assemble even without Warlord's rather annoying aversion to instructions.  There was some minor surgery to the figs to match up the figures with sword drawn to empty scabbards.  A little work with the x-acto blade and "ta-da" an empty scabbard. 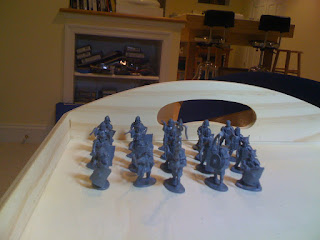 I like the detail on the figures and think they should be a lot of fun to paint.  Due to my recent poll and conversations with some friends I'll be basing for WAB and will likely use the formation in the second picture to take advantage of the rank bonus.  Still trying to figure out if I should go with 20 or 24 figure cohorts.  I am looking forward to the release of the Ancients version of Black Powder and it may give WAB a run for the money.

I haven't picked the specific Legion I will be modeling but it will be one from Trajan's reign.  Any suggestions  are most welcome.

As for shield transfers, I think I will be going with those provided from Little Big Man studios.  The Warlord boxes come with transfers which are nice, but a bit generic.

My total force is planned to consist of 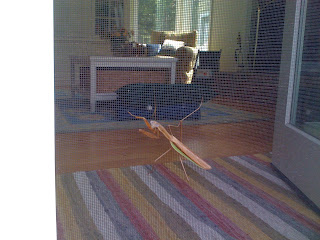 This little guy came calling yesterday.  "Little" may not be appropriate from an insect point of view as he was almost 6 inches long.  I've always liked Praying Mantiss's and thought I'd share the photo.  While I've never seen one thist big before, they are fairly common here in St Michaels.  Unfortunately, there tends to be lots of other bugs for them to dine on.

Not much to report in the Wargaming department.  I've played a few rounds of WWI Naval and have finally started my 28mm Imperial Roman Army (Warlord figures).  I've assembled twenty or so and am still doing research on Uniforms and periods.  I want to model a specific legion.  Any suggestions are welcome.  I've acquired enough plastic figures for a 3,000 - 3,500 point army using Warhammer Ancient Battles (gotta love the cost of plastics).  The only metal figures I've got are some calvary and the missile troops.  Now for my standard plug - I got all my troops from Architects of War, and I highly recommend them - the service was very fast and they have just about all the Warlord plastic and metal figures in stock, which is more than I can say for most other US based online retailers.  AofW also just became the exclusive US distributor for Gripping Beast and those Vikings look rather nice.  Lets return to my normal ramblings.

There will not be much in the way of battle reports for the next three months as the games table has been transformed into a build area for my son's robotics' team.  I've got high hopes for this year as we have most of last years team members and some new one's whose fathers are (1) a mechanical engineer and (2) and electrical engineer.  With me being an economist my skills are somewhat limited.  Here's a link to the FIRST competition if your interested in learning more.
Posted by jmilesr at 7:48 AM 3 comments:

The Path to Miniature Wargaming

Warning: This post is one of those self-reflective ones that authors tend to love but elicit decidedly mixed reactions from readers.  Read on at your own risk, the blog owner takes no responsibility for any ill effects.

OK with the legal mumbo-jumbo out of the way, lets get on with it.  The other day, I was talking with a friend and we were both reminiscing on how we got into the hobby.  We're roughly the same age (late 40's) but come from very different backgrounds - my friend from somewhere near "Thunder Road" in the "Wilds of Jersey" and me from the deep south of the US, Bayou La Batre, Alabama (yes, there is such a place - it was in the movie Forrest Gump, so it has to be real).  While our backgrounds are very different, our respective paths to gaming where fairly similar.  That conversation made me wonder if it's a similar path for other gamers.  Now I'm not saying gamers are a homogenous group, but after experiencing a large number of "our kind" at Historicon this summer, I have noticed that the population had a large number of , ummm - shall we say, "similar properties".  Rather than discuss those, I'd thought I'd lay out the winding course I took to gaming:

Late 60's to the  mid 70's:
- Airifx 1/72 figures and Rocco Minitanks
Aside: I never played with any rules, my friends and I would set up our unpainted troops and throw or shoot stuff at them - last man standing wins!  At first we used rubber bands, then sling shots and finally ended up with bottle rockets.  During the heat of battle I learned the true value of suppressive fire on one's opponent rather than his troops.  I must confess that, as a youth, I was drawn to things that "blowed up, real good" and being in the deep south were things like safety regulations are viewed as Yankee impositions, access to fireworks was both easy and cheap.  Ahhhh, the glorious stupidity of youth.

Late Seventies to the Early 80's:
- 1/35th military scale models
- Board war games (SPI / Avalon Hill) - did anyone every really finish one of those monster SPI games?

Late 80's through the 90's
- I got out the modeling hobby to pursue silly things like climbing the corporate ladder and making money.  I also managed to get married and produce (with my wife, of course) a son - both of which were the most noble and finest accomplishments of my life.  (OK that was a bit maudlin, but it's my blog)

2002
- A return to modeling via scale model rail roading.  Now I have a confession to make.  The original entry into scale model rail roading was my son's Christmas present when he was 8 - an HO scale electric train.  We spent about 4 years building various layouts but both lost interest because after your done, all the trains do is go around in circles.  Some people like to simulate railroad operations with their layouts but playing at working in a distribution center never really appealed to me.

2007
My son discovered something called Warhammer 40K (via one of his friends).  Here was a hobby that combined the best of the rail roading hobby - scale modeling with both a sense of competition and the social aspect of gaming with others.  I was hooked and a new hobby was born.  I was also lucky enough to stumble onto to a local gaming group (ECAMGA) that is sponsored by my friend Ernie (mentioned at the top of this rambling diatribe) which really exposed to how a top-of-the-line gaming experience should be the setting and ambiance is as important as the game itself.  There's a bit of theater to staging a good games night that makes hosting an event both fun and challenging.

2010
My son being a teenager (15) has lost interest in modeling, but still likes to game.  He's more interested in competitive sailing (my other hobby) so I can't really complain.  I'm still going strong and now have a dedicated (liberated?) game room and armies/navies for a bunch of rule sets: Flames of War (US and German), 28mm French Napoleonics, 6 mm ACW, ACW Ironclads, WWI Naval, 1/1200 Sailing ships etc).  I am about to embark on yet another period - ancients via Warlord's Imperial Romans - every gamer needs a Roman Army, right?

While I enjoy painting figures, my favorite aspect of the hobby is terrain making - perhaps that's a sign I'm a recovering model rail roader?

Let me know your path into the ranks of the lead-addicted.
Posted by jmilesr at 7:49 AM 9 comments: 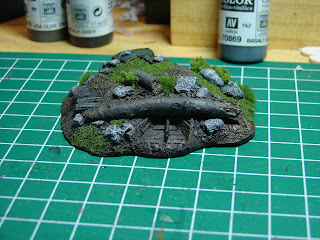 I just finished my 28mm Machine Gun Nest kit from Architects of War.  A played a game a few weeks ago and had to attack one of these guys - let's just say the dice gods were angry at me.  The Kit consists of 2 resin pieces - the base and the top.  It also comes with 2 machine gun options a german version and a water cooled one that can be used as either a Browning for WWII or a generic maxim gun for WWI. 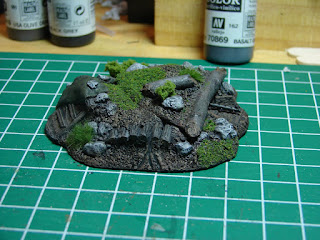 The casting of the resin piece is very nicely done.   There was no flash or any clean-up needed.  I primed the whole think black and then dry brushed all of the main colors on.  A little bit of ground foam and other scenery bits and there-you-go. 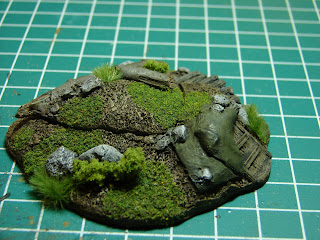 Here is a photo of the nest from the rear - kind of reminds me of a hobbit home.  I was going to paint a camo pattern on the tarp that covers the door but got lazy. 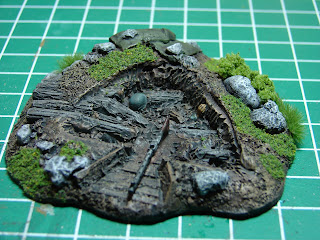 The top of the machine gun nest is removable, which one uses during a game to so the nest after it's been taken out (which I was never able to do in the game).  There are some nice details in the rubble which add some real character to the completed project.  I had a fun time completing the kit and highly recommend it.
Posted by jmilesr at 3:26 PM 3 comments: