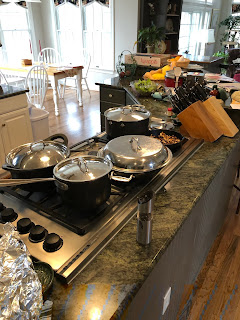 My favorite day of the year is Thanksgiving and my wife is cooking up a storm. 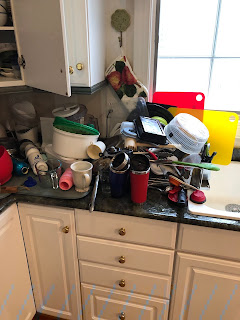 First wave of the dishes have been done - these are just the "prep" dishes - there will be more, a lot more.... 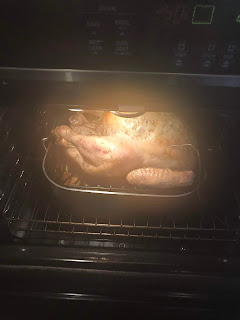 The bird slowly cooking in the oven.

Have a happy Thanksgiving everyone.
Posted by jmilesr at 3:39 PM 4 comments: 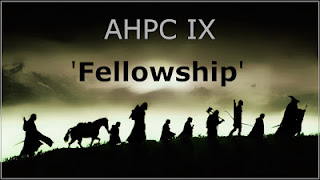 Notify the authorities, alert the media, ring the church bell and bang the gong - Challenge Season is upon us.

My favorite Hobby event of the year is just around the corner - The Analogue Hobbies Painting Challenge!  This year is the 9th incantation of this arcane even and it has been christened "Fellowship".  The Challenge begins on Dec 21st and runs for the next three months during which 80 miniature hobbies will be ensconced in their hobby rooms feverishly painting away.  There are a handful of spots still open so register quick! 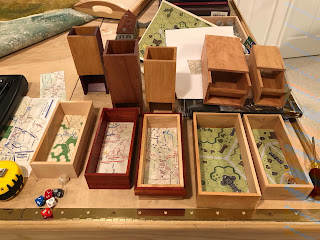 The dice towers are nearing completion and should be in the post by Monday.  The towers themselves are all done and have had 4 layers of lacquer applied.  I think they look good.  I did find the trays a little stark and decided to add a little flavor by mounting some maps.  The internet i a wonderful thing if one Googles "Wargaming Maps".  I picked some sections at random and carefully cut them to size.  There just placed in the trays for now. 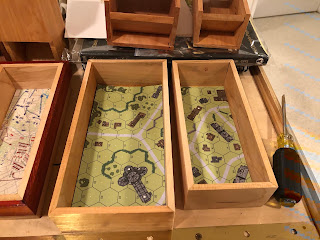 Squad Leader was one of the formative games in my entry to the wargaming hobby so I was especially happy to find some map images from the game. 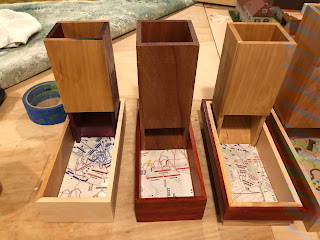 There are also some ACW battle maps.  These are the ones created by the Civil War Preservation Trust and are both very nicely done and useful for laying out a battlefield.

The final step will involve carefully mounting these maps to the tray bottoms - I'll be using a spray on contact cement.  Once mounted and cured, the map images will  be covered with 4-5 layers of Modge-Podge to protect them from the wear and tear of dice rolling.

I "stole" the image idea from the 6mmacw.com website.  Here's a link to the site's article on Dice Trays.

My next hobby related shop project will be fairly big - but more on that in a future post......

By the way, I'm not sure why my I-phone camera is adding a striped bar across the lot side of the image.  Surely it can not be due to user error!
Posted by jmilesr at 7:49 AM 5 comments: 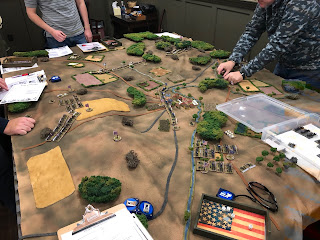 Last Monday the club got together and put on a really fun ACW game, using the Alter of Freedom ruleset which happened to be written by the game host, Greg.  These are "Grand Tactical" which emphasize command control issues.  It was my first time playing them and I was very impressed.

The game depicted the Battle of Chattanooga in 1864 which has a besieged Union Army under Grant trying to Break out.  The Confederate force is commanded by Braxton Bragg, who had a checkered reputation...

The first picture show the the start of the campaign with the Union to the right and the Confederates to the left.  My command, Sherman's Corps, is in the lower right. 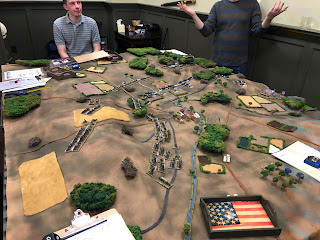 Alter of Freedom uses a very intuitive command point system where you bid a set number of command points to get a division to move.  Want to make sure the division moves - bid a larger number but that means some divisions will not activate.  The turn clock moves down and if you bid a low number you make not get to move.  It took us a few turns to get the hang of the concept but it really does reflect command friction in a great way that is not entirely dice driven.

After a couple of turns my troops finally made it across the river and began our assault. 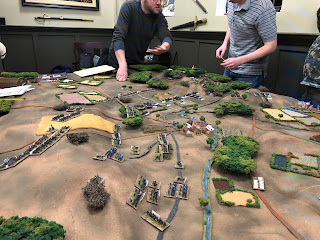 Josh's Union center got off their attack before mine could get organized and you can see them moving up on the Rebels.  On our far right flank was a furious fight for lookout mountain which saw a determined counterattack by the rebels that caught us a bit off-guard. Command is represented by the army commander (Grant in our case) and corps leaders -  In this game Grant had 7 points which he can allocate to any other corps.  My General, Sherman didn't have a fixed number as, historically, in this battle he was off his game).  I had to roll a D6 and that was how many command points I got.  lets just say that Grant gave me a lot of points during the game.  In order to ensure a division moves you need to allocate at least 5 or 6 points so you can see how constraining it is.  I elected to leave my smaller, two brigade, division behind and just attack with the other two.

Commanders also get personal traits which can be +'s or -'s.  In my case Sherman got 2: "inept" and "hesitant", which we're not all that positive.  Even with a "challenging" commander profile, I found that game really fun.  To be honest, I think it made the game even more fun. 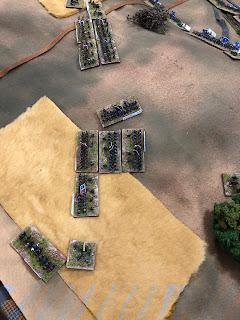 My left most attacking division goes in, supported by the armies lone cavalry brigade. 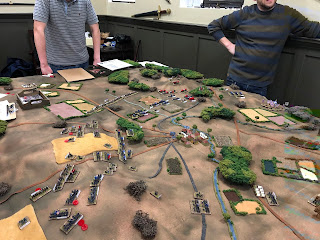 A shot of the battlefield towards the end of the game 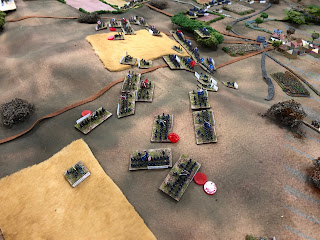 My attack pushed the rebels off the ridge but my 2 divisions where pretty beat up.  The game ended after the 9th turn and was declared a very narrow Union victory.

Greg has down a much better write up of the game over on the club's blog.

I highly recommend the Alter of Freedom rules - check them out and consider a purchase, I think you'll like them a lot.
Posted by jmilesr at 7:45 AM 6 comments: 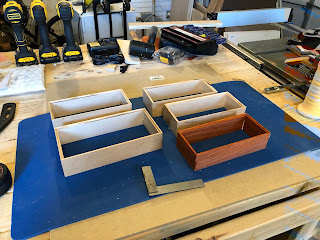 For various reasons, I ow a number of people some dice towers and this morning I finally decided to stop being a welch and started building the towers.

I got to use my new silicon glue-up mat from Rockler and I really like it. 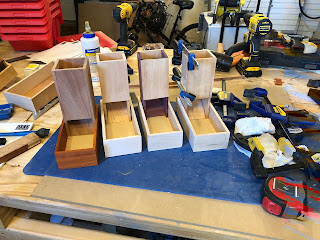 I'm using a combination of hardwoods for the towers - walnut, cherry, Paduak, Purple Heart and Mahogany.  I'd like to say its all do to a very elaborate plan but it's really what I have in the shop.

I made a good bit of progress this am and the four towers are basically assembled and glued together. 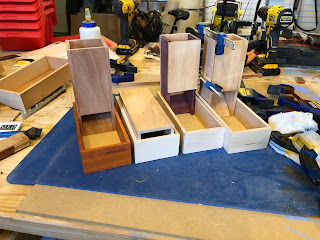 For storage thy nestle together as the demonstrated in the last photo.  Next up is sanding, finishing and some special details but these all should be off to their new owners by the end of this week. 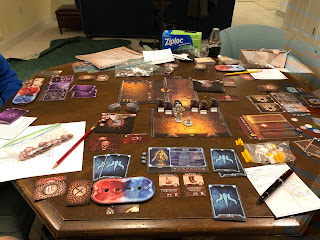 Chris, Eric and I have embarked upon a campaign of Gloomhaven - world's heaviest game.

We manage to learn the rules (well most of them) and play the first mission.  It was really fun and a I'm amazed at how all the parts seem to work together well.  There are A LOT of parts!

Posted by jmilesr at 3:24 PM No comments:

Email ThisBlogThis!Share to TwitterShare to FacebookShare to Pinterest
Labels: Gloomhaven

ProTip #1: Put the spray paint cap back on the right spray can! 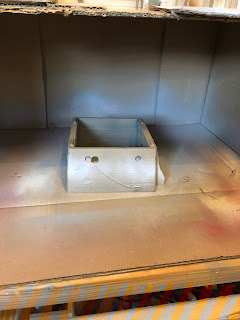 This post is the first of a series where I impart upon the world my collective wisdom about the hobby.  Yes, yes I know that this is something all of you have been waiting for with baited breath - or dread, not sure which.

Sadly, my actual supply of "wisdom" is very limited, so I'll be going with posts about hobby mistakes and what I've learned from them and how to recover.

These posts will occur as the actual event unfold and, given my track record, there will be a lot of them.

Today's post is about keeping track of spray paint colors - always put the cap that indicates the color (or lack of color if it's a matte sealer) back on the can.  NEVER trust your memory that "yes, this is the tan spray paint - I'm sure of it.

I tend to batch up priming models / terrain pieces and often use multiple colors.  Every now and then I get get lazy and don't replace the cap on a can I know I'm going to use again.  The result of said lapse in judgment is pictured above.  This has also happen with white primer coat being mistaken for matte sealant.  On some once very nicely painted 28mm Perry French Dragoons.  I wasn't in the right emotional state to take pictures of that sad day, but it is remembered in the Lair as Black Sunday March 2013.

How can you avoid the heartache of spray paint color mismatch?

1) I now only buy the small cans of dull coat from Testors so I can easily discern what is spray paint vs matte coat.

2) Put the color code caps back on the damn cans in-between use,  This is revolutionary thinking but is worth the risk of being accused of blasphemy.

3) For those of you who can't abide by rule #2, only buy one color of spray primer.  As with nuking form orbit, it's the only way to be sure.

On a more serious note, I really enjoy the artistic aspect of this hobby but sometimes fall into painting process ruts.  I often need to remind myself that trying new techniques keeps the creative post of the hobby fresh but comes with an increase in the rate of mistakes.  Since 99% of mistakes in this hobby are recoverable its more than worth taking that risk.  As for the other 1% that are unrecoverable - get over it - it's just Toy Soldiers!

I suspect another hobby disaster from yours truly are just around the corner.... 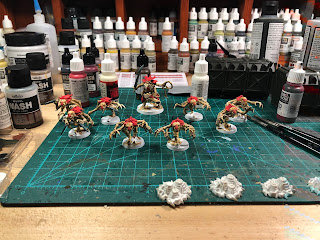 Kill Team fever has stricken the Lair, with another Kill Team on the painting bench.  There are some Tyranids.  The KT force comes with 8 gene-stealers and I've augmented the group with a Warrior how adds a bit of "shooty-ness" to what is a close combat force.

Like the Space Marines, these are a blast to paint up and look pretty good with just a handful of colors and some shading.

I thought I had given all my 40K stuff away to a friend whose son was getting into the game - I'd rather see someone else have fun with the mini's rather than keep them incarcerated in my closet.  Apparently, I didn't send everything as I've stumbled across a few additional boxes of space marines and Tyranids - enough for a few more KT's
Posted by jmilesr at 5:39 AM No comments: