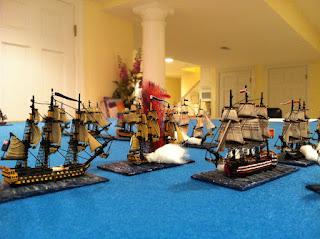 Last night my son and I played a few turns of using the "Trafalgar" ruleset to refresh all the basic concepts.  Trafalgar is a relatively simple ruleset that gives a pretty good feel for the age of sail.  It does make for a pretty game with 1/1200 Langton miniatures. 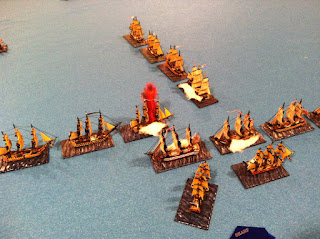 We didn't set up a scenario in detail.  Rather it was "this" group of ships smashes into "that" group.  I did learn that putting a British 3rd rate in the lead and having it make first contact with the Santisima Trinidad and Bucentaure (1st and 2nd rates) isn't conducive to it's long term flotation viability. 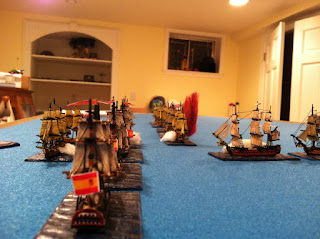 One trick we have learned with the game system is to use specifically colored dice for the different gun classes as they have various range modifiers.  For us it's white for light guns, red for heavy and blue for carronades.

I'm trying to decide what type of game I should GM at Historicon this year - it will either be Hail Caesar or Trafalgar.  The requirements for Trafalgar are much easier to transport but those ship models are not the most durable - decisions, decisions. 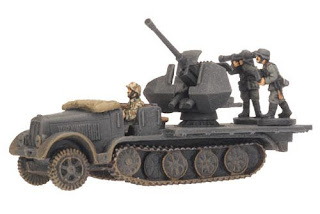 Wow - Battlefront's customer service team has outdone themselves again.  I had recently purchase a pair of German SdKfz 7/2 anti aircraft half-tracks and noticed on Saturday that one of the kits came with 2 right side track pieces rather then one left and one right. (By the way, the picture is from the Battlefront website and not the one I will eventually build.)

I've had good experience with Battlefront in the rare occasion this has happened in the past so I used their centralized customer service email and sent in my request for a left side track section Saturday evening.  Mid day Sunday I got an automated response saying I was case blah, blah, blah and that they were working on it.  To be honest I was a little worried then given the delay on the auto-email.

I had nothing to fear.  On Tuesday at 9:01am a package was delivered to my home with the missing part.

That's pretty darn impressive!  The email goes to NZ gets routed to the US and the part is sent out to arrive in essentially one business day.  Add that experience to the free FOW 3.0 rulebooks and you've got a superb example of a company that "gets" customer service.

That'll do, Battlefront, that'll do...

Email ThisBlogThis!Share to TwitterShare to FacebookShare to Pinterest
Labels: Flames of War 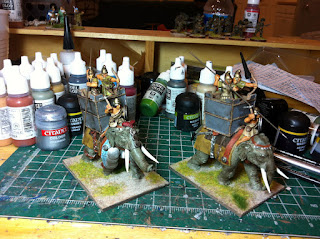 My final entry for the Analogue Painting Challenge consisted of some War Elephants, a Dacian Command Stand and some 28mm US paratroopers (not pictured).  I purchased a pair of 28mm War Elephants from Sgt Major Miniatures at last summer's Historicon and have finally got around to building them.  I think the figures are from a company called Molon Labe. 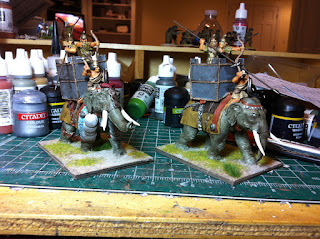 The kits were very fun to build but a bit of a challenge to paint, which usually ends up in a fairly rewarding experience.  I like how the Elephant skin came out.  The figures were primed with white and then block painted.  I used Vallejo "Grey-Green" for the elephant skin and then applied the GW wash "devlan mud".  I may redo the howdah's in a lighter color as the grey may be a bit too dark.  The 2 man crews are based on separate 20mm square bases that are trimmed to fit within the Howdah and makes them removable.  This will allow me to build some customized crews fro different Nationalities so that the 'Ellies can serve in multiple armies - what ancient army doesn't need a few more Elephants? 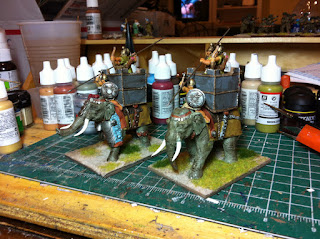 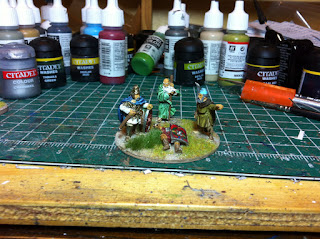 The Dacian Command Stand is meant to be used for the overall army command stand (I used circular bases for command with wider diameters used for higher ranks).  The figures are (from left to right) a mix of Warlord (King Decebalus, his Shaman and a Roman casualty) and Wargames Foundry (Dacian Command Pack).

Now that I've got the wargame table back, I'm itching to get my Romans and Dacians back on tabletop.  I wonder who'll get to use the new "Ellies for the first time????? 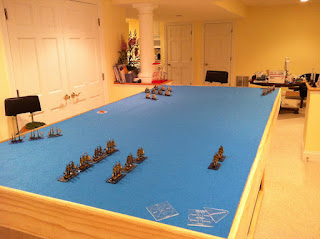 What's this?  A game being set up on my gaming table???

It has been a long time, but it's time for a game.  I'm setting up a game using the Trafalgar rules for my friend Ernie whose been working way too hard.  The game will use my 1/1200 Langton models for a hypothetical clash between a French/Spanish fleet and a British / American one. 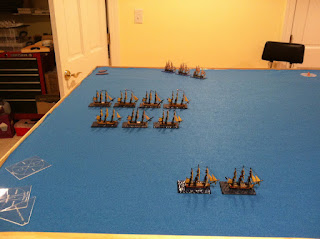 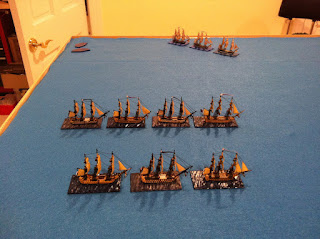 The main British force consists of one 1st Rate, 5 3rd Rate (large) and 1 3rd Rate (small).  That's a very potent force given the quality of the crews.  The Brit;s also have 2 small frigates in a separate squadron. 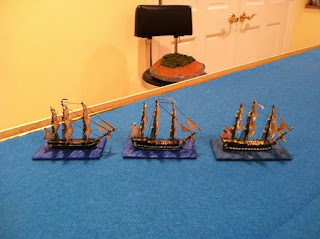 The US fleet is smaller but of even higher crew quality and consists of 2 3rd Rate large and one 4th Rate (the USS Constitution). 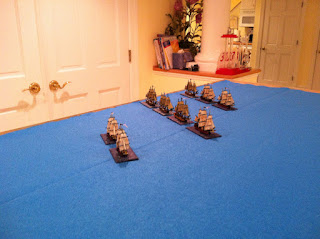 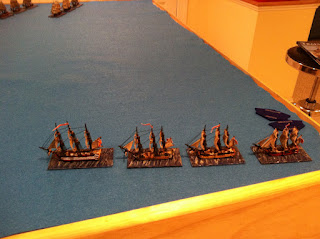 Helping out the French are their Spanish Allies, which are lead by the lumbering but fearsome Santisima Trinidad (a 1st Rate on steroids) and 3 3rd Rates.

I'm still working out the scenario "special rules" and hope to get the game organized in a week or so.

It's good to have mini's back on the table!
Posted by jmilesr at 6:32 PM No comments: 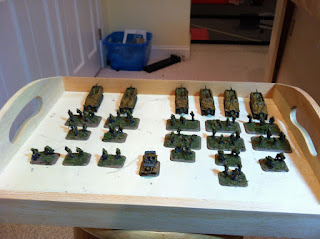 A bit more progress on my Panzer Lehr Panzer Grenadier Company (say that 5 times real fast).  Completed with this batch are the Company HQ, along with Optional anti-tank units and a full Panzer Grenadier infantry platoon. 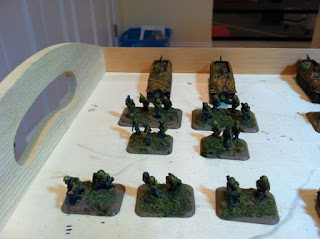 Here's a close up on the HQ section.  I also completed another 3 anti-tank teams to add to my existing panzer grenadier platoon to bring it up to the Lehr TO&E.  The halftracks are from PSC and match almost perfectly with my existing battlefront german halftracks. 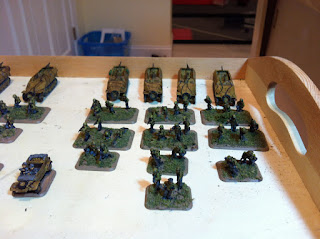 A close up of the panzer grenadiers.  To the lower left is a kubelwagon that I also completed but it goes with the Nebelwerfer battery. 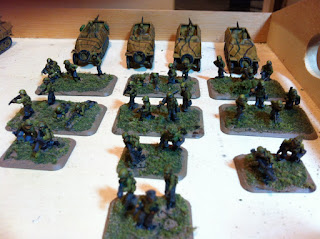 Here's a close up of the infantry - very basic paining and then a wash of Devlan Mud - it seems to work well with 15mm scale figures. 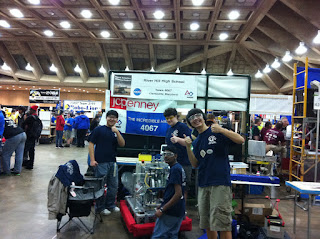 Oh well, back to robotics for the next few days.  My son's team is competing at an FRC event, which involves building fairly large robots.  As a rookie team it's a bit daunting but I think they'll do fine

FOW: Nebs and a Jag 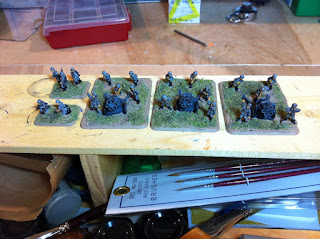 As reported earlier, with the new release of FOW ver 3.0 a return to 15mm WWII was in order.  The first project will be to finish up a 1,750 point German Panzer Grenadier Lehr company.  The artillery support will come from a small battery of three Nebelwerfers which are now ready to take the field. 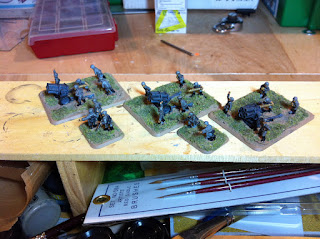 My painting of 15mm figures is very basic - uniform, flesh, boots and weapons then a wash of GW "Devlan Mud".  I usually don't bother with webbing or other details.  Call me a heretic but these guys do pass my 2 foot rule - if they look good from 2 feet, they look good period. 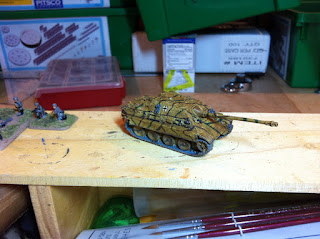 I also finished up a Jagd-Panther model I had.  This is the one that comes in a box set (with a ruined house to hide in.  It's not really in my force list for the Panzer Grenadiers but it was a fun model to build. 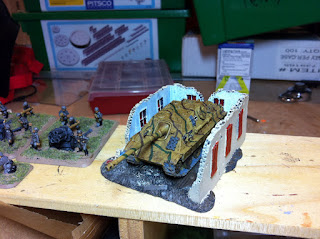 Next up with be the second Panzer Grenadier platoon as well as the company command section (you can see the primed models in an earlier post. All of the half-tracks will be the new Plastic Soldier Company models.  The PSC german half tracks are very good models and I'll likely be using one of the four extra I have to become part of an objective marker.  Once the germans are finished I move on the a US armored company. 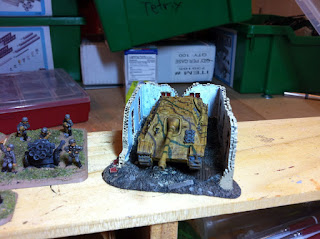 I'm looking forward to some FOW games and may even renew my quest to actually compete in a tournament.
Posted by jmilesr at 6:44 AM 2 comments: