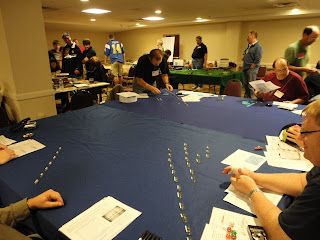 On the spur of the moment, a quick trip was made to attend Fall-In in Lancaster.  I played in one naval game friday night - a re-fight of the battle of Tsushima.  I was in command of a battleship division of 6 of finest ships in the Czar's navy.  I should point out that the Russian fleet roster included 3 "extra" battleships to even things out.  The first picture shows the initial fleet set up with the Russians in the lower center, the main Japanese fleet in the upper right and a squadron of Japanese cruisers shadowing the Russians to the left.  The Russian objective was to exit the left side of the map. 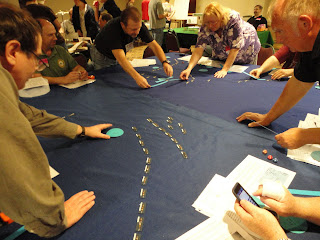 After a few turns the fleets are closing on one another.  We had put a hurt on the Japanese cruisers but were about to feel the weight of the Japanese big guns.  By the way, the Japanese admiral in the purple flowered shirt proved to be a most formidable opponent and her trash talking skills were considerable (in a fun and lighted hearted way).  The way she was rolling dice we were all thinking of bank rolling her on a trip to Vegas. 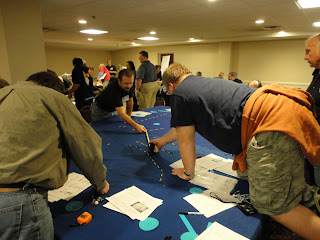 The slugfest continued for a number of turns.  We played on a 10' by 8' table, which is great for a large scale naval game, but can be a bit dicey for such operations as distance measuring and moving the ships! 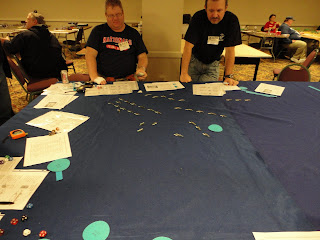 The game was called shortly after this picture.  You'll notice the fleets are significantly smaller and the Russians gave as good as they got.  The Russians managed to exit 10 ships and get a one point victory over the Japanese.  It was both a very close and very fun game.  We were all especially pleased when a lucky critical hit blew up the Mikasa (the Japanese flag ship).  Huzzahh!!!!!! 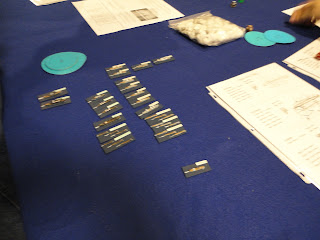 Here's the  tally of sunken ships - the left two rows are Russian and the right side rows are Japanese.  This was, indeed, a very bloody engagement.

Many thanks to Brian DeWitt and the NOVAG gaming club for putting on the game and letting us play with their fabulous miniatures.  I had a blast and look forward to the next game brian might put on.

I will save my thoughts about Fall-In for another post.   It was a bit of a varied experience.
Posted by jmilesr at 1:05 PM 5 comments: 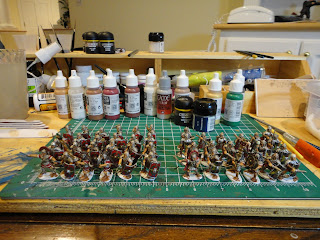 The second Roman infantry unit of my planned WAB army has been painted - it's a "regular" legionnaire unit with 24 figures.  I've used Little Big Man Studio transfers for the shields also. 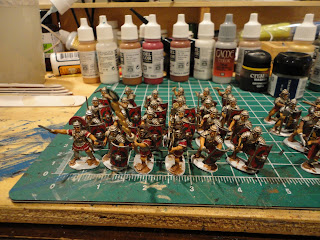 Next is a close up - sorry the standard kind of gets in the way.  These miniatures were painted the same way as the previous unit - white undercoat, block painted medium flesh, red, chainmail and leather.  Once dry the unit was washed with GW Sepia toned washed. 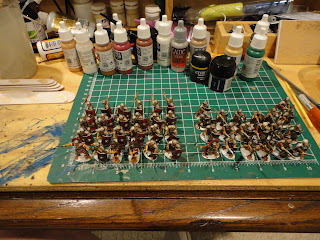 Here's a top down picture.  I've got enough plastic figures to make up 5 Legionnaire formations of 20 - 24 figures each plus one auxiliary infantry unit of 24.  I've been very happy with the Warlord plastics with one very minor exception - the plastic standards are very delicate and I've broken both.  They will be replaced with standards that are scratch built with brass rod and bits once I learn a little more about how Roman standards are configured. 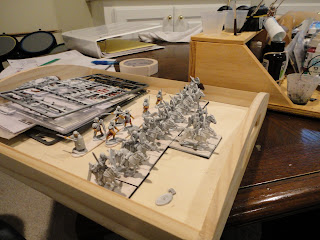 The next unit on the block is some auxiliary calvary - I've got 12 Warlord metal auxiliary cavalry figures assembled and primed.  Well almost 12 - it seems the command blister was missing the upper torso of the trumpeter, which I'm sure will be quickly set right by Warlord and their massive supply chain!
Posted by jmilesr at 5:34 PM 4 comments: 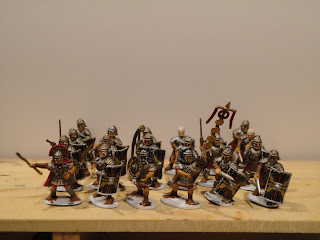 I finished another 12 Romans and so have completed my first first 20 man unit of Roman Veterans.  I think they came out nicely and were a lot of fun to paint.  I just noticed that I forgot to finish the shield trim of one of the legionaries (front row, second from the left) - oops!

All that's left for these guys is to varnish the shield transfers with gloss coat (extra protection),  spray the whole lot with matte finish and then base.  The Little Big Man Studios shield transfers came out very nicely and can make an average paint job like mine look great. 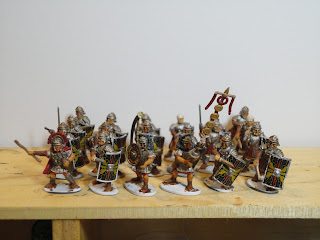 I'm still working on my photography skills.  The first picture was without extra lighting and the second has my "natural light" lamp lit from behind the camera.  I did pick up a new digital camera - a Sony cybershot DSC-W350.  It's a marked improvement over my I-phone which was my primary camera for the past few years. 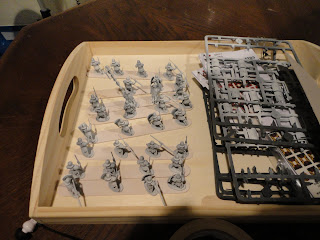 The next unit will be regular Legionnaires and they have been assembled primed.  You can see I've adjusted my assembly technique to leave the shields off the models.  Doing so creates a bit more to paint but makes applying the LBMS shield transfers a lot easier.

To date, the Romans have been my favorite set of 28mm figures to both assemble and paint.  Hopefully in a few months I will be able to field an army for the table top. 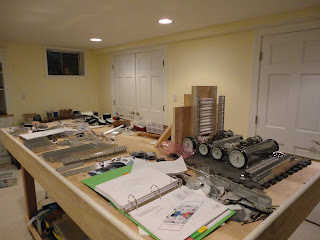 As for my war games table, you can see it's been put to use by my son's robotics team.  It will not be available for proper miniature gaming until late December but coaching the Robotics team is a lot of fun.
Posted by jmilesr at 8:03 AM 7 comments: 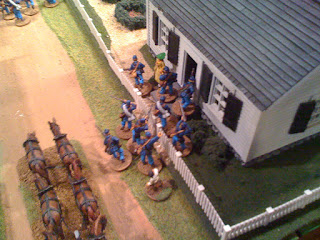 Tonight I participated in another play test of the new ruleset from Architects of War "American Uncivil War".  It's a skirmish style game with a nice measure of John Ford movies and humor.  Yet again, I was playing a Yankee Raiding party and had to contend with an ever growing mob of confederate militia while searching for a hidden store of powder and a spy.  Lets just say neither objective was met so I lost, but I did manage to inflict a good deal of damage on the Rebs.  The first picture is one of my squads breaking into a house to search for contraband (and booze!) 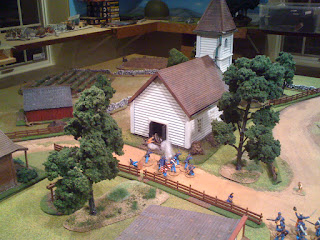 There was a shoot-out at the church entrance where my boys were trying to enter to silence the church bells, which were tolling to alert the nearby confederates.  The confederate who fell at the door turned out to be the spy.  My boys occupied the church and pretty much forted up after that. 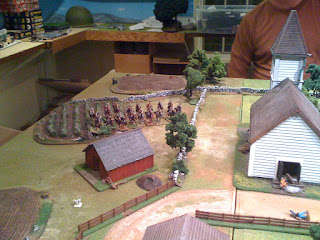 The first group of reinforcements were confederate Calvary who foolishly charged towards the church where my boys were waiting for them. 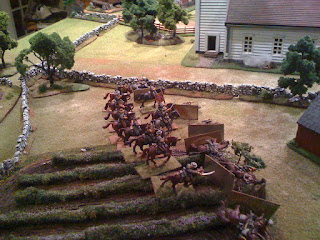 Our first volley caused significant casualties and managed to disorganize the rebs.  Continued fire on the disorganized calvary caused it to break.  Note to self - mounted calvary in the open is a very enticing target. 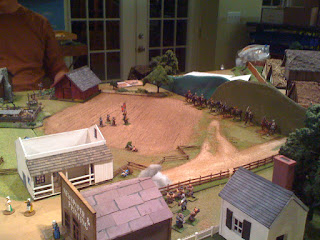 My other squad was holed up the the white house in the lower left but were assaulted on three sides and pinned down - not a good outcome for a raiding party.  The calvary to the right managed to ride past these boys and catch my other troops as the exited the church.  Lets just say it was game over for me at that point.  Still it was a fun game and the rules are evolving very nicely.  I think Ernie's going to have a great game to bring to the market when it's ready.  There will also be a nice line of 28mm character figures to go along with the game that look superb.  Here's a link to some of them 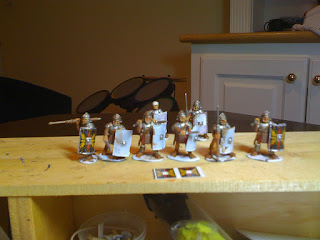 The first eight figures for my Imperial Roman Army are being a painted as a test.  The first six figures were all block painted and then washed with the GW Sepia wash.  The 2 figures in the rear were painted the same way but were washed with Army Painter "Soft Tone".  I've learned from my Napoleonic painting that one gets a much better effect brushing on the Army Painter "dip" and there is a lot less wastage from the silly slinging process.

My friend, Ernie at Architects of War, is now carrying "Little Big Men Studios" shield transfers and I picked up some.  Wow! they were a snap to put on and really look great.  I got the two on in the photo without any issues at all - what a great product.  Of course the whole goal is to ensure people look at the pretty shields rather than my rather pedestrian paint job.

Overall I like how these came out.  I did learn an important lesson in painting these chaps up -  DON'T GLUE THE SHIELDS ON BEFORE PAINTING!  Painting would have been a lot easier if the shields remained on the sprue for a bit longer.  Never-the-less, I liked painting the guys and look forward to doing the rest.

I do apologize for both the picture and painting quality - I'm having some minor motor control issues today with my left side due a very limited but sometimes recurring after effect of a pair of strokes in 2006.  These were painted with one hand and a vice.  My progress will be a bit slow but steady.

Last night I had the opportunity to help Ernie (Architects of War) play test his new set of ACW skirmish rules titles American "Uncivil War".  Our game featured a Union foraging party whose mission was to gather up some supplies and get of the board.  Opposing them were a rag-tag assortment of Confederate troops and civilians and a lot civilian characters.  One tip -when you play the game in the future don't trust those rebel women - they're dangerous!

The game was a lot of fun and we tweaked the rules a bit.

I didn't take any pictures, but during the game I got to see some of the new ACW miniatures Ernie's coming out with as well as some breath-taking new buildings - there are a lot of great new stuff coming out for AofW!

Ernie put up a post about the game on his blog, where you can see pictures of some of the miniatures and buildings he's producing.

I also got to see the 28mm "bombed" house model, which I'm definitely buying.  It looks fantastic for the world wars or even a Sci-Fi /post apocalypse setting.

As for my own modeling efforts, I've primed and started to paint some Romans.  I'll put up a post when they look half decent.  Right now I'm testing colors and level of detail.
Posted by jmilesr at 6:00 AM No comments: