Robotics Team Invited to Compete in the World Championship

Saturday was the Maryland State Championship and my son's team (3113) earned a berth to compete in the World Championship next April in St. Louis - it's a pretty big deal in the robotic's world and very exciting for my son and his team (as well as the coach - me!).  This will be our second trip there and we're very much looking forward to the event.

My middle school team also competed in the Championship and did very well, placing 7th out of 32 teams.  They were the youngest team in terms of age and competed against all High School age competitors so not a bad showing at all.

With two teams competing, I didn't get a chance to take any pictures so I'll add some later once i get some copies.

The only bad news is there will be limited time for modeling between now and Worlds, so my standings in the Analog Hobbies painting challenge will continue to decline.  I did mange to finish another confederate infantry regiment this morning. 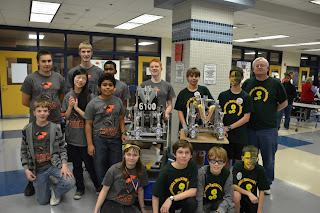 My robotics team won another event this past Saturday.  As I've babbled on before, I coach several robotics team and the one that was competing was team 4976, which is made up of middle school aged scouts from my son's Boy Scout Troop.  They're competing is a High School lever competition so it pretty tough for them.  Well until last saturday because they won.  The first picture shows the team (on the right) with their alliance mate after winning the Marriotts Ridge Qualifier.   Doing so has given them an invitation to the Maryland state championship.  My other team (3113, which my son captains) has already qualified so I'll have two teams in the state championship in three weeks. 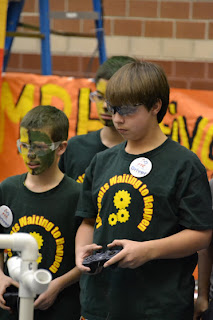 Here's a shot of the drive team, their all 12 or 13 years old and showed great poise in a tough competition. 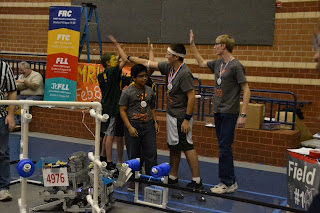 The last photo is a shot of the alliance after the last match.  Saturday was a great day and I think the best quote came from one of my scouts who was asked by a someone from another team in a bit of a mocking way "What do you guys hope to do here?"  His reply with out missing a beat "Kick High-Schooler Butt!"

They did a great job and now we have a three week dash to get ready for states!