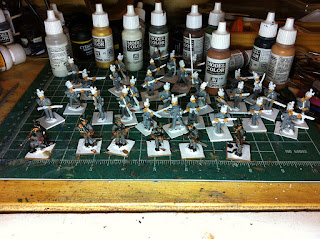 I've started my next US War of 1812 unit, which is a US Rifle battalion.  I choose to do the 4th US Rifles as I like the grey uniform - it's a bit different than the standard "dark green" most rifle units get.  Besides I will eventually have the Glengarry Lights on the British side, who wore dark green, so a little bit of color difference will help players keep track of who's who on the table top.

This unit will have 36 figures, of which 6 are 90%+ complete and the others are about 1/3 of the way done.  I should get these completed over the course of the weekend and submitted to Curt for the painting competition.

Back to the workbench.... 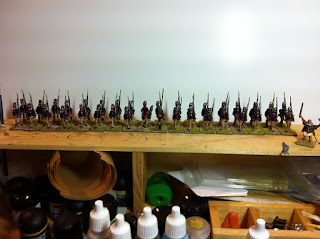 The 29th US Infantry is complete!  This is my first US unit for my 28mm War of 1812 project and it consists of 36 figures.  Sorry for the poor picture quality but I was too lazy to get the right lighting in place.

This is the 1st unit of a planned 8-10 unit US force which will consist of: 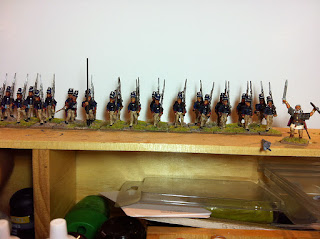 As per the previous posts, I have completed these figures as part of the Analouge Hobbies painting challenge.  I've had a pretty decent showing (in terms of volume) but some of the other competitors have some amazing contributions.  The competition has been a lot of fun and I appreciate all the work Curt has had to put in keeping up with all the submissions.

As you can see in the second picture, I still need to add a flag to the unit and will be trying a new manufacturer I found (via his comment on Curt's blog), Flags of War.  The flags seemed reasonably priced so lets see how the work out.

First half of a US Regular Infantry Unit 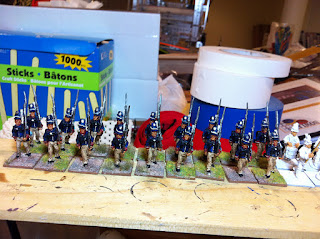 The first 18 out of 36 figures for a Regular US Infantry battalion (War of 1812) have been completed.

I did these fairly fast but am happy with the "unit-look" and think they will be more than serviceable for the table top. 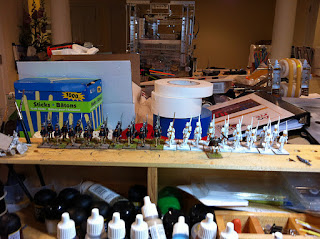 The second half of the unit should be finished in a few days but I doubt there will be a lot of progress on Christmas day.

Heres hoping that all of you have a wonderful holiday.  Merry Christmas for the Lair of the Uber-Geek! 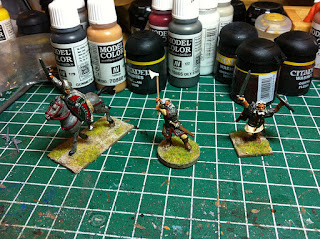 My first entries into the Analogue Hobbies second annual painting competition have been completed and submitted to Curt.  For one brief, shining moment I was in the lead.  Of course there were no other entries but, never-the-less, I was in first place!!  Sadly, more talented and efficient painters have usurped the pole position. 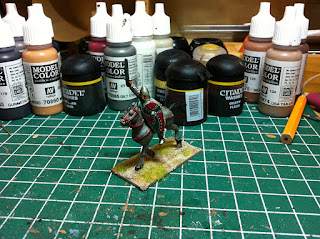 My first three entries were for SAGA and consisted of the mounted Norman Warlord (I didn't really like the one I completed a few weeks ago) and two Vikings. 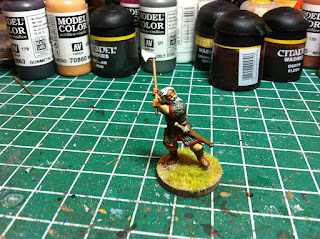 The Vikings are a bit whimsical in nature and are based on a request from my son to depict what Santa might look like if he was a Viking.  The figure to the left is the one that comes with the SAGA ruleset and wields a mighty two handed axe - that makes being on the naughty list a decidedly risky proposition! 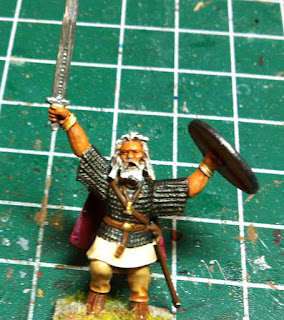 The third figure is another "Santa-Norseman" but comes from the command sprue of the Gripping Beast Viking plastic set.  While you can't see it in the picture, his shield does have a red and green holiday design.  We are very festive this year in the Lair. 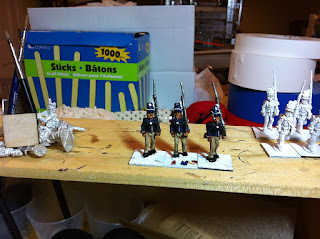 In order to show a sneak peak of my next entries, I need to bend Curt's embargo rules, hopefully he'll not notice as very few people ever read this far into any of my posts.  I've started my first 36 figure unit of regular US infantry for the War of 1812.  The figures are from Knuckleduster and they are top notch.  I'm painting this unit in the Fall/Winter uniform, hence the tan rather than white pants.  The first three are almost done. 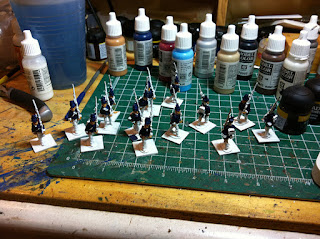 I've got 12 more in process and 18 awaiting there first dab of paint. 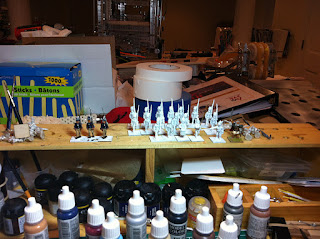 We'll see how long it will take me to finish the whole unit.  I suspect it will be at least a few days!

Merry Christmas from the Lair of the Uber-Geek! 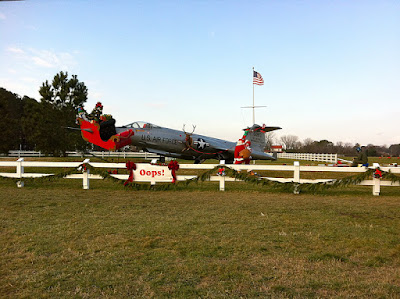 It looks like Santa had a "training mishap" while on exercise with the US Air Force.  I'm sure the elves will get things fixed up before the big night.

Heres to wishing all of my readers a wonderful Christmas holiday and happy New Year.  My family and I are looking forward to a quite holiday at our home on the Eastern Shore of Maryland - hopefully one that features some toy soldiers under the tree!

By the way, I took the above picture at a house close to mine - they're very artistic and always have some form of whimsical sculpture for major holidays, but this time they have out done themselves with the use of a real jet airframe!  Please note that no reindeer or elves were harmed in the making of this sculpture.  Click on the picture to see all the details - the sulking pilot to the right is very well done.

Marry Christmas to all!
Posted by jmilesr at 6:58 PM 14 comments: 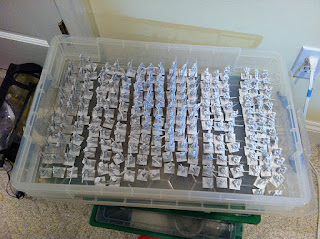 I just finished cleaning up and priming 220 Knuckleduster War of 1812 figures.  From left to right there are 5 36 figure US units (3 regular Infantry, 1 Rifles and 1 Militia) and 1 40 figure British unit (Glengary Lights).

The figures came in really good shape and had little flash.  Other than straightening rifles/bayonets there was very little clean up required.  I prefer to do priming in large batches as it's much more efficient.  Here are my steps

(1) Clean up flashing and sand bases flat - make sure each figure can stand on it's own.  I also add brass rod flag poles during this step.

(3) Attach to 20mm square base with super glue.  The bases will be magnetized later on so I can group the figures in either 4 or 6 man stands.

(4) Prime.  I prefer to use white primer.  I use a very basic and cheap primer from Lowes (a US Do-It-Yourself store chain).  I let the primer dry at least 24 hours before starting to paint.  In the case of these figures it will be a bit longer.

I'll start painting these gentlemen on 12/20 as they will be my primary source of material for the Second Annual Analog Hobbies Painting Challenge!  Lets see, the challenge runs from December 20th to March 20th so that's roughly 90 days or 2.44 figures a day.  Hmmm, given my current glacial rate of output is closer to 0.1 figures a day I may need to up production speed! 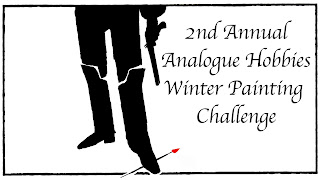 It seems as if I've gone and entered the second annual Analogue Hobbies Painting Challenge.  I enjoy watching last years unfold but discovered Curt's great blog after the event had started.  If you haven't yet gone over to his blog, you should do so it a very nice read with great miniatures.  Of course those compliments are in no way an attempt to sway the judging in my direction.  Nope, not a chance of that, but if it did....

This year's event has a bit of a Tom Sawyer feel as Curt is allowing participants to get a 10 point bonus for painting one of his 28mm Viking figures.  Hmmm, I sense a real opportunity for Curt to pawn off all his household chores on point crazed and competition dazed miniature painters "must get more points..."  One wonders if he will use the awesome power of his competition for good or evil.  I suspect if my future posts indicate I'm traveling to Saskatchewan to shovel snow or wash dishes in return for painting points you'll know that Curt has been swayed by the dark side.

As for my entry, I'm leaning towards finally starting to paint my War of 1812 units (with the 200th anniversary coming up and all).  I recently purchased a rather large lot of War of 1812 figures from Knuckleduster (approx 225 figures) to flesh out at least 5 American infantry / militia units and one British unit (the Glengary Lights).  I'll also flesh out my Roman and Dacian armies a bit and there is always a chance that some 15mm Flames of War might sneak in just to keep things interesting.

There are some great painters entered into the competition so I don't have a chance on the quality side so it's got to be a quantity win for me.  Let the games begin! 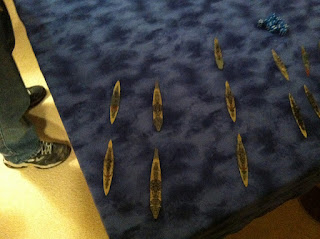 Last night Dick hosted a WW2 Naval game using his Axis and Alies ships / planes and the Victory at Sea ruleset.  The scenario was a hypothetical capital ship slugfest in the Philippines. I was the Japanese 2IC and had command of the Battleship Division (pictured) which had 7 Battleships, including the mighty Mushashi and Yamoto.  As with all of Dick's games it was a grand evening and he and his wife were superb hosts.  Many thanks to Gary who brought Chili for dinner - although I was a bit suspicious that it was a cunning ploy to distract players later in the game .... 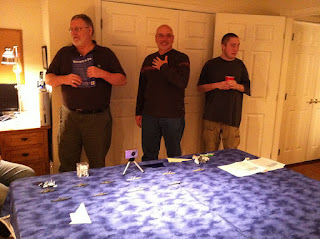 The allied command staff - I'm sure they look much more impressive when they are wearing their Navy dress whites. 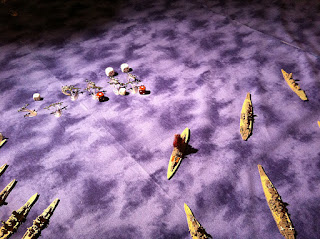 The allies draw first blood as Les's battleship division savages the Nagato.  While the Nagato gave as good as she got, being the closest target to a group of 6 modern US battleships with 16 inch guns isn't as glamorous as one might think.  You can also see the developing air battle to the left.  This is the second time I've played Victory at Sea and the first with air and I really liked the simplicity of the rules.  Most of the players were new to the system and we all picked it up after a few turns. 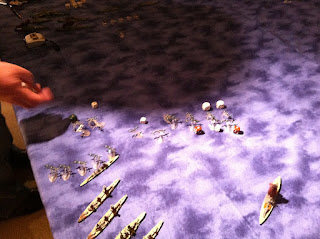 Japanese reinforcements show up in the form of the Northern command - heavy cruisers with deadly long lance torpedos. 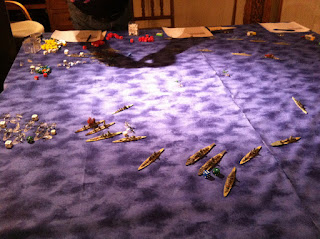 A few turns later, The Nagato has been sunk and the Mushashi engines put out of action - but not her guns!  In return the US has lost both the Maryland and North Carolina sunk and the Iowa and New Jersey have been reduced to flaming hulks.  We decided to call the game after another turn as the US losses were very heavy and the Japanese cruiser squadron was lining up for a torpedo run.  Many thanks to both Dick and Joe (the respective Cic's of the US and Japanese fleets) who spent more time tutoring the rest of the players on the rules than actually playing the game. 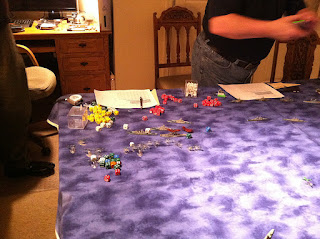 I was very impressed with the Axis and Allies ship miniatures.  They are not as detailed as GHQ but they look great on the table, are not as delicate as GHQ, come pre-painted and are very inexpensive.  The Plane stands are also very well done.  I have been know to be a bit of a miniatures snob and my preconceptions of these ships was way off- they are very nice miniatures. 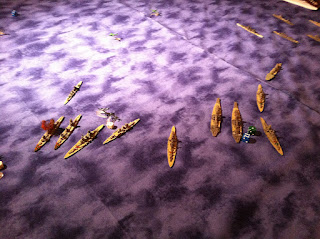 One last picture of the Battleship division at the end of the game - big guns = lots of fun on the tabletop.