AWI at the Club: Freeman's Farm 2.0 with GdA 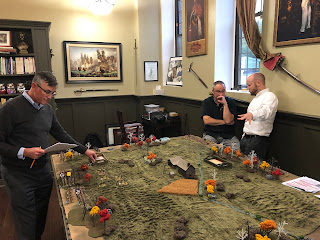 Last night we replayed the Freeman's Farm scenario using the same table and forces but replaced the rules with the AWI variant for General D'Armee.  I umpires the game and had a blast.

Here you can see the British commanders, Tony and Greg, conspiring to some form of battlefield trickery. 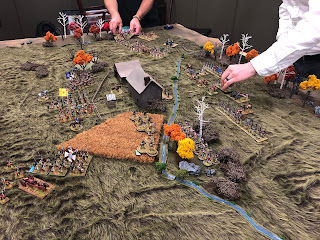 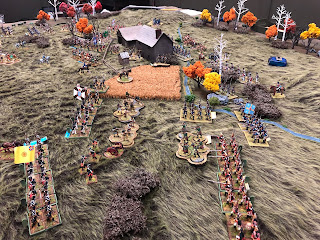 The Rifles held the farm for a good number of turns but were whittled down by heavy British fire.  Eventually they broke and ran allowing the brits to seize the farmhouse 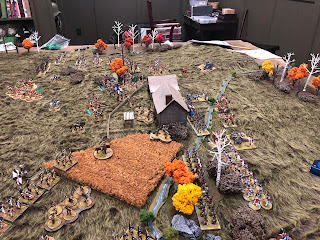 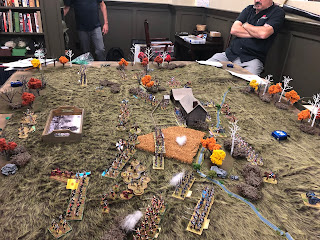 Tony launched a furious assault on the British rank flank and routed two US battalions, The US Brigade stabilized but was spent as an offensive force.

With the magic witching hour of 9:00pm approaching, I called the game as a British victory.  Losses where heavy on both sides, but the British had a slight upper hand.

I thought the game went very well and everyone seemed to be having a great time.  Wow both GdA and ESR are competing for my favorite AWI/Napoleonic ruleset.
Posted by Miles at 12:15 PM

That is the best looking wargame room that I have ever seen, bar none. You are lucky to be able to play games there and with the LWTV gang. I'm looking forward to the LWTV podcast for this battle.

It looks like there a lot of Fife and Drum Miniatures AWI figures on the table.

Nice looking table setup. I think some of the most enjoyable games are the ones where victory hangs in the balance for both sides. Sounds like this was a thrilling encounter.