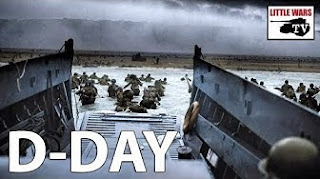 The D-Day video from Little Wars TV is out.  This was the first of the club's games I was lucky enough to get a chance to play in and it was a blast.  You may see me again in a future, more nautically themed episode.

As you will see, the game itself was huge and simulated the entire D-Day landing (all 5 beaches!) at the battalion level using 6mm minis from Tony's collection.  I was in command of the  German 84th Corps and held the center around Bayeux. We used the Rommel rules set from Sam Mustaffa.  It was my first time playing Rommel and I really liked it.

I've played in a lot of games, but few of this scope that are so well staged and never any that have been filmed (on purpose).  During the course of the game, there are serval breaks where the players from both sides scurry off to either consult or give their impression of how the game is going.  These little "pauses for reflection" were really interesting and provides a formal recording of the ebb and flow of success or failure on the tabletop battlefield.

The game was played on June 1st, 2019 which was pretty close to the actual 75th anniversary and I think that added a little to the "drama".

Here are some "behind the scenes shots" 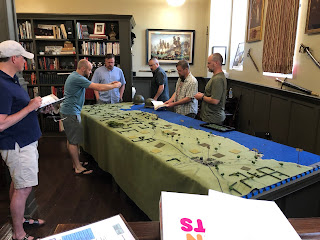 Greg giving the allied generals their briefing while the germans look on.  The D-Day table was 12 x4 feet and looked superb.  Greg's artistry when it comes to tabletop design is second to none.

You can also see in the bottom right of the picture one of the club's secret weapons in making great You-Tube content - Doughnuts.  Is there nothing they can't do? 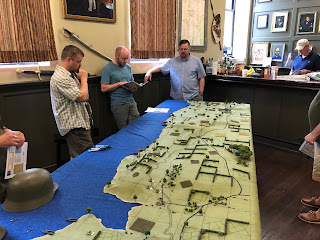 A look down from the other end of the table.  There were four allied players and three Germans.  Two of the germans were really good players (Tom in the white ball cap and the wily Ed, who can just be glimpsed to the right of this picture.  Ed moves to fast to be captured by a simple I-phone camera.  Sadly the Germans were burdened with a moron - ME!  I'm pretty sure both Tom and Ed made Greg mad sometime in the past to deserve that fate. 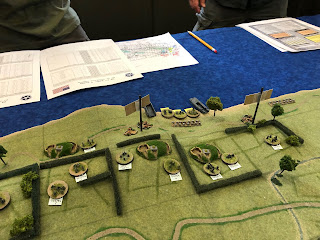 The game began with a handful of night turns to simulate the allied airdrops.  As Germans, we didn't have much of an ability to reacts during those night turns.  What movement I had was used to rush a few extra battalions towards Omaha beach.

As dawn broke at 6:00am on June 1st, the first American troops made their way ashore at Omaha - you'll need to watch the video to see what happens next....

Email ThisBlogThis!Share to TwitterShare to FacebookShare to Pinterest
Labels: LWTV

Great link, looked like a fun game. It's well poised for Day 2...

I had a very pleasurable hour watching the two videos. What a great looking game! I really like the play surface and the attention to detail the GM put into the overall production. First class.