New Top for the Game Table 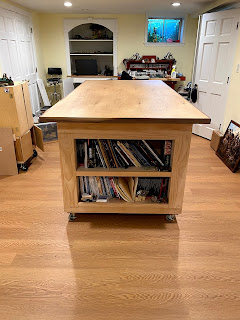 The venerable game table has a new top and some sporty wheels.  The old table was really beat up after 11+ years of gaming and high school robotics teams and just didn't look that good.

I remove the top and replaced it with 2 laminated sheets of 3/4 inch plywood with a nice walnut edge treatment. 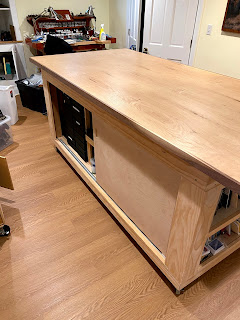 I also ransacked the crap - I mean - treasure I had crammed inside it and have a lot of new storage space to work with. 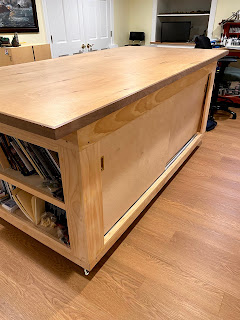 Despite getting a nick walnut edging while carrying the top down to the basement, I think it looks grand and cant wait until I can host some games on it.  The nick is in the corner in the third picture/. Im thinking of using a bit of epoxy to cover it up.
While carrying this top was a bit of a challenge, it's dead flat and will be a great play surface. 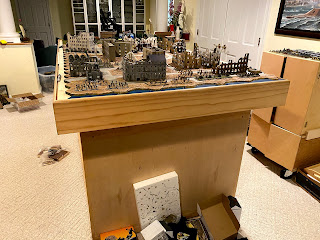 The old top looked like this.  The original design concept had the top on piano hinges so it could be opened to use as a drafting board and have storage underneath.  It might have been a sound idea in theory.  However, in practice it was never used as the top was awkward to lift and usually the table is covered in umm stuff. 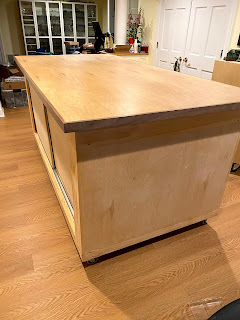 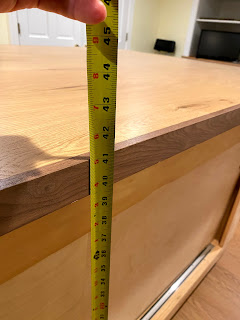 The table is 41 and 1/4 inches high so just a little shorter than the previous version but a nice height to game at.
Next I want to build to extensions and bracket mounts to be able to have a larger than 8x4 playing area.
Overall, I'm very pleased with how this came out!
Posted by Miles at 10:44 AM

It looks absolutely splendid. I may save these photos so I can hire someone talented to make me one like it.
Your reference to HS robotics made me smile. I used to help run belt-sander races, but not on my gaming table!
Cheers,
Michael

That looks very nice Miles and something I would love to had, if only I had a dedicated games room!

Nice work extension would be a fine idea !

It looks great. Do you think you'll miss the slight edge you had on the original top? Asking as someone who is about to embark on making/adapting a table for wargaming so am trying to head off any potential pitfalls?

That's a spiffing new top for the table. :)

Anthony: I found the border lip around the edge of the former table top to more of a nuisance than a help. The biggest detriment was it made expanding the table difficult. If I find I miss it I can always add it back - the lip was standard quarter round 1/2 inch moulding.

Once I get this table finished, I need to build 3 6x4ft versions for the club - that will be May's project!