Saturday afternoon and then Sunday morning was an epic basing session for both the Soviet and German Stalingrad armies.  The figures were purchased from GAJO Miniatures and look way better than what I can muster (and did for the most recent Analogue Hobbies Painting Challenger.

Two base scenicing methods were employed - my bog standard "country side" basing which uses a Vallejo texture gel - as pictured on these Soviets. 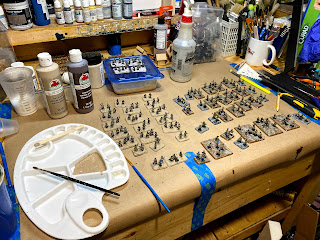 Once the gel sets (about 8 hours) I mix up some craft paint to look kind of like Vallejo USA tan Earth.  The mix is roughly a quarter sized dollop of "Country Tan", a drop of "Burnt Umber" mixed with the same volume of water.  It's a pretty close match and way cheaper.
The bases are then painted and set aside to dry (takes about an hour. 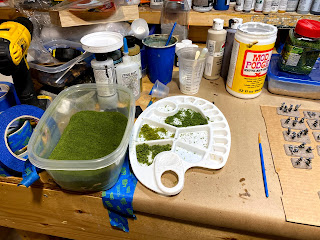 The next step is adding some ground foam - i work with a pallet of 4 types of ground foam.  Each base receives a coating of Modge Podge matte medium applied with a brush, and then a sprinkling of ground foam.  I then hit the base with a spray of water to draw up the modge podge and then set aside to dry. 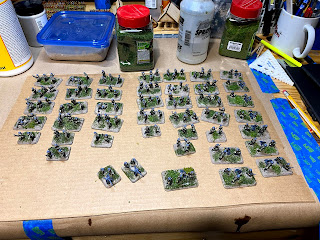 Here are some Germans all done.  2 full German infantry companies plus supports where based for the countryside 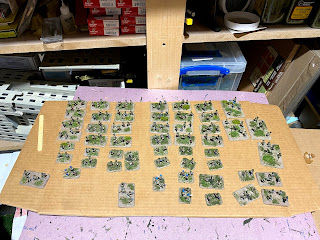 and some Soviets.  This session I added 2 full Soviet Rifle companies, which augment the 1 I did during the most recent Painting challenge. 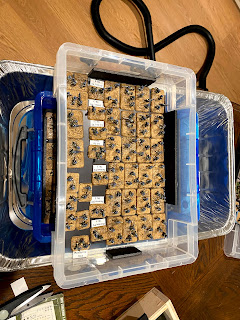 The second method of basing is dead easy and used for urban / rubble bases.  The picture shows the 2 German infantry companies if prepared with this method.
The process is simple - layer the entire base with modge podge and then dunk the base in a mixtures of colored sanded tile grout and different types of model railroad ballast.  My came from the debris of making the hexes for Stalingrad.
Shake the bases to get rid of loose gravel and then take a soft brush (I liberated one of my wife make up brushes) and dust most of the tile grout powder that may be on the figures - leave a little as it's a nice form of weathering.  Once the figures are dusted, hit the entire base with a few water spritzes from a spray bottle and set aside to dry.  Once the grout sets, it's rock hard.  The bases look great and there is zero painting! 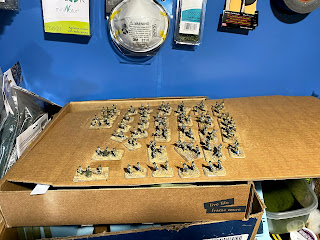 Here are two additional Soviet Infantry companies with urban bases.
I'm pretty much done with figures for Stalingrad - especially when I count the fantastic minis Tony painted up .
I've got 7 full Soviet Infantry Companies and 4 german plus Tony has another 3 German companies.
There still are some specialty figures to finish up.  I do need a few extra guns....

I like the beveled edge on your bases; did they come like that or did you customise them?

The bases are plastic from either Battleground (Flames of War) or Plastic Soldier company.

The ones with the nice bevel are Flames of War bases

Do you change your basing style by period, or theatre? Or does it tend to be the same style for all your army's?

Anthony - for WW2 I use three basing styles a generic "European green field", "urban rubble" (both of which are used in the post) and a jungle theme for the Pacific.

Since I use these figures for multiplayer convention games, I use the different basing to help players identify their units by alternation basing styles. It looks fine and speeds up play