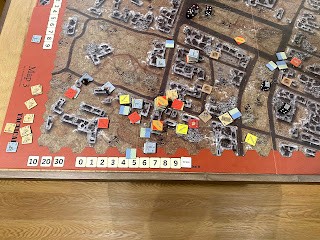 My personal vanity project of writing a set of wargaming rules continues on.  One of the goals of using hex-based terrain is speed of play (no measuring) for large participation games.  Another side benefit, is I can test the rules using board games - as with the lovely Stalingrad board and counters from Flying Pig's Old School Tactical game series.  If you're looking for a fun and "not brain melting" complex tactical WW2 game, I highly recommend Old School Tactical.

I've been running some company level actions to test the rules and find some logic flaws.  The first game proved that KV-1's shred tiny Panzer III's if they can not be outflanked.  It also proved Germans trying to cross open ground without smoke or artillery support do not have a very good time of it. 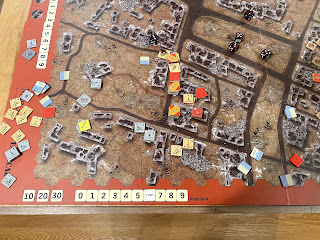 A second test game, where that nasty old KV-1 was replaced by a T-34, proved a bit more even.  The T-34 did drive off 1 Panzer III but was worn down by successive damage results and eventually caught fire and had to be abandoned.
The infantry combat worked really well but I'm still tweaking the mechanics to make it a bit more deadly.
Close Assault in the first game proved to be a bit bloodless and that combat results process needs to be tweaked also.
One of the evolving goals for this ruleset is to allow players to stage games with miniatures on a tabletop  - lets call that "3D gaming" or using an existing hex and counter game like Old School Tactical / Squad Leader / Combat Commander to play out a "2D game".
Why would one want to do that - to make the game more approachable to new players - there are a lot of copies of Squad Leader gathering dust on shelves around the world and to facilitate extended multiplayer campaigns.  More on that in a later post.
The working title for these rules is "Company Commander: WW2".  I suspect that will change as there is all ready a ruleset named Company Commander but it's for small scale Napoleonics.   Still I think using the same name isn't the right thing to do.  At some point I'll need to put on my "brand management" thinking cap and come up with a suitably overwrought name.   Maybe "The Brave Little Toy Soldiers".