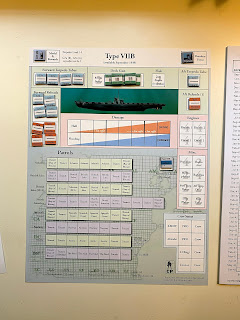 It was a rainy and unseasonably cold Saturday morning so I decide to break out an old gem of a solitaire game "The Hunters" for a little diversion.  The Hunters is a fun little game where the player is in command of a U-boat and you see how far you can get before, well, the allies catch up to you.

I stated with a basic Type VIIB boat.  Thew mechanics of the game are relatively simply - you roll to see which theater your next mission is - my first few where the British Isles.  The sub marker is then placed on the right track and you roll for encounters which are varied and based on where you're patrolling.  Earlier in the war (I started at Sep'39) you have a greater chance to catch single, unescorted ships.  As the war progresses the allied escorts and air attacks become both more numerous and more effective. 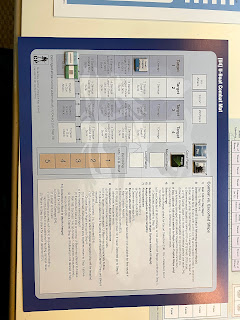 My first victim is an unescorted small freighter of the coast of Britain.  Knowing this poor ship has no escort and it is a Daytime attack, I elect to approach on the surface so I can use the deck gun.  I elect to shoot a single torpedo and fire two rounds of my deck gun.  The torpedo hits and the deck gun proves to be overkill. 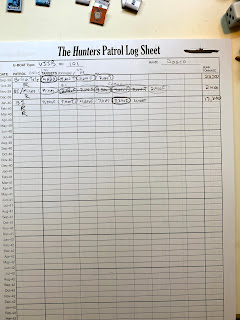 Progress is tracked by mission, with the tonnage of each ship engaged written down - circled ships have been sunk.  After my first three missions my U-boat had racked up an impressive 8 kills and 42,900 tons.  We also successfully deployed mines on the third mission.  I also almost lost the U-boat on the way back from the mission as we were attacked by allied aircraft and heavily damaged.
After repairs, we shall see what more havoc we can inflict on allied shipping.  Hopefully we roll up a Norway mission as it is rich in potential capital ship targets!
The Hunters is available from GMT games.

I have lost many a Saturday getting stuck into The Hunters/The Hunted.

For a stressful solo board game experience I highly recommend 'Target for Today,' where you run a B-17 or B-24 crew.