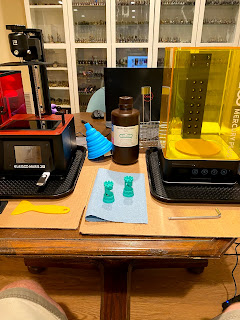 The Elegoo Mars Pro 2 printer has been set up in a temporary location (the card table in the game room) so I could start to learn how to use it.  Long term, I'll make some room in the shop. 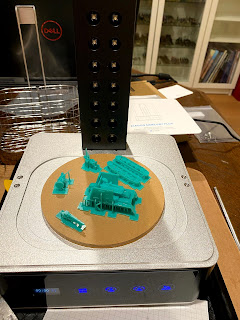 The first miniature prints are a German Bison Assault gun and 2 Soviet winter infantry figures, all 15mm scale.  This picture shows the lot on the curing turn table right after finishing the ultra violet curing.

I downloaded some all of these files from a sire called Wargaming 3D, which is a market place for vendors to sell .stl files for historical wargaming - if you're thinking about a 3D resin printer go check it out as the selection is very, very broad. 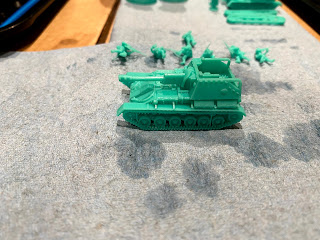 The second test print was a SU-76 and seven Soviet Naval Infantry figures (again, all 15mm).  The SU-76 is a 2 -part model - the hulls is one piece and the gun compartment a second. 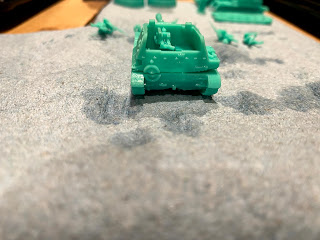 I did have a minor issue with the back right corner of the gun compartment lifting off, as you can see in this picture.  It will be easy to fix with a little green stuff and maybe some stowage. 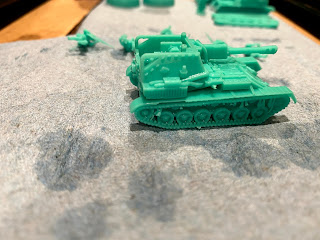 The corner lift continues around on this side.  In all honesty Ive had much worse issues with resin cast tanks from Battlefront.  I still need to remove some of the print supports from the model. 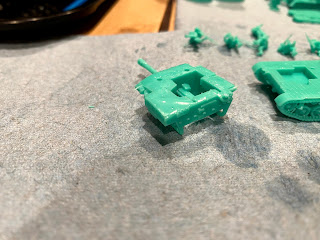 A close up of the "warping".  I'll be printing a bunch of SU-76's so will eventually figure out the right settings.  I really shouldn't complain - the .STL files for the SU-76 were available for FREE from the wargaming 3D site.  Free is a very good price. 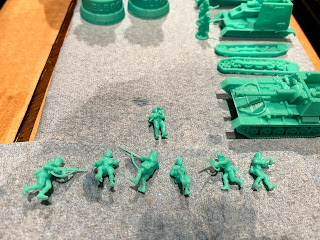 A close up for the Soviet Naval infantry.  I am very pleased with the detail and think these figures are as good as the plastic or metal figures I'm used to purchasing for this scale.  In fact, I'd say they are better than Plastic Soldier Company.  These figures are from a file set called RKKA_naval_squad_02 which has 12 different poses and you get files for both 28mm and 15 figures.  There are also squads 01 & 03 from the same designer (mr3DPrint).  My current set of Soviet Naval Infantry are metal casts from Peter Pig - they are great figures but only have SMG's and 2 or 3 poses.  I'm very excited about the modeling possibilities here. 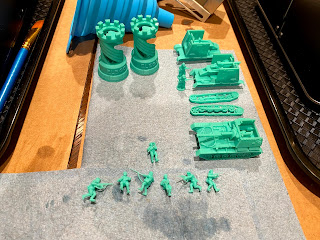 The Su-76 and 7 infantry figures took about 1.5 hours to print and another 15-20 minutes post production to wash and cure.  The build plate on the Mars 2 Pro isn't that large and I could probably fit another 3 infantry figures on it.
I am very struck by the reliability of resin printing.  One does have to be very thoughtful in working with the resin - its rather toxic stuff.  The key is developing a set workflow to ensure you don't contaminate surfaces with resin that gets on your gloves.  I'll do a future post on my workflow once I feel its really nailed down.
3d Resin printing is a really exciting technology for the hobby and I think it will have a profound impact on the distribution of miniatures.  Will it replace cast metal of plastic figures - probably not.  I think it will eventually reduce the sizes of those "mass produced" ranges to the basics and push the specialty troops to digital distribution.  I'll probably always get my bog standard Soviet infantry from Battlefront or PSC, but specialty troops like Naval Infantry or NKVD will likely now just be purchased as files.

Looks good! How's the smell of the resin?

Great output from your first test pieces out of your new toy. :)

Sites like Thingiverse are also good for free models (including a whole load of 1:100 scale vehicles) - there is a lot if stuff out there although it can sometimes take a bit of finding !

Tamsin: I believe when you use the term “toy” you are actually wanting to say “critically important, life changing, world altering tool” or words to the effect.....

I have avoided Resin Printing so far and just stuck to a FDM printer with PLA so I will be interested to see your workflow and hear your thoughts.