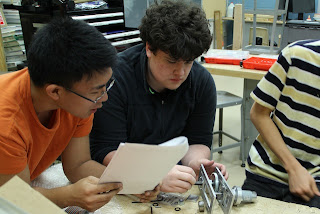 As I've mentioned in previous posts, my son competes in several competitive robotics teams and he tolerates me as a coach.  One of those competitions is the FIRST Robotics Challenge (FRC).  We've organized a team through my son's High School.  The picture to the left shows my son (center) with 2 other team mates working on the gear box for the ball shooter. 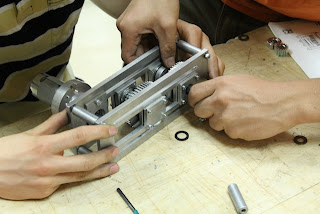 Here's a close up of the gear box.  The team designed it so that it will increase the rotation speed of the shooter up to 5,000 RPM.  This year's game is called "Rebound Rumble" and it involves capturing 8 inch wide foam basket balls and scoring them into several different height basket ball hoops.  The field is 54 ft by 27 ft in size and there will be 6 robots on the field at a time (3 on each side).  The field also has a steel barrier (4 inches high, six across) through the center the robots either need to go over or use one of three 1 ft high swing bridges to cross. 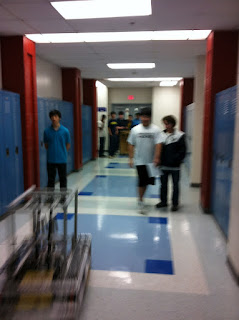 Here's a picture of one of our first drive tests.  Its a bit blurry because my son was driving and he'd thought it be fun to chase me down the hall.  The drive system is a six wheel AWD that is both very fast and can maneuver extremely well. It's a bit scary to have a 120 pound robot chasing you down the hall in "test" mode. 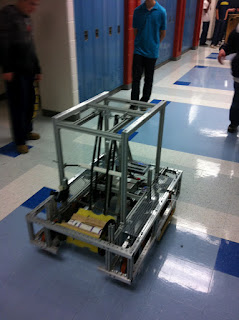 Here's a picture of the bot once it stopped.  The drive test went extremely well and the team was most pleased that the robot could "drift" while making turns. 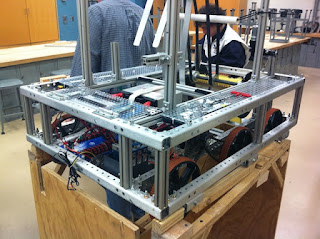 Here's a picture of the bot on the rolling cart - it's a very complicated system, especially for power management.  The robot features 4 main systems - (1) a drive system, (2) ball capture / loading (3) Ball shooting and (4) a swing bridge arm).  We've managed to test all four systems separately and they seem to work.  Unfortunately, we haven't been able to get them to work all at one time which is a bit problematic. 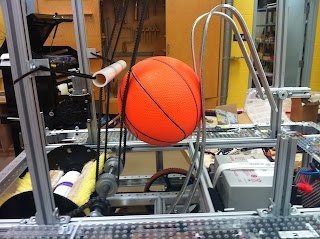 Here's where the pressure part comes in.  One of the really challenging things about the FRC competition is that the time allotted for teams to both design and build their robots is strictly limited - it's just 6 weeks!  More importantly, the six week timeframe ends next Tuesday (Feb 21)!  We've got a lot of work to complete in the next four days!

I doubt i'll get a lot of miniature painting this weekend. 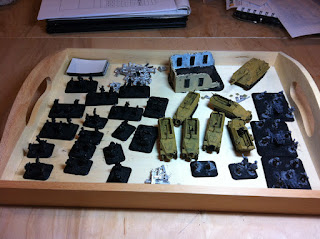 With all the noise and hub-bub about Version 3 of Flames of War (FOW), I thought it might be time to return to 15mm WWII for a change of pace.  Well that, and the fact that I was getting burned out of painting 28mm figures.

I really like FOW - it's a fun game and when I was new to the hobby it was a system that was   both easy to get into and enjoy.  I have a large lead pile associated with the game system so jumping back in required no immediate outlay of funds.

In the past, most of my lists were somewhat generic (just "germans" vs  "US").  After becoming a fan of the WWPD podcast and website, I thought it might be fun to field a "historical" unit (no game system bashing in the comments, if you please).  I've decided to build a unit around a Panzer Grenadier Company from the Panzer Lehr section of the Normandy books.  It has a nice balance of infantry and tanks plus I can use those "cool" Puma armored cars!  In order to build out the unit, I needed to add a second Panzer Grenadier platoon and their half tracks, a company command unit w/ half tracks.  For artillery support, I'm going with Nebelwerfers (150mm).  I through in a Jagdpanther for fun as well as some additional tank hunter teams for the other panzer grenadier platoon.  To be honest, I'm just copying the list from WWPD Panzer Lehr Grenadier Platoon list.

The half tracks are the new plastic ones from the plastic Soldier Company (PSC).  They're very easy to build but each 'track has 15 or so pieces (before details) so it takes about 10-15 minutes to assemble each track.  I like building the models so I don't mind the extra work and the price break makes them very attractive.  Size wise they are just about identical to the battlefront versions.

My apologies for the lack of posts but Jan to Mar is the heart of the robotics season and I'm coach 3 teams (2 of which my son is on) for different competitions.  It's a lot of fun but there isn't that much time for gaming!