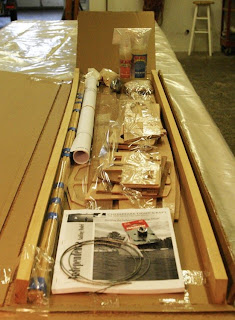 It seems that I have started yet another project.  Actually it's my son's idea so he gets all the blame.  With robotics season over until next September, Sean was going through a little bit of robotic withdrawal.  Then inspiration seized him!  Why not combine his two favorite past times: Sailing and Robotics and build, wait for it.... a Robotic Sailboat!  To be honest, I was sold after the words "Hey Dad, let's build a" but it seems like a fun "off-season" project for Sean and some of his team mates.

We needed a pretty big model to allow us to build in all the electronics and went with the R/C model "Independence" from Chesapeake Light Craft (CLC) a boat building outfit located in Annapolis.  I've built a few of the 1:1 CLC kits and really like their products.  As you can see in the picture above the kit is mostly a bunch of wood and some plans.  The finished boat is 48 inches long and the mast is five feet high.  That's a pretty big model there should be enough room for the electronics. 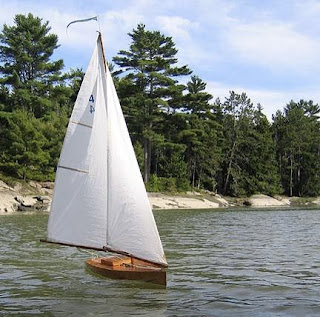 The electronics is all Sean's category - he's thinking a building a GPS-based guidance system along with a magnometer to measure how much the boat heels (leans to one side) in high winds.  He and his buds are busy mapping out the system components and figuring out how much money they need to raise to fund the project.  They're also planning to install a standard R/C system to act as an override if the autonomous stuff fails.

The most complicated part will be figuring out the programming to trim the sail based on wind direction and the location of the current waypoint.  It's always fun to watch the initial optimism of a new project.

My job is to help with the woodwork on the basic hull and mast.  Hopefully, they'll leave me out of the electronics as that stuff mystifies and scares me!  It's all voodoo, you know.

The second picture is a photo of a finished model, hopefully ours looks like that but with a few extra antenna and other gizmos' sticking out.  We'll see.... 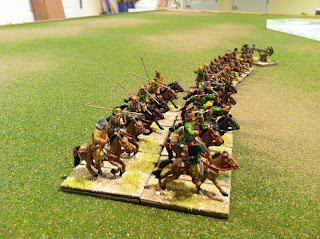 The final 3 Dacian units for my upcoming Historicon game are now done.  They are three missile units.  All of the figures are from Warlord and were based individually using magnetic stands.  As for the HCON game (PEL #F-144) "A Dacian a Day Keeps the Romans Away", it's allready sold out which is pretty neat. I will be running another game Friday or Saturday night "after-hours" so let me know if your interested in the comment section below. 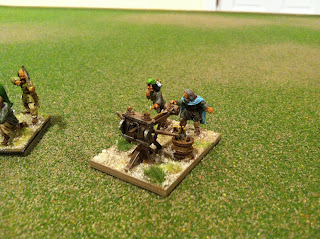 First up is a Dacian artillery unit, a scorpion.  I think the unit came out great but it does look a bit "smallish" with just the single engine.  If I have time I may get another one to give the unit a beefier appearance. 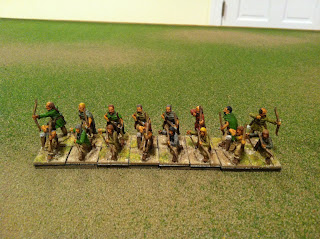 Next up is a 16 figure archer unit.  The figures are from the Warlord Celt range but they'll do as Dacians in a pinch.  I still need to touch up the base edges as some of the white primer is showing through. 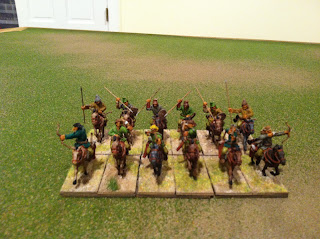 Lastly, here are the mounted Sarmatian horse archers.  These came out "OK".  The sculpting on these figures was not up to Warlords usual very high standards - some of the hands are huge but they'll do.  This is a bit surprising as the Warlord Sarmatian cataphracts are the best figures I've worked with.  Oh well, if I decide to expand the Sarmatian light calvary I may go back to either modifying the Warlord Celt cavalry or trying the Foundry ones.

Next up in prep for the game will be terrain, lots of terrain. 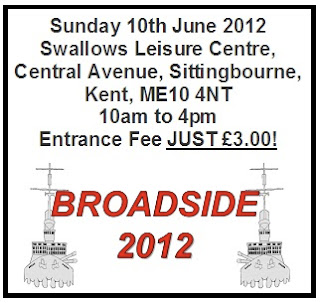 I've heard that the Broadside show has had some misfortune with advertising timing and has asked for some help in getting the word out on the event, so I'll do my part to support out trans-atlantic alliance.

Seems like a fun event AND it's located in one of those British  towns with a funny name - what's not to like?  Also by attending the show and mentioning you came via a blog post like this, you'll become an information-age freedom fighter valiantly striking a blow against the corporate hegemony who control the media and access to effective advertising placement.  Fight the Power, Fight the Power!!!!!!

Ok that last bit might be a "bit" over the top.  Please go to the show if you can.

My second attempt at being a GM at a convention game is now official and I'll be hosting another game at Historicon.  Last year's game was a lot of fun to put on and had a very good level of attendance.  This year's game will again pit Romans against a combined Dacian / Sarmatian army and will use the "Hail Caesar" ruleset.  The armies have grown a bit from last year so I'll be able to support 6 players (3 per side) rather than four from last year.

The game particulars can be found in the PEL, item F-144 and is titled "A Dacian a Day keeps the Romans Away".  Timing is Friday, July 20th at 1:00pm.  As with last year convention, I'll also run a few ad-hoc games in the evening.

Here's a link to the HCON PEL

Registration for last year's game filled up very quickly, so if your interested register sooner than later.

I'm still tweaking the scenario.   While the game will be different than last years it will not be a standard "line 'em up on each side of the table and have at it" style of game.  I've got two months to get this done so I'd better get cracking.

As with all my gaming enterprises the game is supported by the kind people over at Architects of War.

Cue ominous music please.  I have a tale of woe to pass onto to my dear readers.  Please learn from my example so that I do not suffer in vain.  First a little background:

I'm married to the wonderful and lovely Mary Beth (aka "Iron Daisey"), who is a former ballet dancer and hence loves going to see the ballet where she used to perform.  As her husband, it's my duty, oops I meant to say privilege, to escort her to these performances six or seven times a year as we have a subscription.  Unfortunately, I'm really not into the ballet (shocker!) and in fact struggle to stay awake during the performances.  Surprisingly, one can get into a lot of trouble if one snores during a performance - trust me on that point.

As we were preparing to go down to the Kennedy Center, I noticed that episode 36 of the WWPD podcast was out and available and I had a "brilliant" idea.  I could download the episode, and listen to it with one ear bud in my left ear as my wife sits on my right side.  It was a good plan - I even went and found my set of ear buds that are black to reduce the chance of being seen in the dark theater.  Oh I was being very crafty that night.  In fact, I even came up with a mission name - Operational Audio Escape.

My plan got off to a great start and seemed to be a real win-win.  Both my wife and I were enjoying the performances we wanted to participate in, she with the Ballet and me the WWPD podcast.  By the third act things were were even better - no "stares of death" from my wife due to snoring and I was enjoying the podcast - in fact for a few seconds I could swear I saw Steve, John and Luke gliding about on the stage as they danced a balletic interpretation of the Huzzah Hobbies Tournament.  Yes, it was a magical evening.

As the curtain came down on the ballet, so it did on the success of Operation Audio Escape.  You see, all plans have at least one fatal flaw.  My plan's flaw was as simple as it was devastating.  Once the lights came on, I turned asked my wife how was the show and her response was a "9th level of hell icy stare of death".  You ask why?  I had forgotten to take the ear bud out!  BUSTED!!!!!

Yes I'm now enduring a double punishment - I'm both in the Dog House "big time" according to my wife and I can't get the image of Steve, John and Luke pirouetting in their white unitards out of my mind.  Oh the horror, the horror.

What's the moral of this story.  If you have to go to the ballet, man up and do it - don't get tricky - it's not worth the risk and our wives are smarter than us.

Editorial Note: (In case my wife reads this)
In all fairness to the Washington Ballet, last night's performance was actually pretty good (as these things go for me) and the music was great - lots of Bossa Nova and Mexican guitars.  But the highlight was a set performed between the first and second act by Toto la Momposina - a Columbian singer who literally brought the house down.  I even paused the podcast!

The War of 1812 Campaign Guide 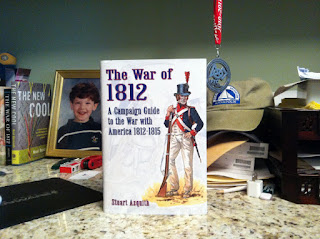 A belated birthday gift arrived today from Ernie and Barb - Stuart Asquith's "The War of 1812 Campaign Guide".  The book is a combination history / uniform guide and is targeted at the wargaming community.  It's a great single volume reference source and I'v been wanting a copy since seeing Mr Asquith's War of 1812 scenario book.

The historical overview is nicely done and lots of period maps but the tome really shines when it comes to the uniform information.  In the past, I haven't been a stickler for uniform accuracy, but as I get deeper into the hobby that aspect is becoming more important and this is a great resource to help me "fix-up" the accuracy of some of my unit painting.  Hmmm, maybe I should be concerned that this newfound concern with uniform accuracy is the first symptom of becoming one of "those" gamers - you know the ones we give a wide berth to at cons.

I'm very appreciative of the gift, but I do think the real reason for it is so I will not be constantly coming over and stealing - oops - I mean "borrowing" Ernie's Osprey's!

I think it's back the the War of 1812 once I finish up those Dacian missile troops.  I've got some of the new Knuckleduster US Marines to paint up. 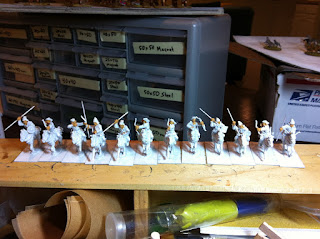 Some reinforcements for the Dacian/Sarmatian army have just made it to the workbench.  First up is a 12 figure unit of Sarmatian Horse Archers.  These are metal figures from Warlord and are pretty good.  Some of the hands were overly large (maybe one needs super strong "Hulk" sized hands to be a good horse archer?)  I was tempted to leave them unchanged and paint them green but didn't think many people would get the joke.  Any way after of bit of filing and replacing with some plastic hands they're good to go.  One does have to appreciate those plastic sprues and all the extra parts!

I may end up fielding this group as 2 small units of Horse Archers rather than as one big unit.  Let's see how the play testing goes. 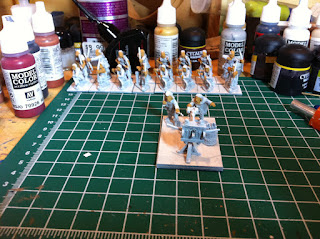 In addition to the horse archers, there is a 16 figure archer unit as well as a Dacian scorpion (all from Warlord).  Technically, the archer models are Celts but they'll do.  I think Foundry makes specific 28mm Dacian archers but I didn't want to wait or pay the high costs that foundry charges and Ernie had these in-stock.

The scorpion is Dacian specific and will be the first of several artillery units I hope to complete before Historicon.  I should have these chaps finished in a week or two and then it's onto to scenery for the big game.