Only three weeks remain in the AHPCV contest. I'm currently in 4th place and I very pleased with both my production and standing.  My current tally of points is 2,665 compared to an original plan of 2,404 - so being ahead of plan is a real accomplishment.

I think 3,00 points are within reach but we'l see how the next three weeks will play out!

This years challenge continues to be a blast
Posted by jmilesr at 7:28 AM 1 comment: 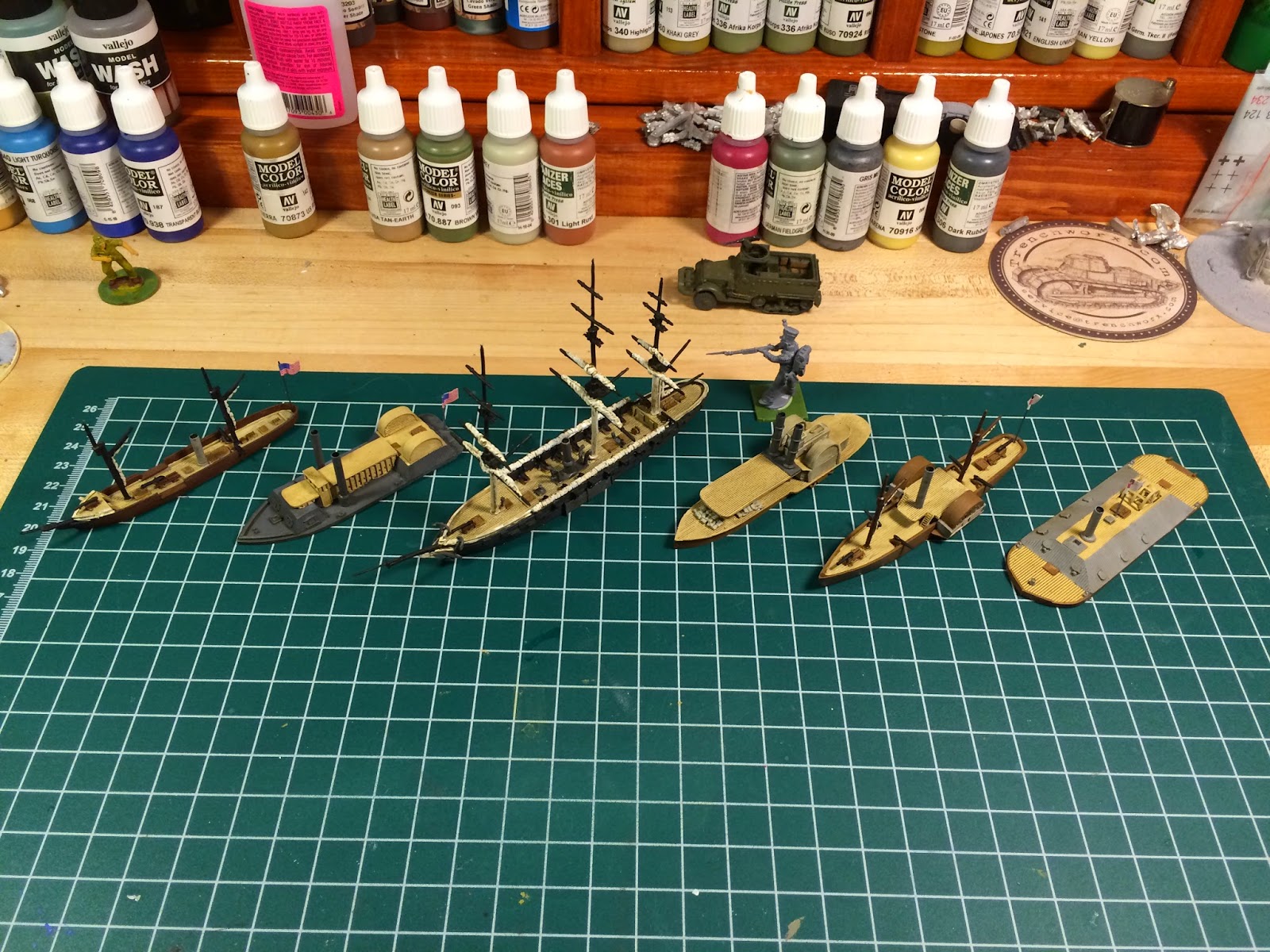 Six more ships have joined my 1/600 ACW collection as I continue to churn through my lead mountain while participating in the AHPCV. A few of these models will see active duty in my upcoming game at Historicon.  All of the models are from Thoroughbred Miniatures - the models are all superb and I can not recommend Thoroughbred more.  If you want to do ACW Ironclads, that's the place to go! 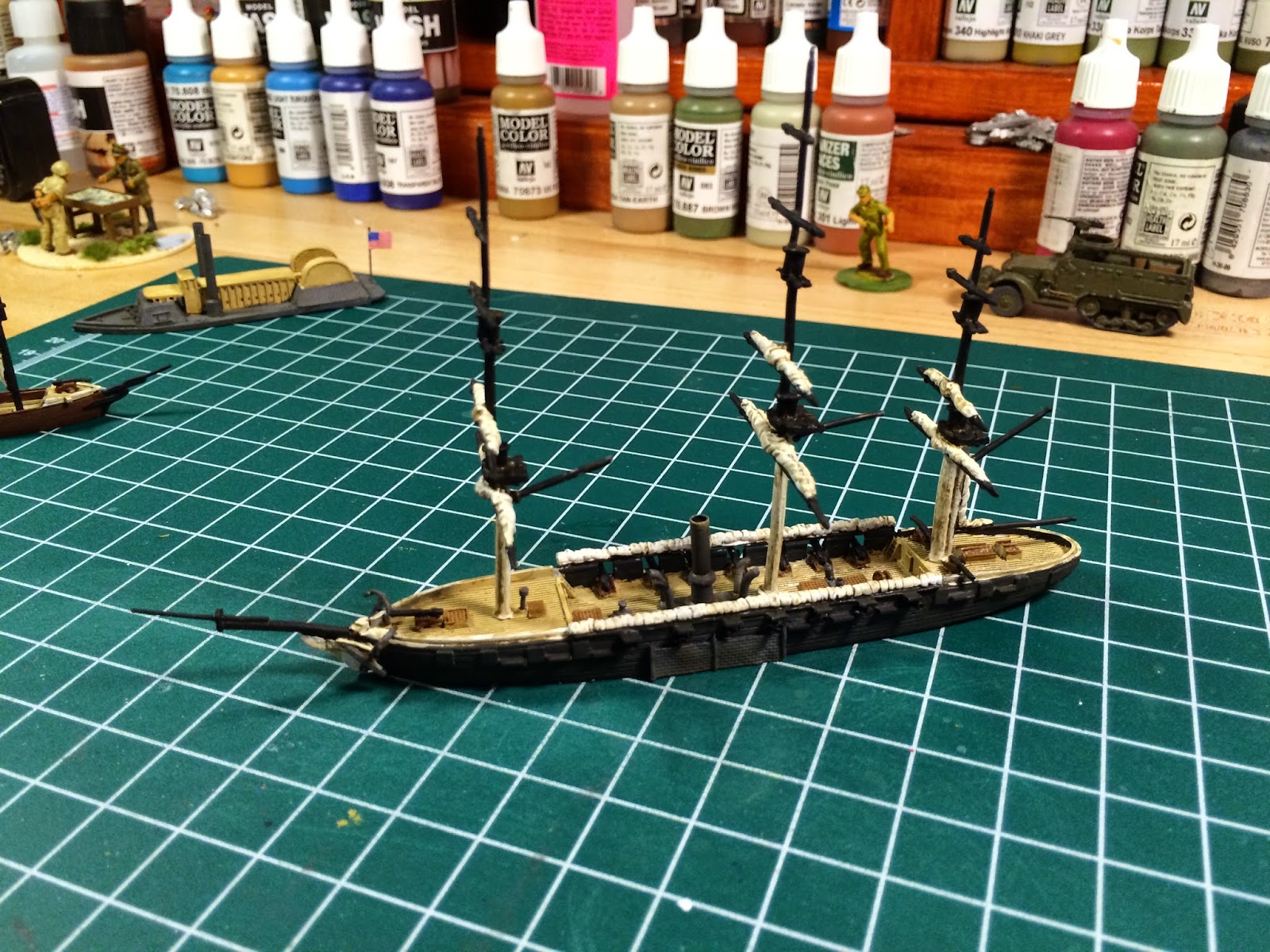 First up is the USS Hartford a heavily armed screw Frigate and flagship of Farragut's fleet at the Battle of Mobile Bay.  I haven't really done the model justice but it was a ;lot of fun to put together.  It had 40 pieces and was a bit tricky but well worth the effort.  My apologies for displaying her with out rigging but I've run out of thread and have some on order. 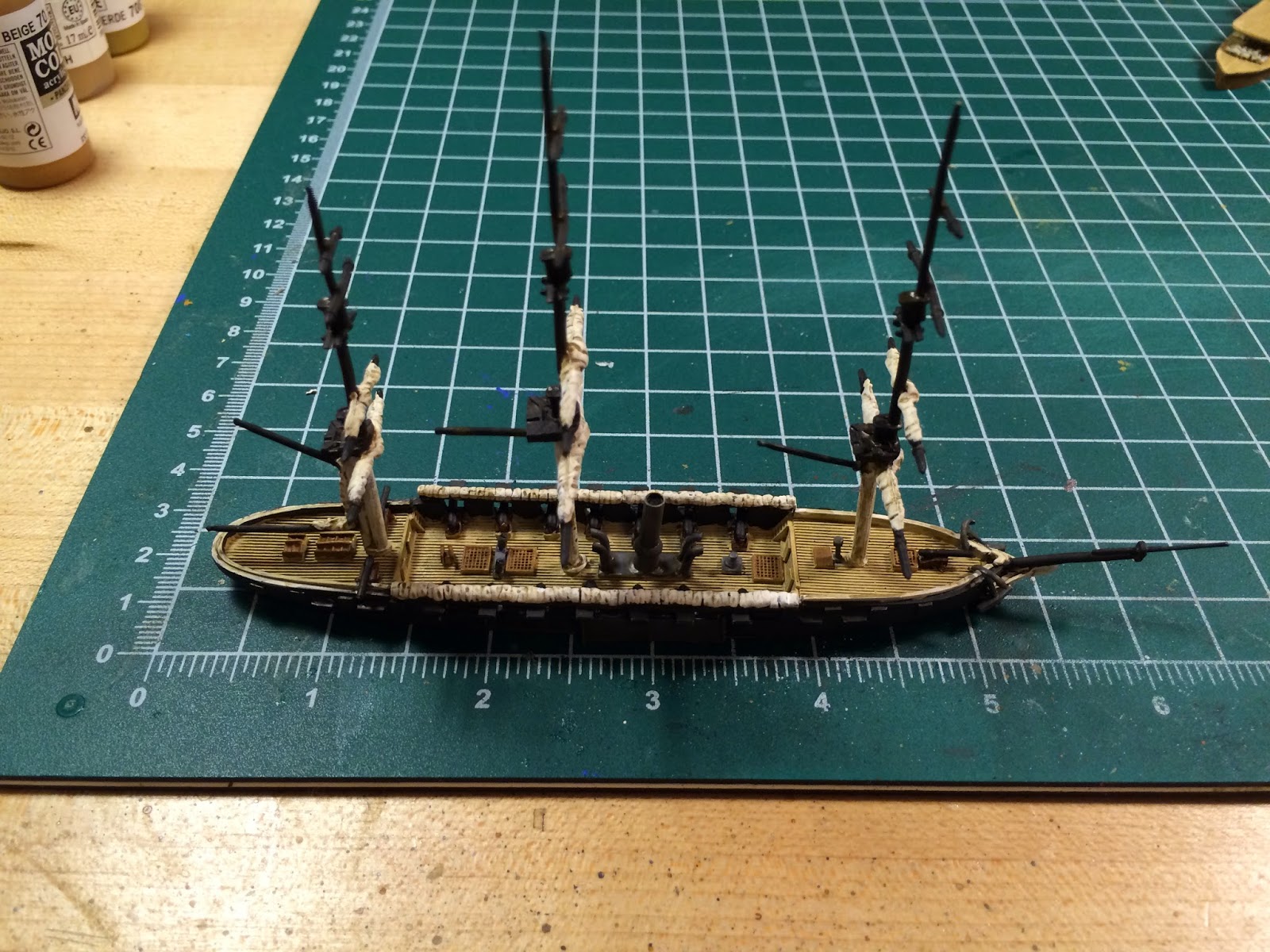 Her armament included a number of rifled guns which will give her a range advantage over the Warrior in their upcoming battle.  Who will prevail? - that will be up to the players at Historicon! 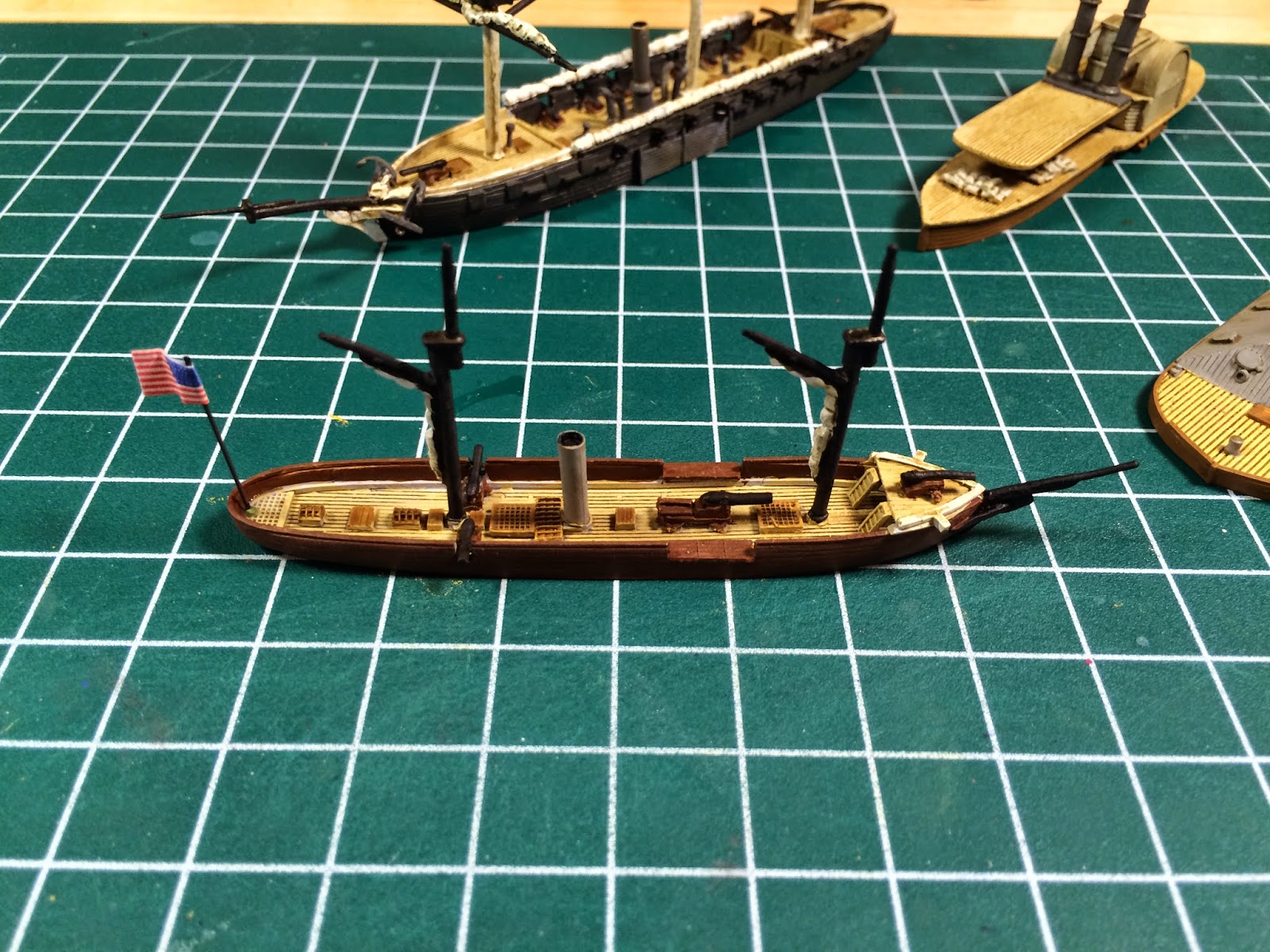 Next up is the Itasca, on of 23 Union 90 day gunboats that were built during the war.  At least one Itasca class ship served in ever major naval action, including the class namesake which served in the Gulf blockading fleet and fought at Mobile Bay. 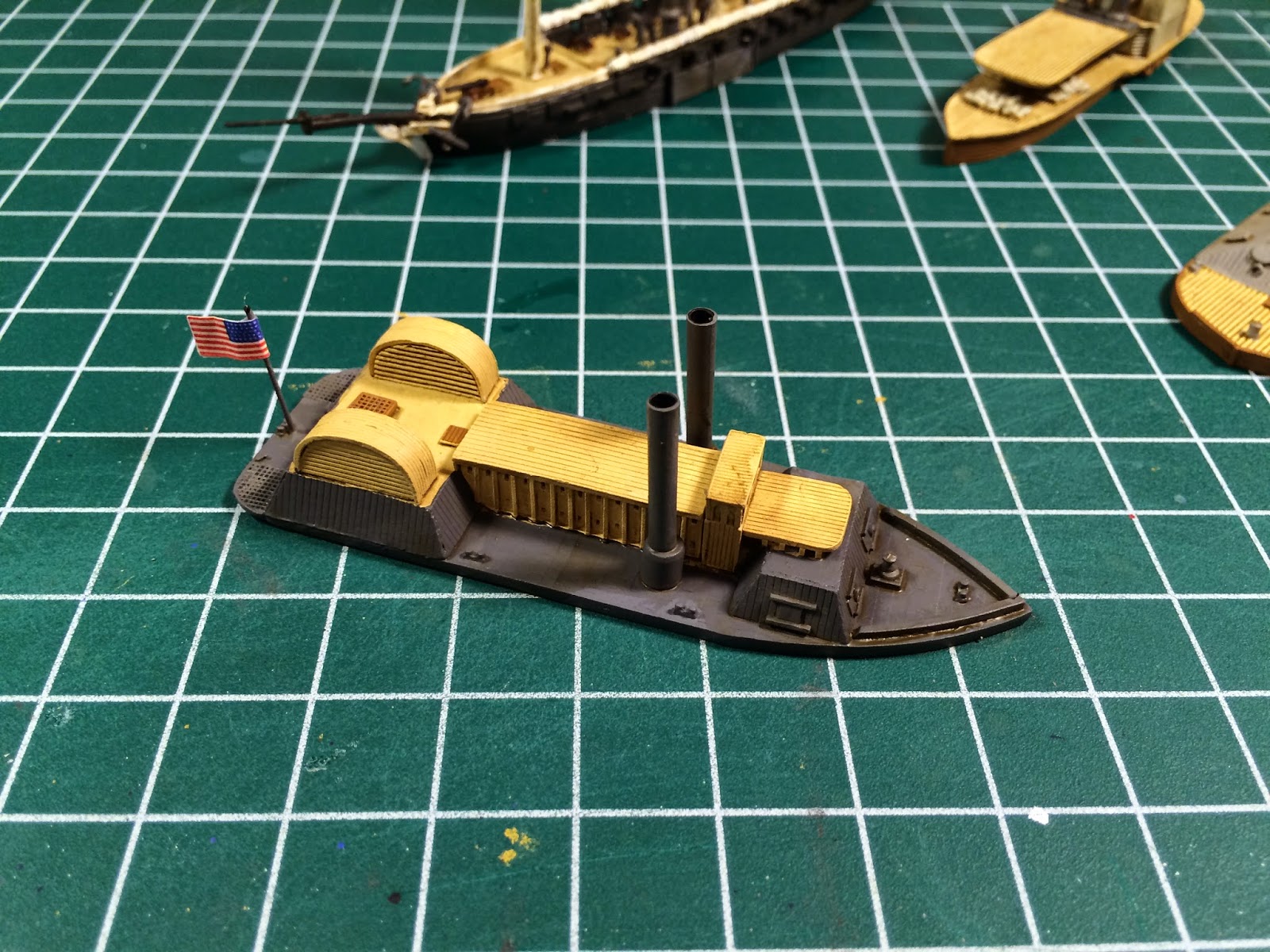 The las Union ship is the ill-fated Indianola - a casemate ironclad that was poorly built and lost at Vicksburg. 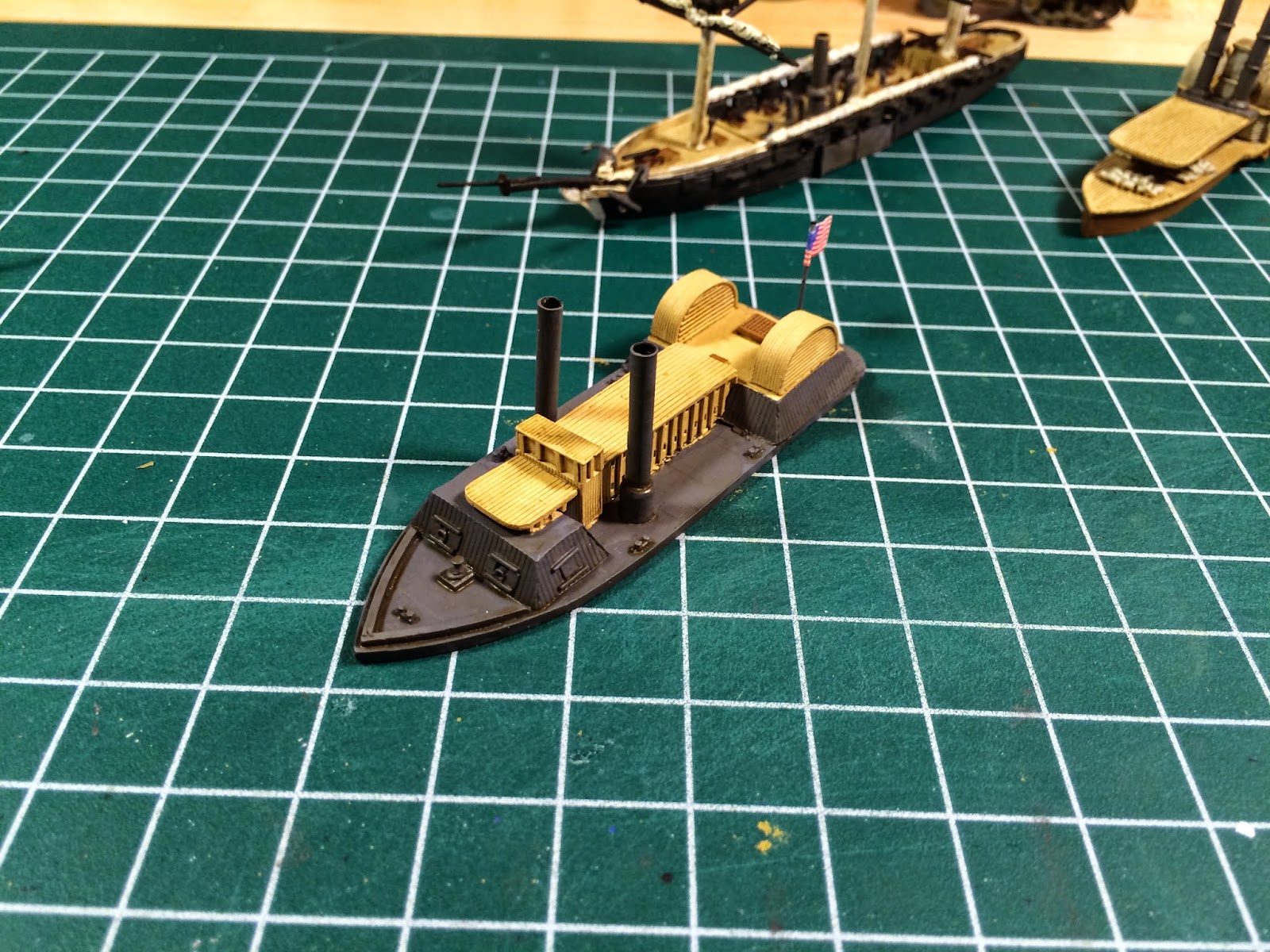 Hopefully she has a more successful tabletop career. 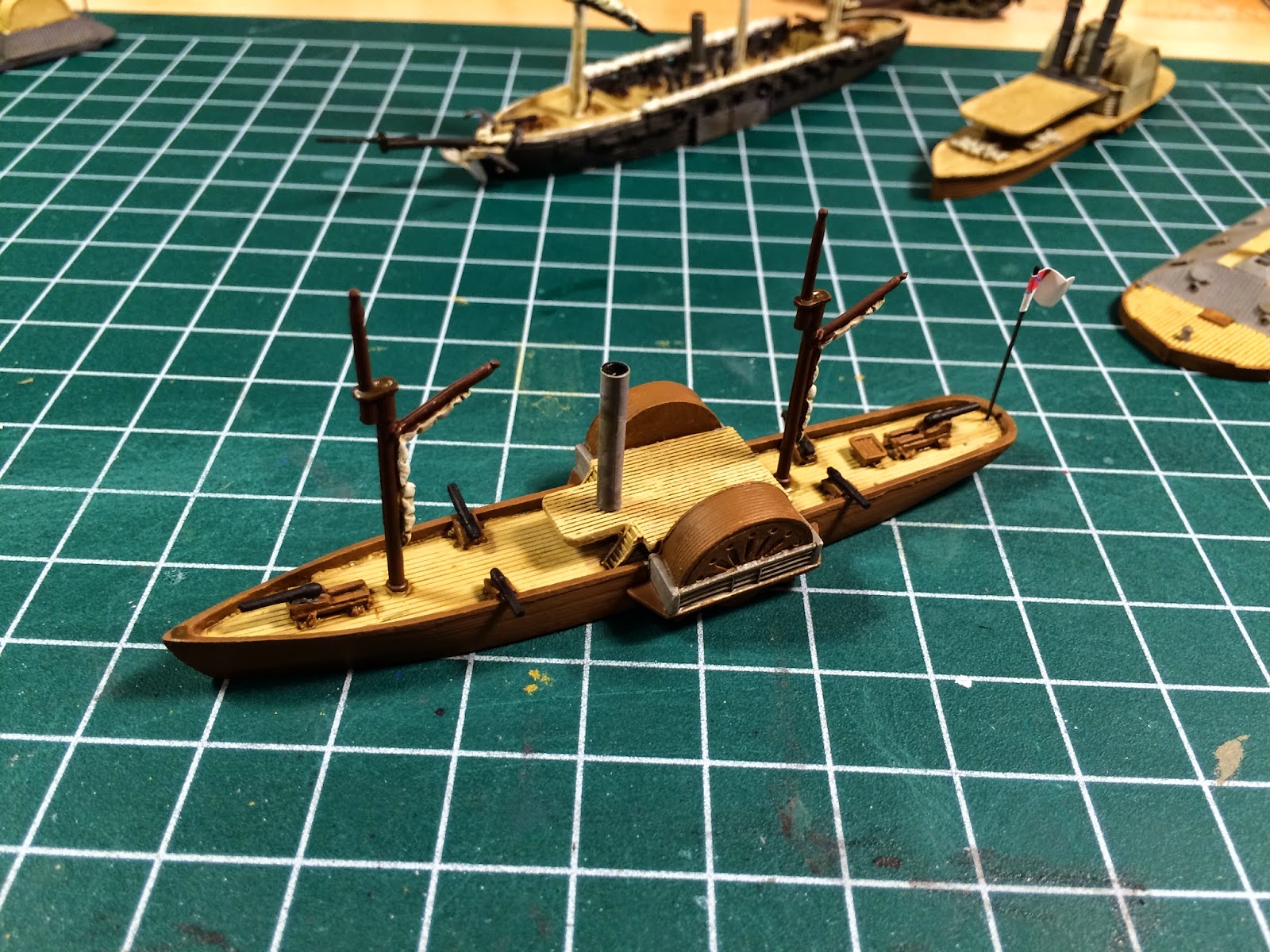 The first Confederate ship - the CSS Gaines.  The Gaines (along with her sister ship, the Morgan and the ironclad Tennessee) made up the bulk of the Confederate navy at the Battle of Mobile Bay.  After sustaining heavy damage, the Gaines was run aground by her crew and set afire.  Her remains now form a fishing reef in Mobile Bay that I visited many times as a kid growing up in the area.

I have two longer term naval hobby goals - build the entire Trafalgar fleets in 1/1200 and the Battle of Mobile Bay in 1/600.  In terms of Trafalgar I've finished 41 of the 73 ships.  For Mobile Bay I've only got 10 of the 22 ships that fought there - so a bit more work to do for both projects. 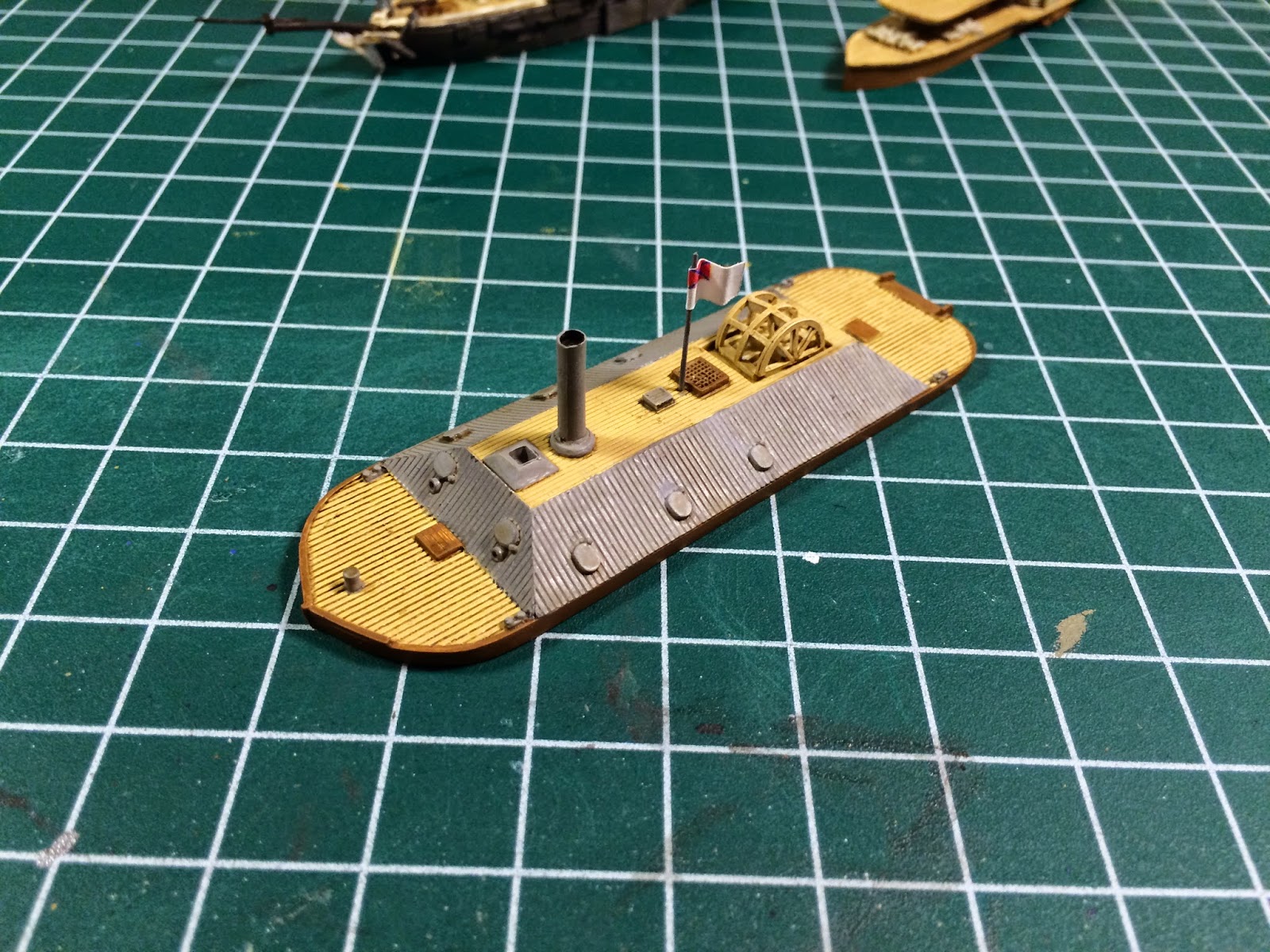 The last CSS ship is the ironclad Missouri.  Yet another ill-fated ship - she was built to Shreveport, LA and intended to serve on the Red River.  Unfortunately, low water levels kept her trapped in the dock for the majority of the war so she really didn't do a lot.  The Missouri had a very interesting and ungainly propulsion system design - a centrally mounted and largely unprotected paddle wheel. 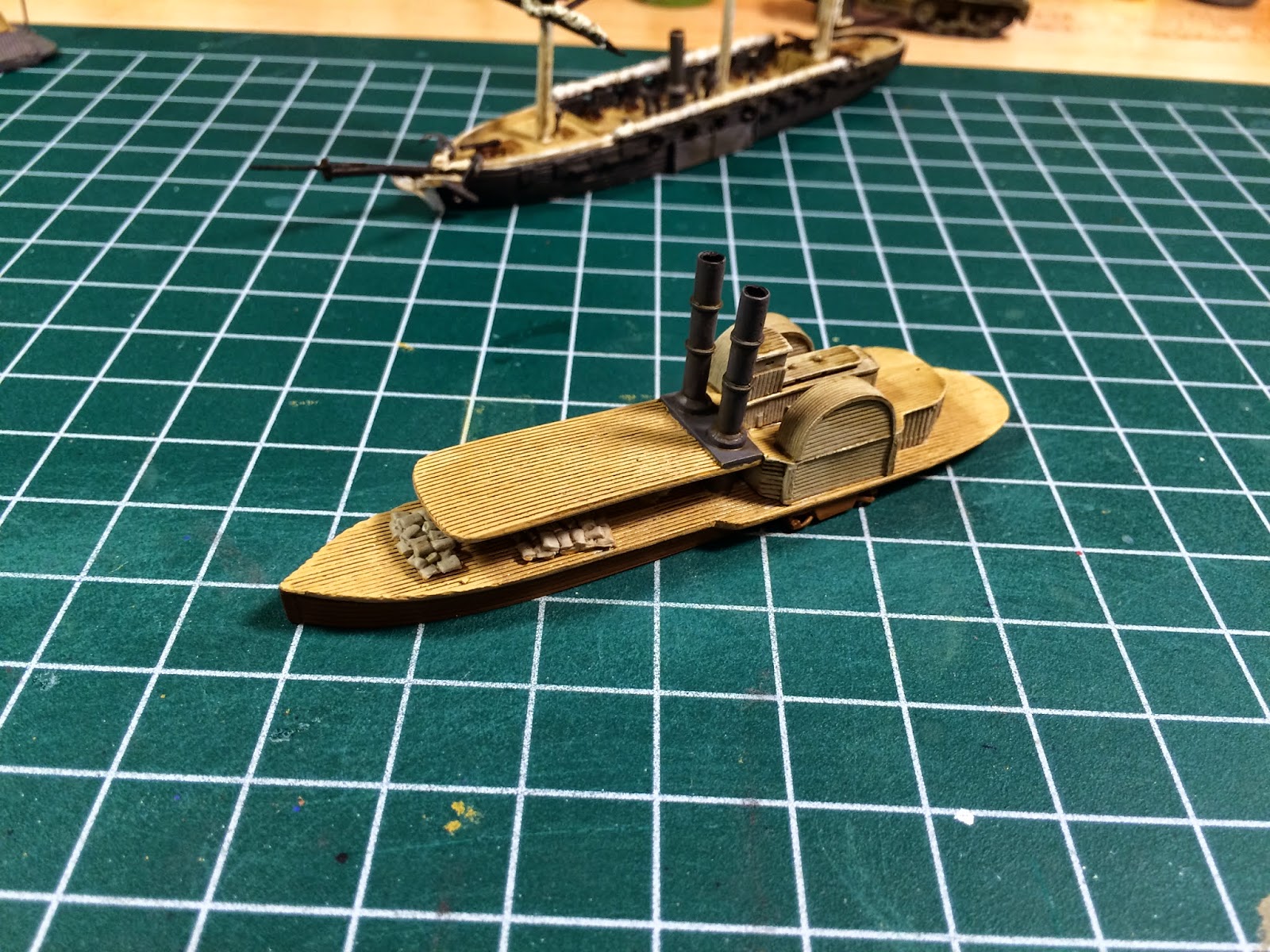 Lastly, a generic river transport that will be used in convoy or escort games as a moving objective marker.  I just received a few more of these to build. 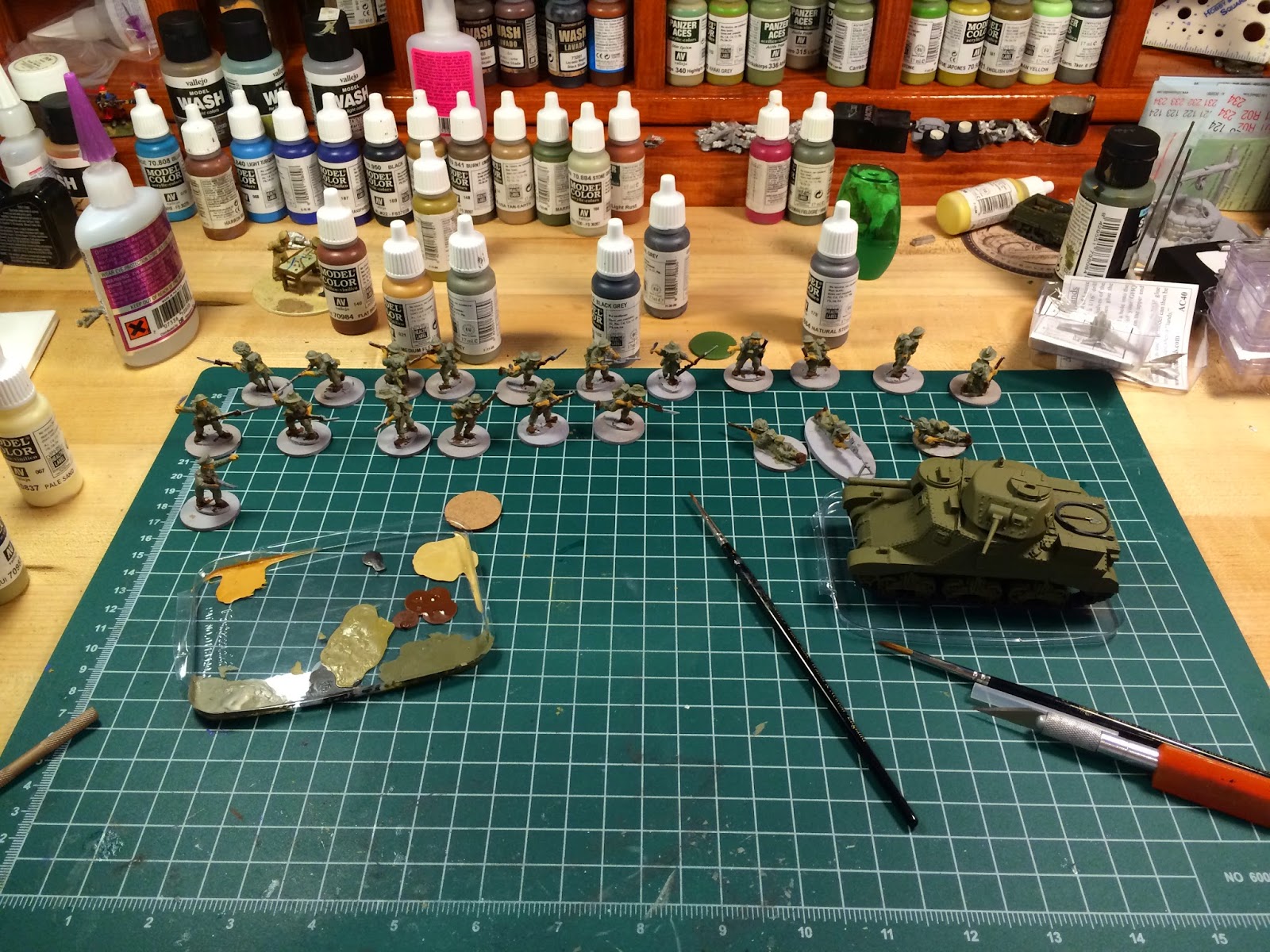 My next project for the AHPCV is a small force of Gurkha's in 28mm scale and a M3 Grant tank.  The figures are metals from a Warlord Box set that has 21 figures (1 Officer, 2 Bren Gunners, 18 Riflemen).  The Grant tank is a Resin Model from Blitzkrieg miniatures.

At the risk of sounding like a grumpy gamer, I do have to say the casting quality of the Gurkha's is abysmal.  I spent over 6 hours cleaning flash, tailings and repairing the figures before priming them.  I like how they eventually came out but will likely stick to only Warlord plastics in the future.  Warlord's plastic kits have become superb and are well worth the investment.  The metals, well, not so much.

The M3 Grant is a superb resin kit - easy to put together and just 3 flicks of the X-acto knife's worth of clean-up work.  Both units will be painted up for service in Burma.  My current British army has dual painting theme - roughly 3/4's are Western Desert / Italy and the remaining third (the Gurkha's and some vehicles are painted for Burma).  While a bit "gamey" I can mix the forces and the different painting helps my opponent keep track of where the dreaded Gurkha's are on the board. 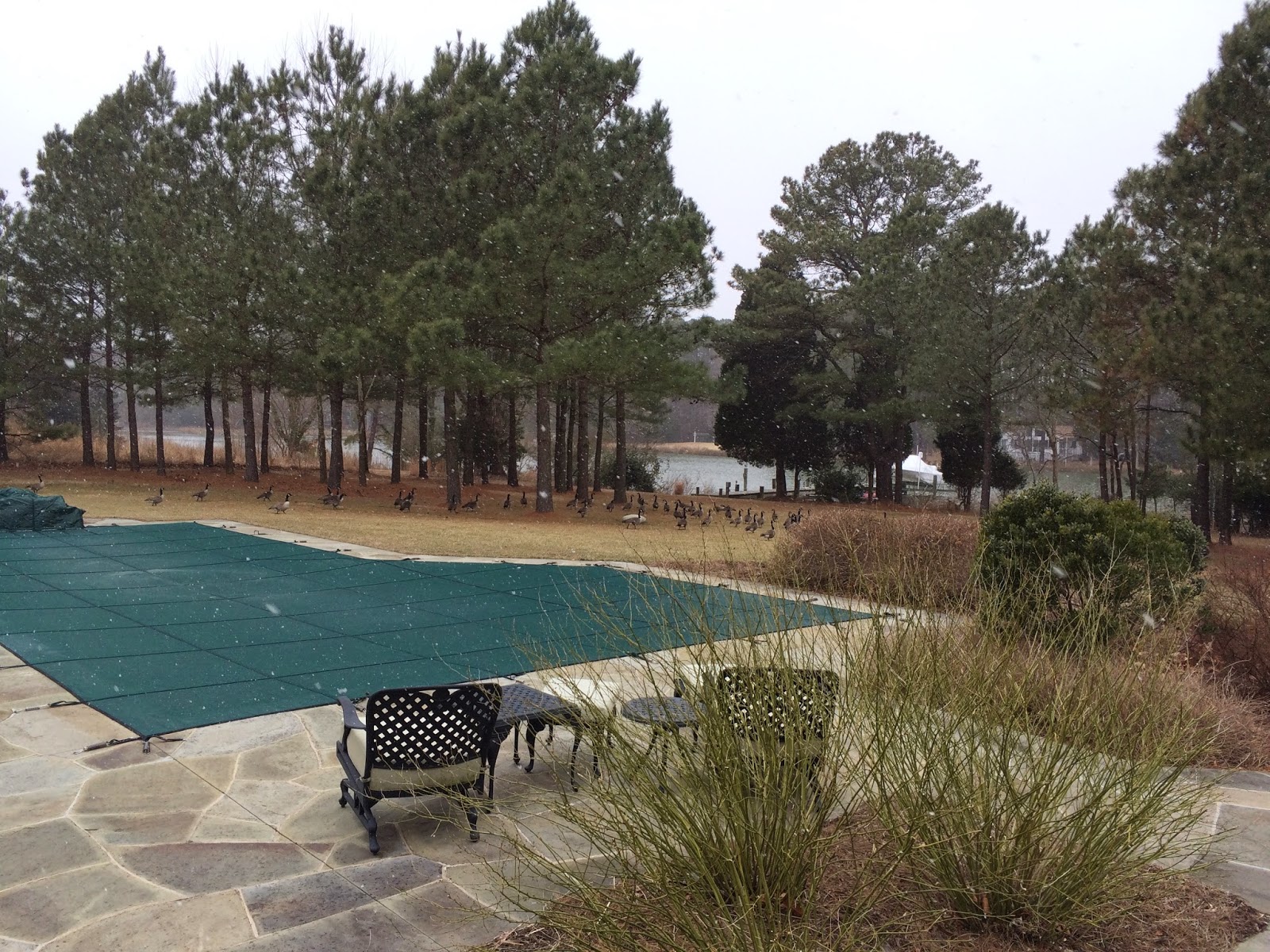 I didn't get a lot of sleep last night due to the cold - it was -20F with the wind chill.  Why?  One of the charming things about the Chesapeake Bay is it's where Canadian Geese choose to winter - we'll get a couple thousand of these waddling lawn fertilizing machines in the Broad Creek and they're not bad to have around (as long as one doesn't where dress shoes while walking through he yard!).  There is one drawback - when the temperature drops to 15F or lower they tend to honk at night and the colder it gets, they louder they are.  They were very loud last night!

6mm Micro Armor for Fate of a Nation 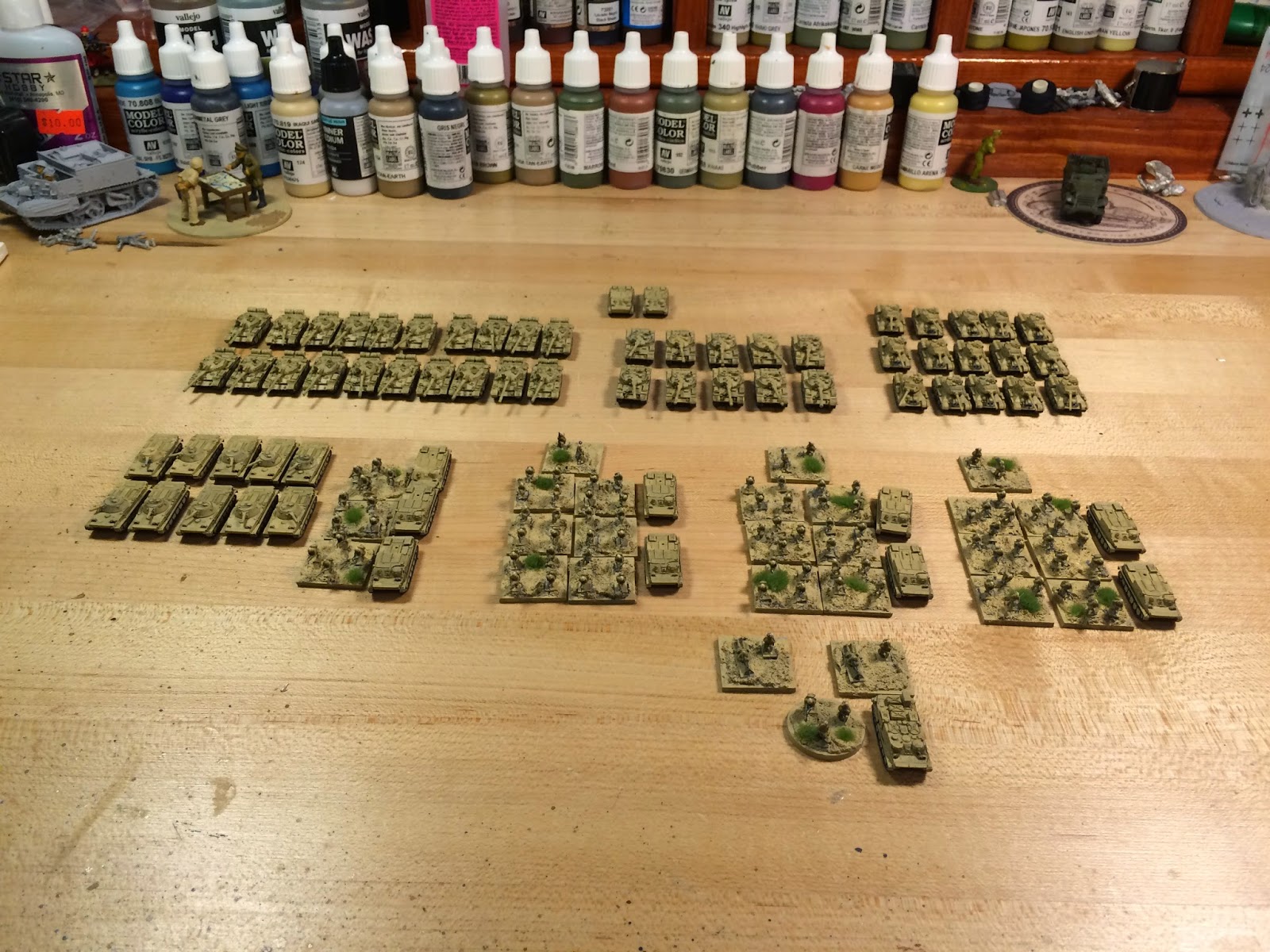 I like using the FOW rules with 6mm minis and it's a cost effective way to field large formations when trying out the new rules.  All of the mini's are from GHQ.  The armor models are superb but the infantry are not the best. 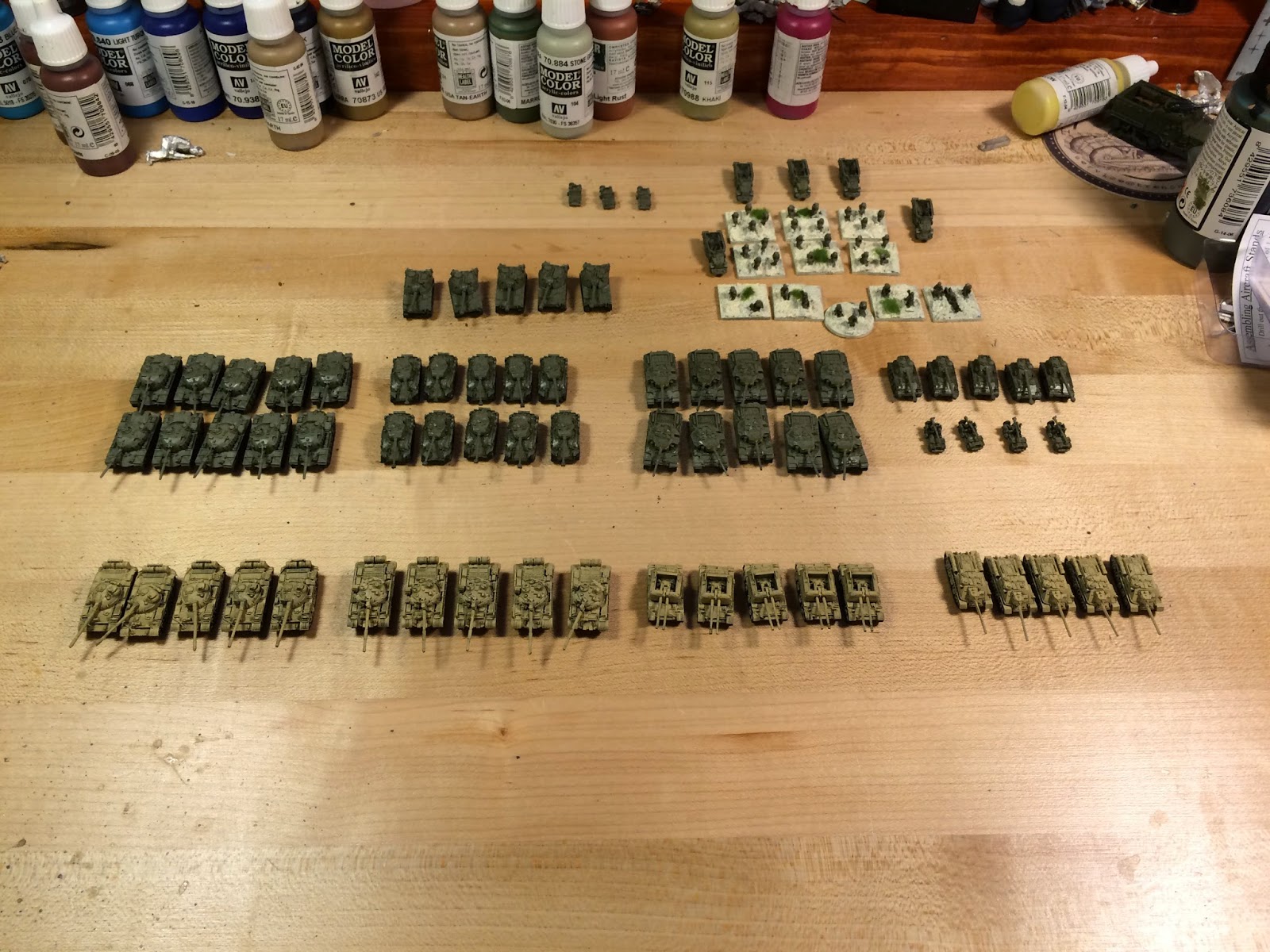 I'll put up a battle report soon
Posted by jmilesr at 6:40 PM 5 comments: 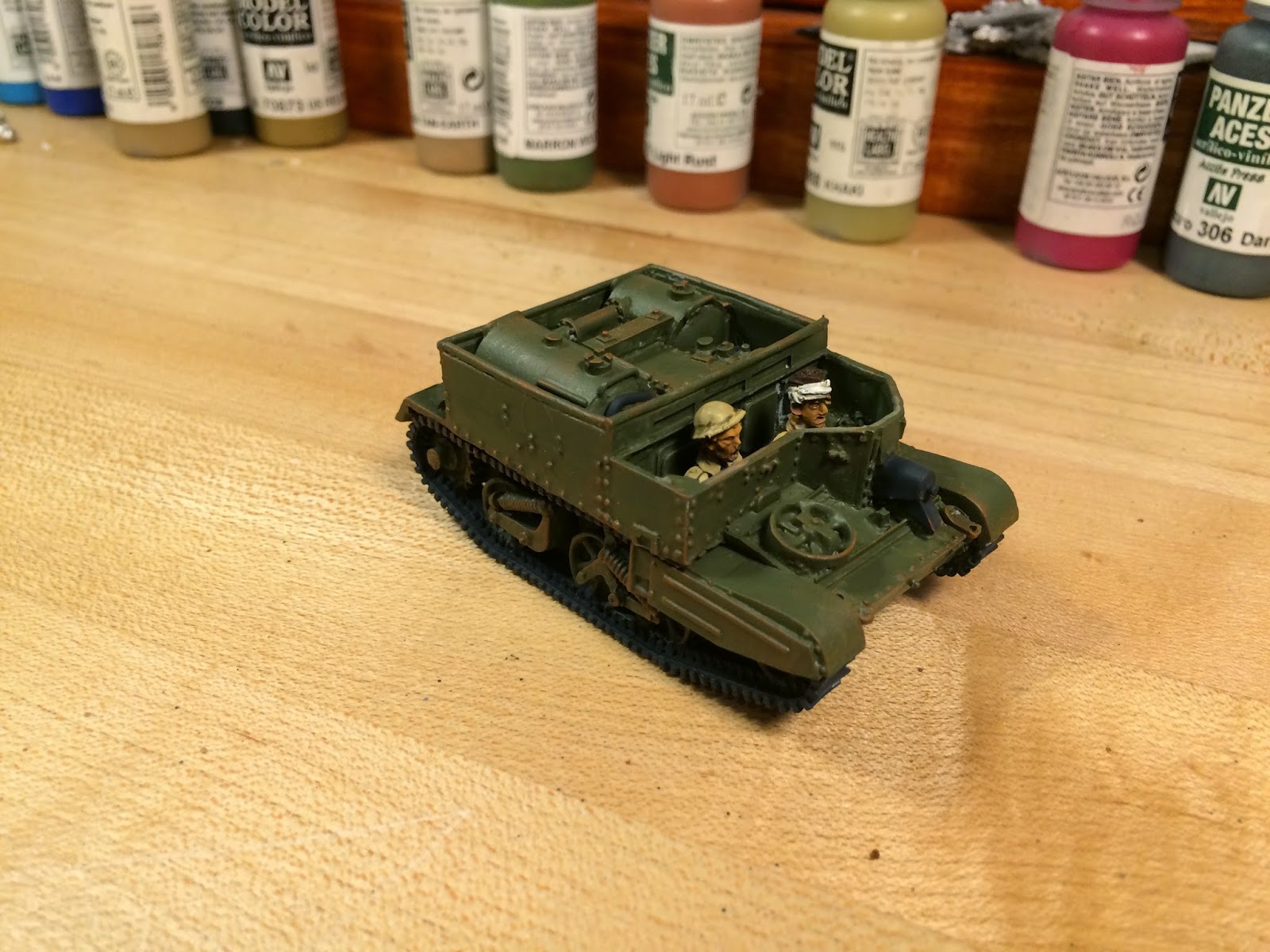 I've added a 28mm scaled Wasp flamethrower tank to my British force to give them a little more "punch".  The model is from Warlord and comes as a single piece resin cast with metal heads for the crew.  The casting quality was very high which was a pleasant surprise as I've had bad luck with resin vehicles from Warlord. 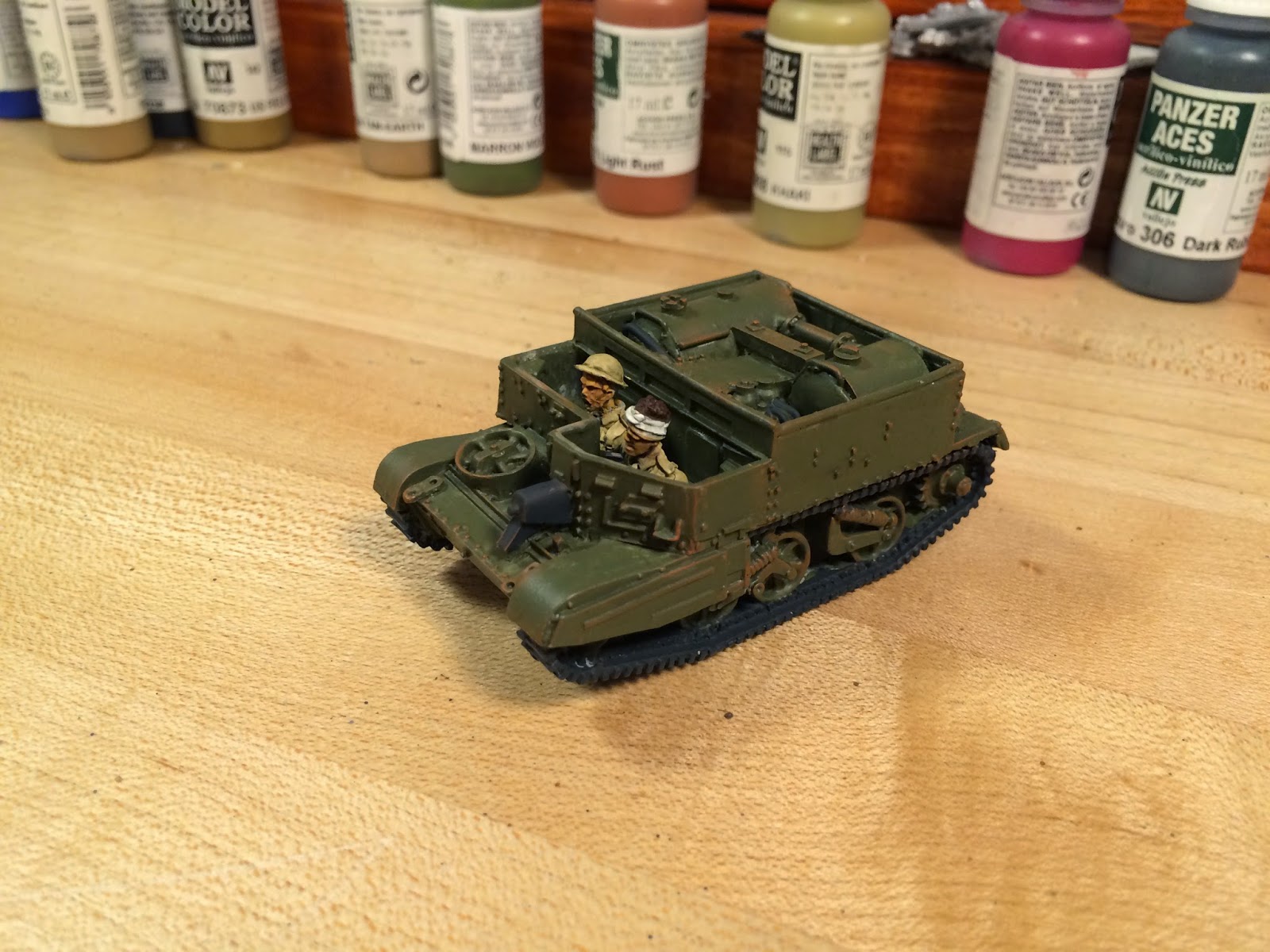 I went with a very simple paint job but decided to paint the carrier for use in the Pacific rather than the desert.  Most of my Brits are painted up as 8th Army in the Western Desert but they can also serve in the Pacific theater if needed.

We're almost 2/3rd's complete with the Challenge and I surprisingly still remain "ahead of plan".  My current points tally is 2,070, which is a bit higher than Curt's official tally as it includes the points for two fortnight challenges (Hot and Comedic) which have been completed but not yet scored.

Progress will be limited as much on my free time is consumed with robotics coaching as the team is doing very well and we have a very legitimate shot to go to the World Championship.  The whole work thing is also getting in the way but one does have to fund the lead mountain in some manner.

Next up on the workbench is the second half of my Arab / Israeli 6mm FOW project which should add another 150 points to the tally.  After that I'm unsure what will be next.  There are some support units (artillery / cavalry) from the Perry British Intervention Force (alternative ACW) line that are on back order but those will arrive when they choose to do so.  In addition to the Perry BIF, I also need to finish up a few ironclads for my Historicon game.  Lastly, there will be some more All Quiet on the Martian Front stuff because it's just fun to both paint and play.

And then - who knows.  The lead pile is very much diminished - that's always the sign of a great Challenge experience. 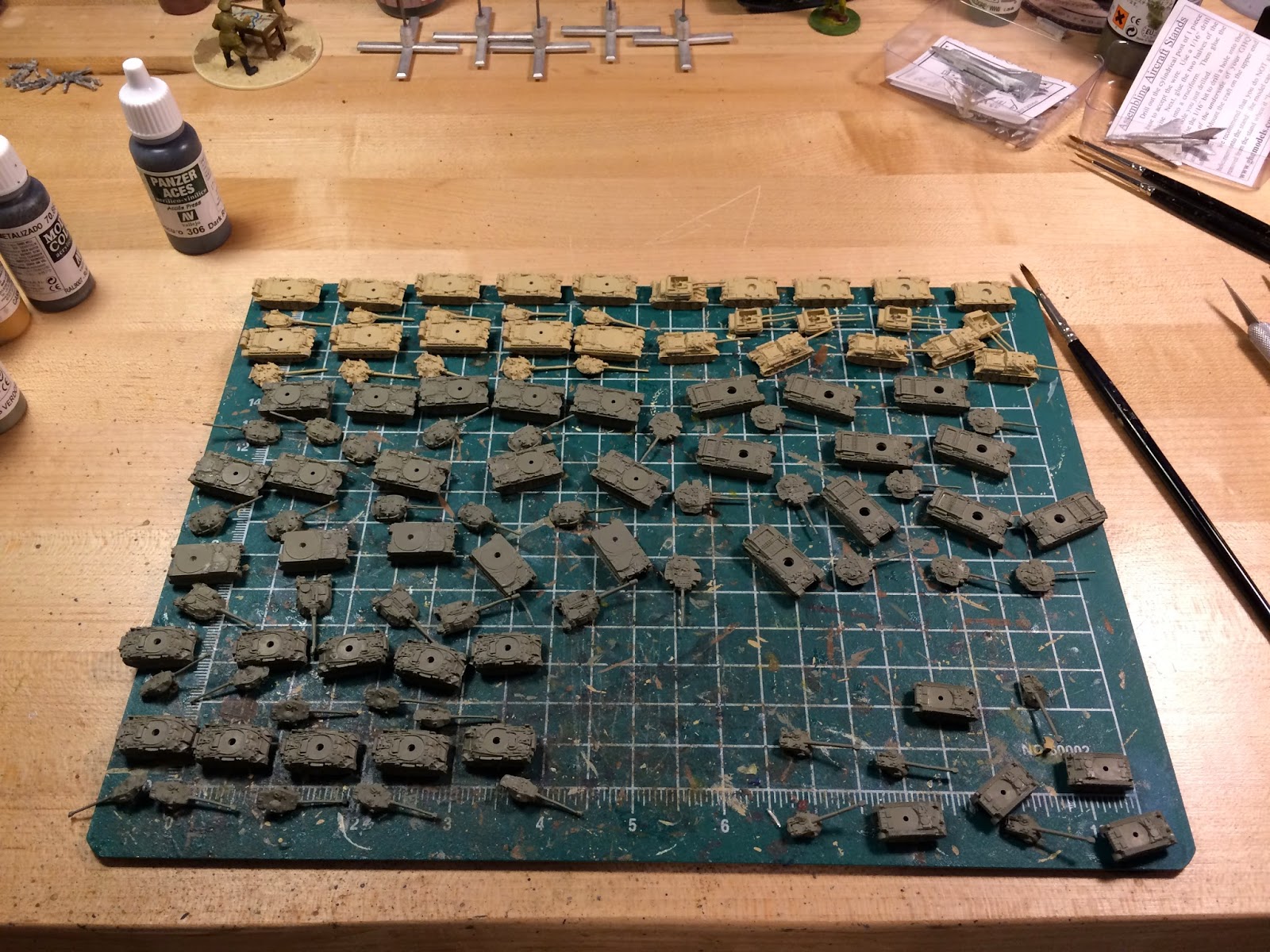 The second half of my 1/300 (or 6mm) scale Arab / Israeli project is on the painting table.  Some extra's to fill out the UAR ranks and the bulk of my Israeli armor.  All of the models are from GHQ and the high level of detail continues to astonish me

Not pictured is a Israeli mechanized Infantry platoon which is waiting to be primed. 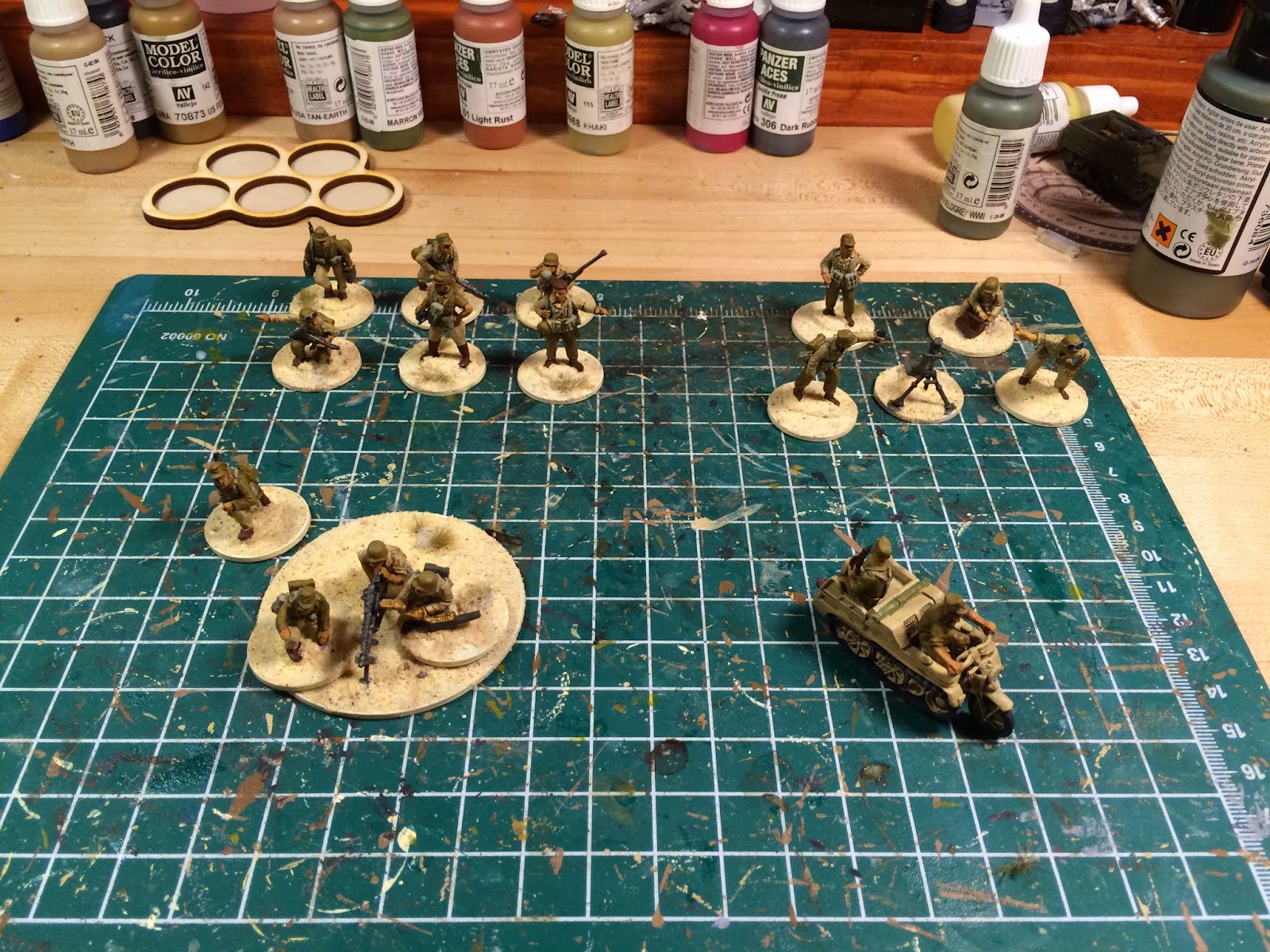 I've added some more support units to my growing DAK 28mm DAK army for both Bolt Action and Chain of Command.  All the minis are Perry metals. 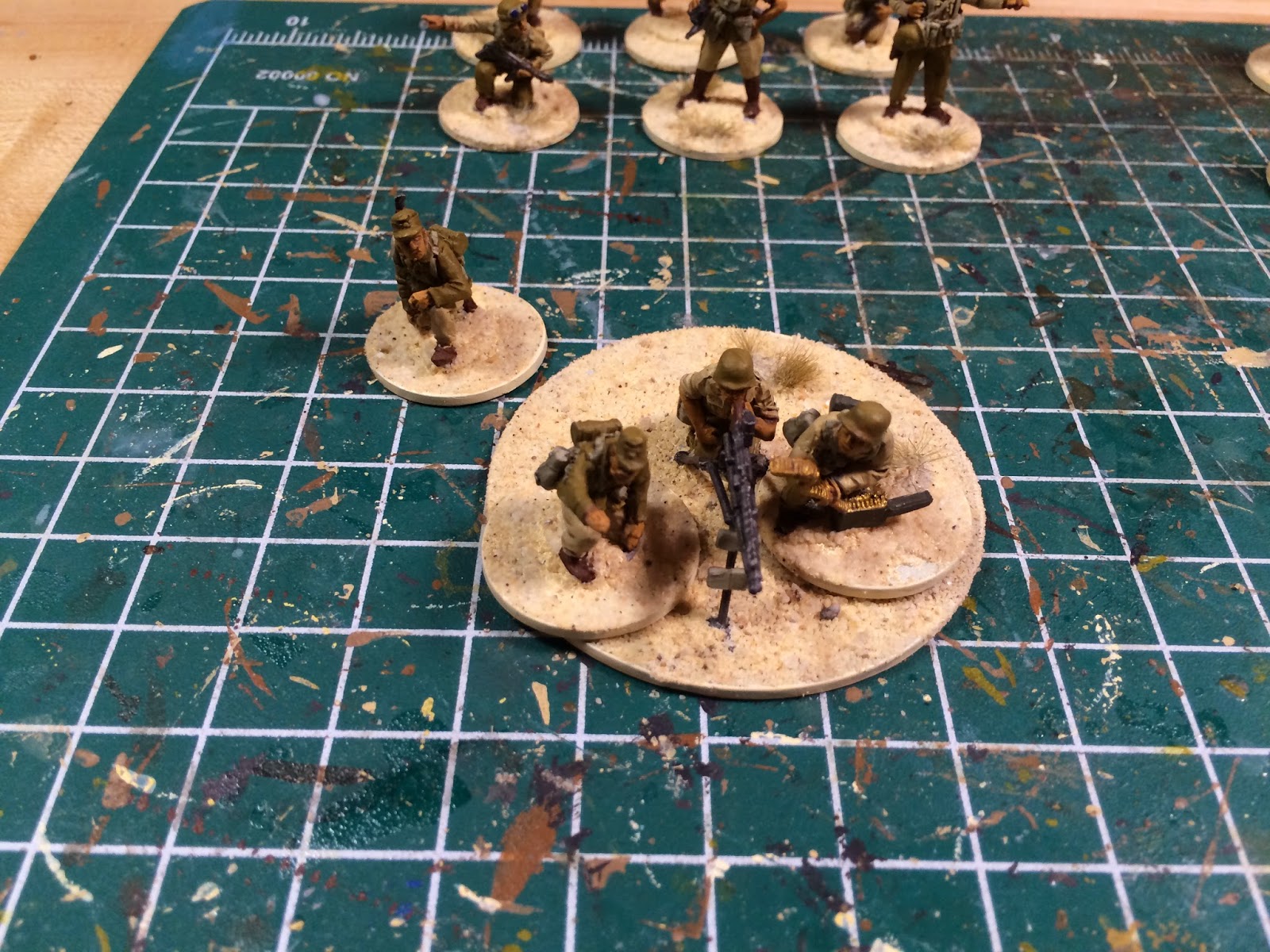 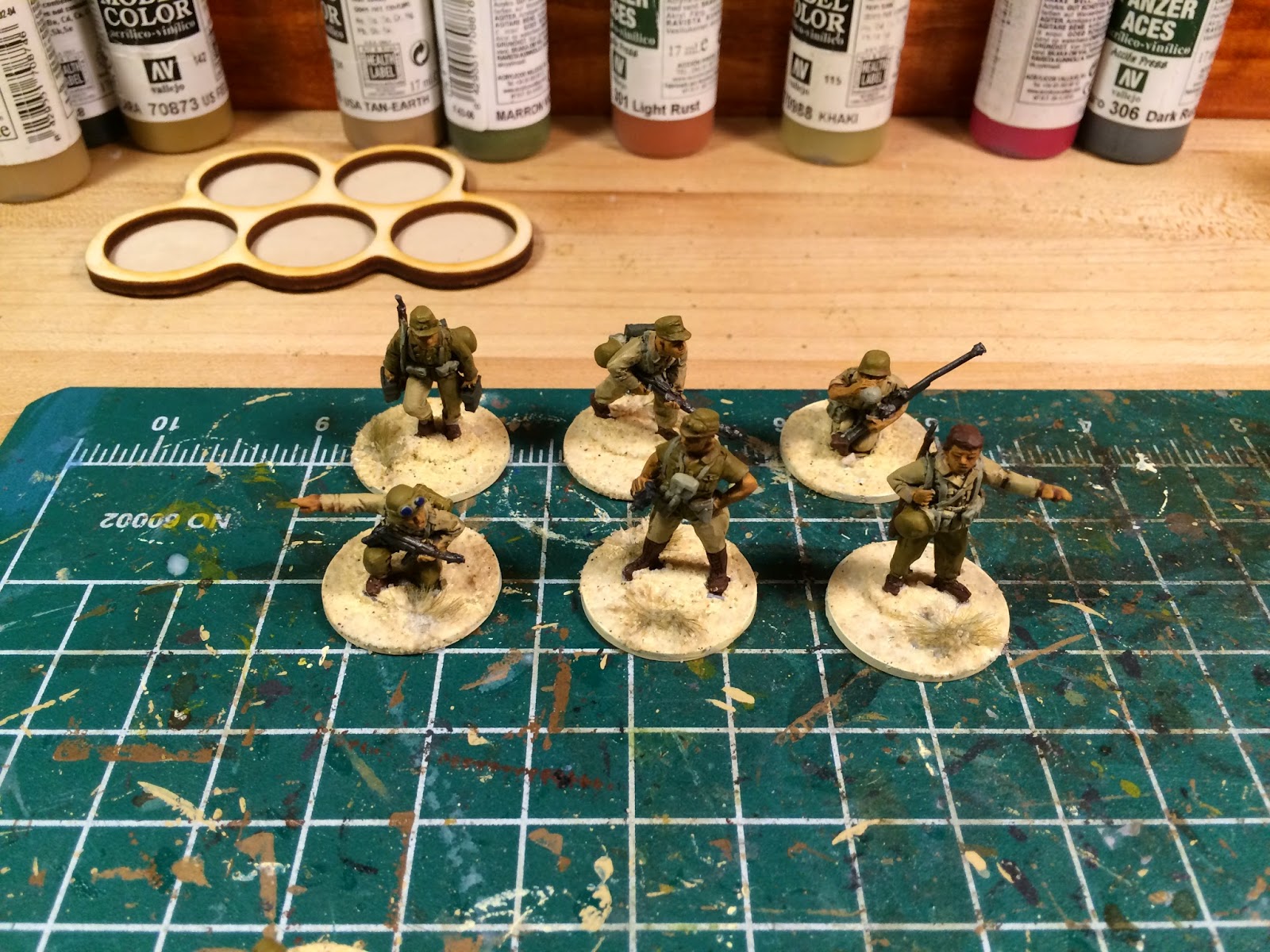 Next the Perry DAK command group 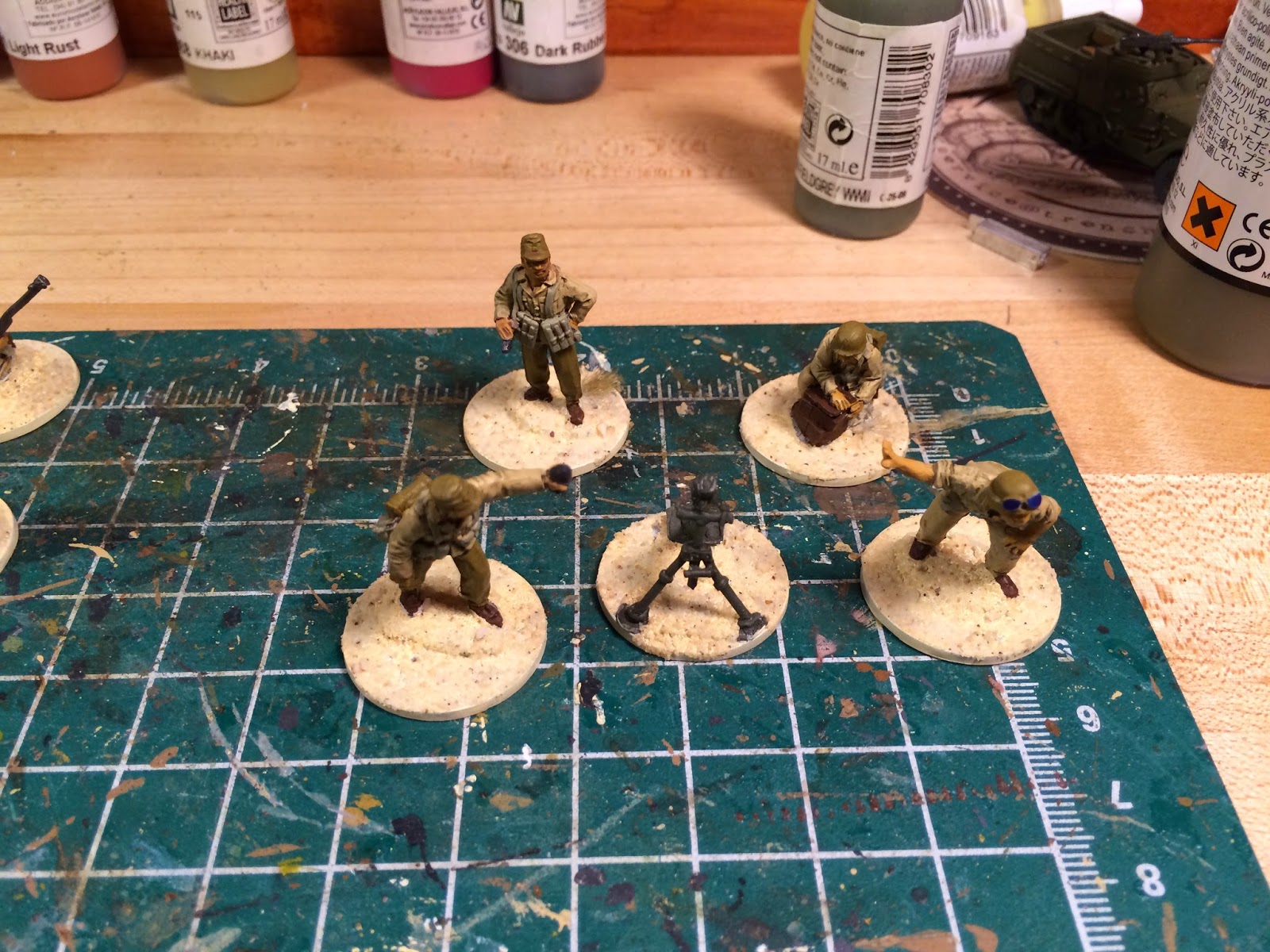 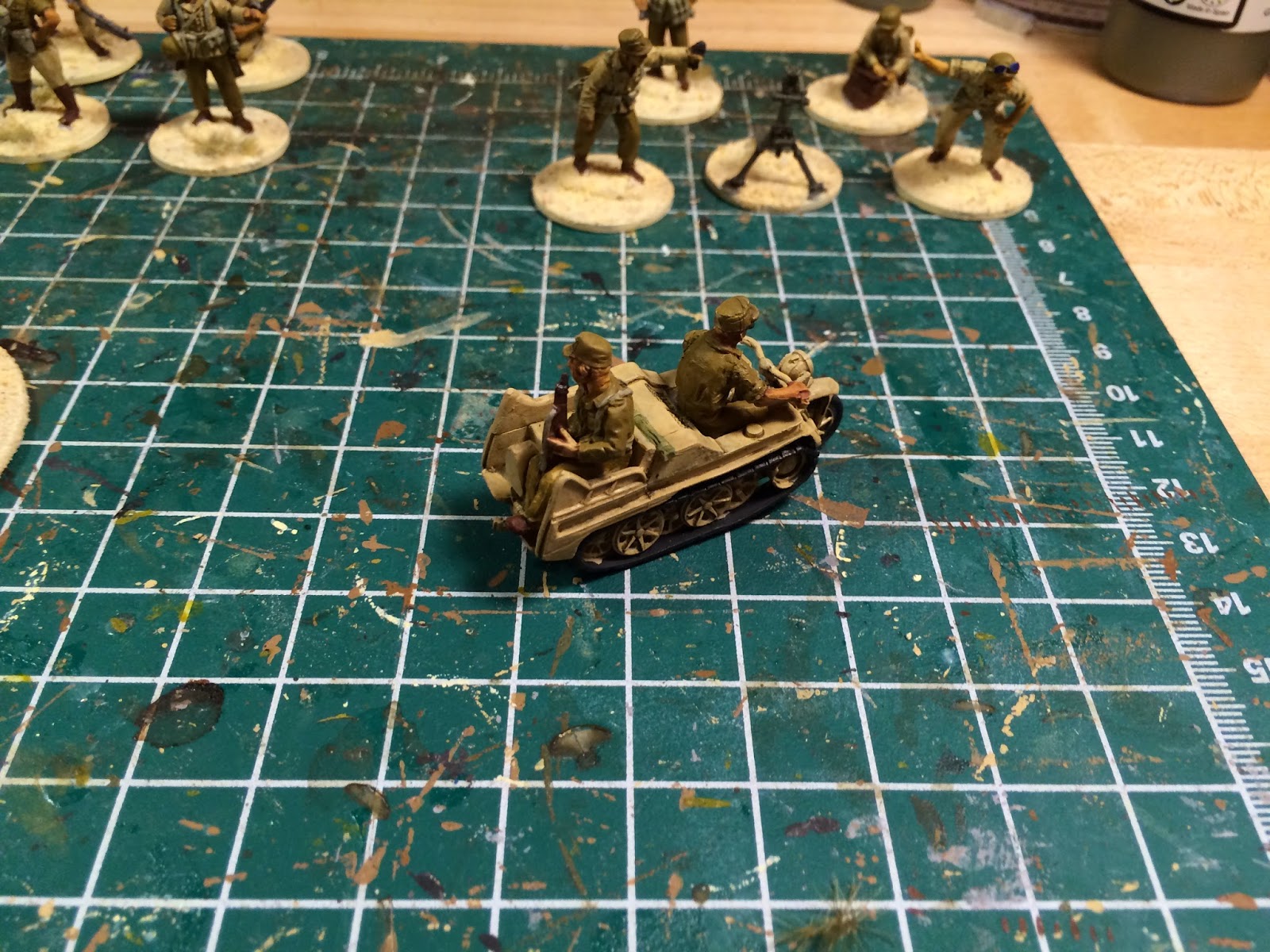 And a Kettenkrad 'cause they're cool! 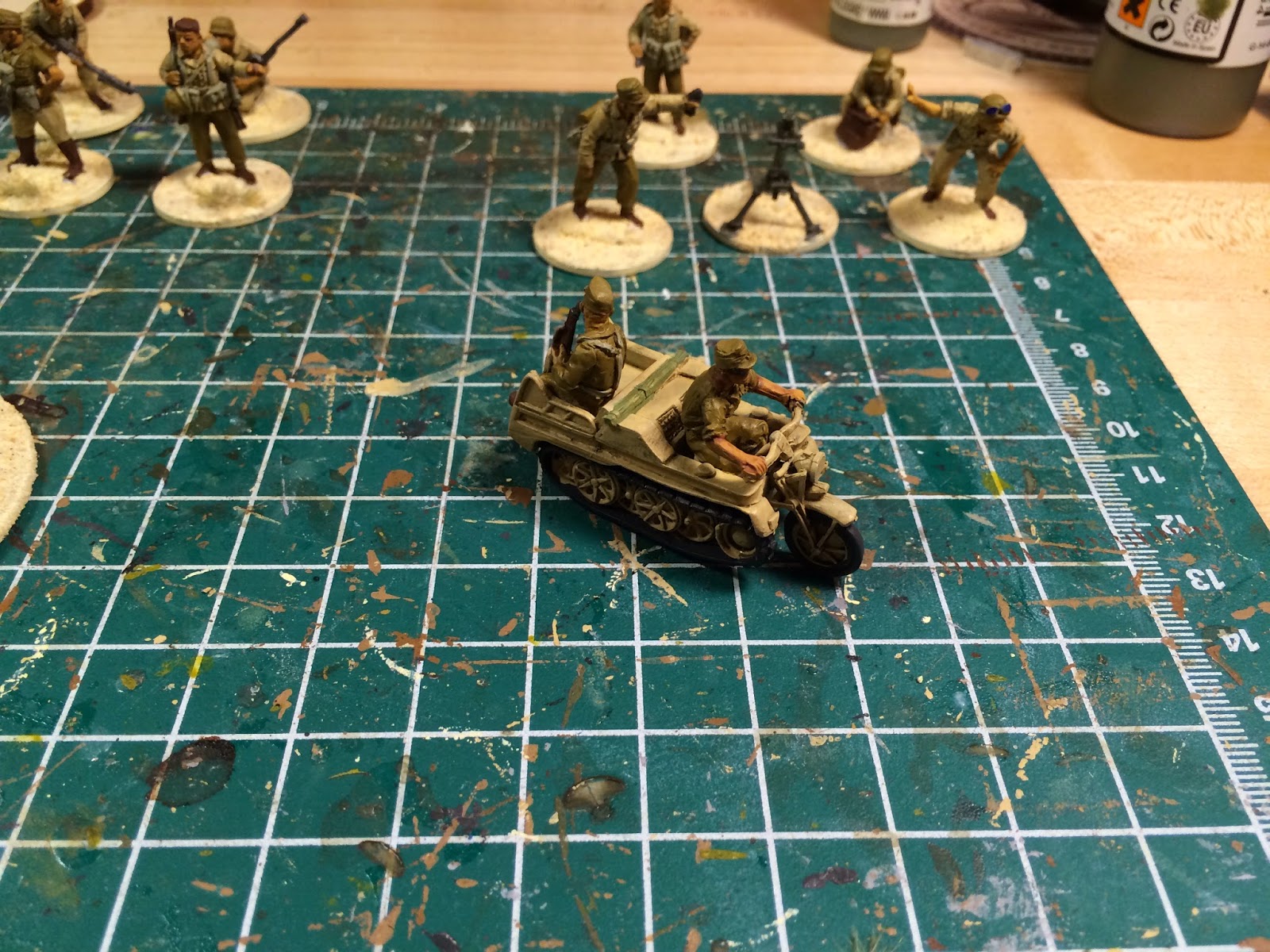 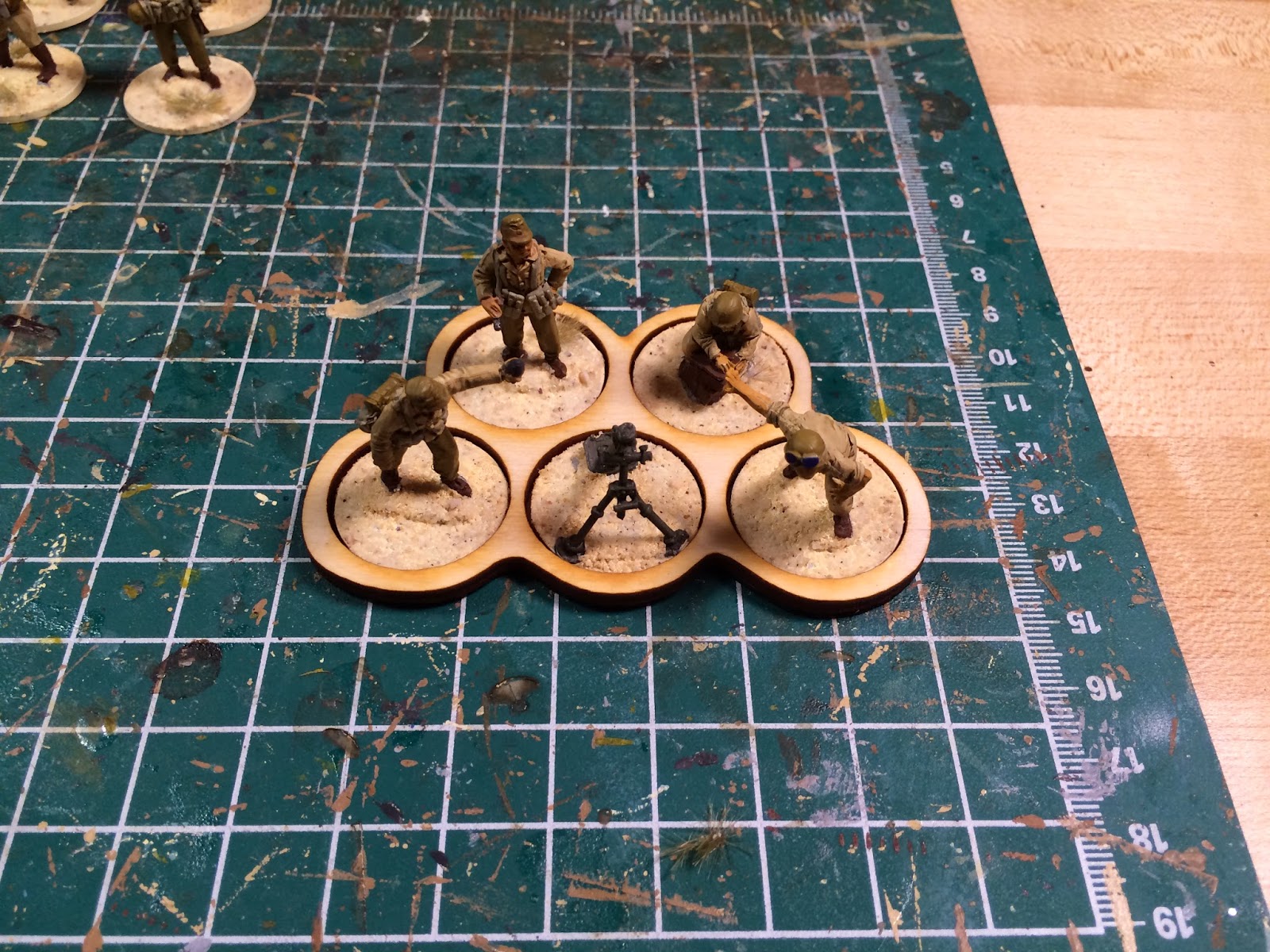 I will be trying some sabot movement trays with the mortar team - hopefully it speeds up play without sacrificing the visual appeal.  Of course I still need to scenic the tray.