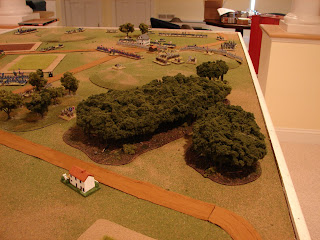 Now with the WWI Fleet project moved from "build" to "game" status, it's time to move on to hosting another American Civil War (ACW) game using my 6mm armies.  New to this game will be the heavy forrest sections that my friend, Ernie of Architects of War fame, made for me.  The really cool thing about these forests is that they have removable tops that allow for easy access to move units that are in the terrain, as you can see in the next photo: 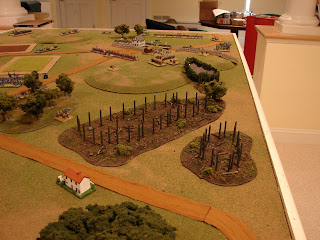 It's a very elegant solution and allows for some interesting gaming opportunities - Battle of the Wilderness anyone?  Ernie made a very useful PDF on how to make the forests which can be downloaded from the "How-To" section of his companies website.  The pieces he made for me will work with anything from 6mm to 15mm so expect also see them on Flames of War Battle reports.  In fact, Ernie has some truly impressive forest sections of similar design for larger scales (28mm+) in his personal collection - the tree trunks are about a foot long (he uses branches) and the canopy is another foot to foot and a half - amazing stuff when on the table.

I'll be making some more sections for my table.

I use Black Powder for my ACW gaming and will designate the new forrest sections as "Heavy Woods".  Normal woods add a +1 to saving die rolls but the "heavy woods" will add a +2 and visibility is limited to a base width (60mm).  There  will also be some special movement rules that can result in units getting "lost" and disorganized when moving through the woods.  I'll spring those upon the players and let you know how that aspect works.
Posted by jmilesr at 7:55 AM 3 comments: 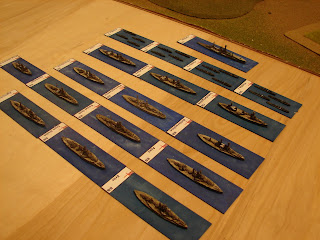 I finally finished my WWI fleets.  All the models are 1/2400 scale from GHQ and they are really top notch.  They're also a bit on the pricey side but this is a case where you get what you pay for.  The British fleet consists of 8 Battleships, 3 Battlecruisers, a Old Dreadnaught, 4 Destroyer flotillas, an early Aircraft Carrier, and an American Battleship.  It totals 18 ship bases. 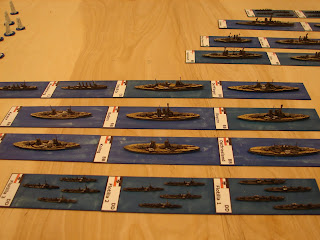 The German fleet is a bit smaller, but still powerful as it boasts 6 Battleships, 2 Battlecruisers, 2 Light Cruisers, and 3 Destroyer flotillas for a total of 13 ship bases.  While the brits out number the germans, but the german ships tend to be a bit better so the advantage isn't that huge.  Out first test games, using the "Naval Thunder" ruleset and three ships per side were a blast. 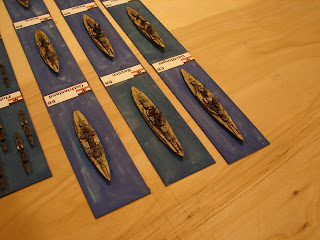 Here's a closer view of the German Fleet.  I think the models came out nicely and building / painting them was a very nice break from 28mm figures.  I'm still experimenting with the sea color for the bases.  I'm leaning towards the lighter blue version which can be seen on the lower left Destroyer flotilla base or the middle front Battleship. 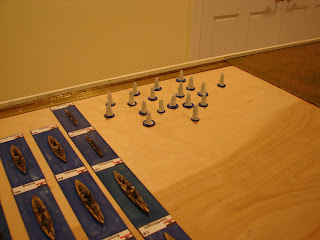 Both WWI naval rulesets that I use require splash markers to show which ships has been shot at - the rule concept is that ships become harder to target when multiple ships fire against it due to the shell splashes obscuring the target.  The markers are made from old washers, drywall anchors and Woodland scenics water effects.  My friend Ernie made me some other markers out of foam that are a lot nicer so I'll be copying those in the near future.

While there are a handful of ships remaining to be built, I think this will be all in the WWI naval category for now.  I have a very busy few weeks coming up - a business trip to Buenos Aires (always a nice city to travel too), hosting a 6mm ACW game for my club), and starting yet another army and period (28mm Imperial Romans).
Posted by jmilesr at 7:25 AM 5 comments: 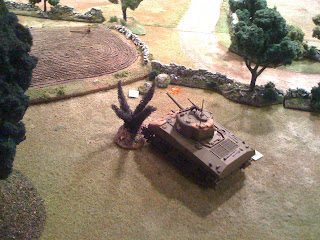 Last Saturday night Sean and I played in the second of two test games with our game club, ECAMGA, at Ernie's house.  Ernie, of Architects of War fame, was trying out some of his scenery and some homemade skirmish rules for WWII.  The first picture shows a shot from my son's anti-tank unit barely missing my Sherman.  Of course, I had just taken out his mortar unit a few turns earlier and you can see his reaction in the next photo: 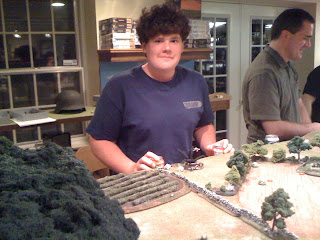 It can be fun to show a 15 year old that his old man can sometimes figure out his schemes!  Check out the cool explosion pieces Ernie came up with - very creative.  I think he'll be posting a more detailed write up of the game on his blog so I will not go into a lot of details here, except to say the rules were a lot of fun.   As with any game at his house, the scenery and miniatures where top notch.  I should point out that the machine gun nest terrain piece proved to be very deadly in the game.  You might want to pick one up while supplies last.  Ernie assured me that the fabulous dice rolling that occurred when the damn thing shot at us is a function of the kit itself and not just luck. 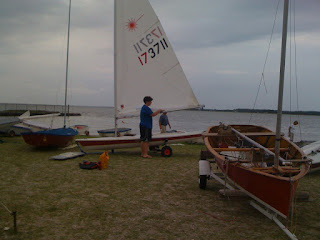 Last weekend was a busy one for Sean and I - he had a two-day regatta (Sat/Sun) and we squeezed the game in on Saturday night.  The regatta went well for Sean - he placed third in his class (full rig lasers).  The weather on Sunday was pretty bad - 25 - 30mph winds and 3 foot seas so sailing was very rough.  At one point his boat cartwheeled and he got catapulted 15 or so feet out into the water.  Most of the boats had some minor hull damage and/or ripped sails but nothing major.  The only damage we sustained was a snapped tiller extension but Sean had a blast.
Posted by jmilesr at 10:06 PM 8 comments: 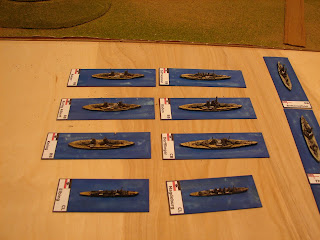 As mentioned in the previous post, I have made some good progress on my WWI naval project.  At left, is the current German High Seas Fleet, which consists of 5 Battleships, a Battlecruiser and 2 Light Cruisers. My initial try at basing is very basic for now - just black styrene plastic with a very basic sea background.  I will eventually magnetize the underside to help with storage.  The labels where made in Excel, which was extremely useful in sizing to match the bases. 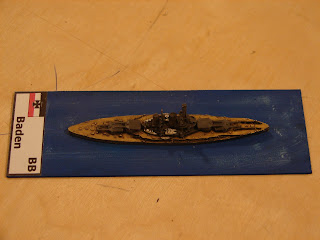 The pride of the German Fleet is the Baden, with her 15 inch guns.  The remaining unfinished Germans ships include a Battlecruiser and some Destroyer Flotillas. 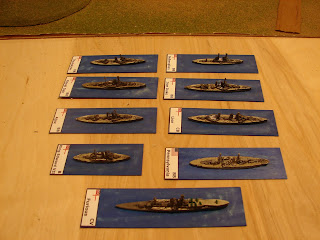 The Royal Navy consists of 5 Battleships, a Battlecruiser, and old Dreadnaught and an experimental aircraft carrier.  There's also a US Battleship thrown in for fun. 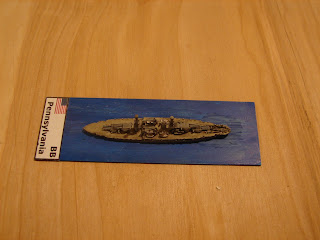 Here's a close up of the USS Pennsylvannia, sister ship to the Arizona.  It was a very powerful ship during WWi, mounting 12, 14 inch guns.  I have another unbuilt model so I can add in the Arizona. 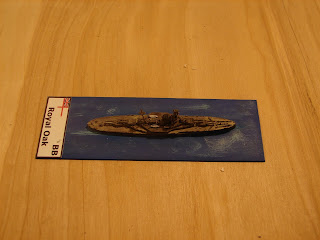 Lastly, the pride of my Royal Navy Fleet, HMS Royal Oak.  Like the Baden, it also mounts 15 inch guns.  I also have a handful of Royal Navy ships to complete including some Cruisers and Destroyer Flotilla's.  I'm hoping to get a test game in with my son tonight to try out the models on the table top.
Posted by jmilesr at 6:44 AM 6 comments:

I just received some new forrest terrain made by my friend, Ernie of Architects of War.  The pieces are really cool as they have removable canopies that allow for easier troop movement in the forests.  The terrain pieces are scaled for use with my 6mm ACW figures but also look like they can be used with up to 15mm figures also.

Ernie's forrest sections are really clever and he's posted a "how-to" PDF on their construction within the hobby section of his website:

As for progress on my projects, most of the past few weeks have been taken up with my son's sailing regatta's.  He took one first place and a second so it's been a very good week.  We've had heavy wind and that's a big factor for him.  On the hobby front, I've finished another 8 or so 1/2400 WW1 ships.  I'll post some pictures of the ships and the forrest terrain when I get a chance.
Posted by jmilesr at 7:52 PM No comments: