X-Wing by Candlelight: A Sandy By-Product

No pictures, but last night my son and I played X-Wing by candlelight as Hurricane Sandy swirled around outside us.  It was fun in a campy sort of way or as my son said (hopefully with tongue-in-cheek) "gee dad we're playing X-Wing just like the pioneers did".

The storm seems to have passed maryland without a huge amount of damage - some trees down and no power (got to love cell phones that become mobile hotspots!).  I'm typing this listening to the hum of our generator.

Email ThisBlogThis!Share to TwitterShare to FacebookShare to Pinterest
Labels: X-Wing 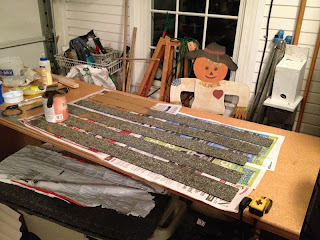 With Fall-In less than a week away there are still things to get done for Lundy's Lane - namely roads and fences.  The roads are made out of asphalt shingles that are painted and then flocked around the sides.  The benefit of using these shingles is they are flexible but will hold a shape, come "pre-textured" and their cheap.  It's a pretty clever idea that I though up all by myself - no really I did - you can trust me.

OK this isn't really my idea.  In fact I stole it and just about all of my other good gaming and terrain ideas from Ernie over at Architects of War.  In fact he has a tutorial on how to make them already prepared!  Here's a link to the "shingle road" tutorial.

On a non-gaming note, my son has recently completed his Eagle Scout service project and he's pulled together a blog that describes his experience.  As you may guess for earlier posts, he is a fanatic about robots and was able to combine his engineering passion with the scout service project.  His project involved organizing, fund raising and coach a Jr First Lego League Robotics team for disabled children through the Easter Seals 'Little Warrior" program which supports special needs children of deployed or disabled veterans.  It was a very challenging project for him to work with autistic children but the team did very well.  Here's his website:  http://jrlegoteam2946.blogspot.com  His site could use some traffic so please take a look.

OK enough proud pop stuff and back to road making!
Posted by jmilesr at 7:58 PM 3 comments: 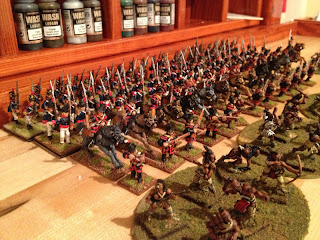 The final four units for my Fall-In War of 1812 game are done!  Outside of a few command stands and some terrain I think the game is good-to-go. 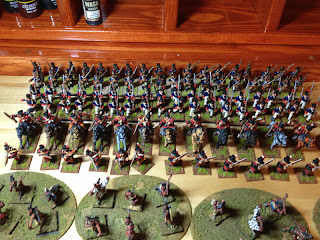 A few other shots of the final figures.  Those of you with any knowledge of the Battle of Lundy's Lane might be howling now as there were no Mounted KT rifles, Maryland Militia or Marines at the battle and you would be correct.  I'm making a few minor edits to the orders of battle to make things a bit more fun for the players. 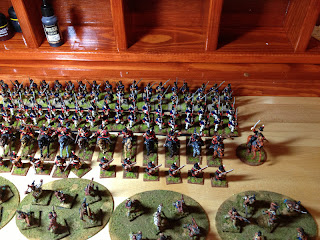 Another shot of the figures.  I really like the Indians and look forward to getting them on the table.  I should point out that the Kentucky rifles and Maryland militia were painted for me by Mike M who is a very talented painter and will be the overall commander for the British for our game at Fall In.  Mike also won vignette competition from the Perry painting contest sponsored by Architects of War at last July's Historicon. 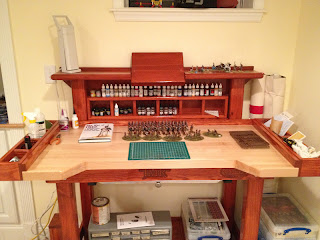 Lastly, after years of nomadic painting throughout the house, I finally broke down and bought a hobby workbench for a permanent "home".  Since it would be in the open it had to look nice and executive management (my wife) allowed me to order up one from American Workbench.  I need to get some better lighting but I'm very happy with the bench.  The book holder in the center is sized to hold an I-Pad so I can watch football on Sundays (using Direct TV's "Direct Ticket"), stream movies or listen to podcasts/music.

I'm still tinkering with organizing the workspace but look forward to many spending many hours there avoiding much more important duties.
Posted by jmilesr at 5:55 AM 11 comments: 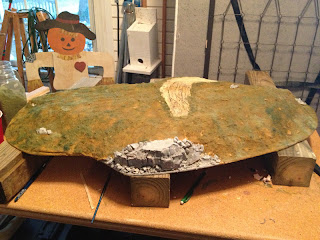 The hill, which will be a focal point for the Lundy's Lane game is finished.  It's roughly 3 feet by 2 feet and will hold two to three 40 figure battalions along with some artillery so it should be a tough nut to crack.  The first picture shows the side that will be facing the American army.  I have no idea if the hill at the actual battle site had a rock face but mine does! 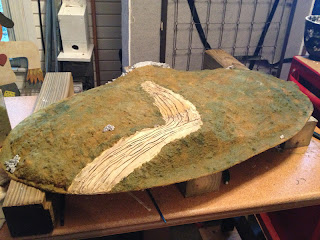 The second photo shows the side that face the British table edge.  I think I was a bit to heavy handy with the wheel ruts but nobodies perfect.

Next up are some split rail fences and road sections and then I think I'll be ready for the game. 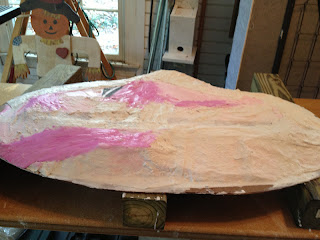 While my son was taking his SAT's I got a bit more work in on the sectional terrain project for Fall-In.  First up, the hill received a plaster coat in the form of paper towels soaked in hydrocal plaster.  The roads are pink spackle (don't worry it dries white. 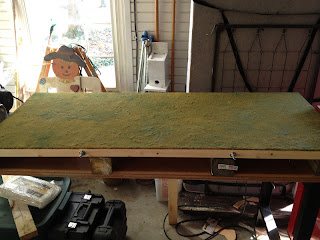 I also re-did all five terrain boards to cover up the issue I had with the matt medium showing through (please see the last post in this series).  I made sure to wet the board before applying the sealant. 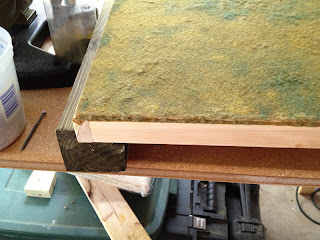 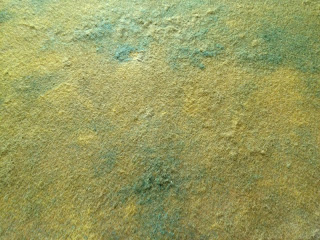 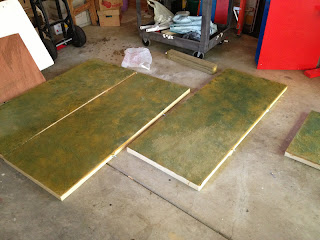 The other four board drying. 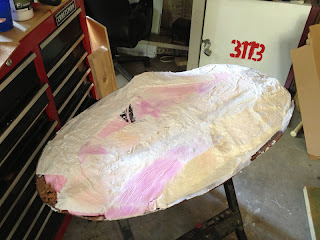 Another shot of the Hill drying in the sun - see the pink is starting to fade away...

Posted by jmilesr at 1:29 PM No comments: 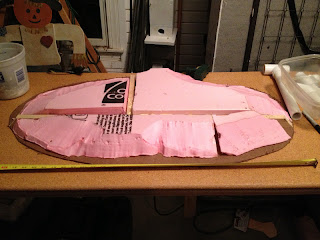 The main focal point of the battle of Lundy's Lane was a hill that traded hands several times during the battle.  I finished the basic structure of the hill last night.  It's a 3 foot x 2 foot piece of terrain that will sit on top my terrain boards. 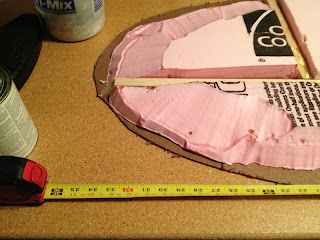 Here's a close up of one edge.  The hill will be relatively light but very sturdy.  I'm focusing on playability rather than geological accuracy so the Hill will feature a very flat "top".  Today's mission for the Hill will be to cover it in hydrocal soaked paper towels and add some of the rock faces. 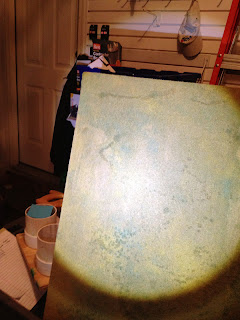 In all honesty, I screwed up some of the terrain boards in the previous post.  I didn't wet the boards before applying matt medium in spots.  The result is the medium doesn't spread evenly and you get what look like dribble marks.  These may fade over time but it's best to redo those spots the right way.

I surprise myself with my capacity to repeat silly errors like this with each project.  Oh well, it's a good thing I was only working on make-believe terrain!