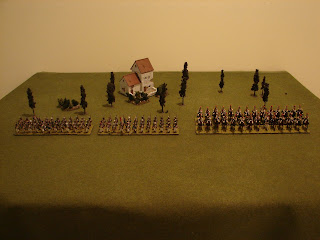 It has been a long road since I embarked upon my Napoleonic project (July'09) but I've finally got three completed units (including basing and flags).  On the far right of the picture is my 28 fig Carabinier unit, which took about a month to complete and comes from 2 boxes of the Perry Plastic French Heavy Cavalry.  This was the first time I've done a cavalry unit outside of 6mm and I was a bit nervous how it would come out.  Overall, I'm very pleased.  I used the light shade from Army Painter for dipping the block painted figures and it worked really well.  I should warn you that one should apply the dip in a very well ventilated area as the fumes are very strong and somewhat persistent during the drying process.  The shading worked well but I'll likely try the medium tone on my next unit to see what the contrast is.  Here is a close up shot of the unit: 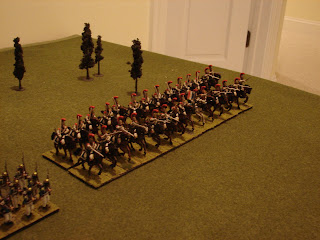 As I've posted before I am a big fan of the Perry plastics but I did run into a minor glitch with the cavalry.  The Perry's come with some pre-printed flags to use with the figures but I found the length of the flag pole (from the top to the holders hand was about 1/8 of an inch too short to use the provide flag.  Not really a big problem as I just downloaded a flag from the net and printed it to size.  By the way, the table I'm using to take pictures on isn't my gaming table as that is currently being used by my son's robotics team.  Were using an old ground cloth over a card table as a make shift photography studio today.

The 2 36 man infantry battalions are also Perry plastics, but in all honesty, were not painted by me.  I was introduced to a very gifted painter in the UK, Adrian McWalter, via John Stallard of Warlord Games  After a few emails back an forth, I commissioned Adrian to paint 2 battalions and they arrived on Christmas Eve.  As you can see, Adrian is a very talented artist and I'm very happy with both his work and service.  In fact, I liked the progress pictures so much that I commissioned another 2 battalions!  I did the basing, so if the shoes look a bit off, that's my fault.  Here are some close ups of the units - I now have something to aspire to with my painting: 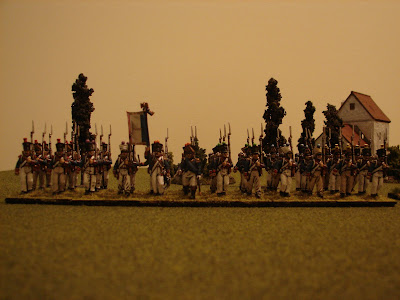 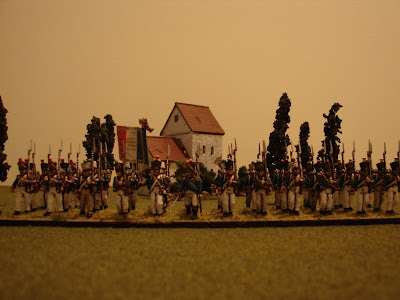 My club is having a large game on 1/23/10 and I hope to have a completed force of 5-6 infantry battalions, 2-3 cavalry units and a few artillery pieces completed and table-ready.  I've got 3 other infantry battalions painting and awaiting dipping and one other about 60% painted so there is a lot more to do

Merry Christmas from the Geek's Lair 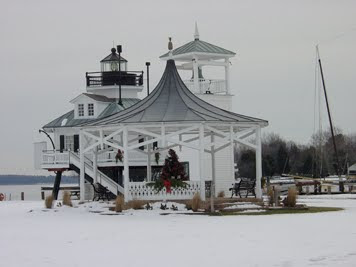 Merry Christmas everyone from St Michael's, MD.  I hope you and yours have a wonderful holiday season and that you get to spend time with your family and friends, as that's what the holidays are really all about.
Posted by jmilesr at 7:15 AM 2 comments: Links 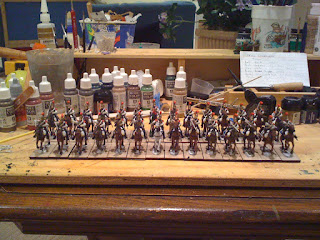 I managed to put the time windfall from being snowed in to get the 28 figure carabinier unit ready for the dip.  The basic painting is complete and all the extra parts (sword hilts and carbines) have been attached to the basic figures.

I'll let everything set up tonight and start dipping in the am.  I'm going to use the light tone from the Army Painter product set.  Army Painter may be a bit pricey but I know it works so I keep using it.

Still rushing to get my Frenchies completed by mid January.  I hope those of you in the mid-atlantic states are using this weekend's blizzard to good use by catching up on your wargaming projects!
Posted by jmilesr at 9:19 PM 3 comments: Links 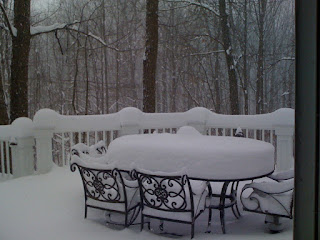 Wow - it's really snowing here in Maryland.  As you can see from the picture to the left we've got about 14 inches, as measured by the incredibly accurate horizontal depth gauge we have on our back deck.  The gauge also functions as a table in warmer months so it's a multi-tasker.

Outside of being fun (I've always enjoyed the change of pace inclement weather causes), the snow storm has created a nice pause in the normally hectic and somewhat commercial prep for Christmas.  Usually our family is running around getting ready for the holiday getting silly trinkets and such to prepare to spend time together.  Being snowed in has slowed things down and, I for one, am really enjoying it.  Of course there may be some additional rush freight charges from the online merchants but that's a small price to pay.

Rest assured that I am using my "Christmas Snow Day" to also catch up on my miniature painting.  I should finish up the basic painting on my carabiniers and begin to dip a few later this afternoon.  I also have another box of Perry French infantry to assemble and prime.  My petite version of La Grande Armee, continues to grow.
Posted by jmilesr at 2:27 PM No comments: Links 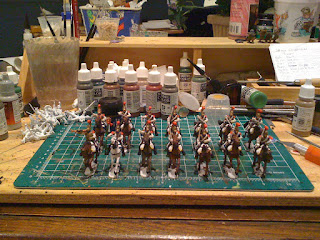 I finished another seven of the French Carabiniers today, bring my current tally to 14 completed and 14 still unpainted.  As I've posted earlier, I've become a big fan of the Perry plastics and the heavy cavalry box is no exception.  Progress has been slow this week as I've spent most of my free time helping my son's robotics team.

I'm hoping to get the remaining 14 carab's finished up in the next week or so.

I did win an e-bay auction for some cuirassiers (again the Perry Plastic Figs).  I'll let you know how this foray into the e-bay world of miniatures works out.
Posted by jmilesr at 9:36 PM No comments: Links