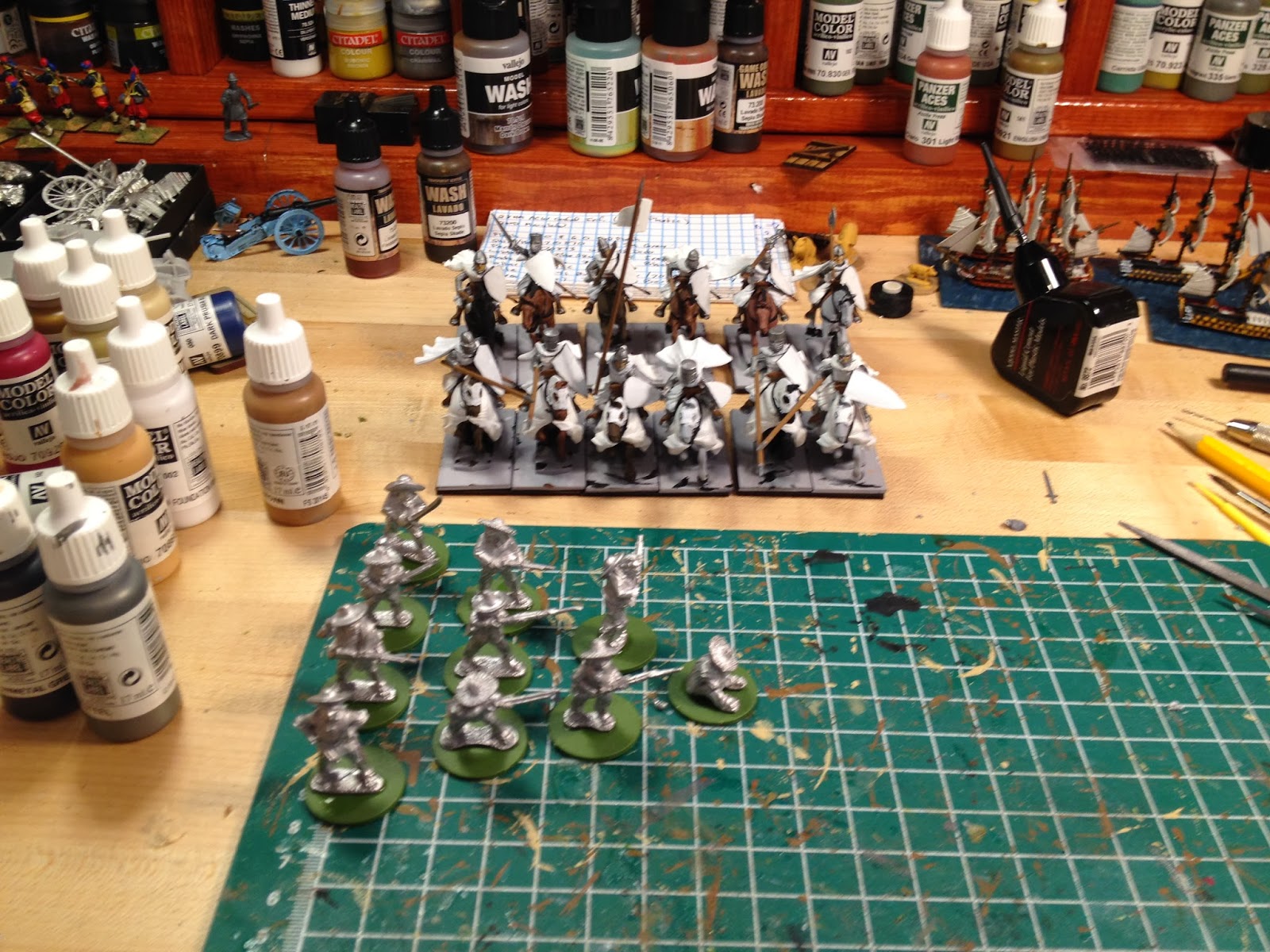 Just a short update on some projects for the Analogue Hobbies Challenge.  In the Upper center are 12 Templar Knights.  These are 28mm figures from the Fireforge Miniatures box set.  I must say they have been a lot of fun to both assemble and paint.  I'm waiting for some Templar transfer to show up in the mail to finish up this unit.

I'm thinking about my next historical period being the Crusades and these models seems like a good place to start.

Also pictures are some armed Mexican peasants. I got these models from Ernie's stash and I think their Foundry castings.  They have a lot of flavor and should be fun to paint up

As I may have mentioned before, one of the great things of the Analogue Hobbies Challenge is it really forces one to reduce the bulk of the lead pile, which is never a bad thing. 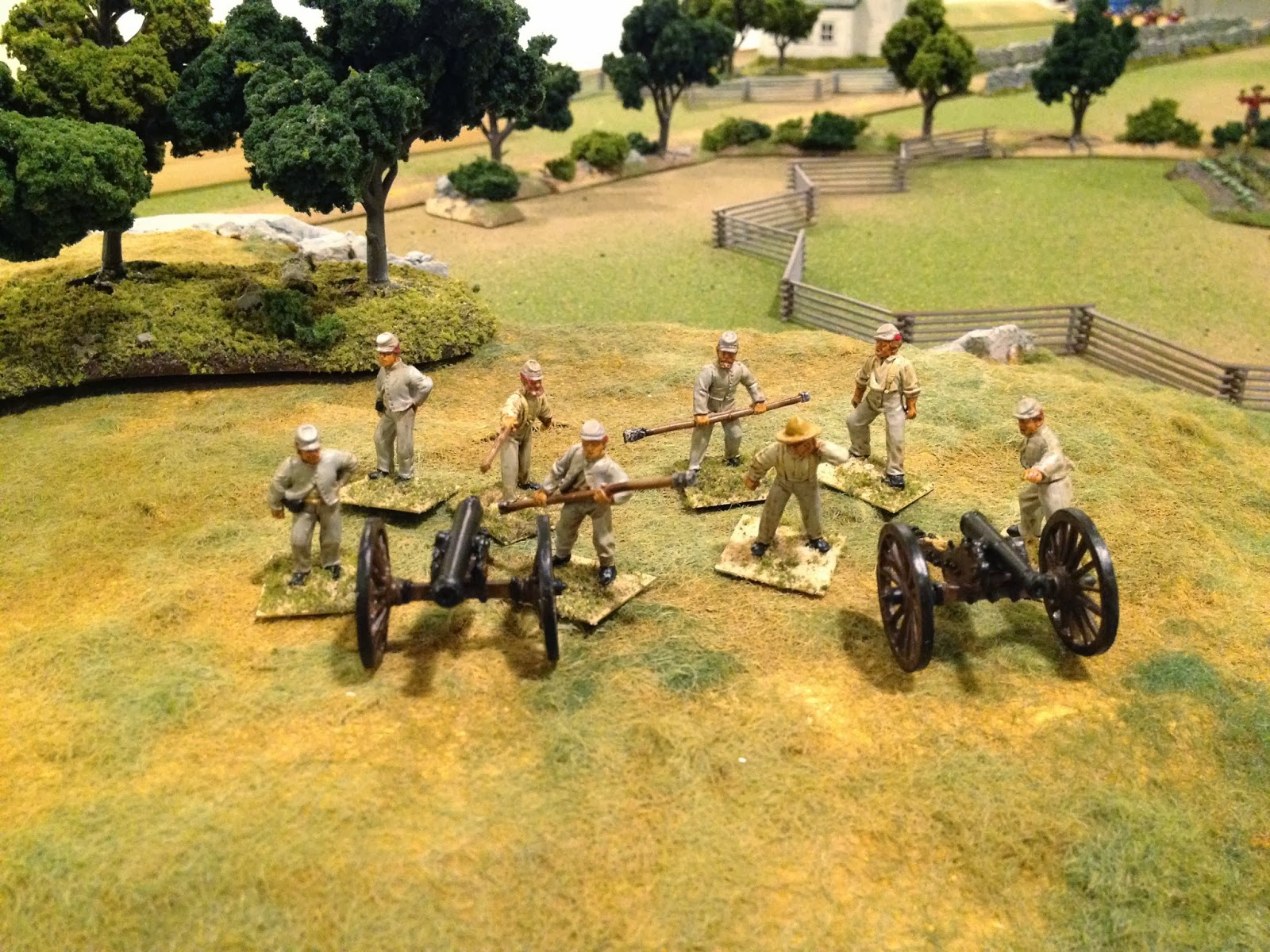 The latest submissions to the Challenge include 2 more Confederate guns & crews plus a Panzer III, all in 28mm.  The artillery pieces and crews are metal models from the Perry's. 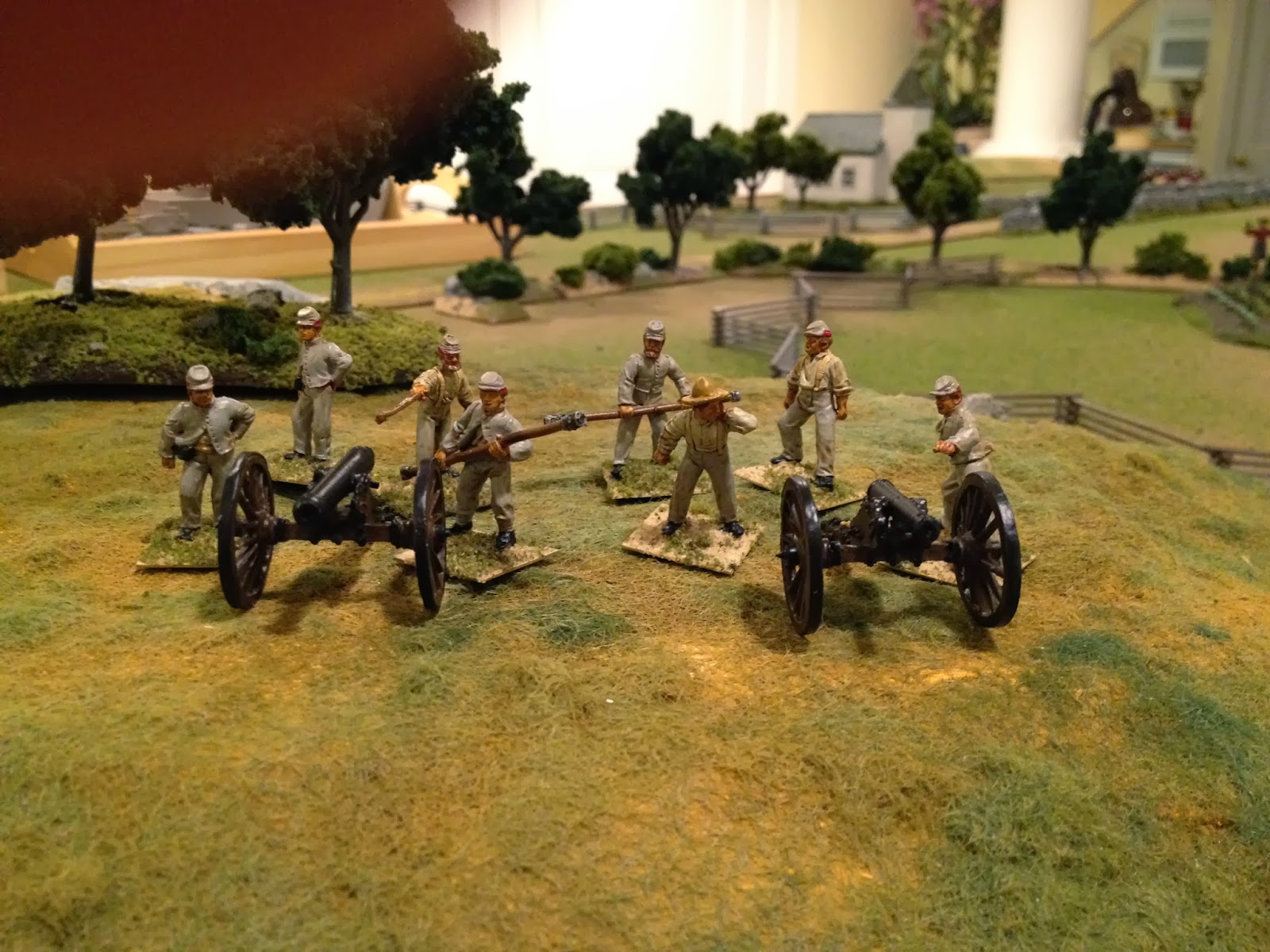 These figures were painted as "generic" rebels and aren't really from any specific unit - sometimes it's helpful to have some non-specific inits to fill out the ranks for a scenario. 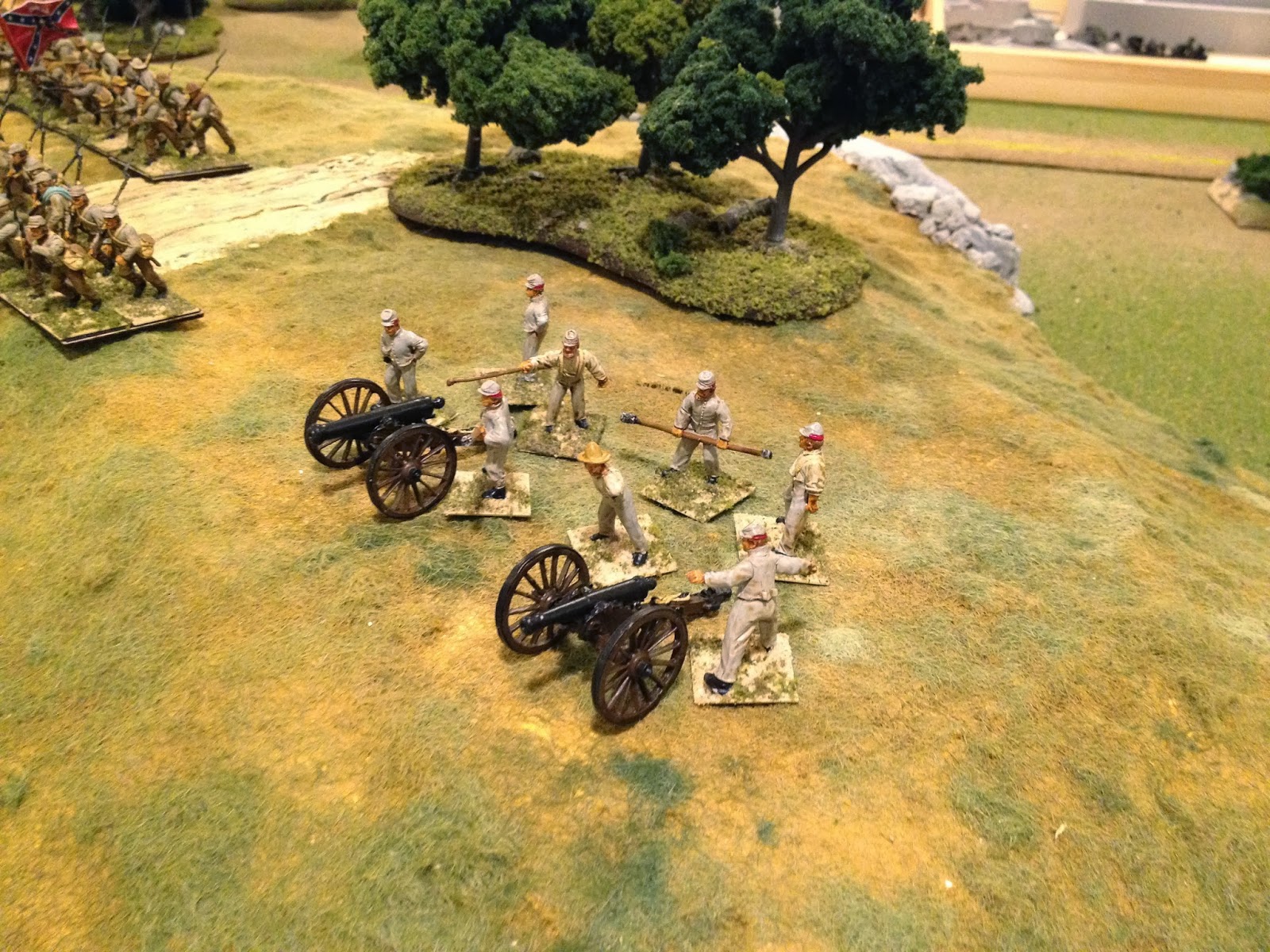 The inclusion of these 2 batteries bring my Confederate "artillery park" up to six guns.  The army as it stands today consists of 13 infantry regiments, 2 cavalry (mounted and dismounted) and 6 guns/crews. 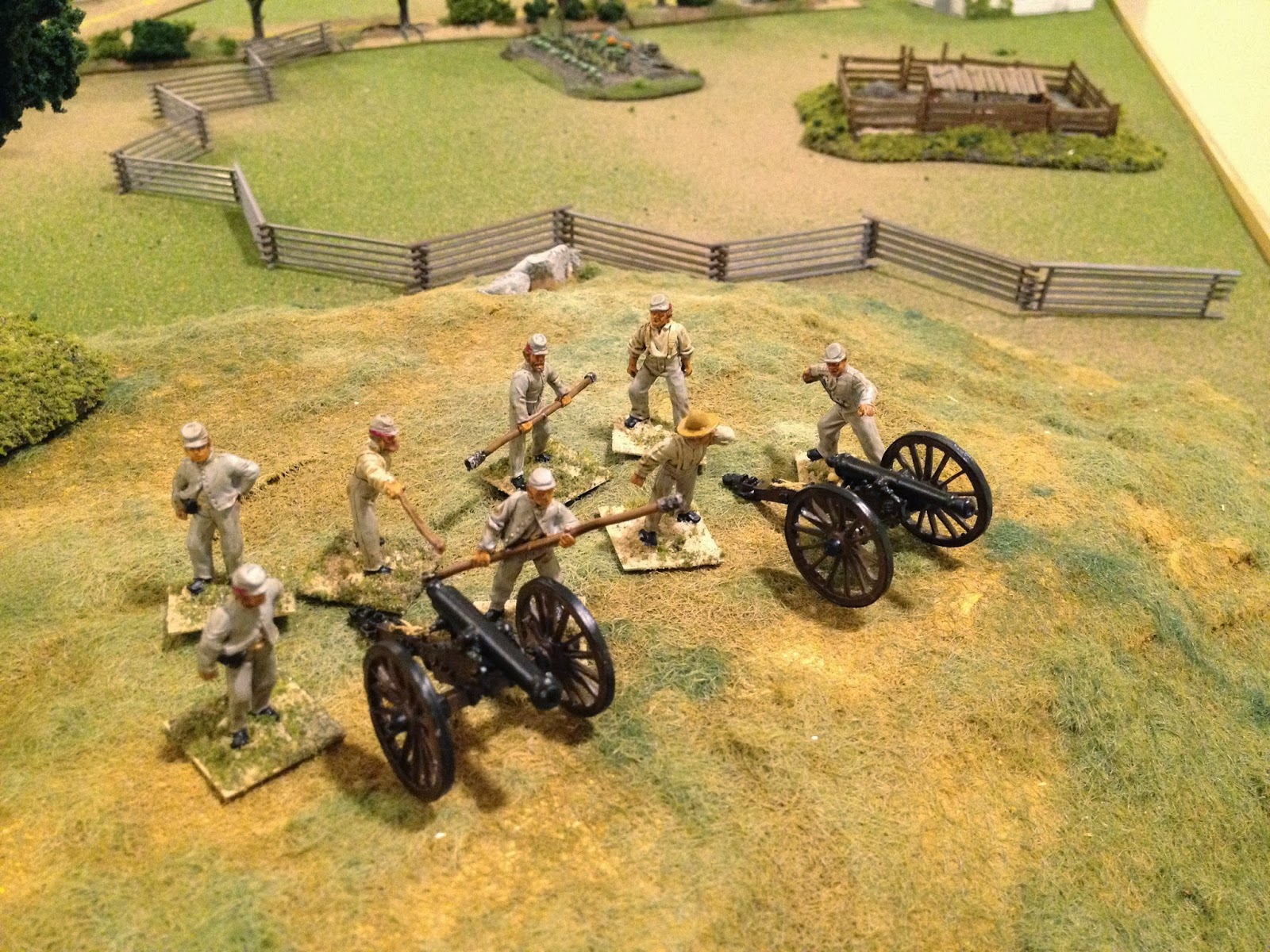 My stockpile of unpainted ACW artillery is now exhausted.  I will be waiting for the upcoming Perry plastic artillery box set to come out before enlarging the artillery park for either side. 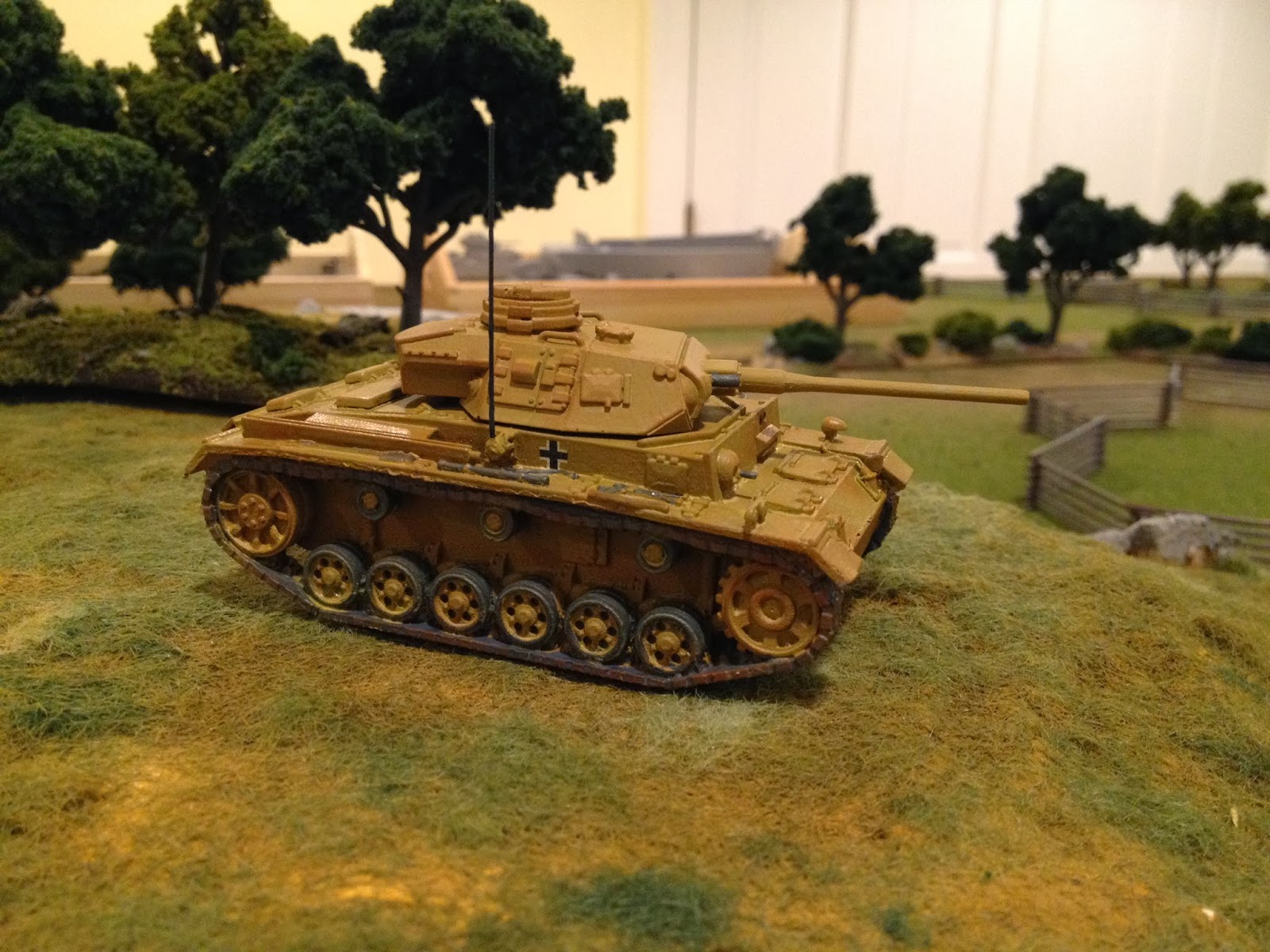 The next submission is a 28mm scale Panzer IIIJ from Blitzkrieg Models.  It's an all resin kit and the casting is superb.  I continue to be very impressed by the quality of the Blitzkrieg vehicles. 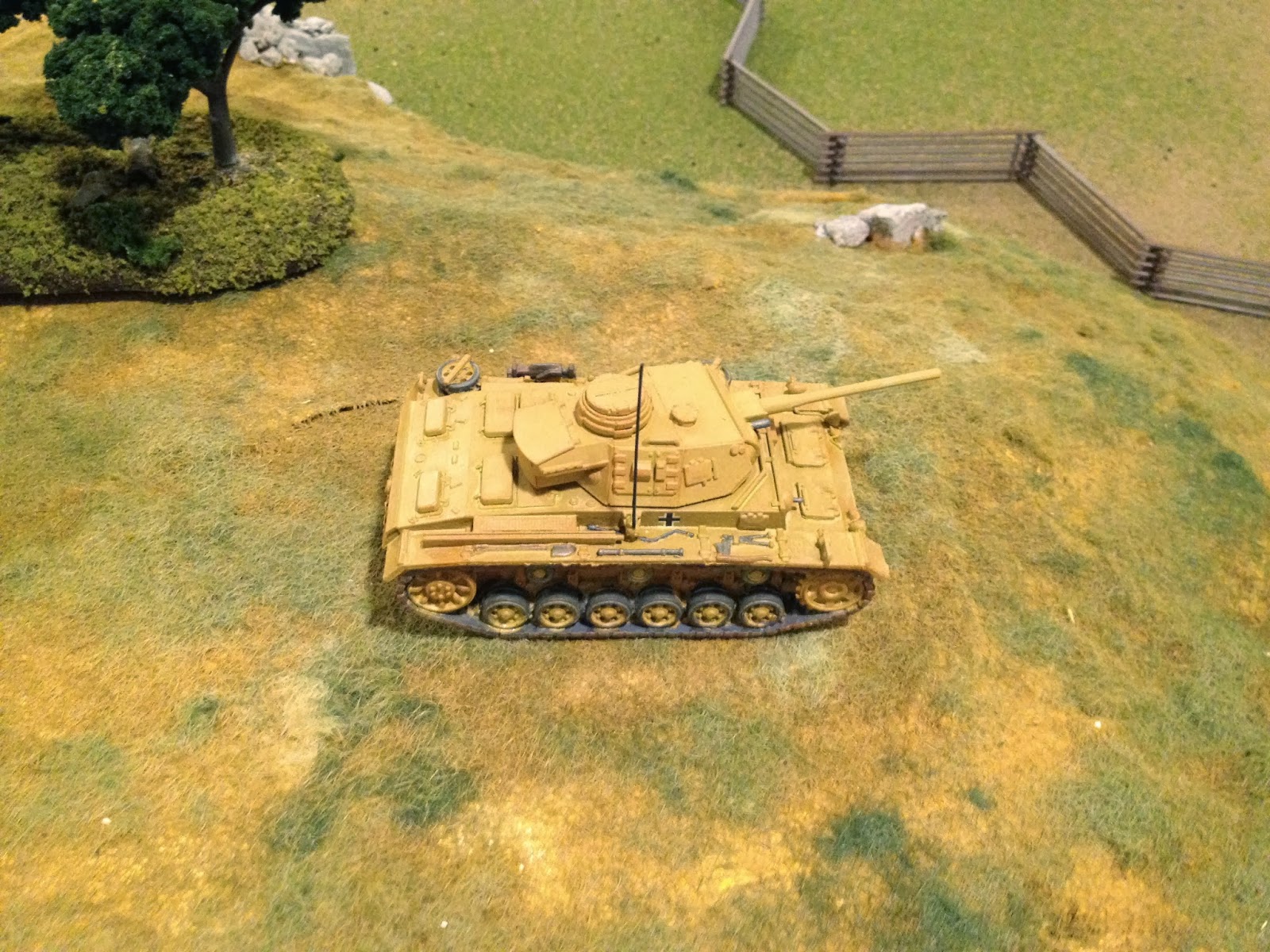 This model was painted for either the North Africa or Italian theaters of operation.  My 28mm scale WWII bits box is rather depleted so I didn't add any storage. 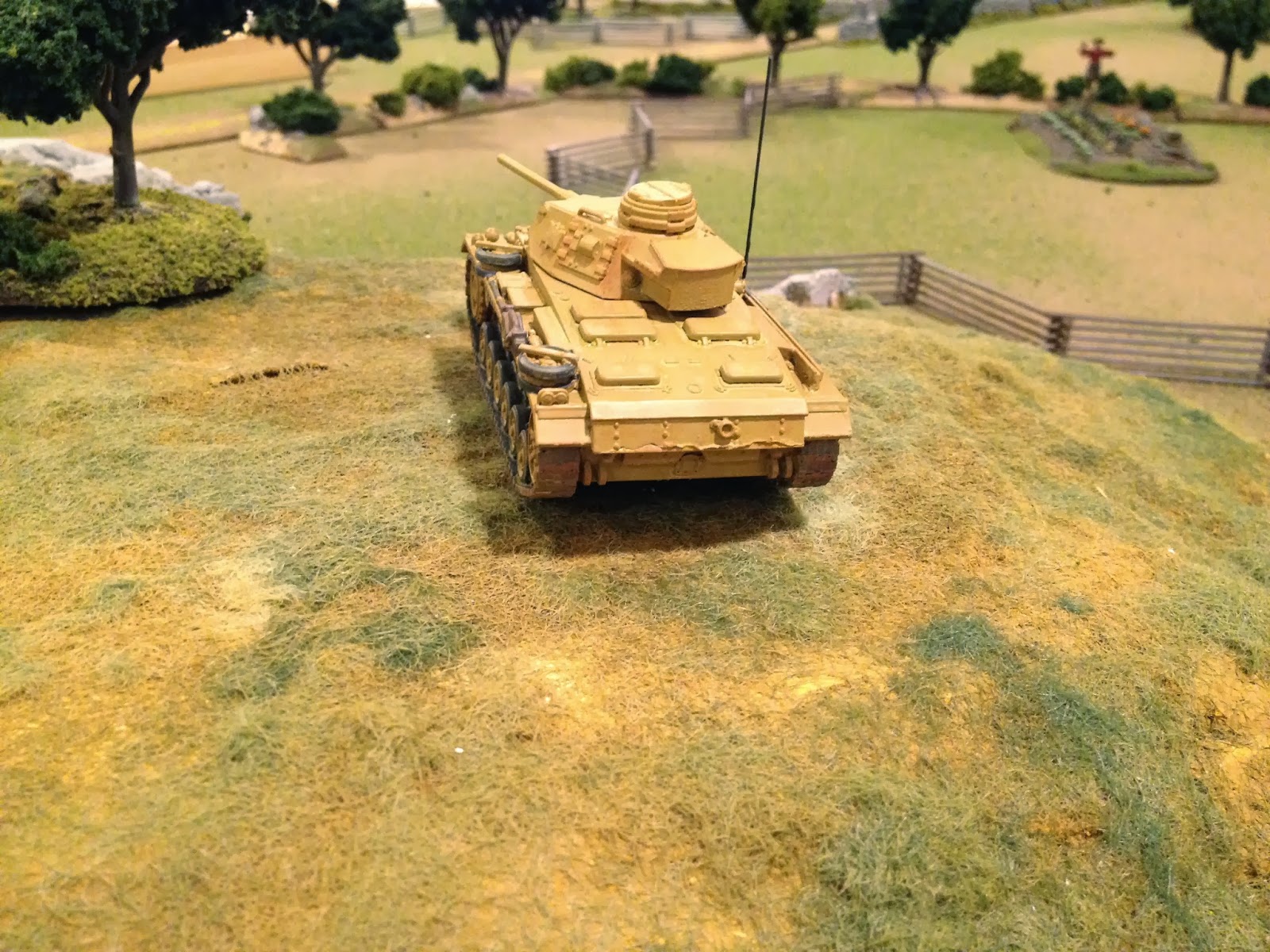 I did use the new Vallejo "sand wash" on the model and was very pleased with the results. 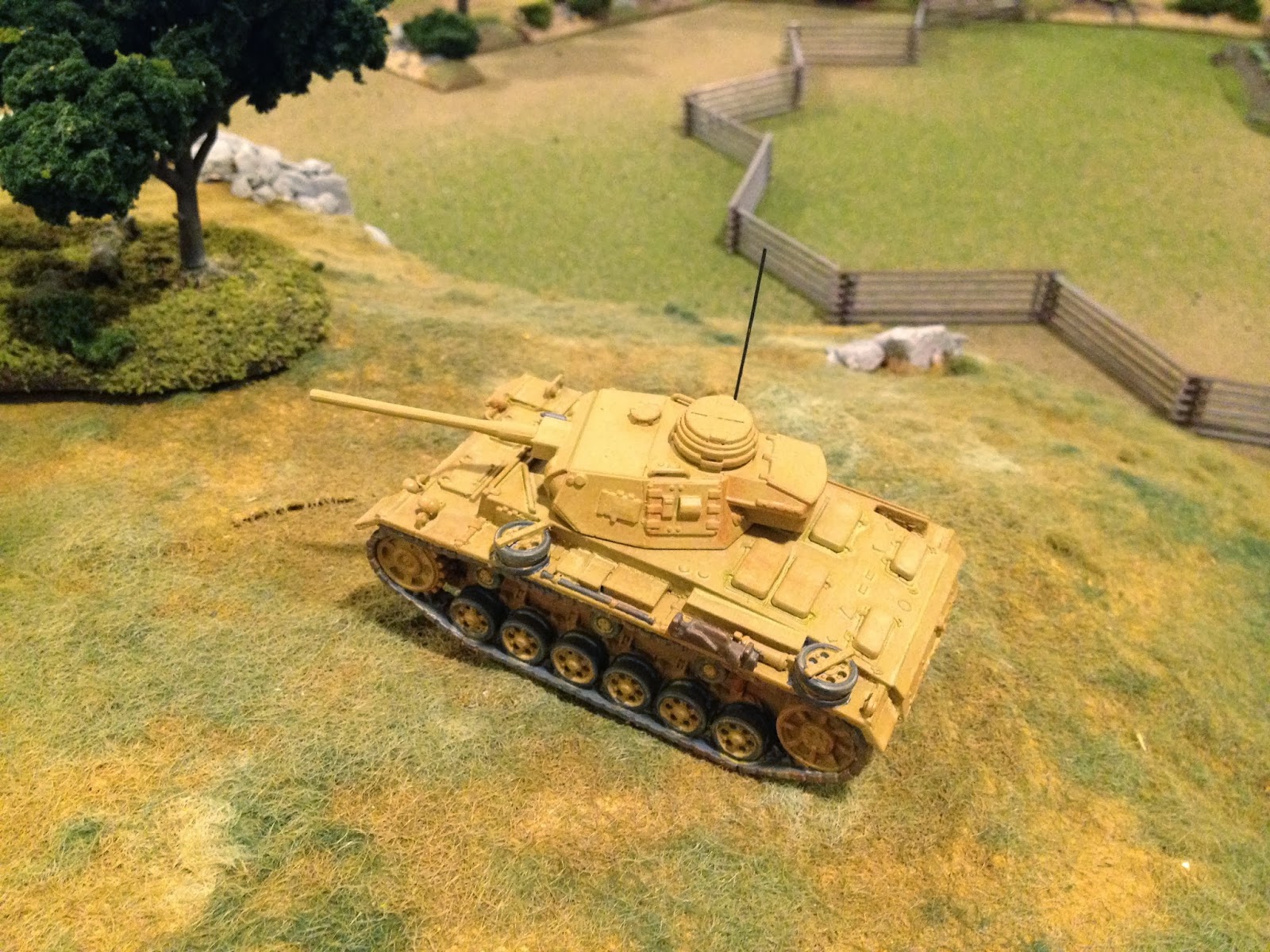 The antenna is just a length of thin brass rod. 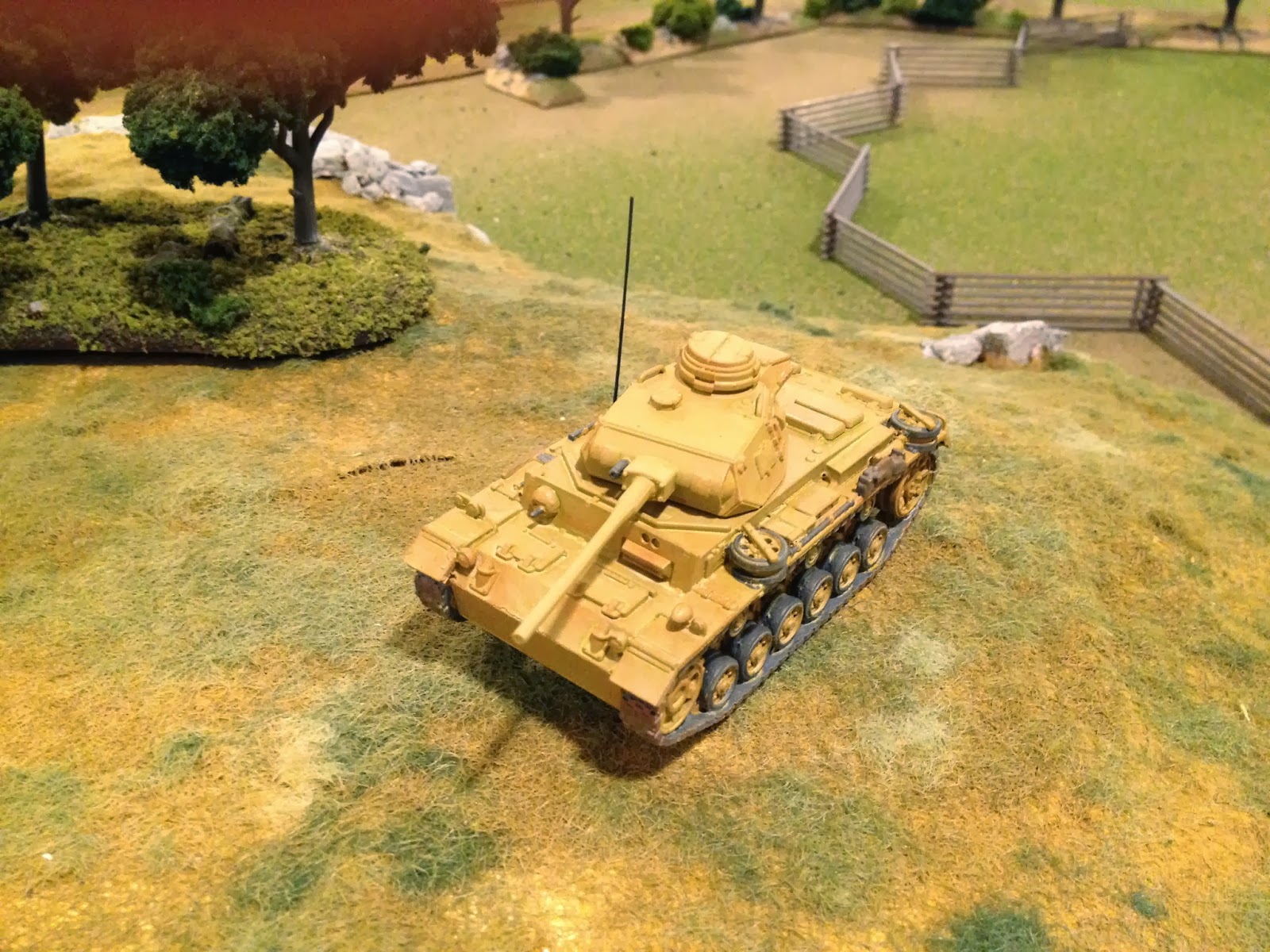 I need to get onto some DAK infantry figures to accompany this model.

I highly recommend Blitzkrieg Models for anyone looking to add some WWII vehicles to their armies in 28mm scale.
Posted by jmilesr at 6:38 AM 2 comments: Links 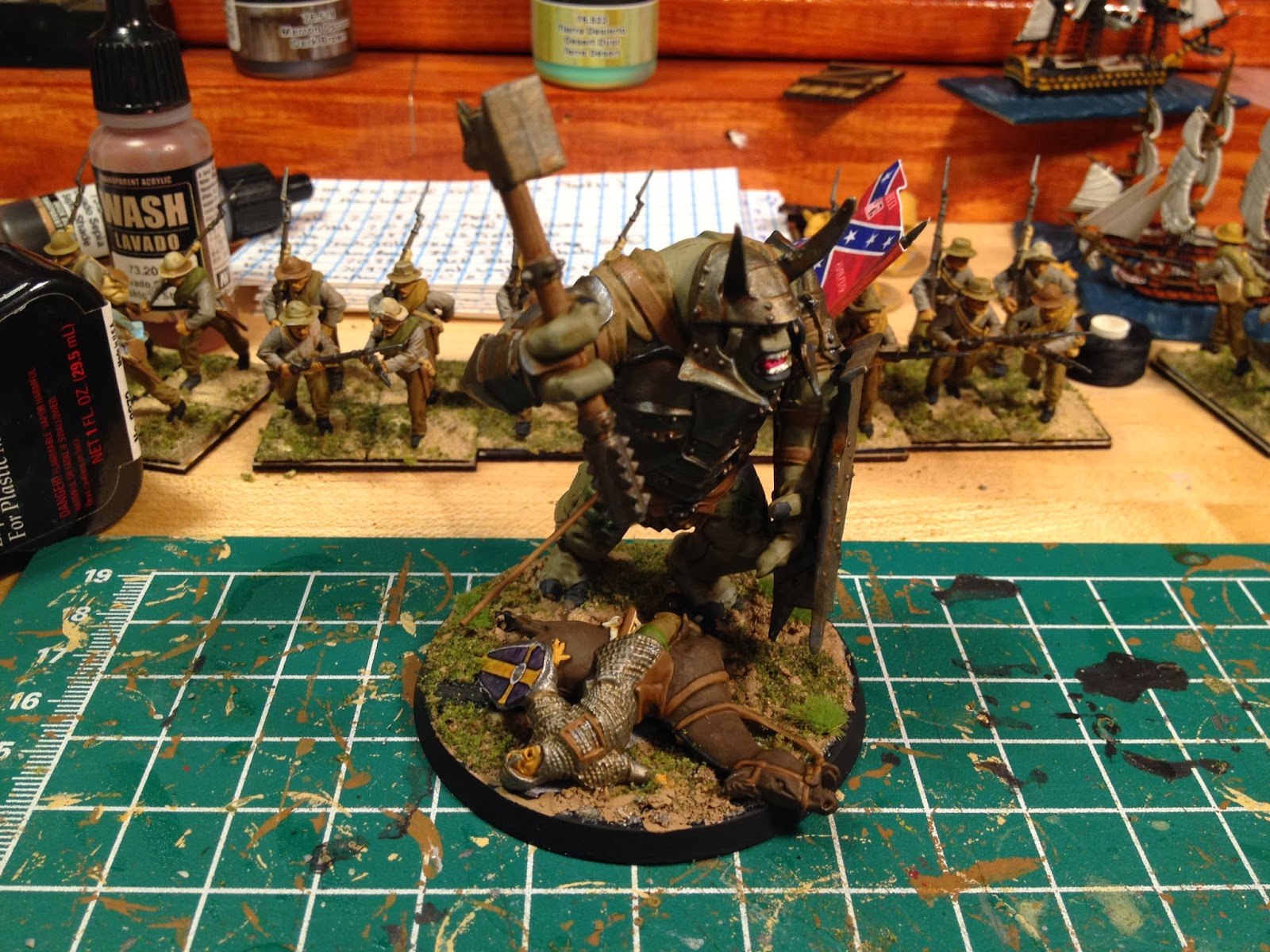 I've made 2 more Challenge submissions, which have brought my cumulative score to 625 points out of a target of 1,500 so I'm in track, for now.
The first submission is of a "Norse Troll" I'm planning to use in the SAGA game. 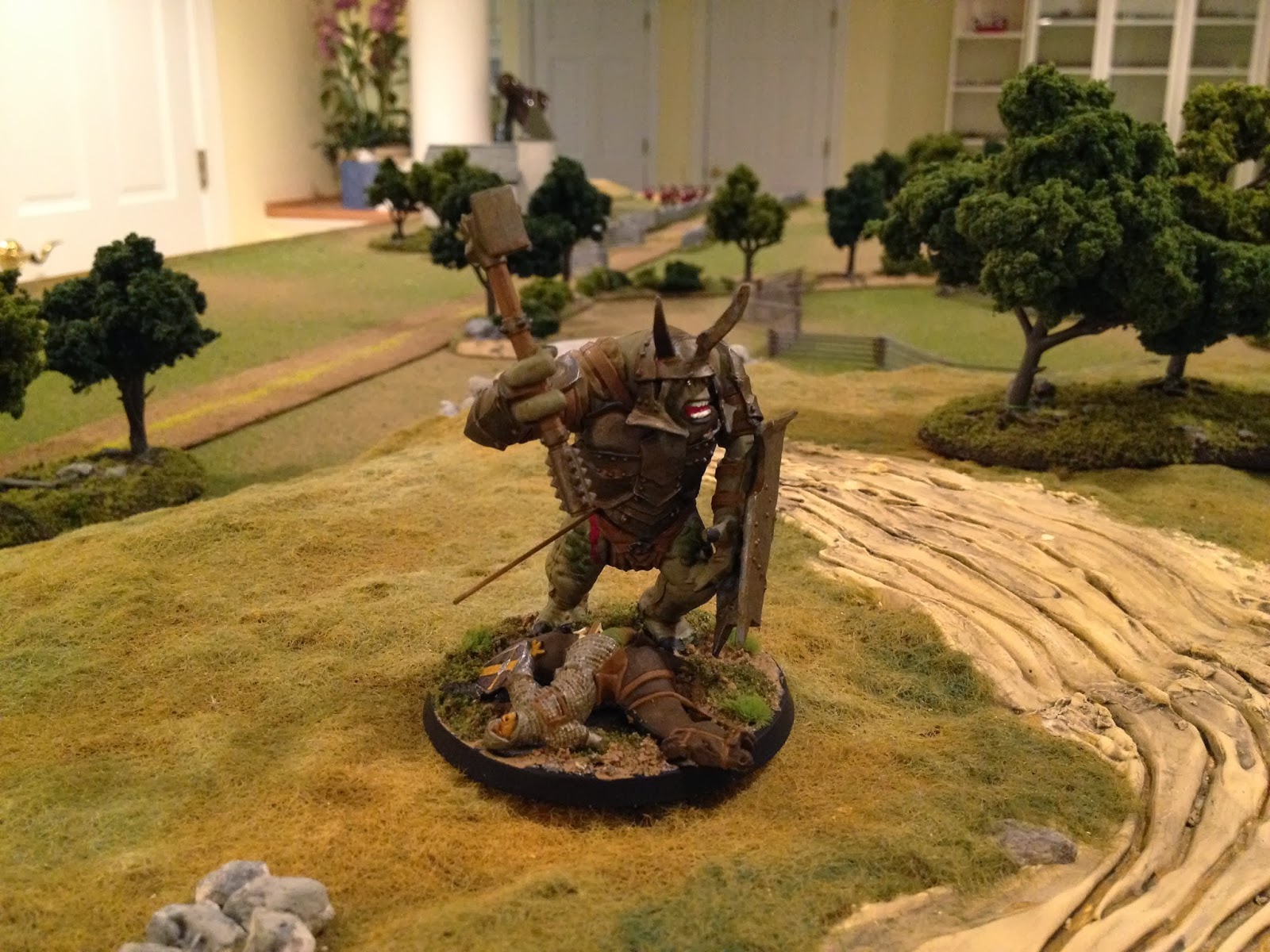 The model is from GW's Lord of the Ring line and, say what you will about some of GW policies, they do make nice models.  I also added one of the casualty figures form the Conquest Games Norman Knights box along with a Little Big Man shield transfer. 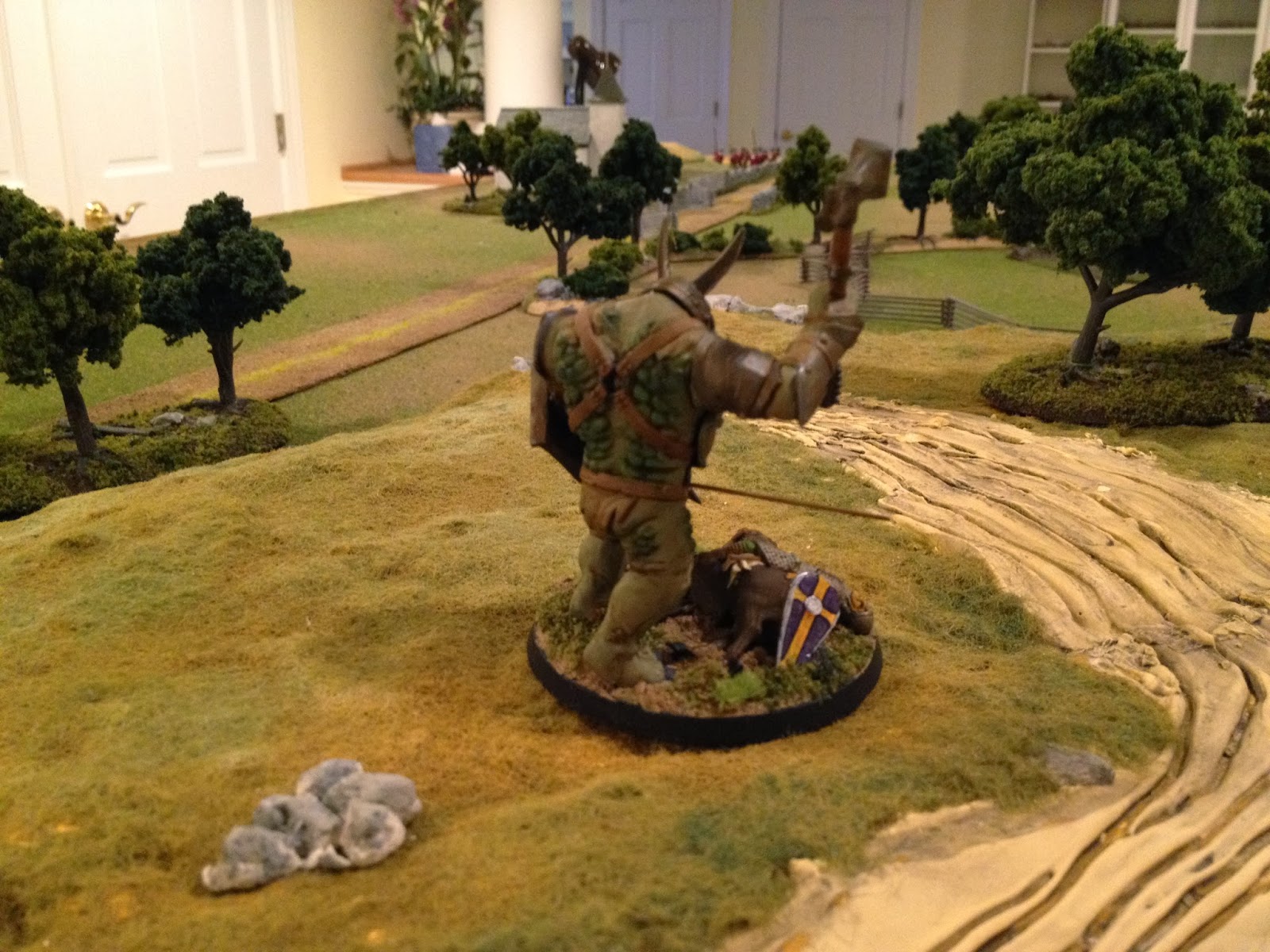 I've been working on a battle board that will make out friend here the equivalent of a 4 point army.  He'll get four order dice and the board will have the order options organized by Movement / Stomping, Arms (attack with hammer / defense with shield) and Head (roar / biting / thinking).  It will take some play testing but hopefully will be fun.  As the monster takes hits it will loose dice 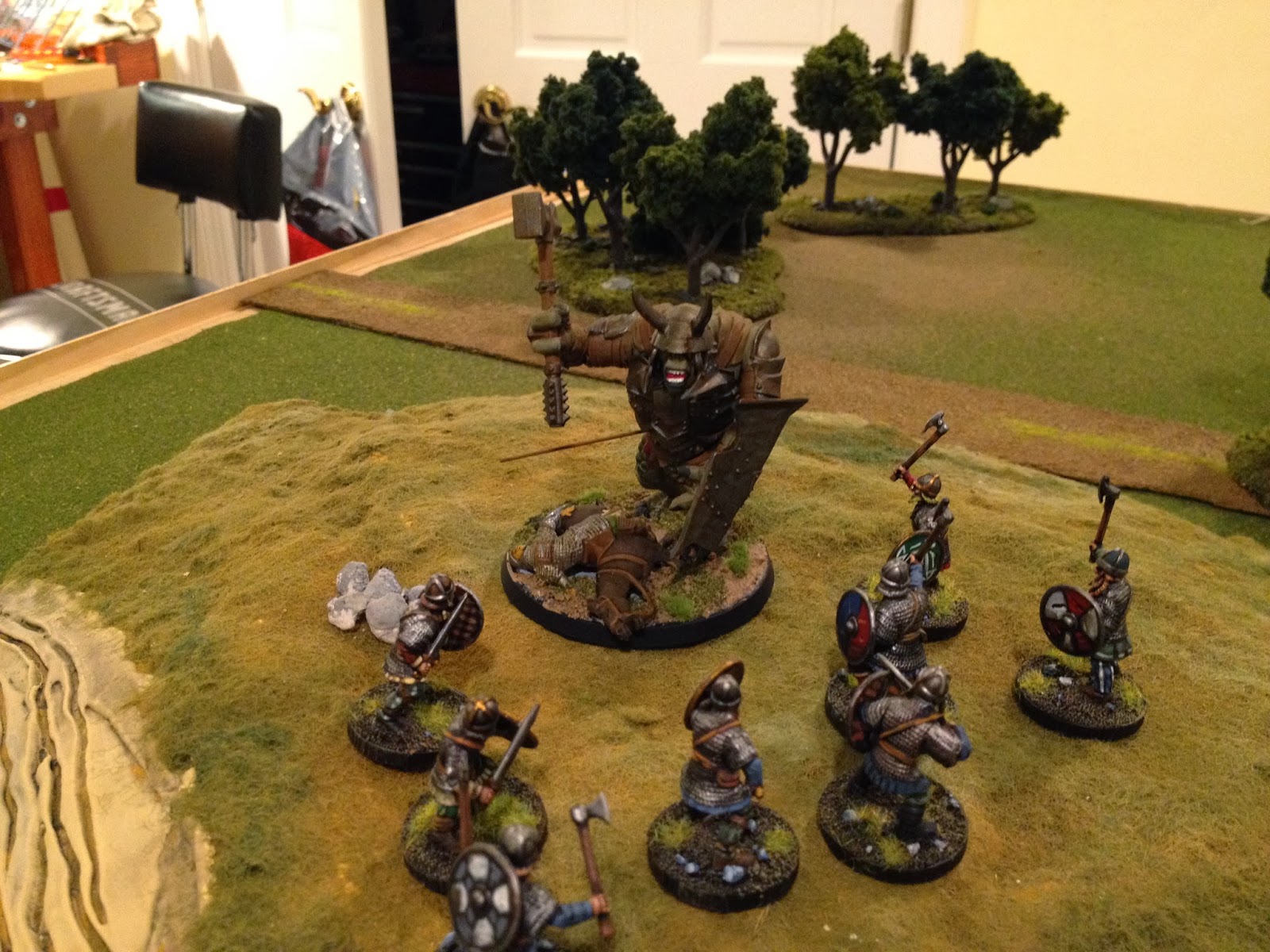 Here's a shot for scale purposes going up against some 28mm Vikings. 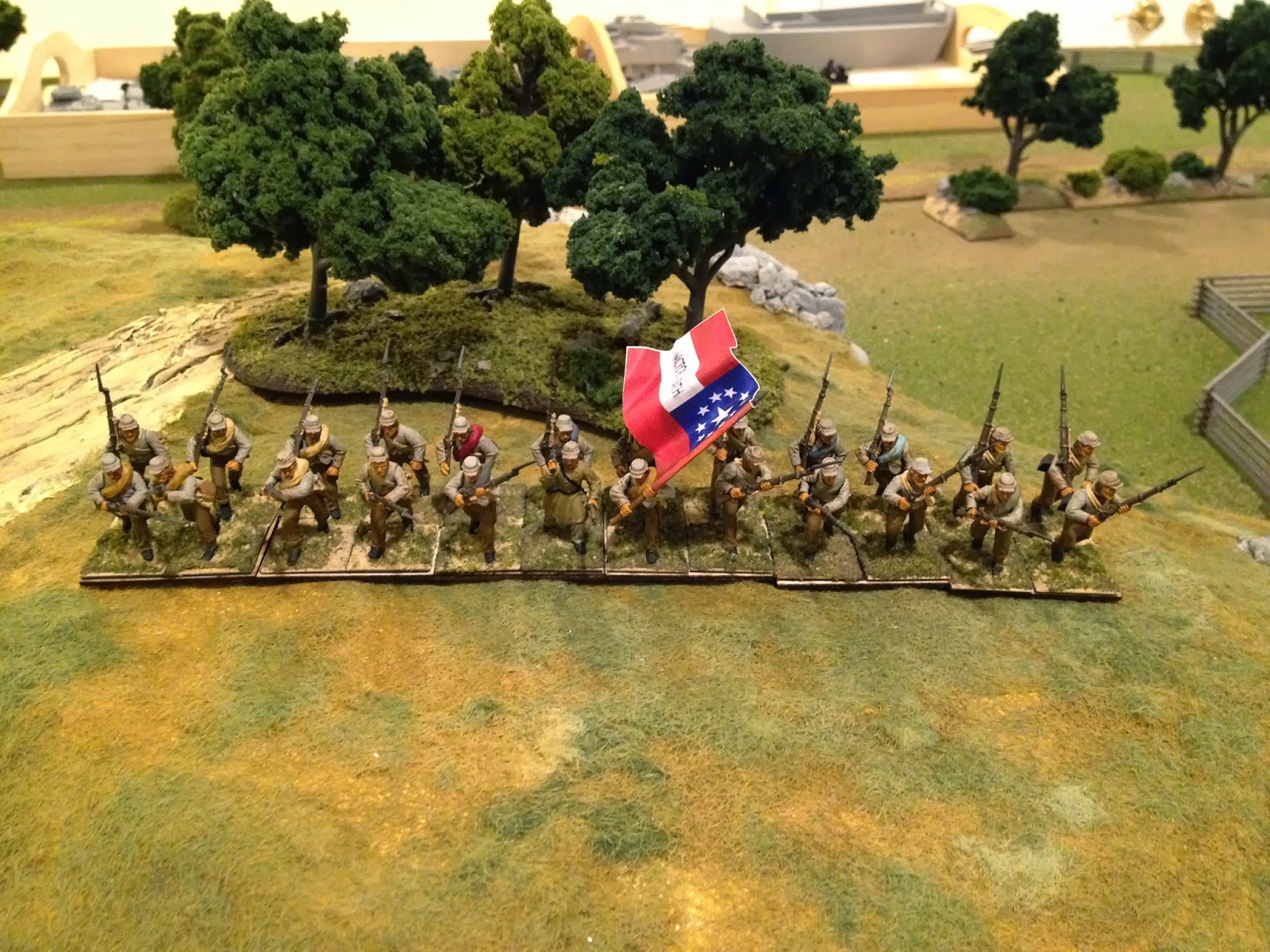 The next submission is yet another 24 figure Confederate Infantry regiment using the fantastic 28mm plastic Perry Confederates.  This unit is the 4th Texas, which now brings me to 3 out of r infantry regiments completed for Hood's Brigade. 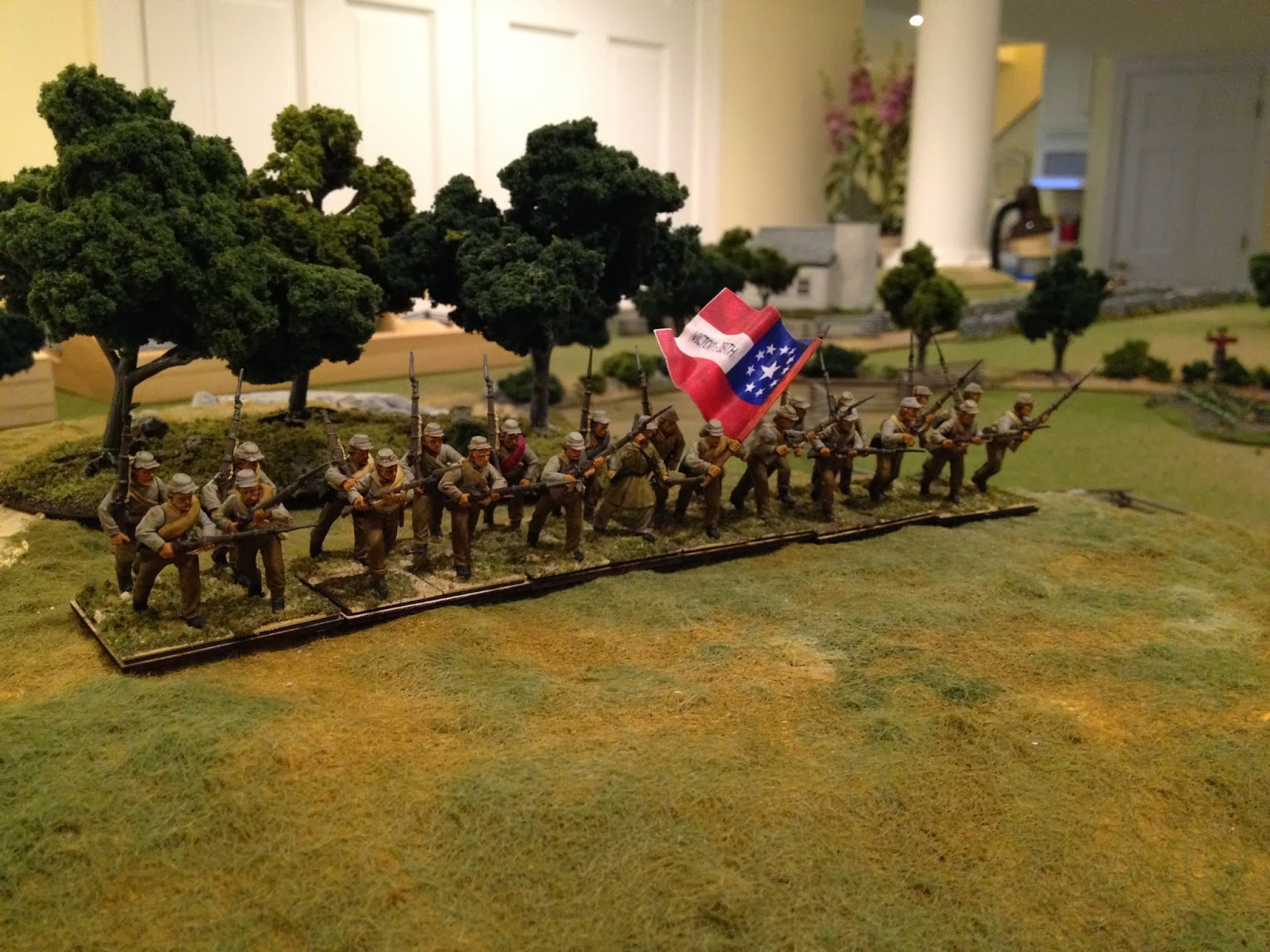 No doubt you've seen a lot of these Perry plastic confederates on this blog as this latest regiment brings the total number up to 12 completed regiments - thats 288 of the blighters that I've painted!  I still really enjoy painting these guys which is a testament to the quality of the Perry's models. 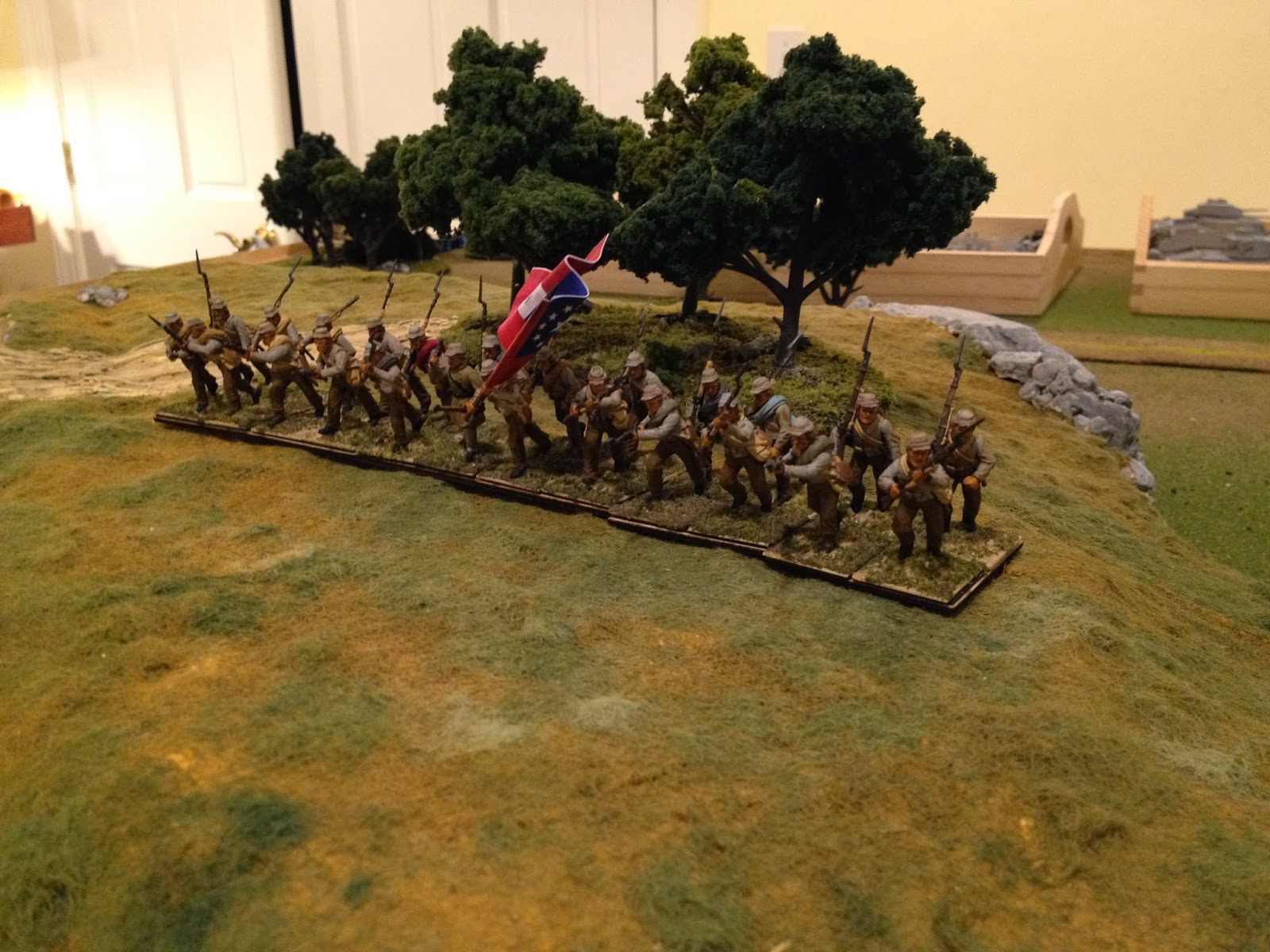 Next up will be the Arkansas regiment from Hood's Brigade and the the Georgians!\

After that perhaps a break from the ACW is in order!
Posted by jmilesr at 6:16 AM 8 comments: Links 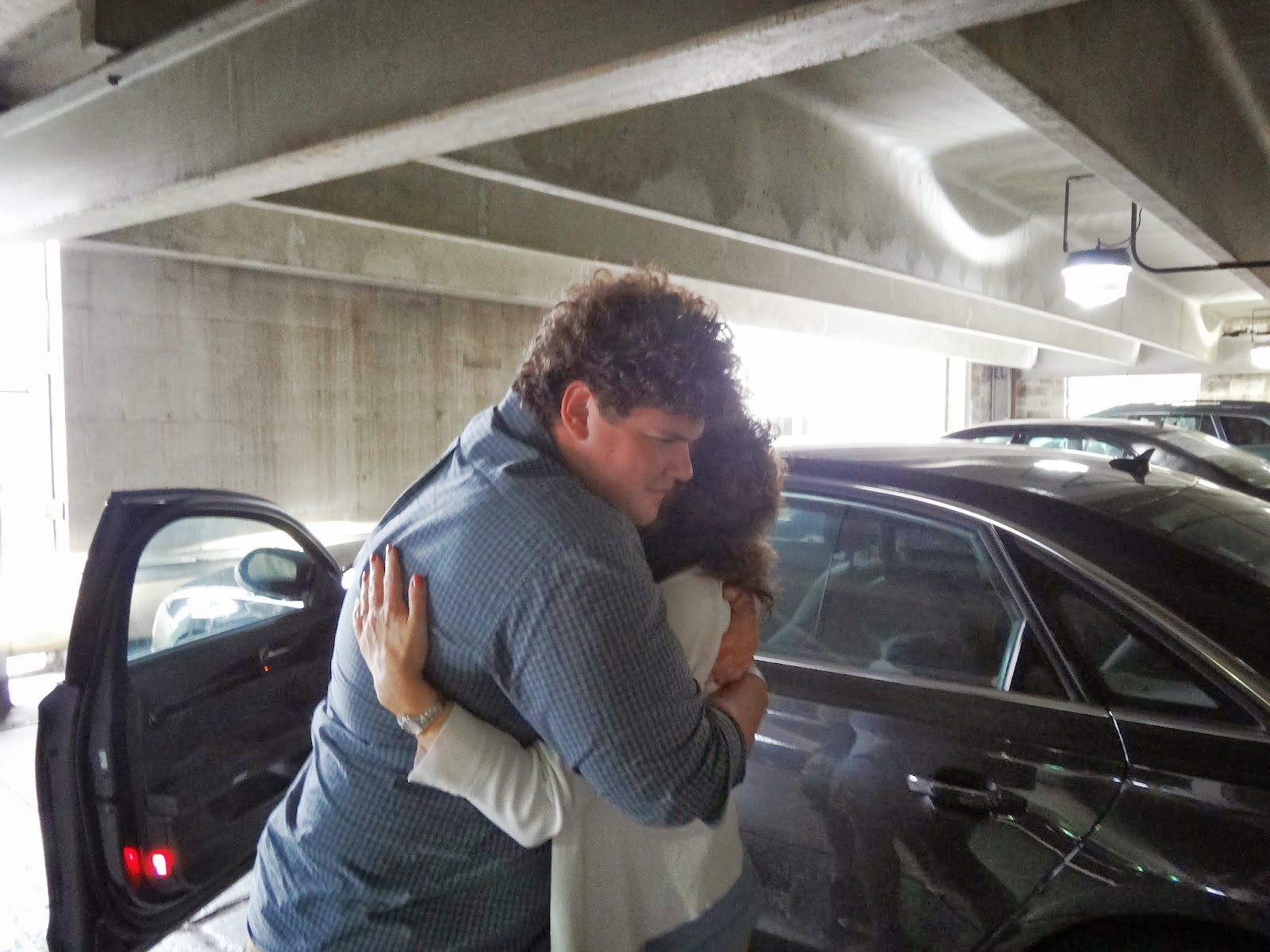 Time for the dreaded annual retrospection, where writers cast about to turn the trivial into the triumphant.  Doing these little diatribes is actually part of the user agreement with Google's blogger product - it's in section 2305(b), right after the clause where we sign away our privacy rights.

2013 was an extremely eventful for year for me, both personally and for my gaming hobby.  It was also damn busy, but there's a good side to being busy.

WARNING: Sentimental Proud Parent "Stuff" for the next few paragraphs.  Blood sugar levels may rise upon reading - you've been warned...

The biggest event from a family perspective was the transition of our son from a senior at River Hill High School to a college freshman at Carnegie-Mellon University (hence the intro picture of Sean and Mary Beth at the end of Move-In day).  This process saw Sean complete his competitive robotics "career" by leading two teams in different competitive categories at the FIRST Robotics World Championships and winning a very prestigious "Inspire Me" personal award there.  The first half of 2013 also saw Sean earn the rank of Eagle Scout, which is a very grueling process and a great way to cap-off his time in scouting.   Scouting may not be viewed as "fashionable" or "current" by some, but I'm both very grateful for and a big proponent of the benefits the Boy Scouts bring to helping a child transition into a young man.

What I'm most proud of Sean during the course of 2013 are not his success but how he handled adversity.  The admission process for Carnegie-Mellon University (CMU) is taxing and particularly so for Sean as he got in literally at the last second off the wait list.  Each time his application was deferred, he took it as a personal challenge to prove the that the admission committee made a mistake.  He never gave up and literally wore them down until he was admitted in late May.  CMU has the worlds best robotics program and Sean has wanted to go there since he was in 7th grade.  I spoke with a member of the admissions committee during "Move-In" weekend last August and she let me know that "your son's never say die attitude was why we realized he needed to be a student at CMU".  That was a very good day.

As far as the transition to being a college student, it's gone smoothly - his grades are good and he's very work focused.  More importantly, I don't think he could be happier and is in an environment that literally is a nature preserve for nerds.  He's bouncing between majoring in Theoretical Physics or Computer Science or Mechanical Engineering with a minor in robotics.  All are fields that are beyond my feeble skills to advise on so we'll see what decisions 2014 brings

Our other transition to being empty nesters has been better than I expected but we do miss the little guy (all 6'4" and 240lbs of him) but know he's where he wants to be.

In terms of my figure painting and gaming goals for 2013, surprisingly, I did pretty well - let's look at the replay tape....

(5) Place in the top ten of the Analogue Hobbies Painting Challenge         Done!
Ok, I just eked out 10th place but that still qualifies.  The "Challenge" has become one of my favorite hobby events (this year's version is going on now).  It's a great event and really shows how the internet boosts hobby interaction - well done Curt!

Overall not so bad.

(1) Attend all three HMGS cons in 2014 (Cold Wars, Historicon and Fall-In)
Ever con I've attended has been a lot of fun and they're only a two hour drive away in any direction

(2) Host a game at Historicon
It will be either another ACW game (perhaps with 2 ironclads this time) or a "All Quite on the Martian Front"  Heck, I might do both!

(3) Play in a FOW tournament

(4) Finish two armies for "All Quite on the Martian Front"  (Martians and a US force).
Some of you may have seen or even participated in the kickstarted for AQMF, I know I was a backer. I've also been a play tester for the game and can tell you it's a blast to play and the models are a lot of fun to paint - I think this will be a big hit in 2014.

(5) Finish the game room by the end of March!
Enough talking about the damn remodel, just get it done!

(7) Start ONLY ONE new Historical army
The hard part here is the whole "ONLY ONE" thing, hence the dramatic BOLD and underline fonts 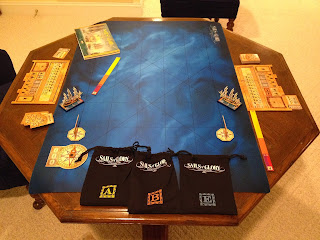 My son and I got our first game of 2014 in on Jan 1st!  We played an introductory scenario for "Sails of Glory".  Sails of Glory plays a little bit like "Wings of Glory" or even "X-Wing" in that movement is based on using cards that are revealed simultaneously.  The game does a surprisingly good job at giving the feel of maneuvering a sailing ship without a lot of complexity.  Wind attitude is handled very well as is very intuitive for experienced sailors such as my son and myself - that's a big plus!

As you can see in the picture above, each ship has a status card for tracking damage and other aspects of the ship - guns loaded or unloaded, crew status, sail settings it all works very well.

Damage is based on range and then drawing chits out of the bags - "A" for long range (the yellow part of the stick) and "B" for short range.  The "B" chits tend to produce more damage than the "A" ones. 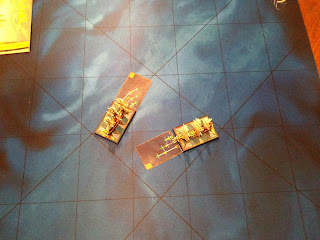 Here's a shot of our two ships maneuvering for the first shot.  As stated above, players pick a maneuver card and then reveal them.  Place the card in front of your ship and move accordingly. While it's hard to see from the picture the ship bases are very well laid out and have marking to show the gun angles and wind attitude.  Wind attitude is color based with green representing breaching (that's the fastest), Orange (Beating or Running) or Red for taken aback (the bow is facing into the wind).

Our game featured two 74 gun ships of the line in a duel.  I commanded the HMS Defense while Sean skippered the French Ship Genereux.  Our game took about 30 minutes and went down the wire with the Defense just eeking out a victory over the Genereux!  I think I only had two damage points left!

All in all it was a very fun game and really captured the feel of a sailing encounter (in my opinion).  We're going to play again tonight and I'll report back.  One other plus is that while the scale of the pre-painted models is 1/1000, the bases can easily accommodate my 1/1200 Langtons!

I purchased my copy of Sails of Glory via Kickstarter. 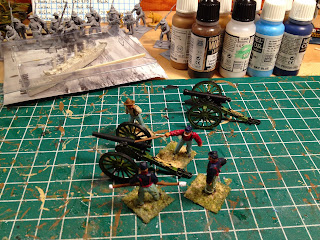 Well we're 17 days into the Analogue Hobbies Challenge, which has become one of my favorite hobby events of the year.  I'm currently at 429 of a 1,500 point target so I feel pretty good about my progress so far.  My first submission was a Union artillery crew with a bot of a holiday theme. 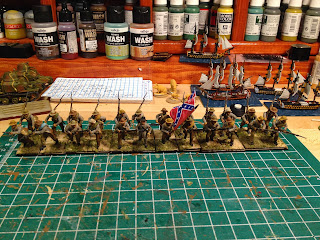 The second submission is a 24 figure Confederate Infantry regiment.  This is the second of 5 regiments that made up Hood's Brigade.  I completed the 1st Texas during last years competition and hope to finish out the brigade during this year's event. 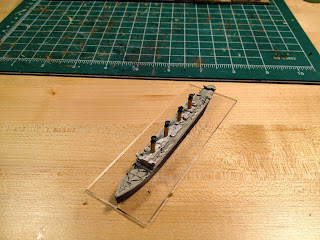 A 1/2400 model of the Titanic.  This was my contribution for the 1st fortnight challenge - a "civilian" theme. 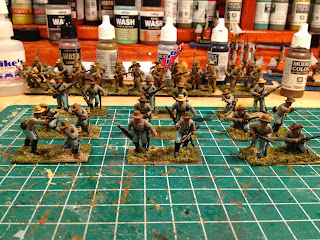 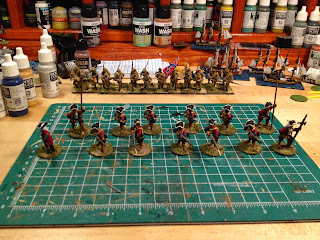 My contribution to the Bloggers for Charity event - the 60th American Foot regiment.  I need to clean these up a bit. 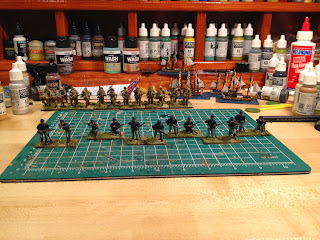