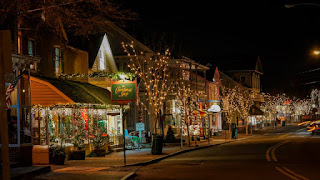 Merry Christmas from the Lair of the Uber Geek to you and yours this holiday season.  I can't believe that Christmas is just a few days away but there you have it.  I've got a frantic few days to finish preparations - somehow it always seems to get done.

The picture is of the main street in St Michaels.  Christmas is a surprisingly big tourist event for the town and its really fun to experience.  Post Jan 1st we all pretty much go into hibernation mode until the Spring.  The winter is one of my favorite times to be on the Eastern Shore.  Its very quite and affords a lot of painting time.  What's not to love?

Have a wonderful holiday, everyone.
Posted by Miles at 8:30 AM 8 comments: Links 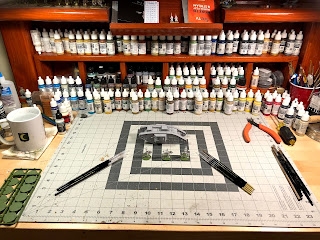 My painting bench has been cleaned and organized (well sort of, but good enough for me).  As with past Challenges, I start with brand new brushes but there's a difference this year.  On the left are my tired and true but really expensive Winsor and Newton Series 7's in sizes 3, 2 and 1.  To date these have been the best pigment application weapons I've ever used.

But this year's there is another option - a much less expensive set of Kolinsky hair brushes which I'm going to give a try.  We'll see if Stalin's Quantity has a quality all its own assertion applies to tiny paint brushes.

Also you can see a hint of what lies ahead for me during this year's challenge - Some 15mm (Ok 18mm) Russian Generals from AB Miniatures and a WW1 British tank that was primed and ready to go since January of 2015 (Challenge V).  I suspect that makes it qualify for a certain waypoint on a path....

You will see a lot of 18mm Napoleonics, 28mm WW1 and a few surprises during Challenge X.

I will be off to a slow start given some water damage (see this post) but all is well.

Best of luck to all the Challenganista's!
Posted by Miles at 7:33 AM 5 comments: Links

Normally, the handful of days leading up to the Challenge kick-off are filled with frantic miniature prepping - filing mold lines, attaching to bases and priming.  This year's a bit different.  Don't get me wrong - there's a great deal of frantic activity but it's more focused on repairing the broken water line in my hobby area rather than the more important hobby related items.

A copper joint failed and my hobby area was subjected to a bit of water damage.  Luckily it was more of a pinprick leak / spray rather than full on broken pipe and the resulting gushing torrent.  Thankfully no miniatures were lost in the flood but a lot of my sectional terrain pieces got ruined and a good deal of terrain supplies (matte board, foam core etc) was damaged  Note to self - water soluble glue is really easy to work with but does have a bit of a flaw when a pipe leaks.....

I think the wet ground foam has dealt a mortal wound to my trusty shop-vac.

The carpet in the basement got wet and will need to be dried and then cleaned.  All of this means I'll be off to a bit of a slow start to this year's challenge.  I'm off to rent a carpet cleaner tomorrow.  Exciting times! 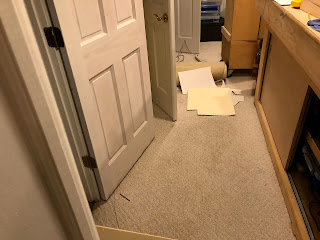 You can see the water creeping along the carpet.  Since the carpet is over 15 years old, I suspect my wife may attempt to justify a "its time for new carpet" argument. She's likely right but I fight a delaying action to get through the Challenge.  Some things  need to have priority in life.

In some ways we were very lucky - the spot where the leak occurred was the area where we used to hide our sons Christmas presents in the days that Santa Claus "existed".  Now that would have been a disaster
Posted by Miles at 8:07 PM 8 comments: Links 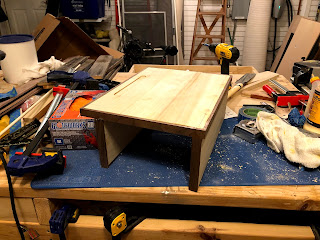 The base assembly of my wife's armchair desk is complete.  The arms on her favorite chair are really big (9 inch diameter) which is why there is such a large gap.  The overall work surface if 12.5 x 16.5 inches.  The unit is made out of popular wood and I trimmed it with 1/4 inch walnut for some contrast.  There's also a pencil groove routed into the top. 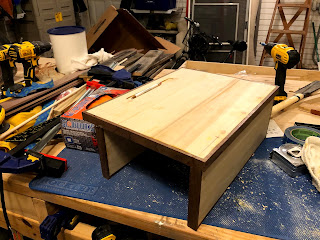 Here's a "action-shot" of the pencil holder in use - very exciting, isn't it?  The desk looks pretty rough now as there's a good bit of glue squeeze out to clean up and then sanding, a lot of sanding.  There's always sanding to do in woodworking. 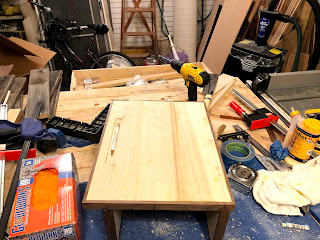 The legs are attached with glue and wooden pegs so the joinery is very strong.  I suspect MB can bash me over the head with this thing and it will not break.  Let's hope I don't give her a reason to test that theory empirically.  I used a very dense wood so it weighs close to 10 pounds.

Once I finished here it's on to my son's present which will be a tabletop valet box with a builtin wireless charger.

The club's Youtube channel just posted our Star Wars episode "Battle of Endor".  It was a lot of fun to play in and the guys went a little over the top in their "acting" but I think the video came out well.  The minis used in the game came from Greg and my collections.  Please go check it out. 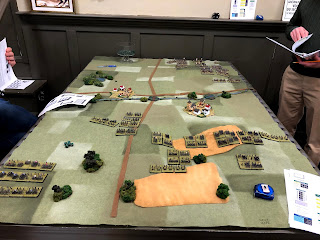 Last night at the club we were play testing a new Napoleonic ruleset using Greg and Tom's wonderfully painted 6mm armies.  It was a meeting engagement between a French army (Greg and me) vs Tom's Russian hordes. 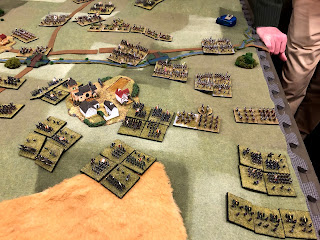 The base unit is a battalion (with 4 bases).  Since we haven't given any feedback to the author I'll not disclose the ruleset.

Overall, I really liked the rules - especially the command control aspects.  There are some things that seemed a bit wonky but that's why one playtests, isn't it?

Any night you can get some Nappy's on the table is time well spent.

Posted by Miles at 7:00 AM No comments: Links

It's Christmas Present Time in the Workshop 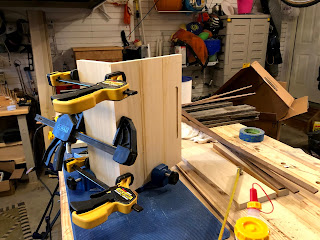 It's that time of year to make some presents for the family.  First up is a contraption for my lovely yet fierce wife. It should be pretty easy to guess what I'm making from this picture. 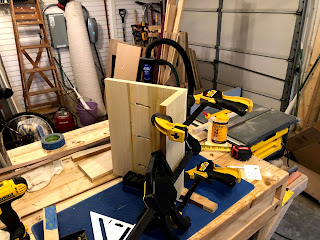 The weather is really warm for this time of year so I've taken a few days off to get these gifts banged out.

My sons is a bit smaller but a lot more difficult.  I may need a fall back plan for that one
Posted by Miles at 2:57 PM 1 comment: Links 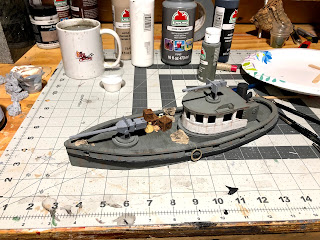 This little boat is setting out in harms way this morning.  The guns are actually shore emplacements but look both cool and silly on the trawler. 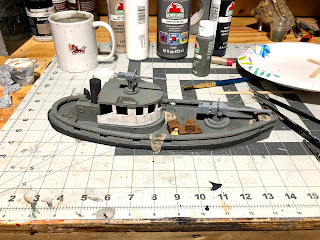 Lets us all hope that fate is kind to this humble fishing trawler.  I suspect you all might see it in a video in a few weeks. 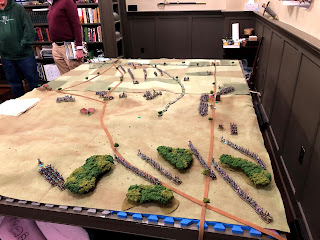 Last night I ran a refight of the Battle of Salamanca at the club.  We used the ESR ruleset which worked out very nicely, especially simulating the early morning maneuvering the came before the fight itself.

While the historical outcome was a decisive British victory, both armies were evenly matched, with the British having a slight advantage in infantry while the French had a tad more in calvary and artillery.  ESR also simulates the tactical doctrinal differences nicely with the French having a smaller number of large formations while the British having a lot more smaller more flexible units that done have as much staying power but are very flexible to use.

The French are entering the board from the lower right side. 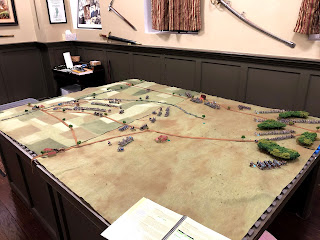 Another shot of the initial set up showing the build of the British Army marching up for Salamanca (upper left).  There are a number of hills on the right side of the picture that don't really show through in the picture. 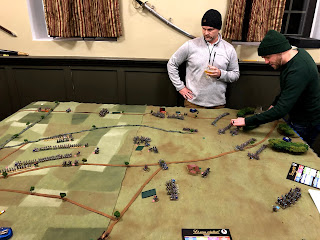 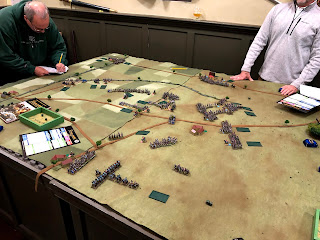 As Curto's calvary approach they discover that Marmonts telescope needs some refinement as what was thought to be the baggage train is actually Packenham's 3rd division!  This event also happened historically and was a really fun surprise to spring.  The French also had a surprise - they could have one of their divisions move Off-map 18 inches per turn and then enter where they wanted.  The trick is once those orders were set they could not be changed.  The French picked well.  It came on about where Josh's hand is now anchoring the extreme French right flank and allowing the two divisions by Josh's hand to switch to the attack.  It was a very well timed move. 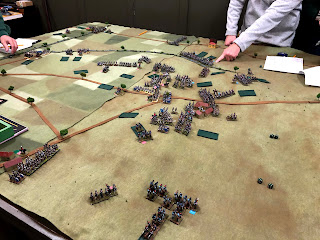 With the Light Cav checked on the French left flank, the battle moved on to three separate actions, with each becoming more important and successful for the French as we moved left to right along their line. 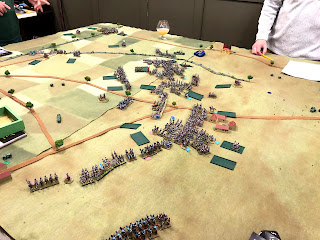 The British center division gives way which allows the French to gang up on the Brits left flank by sending 3 divisions agains the lone British one. 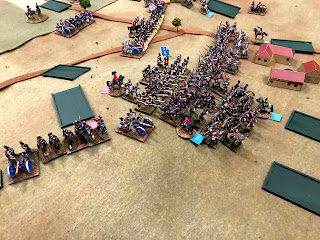 The French assault on their left flank stalls out as Tony attempts and massively fails an order change which effectively allows 2 French divisions to idle and trade pot shots with the British.

Here's a hint for ESR, which bases died roll on 2 D6's - DONT ROLL TWO ONES.  Something always really bad happens. 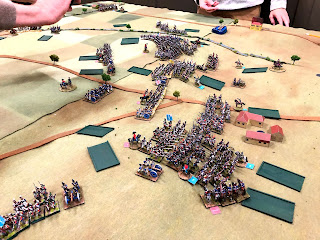 While successful on their right flank the British center and left flank collapse under the weight of the French attacks.  It was a very close run as most of the French divisions were one or two fatigue points away from collapse. 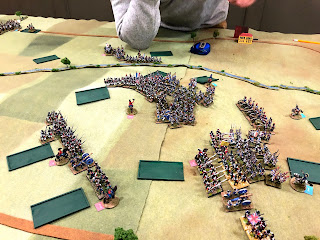 I do apologize for the ugly green rectangles,  They are movement trays for attack columns that I have pressed in to service to be Reformation areas for each division.

Given how much we like the ESR tules set, I'll be making proper ones to use in the next game.

This is the third time I put on an ESR game at the club and I must say the rules are a lot of fun and provide a very good game.  This one could have gone either way, but a rare French victory in the Peninsula isn't that bad of a thing...