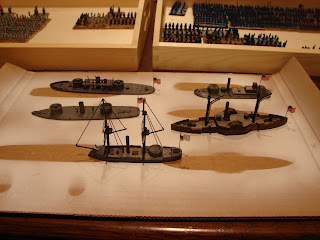 I made some more progress on some additional ACW Ironclads, finishing 4 Union and 1 Confederate vessel.  I have three left to build, another Union side wheeler (as shown in the photo) and the Raiders CSS Alabama and USS Kearsarge.  All the models are from Thoroughbred Miniatures and I continue to like building them.  My ending naval forces will consist of 8 Union vessels and 6 Confederates. 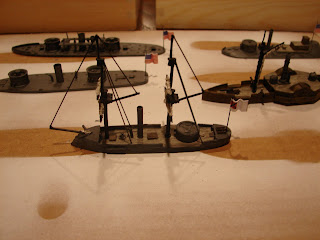 The one confederate vessel I built this go-round was the Ocean going ironclad the CSS Stonewall.  I thought it was a neat looking model.  The rigging is minimal but I will be adding some etched brass ratlines that I ordered from White Ensign Models.  Given the trials of the game table and that I have trouble tying small knots due to some motor skills issues from a stroke a few years ago, I decided to use thin brass rod for the rigging.  It supports the masts and is (for me) easier to install.  I also us a tiny blob of green stuff on each end of the rod to hold the brass in place while the glue dries.  I like how it came out and will be trying the brass rod on some Langotn's also.  One does need to be pretty exact with the lengths so I use a caliper to make an exact measurement.

I've also been filling out my 6mm ACW armies and finished 10 regiments of Union Infantry and 2 Regiments of Calvary.  Each regiment is based on a 60mm x 30mm base and has 28 figures.  I would equate painting a 28 6mm figures to painting 2 28mm Napoleonic figures.

I should apologize for the limited posts, but we've been busy at home over the past few weeks.  My wife hosted a reception for her women dental students last weekend which required a lot of prep work.  I had to attend to serve the food and play the dutiful husband.  As you can see from the picture below, it was tough duty, but someone had to do it.  My wife (Mary Beth) is on the far right of the first row. 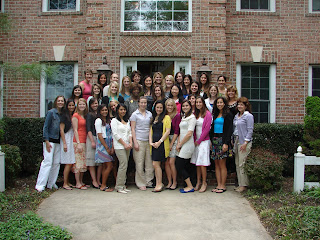 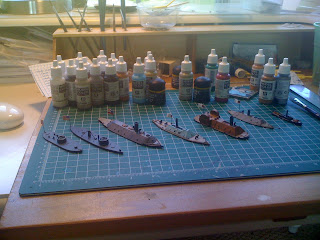 I purchased some Thourobred Miniatures ironclads at Cold Wars and just finished them.  They will be used in an upcoming game I'll be hosting for the club over the summer.  The models are really nicely cast and very easy to build.  After priming, the I managed to paint the seven vessels shown this morning in about 3 hours. 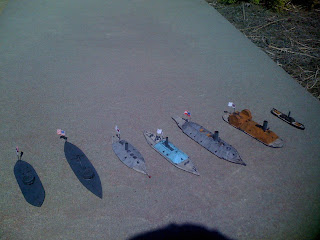 I have noticed the the fleets are not very balanced as I have only two Union ships to oppose 4 Confederates.  I'm sure Mr Barrett over at Thoroughbred will help me balance out the forces via a second purchase.  I do have one ship still to build, the CSS Raider Alabama.  It's a more involved project as it has some rigging and I've sent off for some 1/600 ratlines to add to the model.  I still need to base the models as that will reduce some of the wear and tear from game play usage. 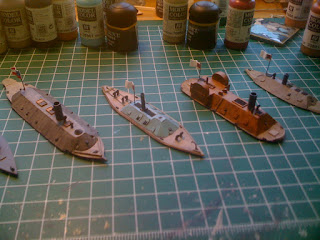 My plan is to use the models as part of a campaign game that uses my relatively large 6mm ACW figure collection.  The land battles will be fought using the "Black Powder" ruleset and I still need to pick a simple ACW naval ruleset.  The campaign will be simulated using a double blind 20x20 grid map that will allow for naval movement.  I'm still playing around with the rules but think it will work pretty well.
Posted by jmilesr at 2:34 PM 5 comments: Links

As I mentioned in my earlier post, one of my gaming buddies, Ernie and his wife Barb, have decided to go into the gaming business under the name "Architects of War".  His company will be making it's public debut at the Salute show in the UK later this month and at Historicon in the US.  Architects of War will be manufacturing 28mm scenery products.  I've has the opportunity to see some of his stuff and it's fantastic.  The initial product run includes a series of large (8 or so inches long) fortification sections (as pictured) and a whole host of smaller detail items like wells, campfires, road-signs and even a top notch pig-sty! 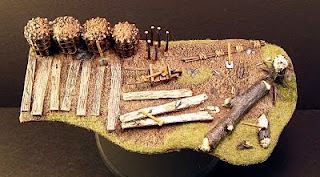 The fortification sections come in straights, angles and such and even have an piece that's "under construction".  I'm the product line will expand as their business grows.  Ernie and Barb have a very deep knowledge of the product and market as they used to run a business called Barb's Bunker a few years ago.

Now here's where you come in - Ernie's looking for some customer feedback (positive and constructive) and, I suspect, he'd also like to hear about some suggestions for new products.  Please take a few minutes to wander over to the Architects of War blog and see what he's up to.  It's a pretty daunting exercise to start a new business in today's climate so any potential customer feedback can be both very helpful and encouraging.
Posted by jmilesr at 8:03 AM 2 comments: Links 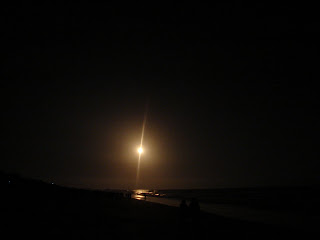 While on vacation in Florida, my son and I went down to the beach to watch the launch of the Shuttle Discovery this morning.  It's an amazing event to both see, hear and feel.  We were on the beach next to Patrick Air Force Base and had a great view of the launch.  The Discovery went off right on time at 6:21am and was visible for about 10 minutes.  The timing was perfect as the sun came up during the flight.  To quote Sean - "that was really cool!"

I do have some war gaming news to report.  My friend, Ernie, has decided to enter the war gaming business and is making some fantastic terrain items.  Ernie's handiwork has been featured prominently in the blog so his craftsmanship is top notch.  This is not his first foray into the business side of the hobby and he and his wife used run a terrain outfit called "Barb's Bunker".  Luckily for his future customers, Barb is also involved in the latest enterprise.

The new venture's name is "Architects of War" and they have a draft blog started where you can see some of the initial products - the defensive works look fantastic.  Take a look: