Painting and Preying (Mantises that is) 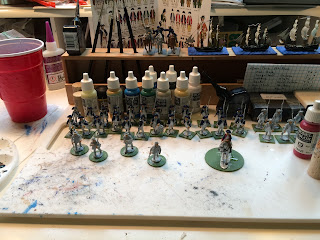 My current painting speed is making glaciers look fast.  Just a little bit more progress on my first AWI unit - the blues jackets have been painted for 24 infantry figures and the officer is fully painted but still needs a wash.  I tried to take some close up of the officer but they came out very poorly.  Perhaps this I-phone isn't the best of cameras...

I really do need to get into painting form as my current level of production is really very poor.  The weather has just been too nice to spend time indoors.

This weekend was eventful.  On Saturday we had 30 mile an hour winds and I went to check on the sail boat and while aboard retying the sail cover managed to fall and bang my head and almost go into the drink despite the boar being tied up in the slip - it was very rough.  Still it was an ignoble way to get injured but a good reminder that going out alone isn't the best of ideas.  Has I been underway and this happened, the outcome may have been much worse.  I left the marina with and bloody head, a headache and a damaged ego but none-the-worse for wear.  For those of you who are concerned, rest assured my rock filled head did little damage to the Bucentaure's deck. 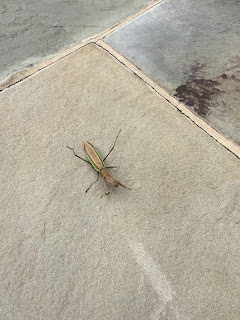 With the weather turning crisper, wildlife activity changes on the Bay.  One of the cooler things are the Preying Mantis's who mate and lay their eggs in the Autumn.  Our pool patio area seems to be the local "Mantis Singles Bar" and we'll see them out there on a daily basis through October looking for a "hook-up".  Pictured is strapping young lad on-the-prowl.  The pavers are 2 foot squares so he was six inched long. 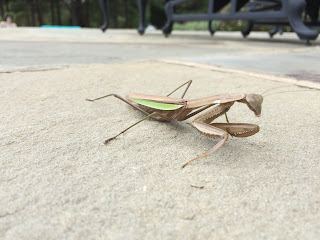 A close up of our lothario with compound eyes.  Males have a mix of brown and green.  These are amazing predators and tend to ambush their prey.  I've even seen a large male grab and kill a small humming bird!

As garden protectors, Mantis's are cool to watch but not all that effective as they eat anything - both good and bad bugs. 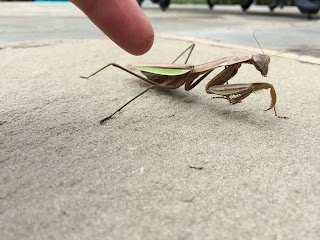 My finger provided for size. If it wasn't mating season, I could have coaxed this nice chap into walking up my arm for a while but his attentions were fixed on a very attractive young lady at the edge of the patio (about six feet way). 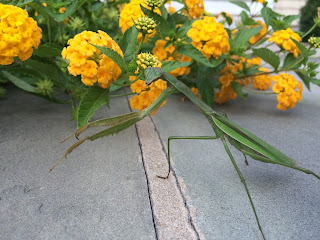 And here is the objective of his affections - a striking female mantis with an alluring "come-hither" look.  Females are all green and tend to be in the 5 inch range.  Despite their smaller size they are the more dominant of the sexes and often bite the heads of their mates.  There are many traits in the animal kingdom the span species. 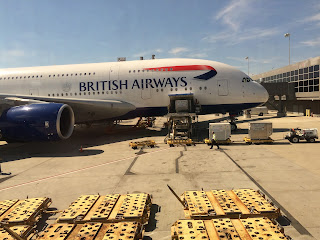 Not a lot of paintwork this week as I spent the week in London on business.  As usual, London was a lot of fun but a but hectic as it was the lead up the opening of the Rugby World Cup.  One of the highlights of the trip was the transportation - I always fly British Airways to Europe and this trip I was able to fly both ways on one of the giant A-380's - it's a fascinating piece of equipment and was a lot of fun to fly on. 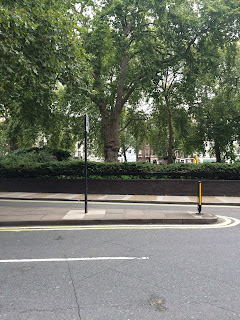 I will not bore you with the business details of the trips - a board meeting, meeting with some new companies that might be attractive investments (most of whom frog march you through a power point deck...)

I tend to take random pictures, like this one of Cavendish Square - it's outside the office of a new company of an interesting company who didn't use a power point deck and just wanted to discuss strategy options - both very refreshing and promising. 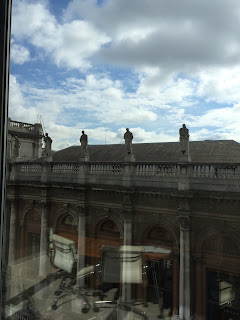 There are a number of UK firms we co-invest with located down in the city and one has probably the best office location I've ever seen - right across the street from the Royal Academy of Arts.  I don't even want to know the cost of their real estate.

The week was filled with approximately 12 not very memorable meetings, 3 interesting ones and board meeting so it was productive.  The evenings were filled with me gorging on Indian food but I did get to host a dinner at my favorite place to eat in London "Chez Patrick" in Kensington.  It's a great neighborhood french place and the owner is a real character - especially is you ask to see his California Wine list or request "Freedom Fries" with your scallops.  He and I have a standing joke/threat that if I pull up to the place in a big American Ford F-150 pickup truck, he'll add BBQ to the menu listing.  From my experience few places in London combine a reasonable price level with superior food / and a relaxed atmosphere better than this one. 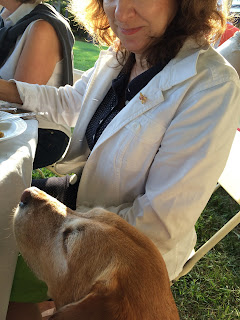 The night before I left for London, my lovely wife and I attended a birthday party for a friends dog (named Creek).  It's really just an excuse to throw a party but it was fun.  As you see in the picture the guest of honor took quite a liking to MaryBeth and followed her around all night.  I think that means we net to get a dog!

Hobby wise, I still have a unit of AWI Continental regulars to finish off and I'll be re-organzing my workshop over the next few weeks.

A rainy and windy weekend is a perfect combo for painting and sailing. 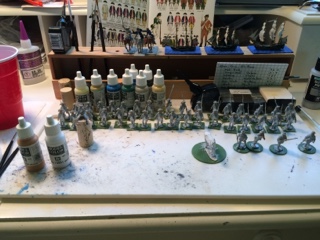 I actually managed to do more than prime some mini's.  The first two colors have been applied - Medium fleshtone and a flat white (pictured to the lower left).  I take a bit of an assembly line approach to painting units doing one color at a time.  I find it reduces errors and really helps me keep a unit looking like they belong together. 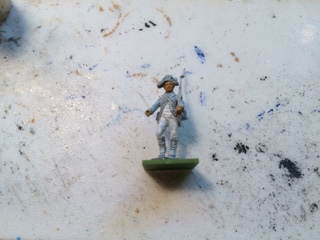 A close up of one of the figures.  These will be a Maryland regiment so will have blue coats with red facings.  It does feel good to be painting again 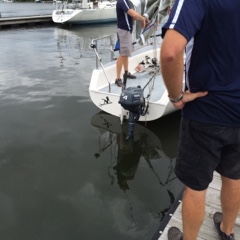 On satruday, I had a race in Annapolis and it was a perfect race day - 18-20 knot winds a little chop and rain.  I was crewing a friends boat but really wanted to have Bucentaure in the race.  There was some excitement.  During the third race a boat form another class (pictured above) lost her rudder.  It's hard to see in the picture but the rudder is completely sheard off just about the water line.  A sailboat without a rudder in high winds becomes a torpedo untll the sails are loosed but there was no collisions.  Maybe it was better the Bucentaure stayed in St Michaels. 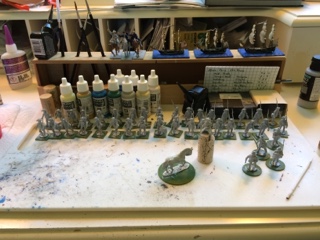 I have finally managed to pick up a brush and start painting some mini's.  OK, I just primed them but it still involved a brush.  Yesterday, I primed the 38 plastic Perry 28mm US Continentals (AWI) along with a mounted command figure from Fife and Drum.  I'm trying to vary my painting techniques and decided to use a brush on primer rather than use a spray on version. 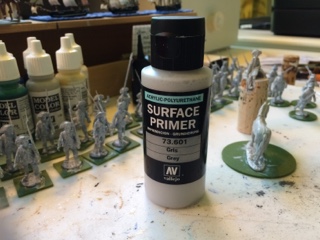 My primer of choice are the Vallejo surface primers.  The local hobby shop had a sale on these so I've stocked up.  I still stuck with a light grey as a primer color since these guys will all be wearing white pants, vests and webbing.

Unfortunately my painting bliss was interupted by my wife yelling for me to get outside.  Her tone of voice had a bit of alarm in it so I sprang to action.  It's times like these where having ones own action theme music would come in handy.

What was causing the constern - this attractive young lady... 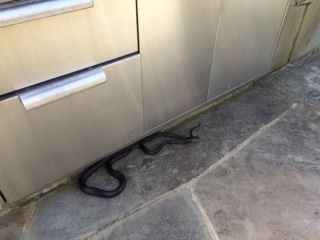 A rather large (6 feet) water snake that was snoozing next to our grill.  I got out my trusty snake - wrangling tool and set to work moving the snake out of the way.  These beauties are mice killing machines so you actually want them around the house but just not in plain sight.

So what is this tool?  A pool skimmer 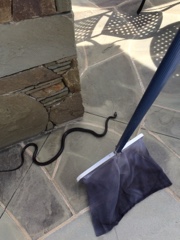 These snakes are constrictors and if you grab them behind the head they will wrap around your arm and are both difficult to dislodge and one can injure the animal while getting them loose (I learned the hard way).  With the pool skimmer, you can prod them to an open area and then place the skimmer in front. I think it looks like a cave and they crawl right into the bag and they're easy to carry away.   Of course getting them to stay in the bag during transport (roughly 250 ft) is another thing.  The photo below swows her just before being released.  Hopefully todays painting will have no reptile intrusions! 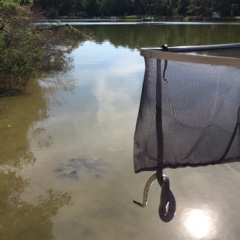