A Change of Pace 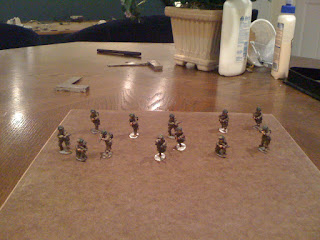 This weekend I decided to give the Nappy's a bit of a break and paint up some WWII items.  First on the list were some 28mm US Paratroopers from Warlord Games.  I picked up a starter force on a bit of a lark.  Overall, I was very impressed with the figures and found painting them to be a lot easier than those fussy frenchman.  I've completed 12 out of the 32 or so I have in the force.  These figures were a lot of fun to paint and there is a good deal of free info on the web for uniform guides and corresponding Vallejo paint colors.  I also found the manufacturer, Warlord Games, a pleasure to deal with and I recommend them highly.  While wandering through their site, I did see the new "Black Powder" rules which I've placed on pre-order.  Now all I need is a set of 28mm WWII rules to use with these guys - any suggestions?

I need to decide on how to base these guys.  I'll likely go with the 25mm round GW bases for individual figures and 40mm for crew served weapons (the 30 cal machine gun). 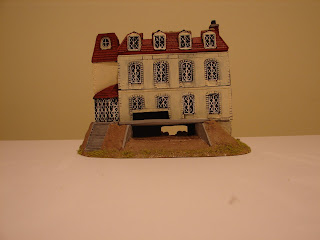 My second project of the weekend was a 15mm terrain piece.  I picked up a resin model of a fortified casino (as in D-Day) which I'm planning to use as an objective for a "Kelly's Hero's" scenario I'm planning using Flames of War.  I'm going to play test the game a few time with my son before inflciting it upon my local gamers.  The picture's not that great - I didn't realize the background wall was almost the same color as the model!  The floors are removable, which allows for a bit a room-to-room fighting in the scenario.
Posted by jmilesr at 10:03 PM No comments: Links 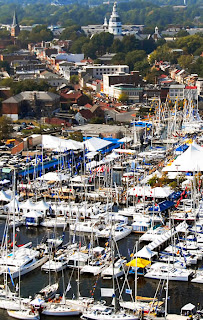 Sailing is one of my favorite past-times and, to be honest, it slightly nudges out wargaming for the top spot most the time.  One of my favorite events is the US Sail Boat show, which is held in Annapolis. The show is billed as the largest sail boat show in the world.  I'm not so sure about that, but it's a blast.  I've been spending most of my free time the past few days going to some of the manufacturer receptions and strolling about the show grounds.  To put the show in a wargaming perspective - it's like the vendor area at Historicon, except the venue isn't a big convention room is a giant series of temporary floating docks (over a mile) and the vendor stalls are boats.  The sizes range from small single person racing lasers (12') to two masted monsters that require a small crew to operate!

One can really see the impact of the economy by observing the show this year.  The discounts on the boats are very significant, especially if you wait until the last minute and the vendor is facing the cost of transporting the boat back to wherever they came from.  The spreads the vendors lay out are also reduced but that helps my waist line!  It's still very hard for sellers of new boats to compete right now with the used boat market right now, where the discounts are extreme and there is a very large inventory of boats that people bought when they thought they were flush.  There is a bit revenge here on my part for some of my former compatriots in the financial services industry.  One does reap what one sows.  Enough moralizing on my part.  There's a show rumor that the FDIC has a small tent with pictures of foreclosed boats they've taken possession of from bank seizures but I haven't seen it.

I'm not really in the market for a boat, but then again they are all so pretty and my son mentioned something about wanting to move up to the comet racing class.....

Of course, the most likely way you'll discover if I do acquire a new boat will be from my lovely and fierce wife's posting of my obituary.

The one unfortunate aspect of the boat show is that it has impacted my progress on my French Nappy's.  I've almost completed the grenadier unit and have made some good progress on the light cavalry.  We are heading into the prime wargaming season so I need to get moving!
Posted by jmilesr at 7:15 AM 3 comments: Links