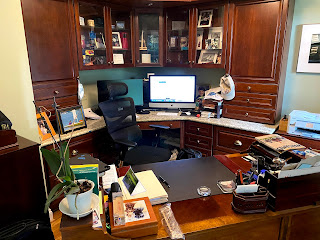 On Tuesday, I finally got around to cleaning out my office, which really hadn't been cleaned since the start of the year.  It's amazing how much crap one can accumulate during a pandemic.  Before you ask, there are no "before" pictures they are just too embarrassing - suffice it to say the papers covering the desk where anywhere from 12 to 18 inches deep and I really couldn't move the chair given the stuff that was "temporarily" stored on the floor.

I'd like to take credit for this amazing act of selfless organizational effort but that would be untrue.  Lets just say the CEO of the household suggested that I should, maybe, clean things up a bit.  You know, one of those offers that couldn't be refused. 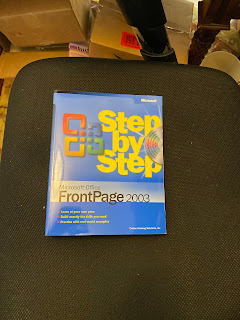 In cleaning out my cabinets, I found this really useful manual from 2003.  I don't even remember owning a copy of FrontPage.  There were a lot of other useless stuff I tossed.  In fact I generated 5 large garbage bags of paper that went to the incinerator.

It's really nice to have a clean office and I have pledged to keep it clean and organized from now on.  Betting has commenced on when that last statement is proven to be untrue with the prevailing sentiment being late September of this year. 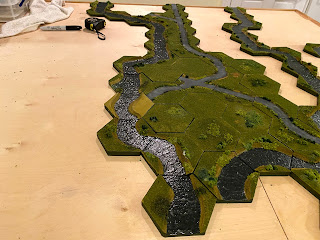 The major river hexes I need for "Secret Project 12AZ36" are pretty much finished and I've laid them out on the table.  Ignore the hexes in-between the rivers as they are more for spacing purposes. 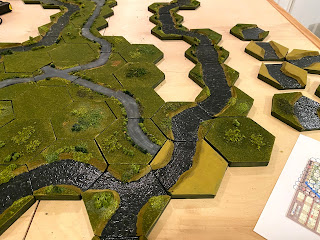 Whew - I made enough plus 6 extra.  Usually in these type of projects I make too few and need to add.

Why are a handful of hexes not fully done?  I suspect there will be some form of special terrain there... 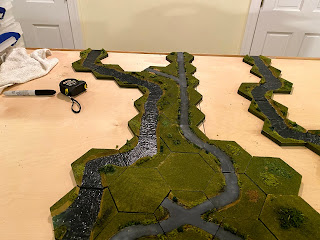 I like the look of the hexes but also see I need to pay more attention to flocking the edges. 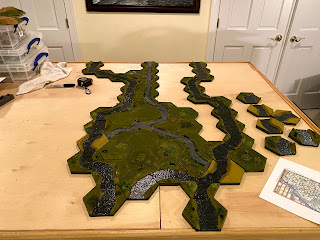 And the progress to date.  I have really enjoyed making these hexes and look forward to a lot more.  One of the more enjoyable aspects is each hobby session can result in some finished hexes - as they are small at 4" across flat side to flat side.  Most terrain projects tend to drag on over multiple sessions so that sense of accomplishment is often delayed.  Equally positive is one also fails fast, which is just as good.

It's a good thing I have found making hexes fun as one does need a lot of them.  To fully cover a 6x4 gaming surface one needs 216 hexes! 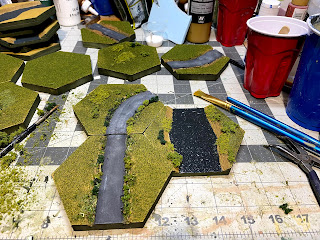 A close up on one of the river hexes and two road ones.  The texture on the river banks was super easy - just. a few passes with a wire brush and *presto* "instant" sedimentary levels.  The roads are also the same width as a minor river within the GHQ "Terrain-Maker" format. 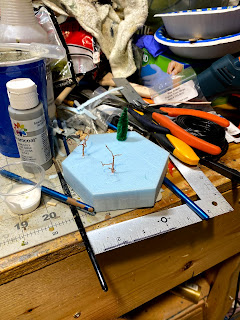 I've been experimenting with how to make tree's and forested hexes.  Standard Terrain maker forests have the trees permanently affixed to the hex, which looks great but can be difficult to play on if one is attempting to move troops on a hex in the middle of a wide board.  This issue is magnified for those of us who are encumbered with, ummm, excess provision storage around our waists (hey, I resemble that remark!).

I've been experimenting with different ways to make both trees and make them removable without excessively damaging the hex.  I think I've come up with a way that works by using small plastic tubes as sabots to hold the trees and covering the area with a forest floor flocking.  I've also been experimenting with making wire trees and pine trees from bumpy chennel.  By the way, there is a great "2 Minute Terrain Tutorial" on how to make 6mm pine trees on the Little Wars TV Channel - heres a link. 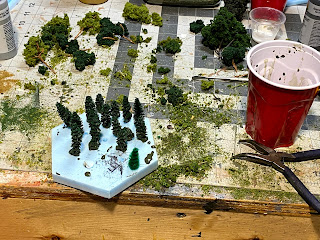 The green color is a little too bright so I washed all the pine tree in a 50/50 water / vallejo russian green primer.   I think it will look fine.

The copper wire trees proved to be too delicate so it's back to the drawing board there.  The plastic tube sockets worked great, so that's a keeper.

Once I figure out the tree method I'll do a more detailed "how-to" post. 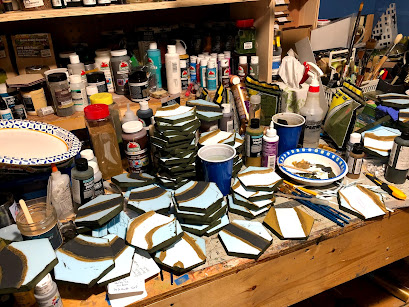 My Terrain workbench is a disaster but I have started work on a super top secret project for the club.  Since wargaming blogs pretty much guarantee anonymity on the web, it's ok to share with you - but no blabbing!  I'm actually excited to get working on this as its my first time making a lot of hex terrain.  Fellow club member and generally great guy, Ed, has an extensive collection of the GHQ "Terrain-Maker" hexes and I've always wanted to steal (oops I meant to say "emulate") that collection. 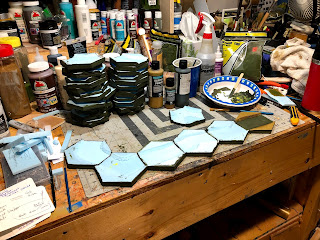 For this project we're going to need a lot of "Major River" and a handful of urban hexes.  The GHQ "Terrain Maker" system use standard sized hexes which are 4 inches wide flat side to flat side.  It also employs standard dimensions for road and streams that are 20mm wide and exit centered on the flat side of a hex.  For major rivers, I just made them wider and used just about all of the flat side.

As you can see, there are a lot of river hexes. 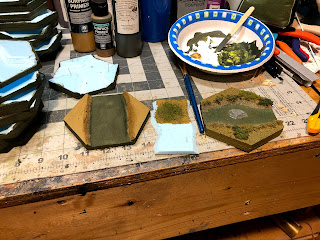 I've been testing different color matches and have borrowed one of Ed's stream hexes to match terrain coloring .  The streams are a bit greenish so to contrast a bit the major rivers will be a darker mix of green, brown and black paint.  I've got a good match for Ed's for the ground color and flocking. 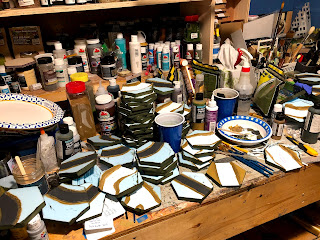 To paint the rivers, I used a white gesso as a primer for the river bed. 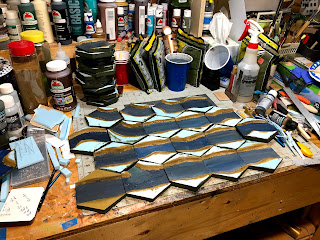 Once the gesso had dried, the rivers were painted using craft paint.  The colors are Brunt Umber (the war-gamers goto brown for scenery), Medium Blue and a Hunter Green in roughly equal proportions.  The trick is not fully mixing the paints so you can see faints streaks as its brushed on.  Work in small amounts of paint.  I'll do some touch up and then cover with a few coats of gloss modge podge to make it look wet and add some ripples.

I really need to clean up my workbench.  Lee over at the quarantined gamer you tube channel has an episode on just that topic - here's the link 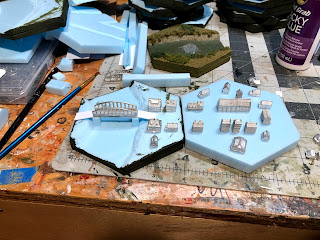 If one has rivers, one needs bridges.  Here's a shot of a test piece.  There still got some work to do on the urban hexes but the overall look of these 3mm scale castings from Pico Armor is pretty good.  By the way, I highly recommend the company - they have great products and superb service.

Hmmm, I wonder what we're trying to build out here.  Please be advised some of the clubs projects never see the light of day - usually because I'm involved and screw something up.  This might be one of them.

Making these hexes and scenicing them has proven to be really fun.  I've also got some ideas of using these hexes to bring some hex and counter games to the tabletop.  So many plans, so little time..... 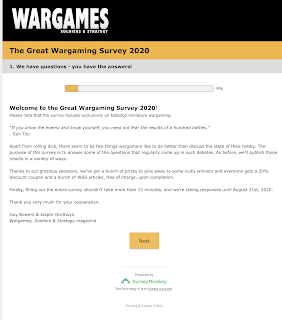 Its that time of year - take the Great Wargaming Survey from WSS at the following link:

The survey has become an essential tool in understanding our hobby and finding ways to support its growth, so please take a few minutes to fill out the survey.  I may have  even added a question or two so bonus points if you pick out which one.

Let's see if we can get past last years record breaking response rate of 11K.