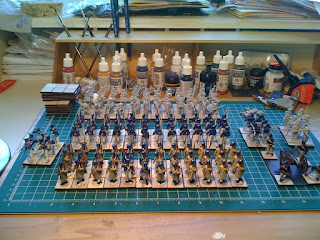 I've finished painting my first 36 figure battalion! Ok, I'm almost finished as I still need to finish the backpack tie straps, shade or "dip" the figures, and scenic the bases, but I'm rounding up today. As you can see, I've also got a second and third battalion assembled and partially painted. The first two formations are Perry and the last row is Victrix. Outside of some minor marking variations they work very well together. I also have 1/2 of a fourth battalion assembled with the extra figures in each box.
I have one more box of Perry's and two of Victrix to assemble and add into the painting pile. I'll need to pick up a fourth box of the Perry's so I can match up the with and without great coats versions. 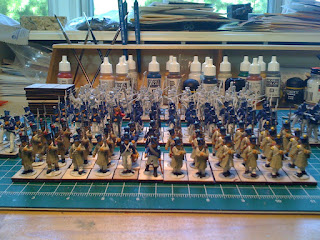 This weekend was my most productive painting wise - I completed 27 figures and got started on another 36. I think the quality slipped a little bit as I have more touch up work to do than last time but overall I'm happy with the results. My gaming club picks up it's activity in the fall so I need to be able to field an army soon - hopefully by the end of september I'll have 4 battalions of infantry and some artillery ready to go. If I get brave, I may even try to paint up some cavalry!
I did move my painting station from my office to our kitchen table, which allows for more direct sunlight and I can watch the football (NFL) games on the TV in the family room. We have Direct TV, which means I have the Sunday Ticket so I can watch any game while painting. I was able to watch my Saints spank Oakland while churning out painted figures. I like my "mobile workspace" more and more. 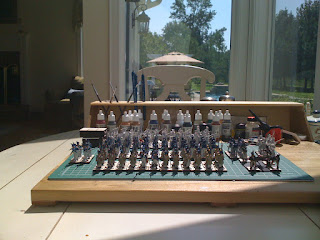 Posted by jmilesr at 2:39 PM No comments: Links

Summer's Drawing to a Close

Yikes! It's August 24th already, were did the summer go?
As the summer draws down, I'd thought I would look back to see what I accomplished war-gaming wise. For me, like most gamers, the summer is a period of limited gaming activity given the weathers nice and there's too much fun to have outside. After thinking a bit, I was surprised on how much I accomplished, especially when one "risk-adjusts" the results to reflect my glacial painting pace.
The biggest wargaming event for me this summer was my decision to add yet another time period and scale to my inventory - 28mm Napoleonics. The local gaming club ECAMGA has a large Napoleonic following and I was lucky to play a few games - it was a blast. So in time honored war gamer fashion, I executed the classic jump right in plan - you know, the one where you buy a bunch of figures, start painting, and then think about what you want. Thank goodness for the quality and low price of the new Perry and Victrix plastics! Despite some missteps, I'm really enjoying the painting and look forward to fielding my French force sometime in the late fall.
The other area of summer progress for me is building some terrain for the table top. Most of what I built is for my 15mm Flames of War stuff, but at least the table is looking a lot better. I did break down and buy some pre-fab hills the "Terrain-Guy" but most of the scenery is home made. As I may have pointed out in earlier posts, I used to be a model railroader, some I do have some decent terrain making skills.
Lastly, the other big change was with my son. Previous to this summer, Sean's wargaming was pretty much limited to playing with Dad (don't worry he took it easy on me), but as with most 14 year olds he found that somewhat limiting socially. This summer he has gotten into GW's 40K system and has been playing with some friends and other people at the local GW retail outlet. I've been very impressed with the whole GW experience even when I factor in their pricing. I never thought I'd be able to get the deck re-sealed for the cost of a new "Space Marine Terminator Unit". Hey, I think I just found a way to get the GW margins to work in my favor! It's nice to seem him develop some independence and take the hobby in his own direction. I think he'll still tolerate playing with me - as long as I don't tell anyone.
:)
Sean's other big news is he gotten very interested in competitive sailing so a lot of our summer was devoted to carting his around to different regatta's and such. All-in-all, it's been a grand summer.
I look forward to the Fall, as it's my favorite season, the weathers still nice in Maryland in September and October and all the tourists go away. The NFL is in full swing and my modeling pace picks up.
Happy Gaming!
Posted by jmilesr at 8:10 AM No comments: Links 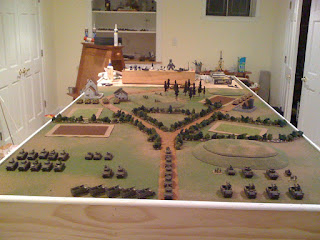 It was a rainy day today (thank you, hurricane Bill) so my son and I decided to play a game.
As a change of pace from Napoleonics, we decided to play a Flames of War (FOW) game pitting an American armored company attacking a depleted German paratrooper company with tank support. Sean played the Americans and I was the Germans. We didn't bother to tally up the point totals but the forces were roughly equal.
Here is the line up:
US Tank company (10 M4A1 and 7 M4AE8 Shermans)
1 Armored Infantry Platoon
1 M10 Tank Destroyer Platoon (2 M10's plus scouts)
4 Priests
3 M8 Armored Cars
P-47 CAS
German Force
2 Depleted Paratrooper Platoons
1 MG Section
1 Assault Gun Platoon (5 Stugs)
1 Tank Platoon (5 Pz IV's)
1 Heavy Tank Platoon (2 Tigers)
1 Artillery Section (2 105mm) 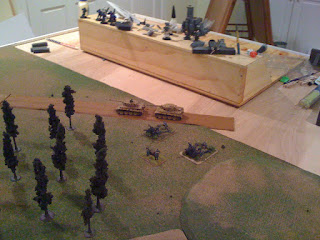 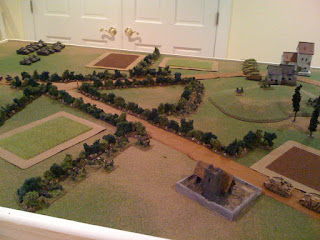 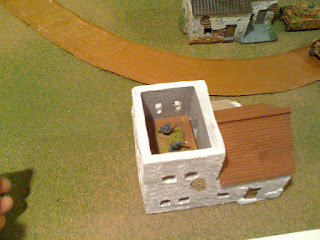 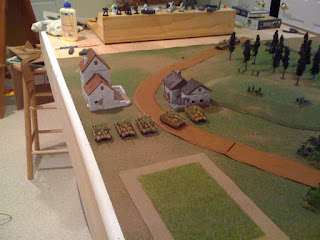 Well, it seems we took a lot a set-up pictures, but then forgot to take any "in-game" shots - Dohhh! Never fear, those doughty Americans with their air cover won the day, although it was a close run - Tigers can be very handy in the bocage. This was one of our first FOW games on the new table and I think it looks pretty good. I need to build some more bocage sections and some hills but our scenery is shaping up. Some of it is "store-bought" but that's OK - at least we're playing.
You can see some of my son's 40k stuff in the background of some of the shots. He plays Space Marines and is building the new "Ironclad Dreadnought". He's gotten back into 40K in a big way. We're fortunate to have a store and one of the "battle bunkers" close by so he's been doing some playing lately. I hear a lot of negative chatter about GW, but our experiences have been very good. They do charge an arm and a leg for there products but there is the overhead of the game stores/experience and they own the I.P. From a business perspective you gotta respect those margins!
Anyway that's all for tonight. Sorry about the picture quality, I was using my I-Phone tonight.
Posted by jmilesr at 9:48 PM 4 comments: Links 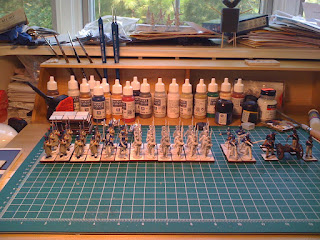 I just completed painting 9 more French infantry figures and finished basing the entire battalion. It took me about 2 hours to finish this batch of nine plus get started on 9 others so my pace is picking up. I must say I'm enjoying painting these Perry figures and my confidence is growing that I may yet end up with a decent army. Of course, I haven't tried to paint 28mm horses yet.
I did get a good bit of basing material from Litko. The basing configuration I'm using is individual figures on 20mm x 20mm wood squares with a magnetic backing. These squares on then mounted on a 60mm x 4omm metal base for each infantry company. There will be 6 companies per battalion (1 grenadier, 1 skirmisher, and 4 line). The club rules we use require individual figures be removed for casualties so magnetic basing was the way to go.
Here are some more pictures of this latest batch: 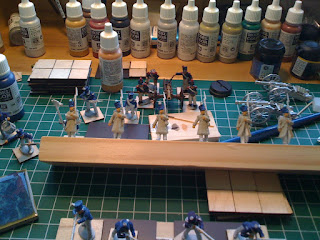 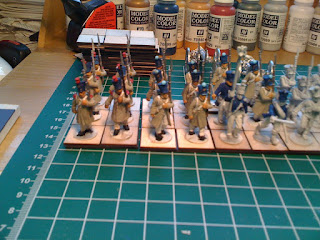 You might notice in the background 2 unpainted cannon. They are from Old Glory and are supposed to be 12 lbrs. I also picked up a pack of artillery crew (20 figures) 2 more cannon (8 lbrs), and 4 limbers. Overall, I was disappointed in both the quality of the figures and the smaller size - the 12 lb Old Glory cannon is smaller than the 6 lb Perry one! Given that I really like the Perry figures, I doubt I will use the Old Glory cannon or crew. I may use the cannon for a scenery piece. They were not that expensive so I'm not that put out about it (one more example of impulse buying = bad outcome). I will use the limbers as they are serviceable and the limbers from Perry or Foundry are astronomically priced.
Posted by jmilesr at 4:11 PM No comments: Links

Ok, normally I'm a big Apple fan and love my Mac Book Pro laptop and pretty much the entire look, feel and functionality of software that's built for a Mac. But now there is one exception. I have grown to really despise both I-Web and the Mobile-Me publishing environment. I'm sure a lot, if not all, of my frustrations are due to user error on my part - but that's the point. The aforementioned and never to be referenced again packages are supposed to let a moron like me dance upon the internet just like Al Gore did when he invented the damn thing. Alas it was not to be and I have been awakened from the narcotic stupor that Apple's marketing efforts had ensnared me in. I just hope I can moderate myself and not go back to, shudder, Windows.
So as of today I'm moving my website to a free service (Blogger) as it seems to be both highly functional and easy to use.
It will take me awhile to get all the pictures moved over and learn how to work the image aspects of blogger.
Posted by jmilesr at 8:05 AM No comments: Links 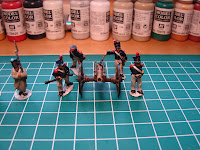 We’ll I’ve completed my first group of 28mm French Napoleonic troops - a 6lb artillery piece with 4 man crew and the first 6 infantry (2 grenadiers and 4 fusiliers). All of the figures are from the Perry brothers (plastic infantry, metal cannon and crew). I’m trying different forms of shading - the artillery crew was “dipped” in the Army Painter medium tone product and I used the GW wash “Delvan Mud” for the infantry. I think I like the GW shade better.

I do need to coat the lot with a matte spray but it was very humid today, so I’ll be waiting a bit - I’ve heard some horror stories about matte spray applications and humidity, so I thought lets put that step off.

I am finding that painting in a “production line” method helps me control the brush better when painting details (straps, facial hair, etc). While these are not up to the standards of some of my club members, I’m very satisfied that we’re off to a good start.

Here are some more pictures - let me know what you think! 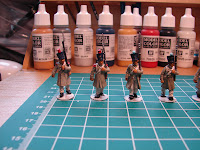 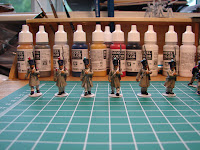 I’ve made some progress building painting and building some of my new French 28mm Napoleonics. My infantry is all plastic figures from either Perry or Victrix and I’m developing a relatively informed opinion for both. Here are what I see the strengths and challenges for each set:

I plan on using both. I will use Perry for may basic line infantry battalions and I’ll use the Victrix for my “elite” light battalions that fight in open order based on the rules my club uses. If I had to pick only one, I’d go with Perry, but that’s more because I’m just starting out and want to field a force fairly quickly.

Posted by jmilesr at 7:25 AM No comments: Links