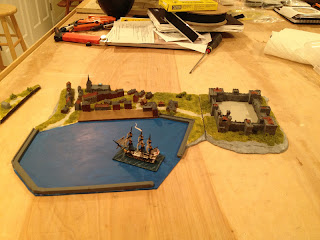 Before solely focusing on 28mm War of 1812 stuff for Fall-In, I wanted to finish up the 1/1200 scale port to be used in Napoleonic naval games.  I think it came out pretty well. 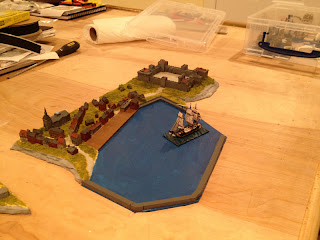 This is a small port that's defended by a large fort.  It might be viewed as a bit "over-board" for what in game terms is a simple objective but I think good scenery adds a great deal to a game experience. 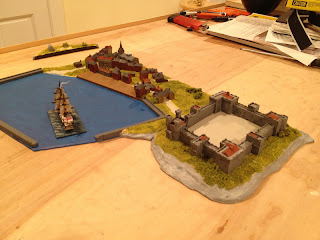 The fort casting and all of the houses / sea wall sections are manufactured by Langton Miniatures, who also put out superb ship models. 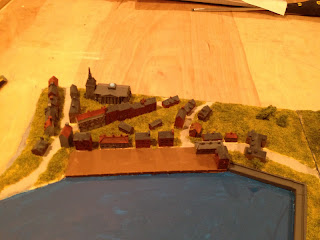 Here's a close up of the town.  I have some details to add to the dock sections - piles of naval supplies and spare masts and will get around to that in the next few weeks. 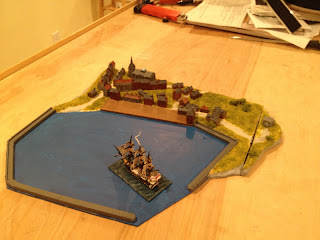 I decided to make the fort optional and have a small piece to add in for scenarios where the fort isn't really needed.  This was a fun little project!

Planning for Lundy's Lane at Fall In 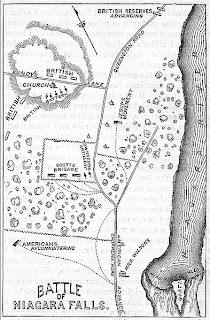 I will be hosting a largish game (at least to me) at Fall In that will attempt to recreated the battle of Lundy's Lane from the War of 1812.  The respective armies are mostly done - I still need to do a few British command stands and maybe a unit of Congreve Rockets.  The next big step in the preparations will be the Terrain.  The main feature of the battle was a large hill that traded hands several times during the battle along with woods and a farmstead.

The table size will be 5 feet x 10 feet and I've decided to build some terrain boards rather than go with overlapping terrain mats.  The boards will be 2ft x 5ft sections and umm I guess I'll need 5 of them! 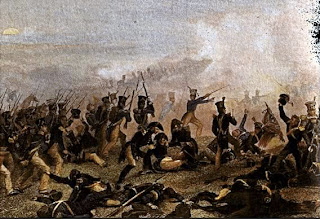 I'm still trying to work out how to model the hill but it will be roughly 2ftx3ft and I need to terrain it so it works with both 28mm and 15mm (Flames of War).  Hopefully, I'll get the frames built for the terrain sections and hill this weekend.  I've got some Renedra fencing and the new cabin from Architects of War will do nicely for the farm.

This will be a "big battalion" game with 36-40 figs per battalion and 9-10 battalions per side.  Now to be honest, the orders of battle will not be exact representations of who was at the battle but more "representative" of the battle and units involved in the War of 1812.  Think of this game like those Hollywood historical epics that are "inspired by" actual events.

I am very pleased to announce that the game will have prize support from not one but two vendors at Fall-In - Architects of War and Knuckleduster Miniatures.  If your interested and going to Fall-In, please sign up when the PEL gets announced
Posted by jmilesr at 7:27 AM No comments: 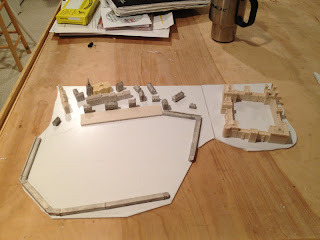 I'm taking a short break from 28mm War of 1812 to work on some terrain for my 1/1200 Napoleonic Naval collection.  A port would be a nice feature to add for some new types of scenarios - convoy protection, raids, invasions etc.

The first photo shows the port in a table edge configuration along with an imposing castle to protect it.  The buildings are all from Langton. 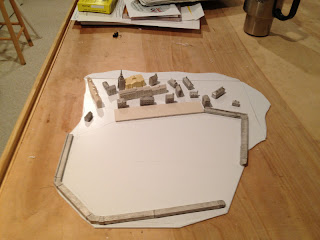 Here's a shot of the port configured as a very small island.  I'll also be able to do an island configurations with the fort by switching the right end piece to the "table edge" of the fort section.

I'm still playing around with the configuration of the houses but will likely start adding scenery in a day or so.

Any suggestions are greatly appreciated

Like a lemming, I'm following Fran and Ray's example and answering the 20 questions.  I warn you, this foray into the very essence of the Uber Geek isn't pretty - you've been warned!

1.        Favourite Wargaming period and why?
1/1200 Napoleonic naval - all those pretty Langton models and not that many people to compete with

2.       Next period, money no object?
This is a tough one, but I'd have to say the Seven Years War / French and Indian Wars.  All the pretty uniforms and varied terrains make for a big investment

3.       Favourite 5 films?
- Seven Samurai
- The Searchers
- Young Frankenstein
- The Producers (the one with Zero Mostel)
- Inception (ohhh, I feel so trendy now)

9.       If you had a only use once time machine, when and where would you go?
- Back to meet Thomas Jefferson

10.   Last meal on Death Row?
- Something with lots of beans so I could get one last parting "shot" on the way out

11.    Fantasy relationship and why?
- My wife, 'cause she reads this blog

15.   Historical destination to visit?
- The Pryramids

16.   Biggest Wargaming regret?
- Not getting started in the hobby earlier

19.   Favourite Wargaming Moment?
My first game of 28mm Napoleonics.  I quickly found out that marching British infantry, in column formation, into French guns equals disaster and I spent the rest of the game cowering behind hills.  Despite that, the whole spectacle on Ernie's table top had me hooked!

20.   The miserable Git question, what upsets you?
Dishonesty

War of 1812: US Marines and Naval Gun Crew Completed 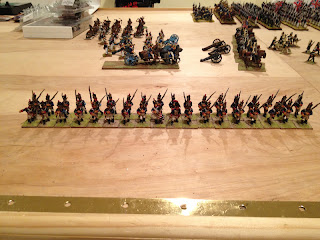 Some more progress on my War of 1812 project as I managed to complete both a 36 figure US Marine unit and a Naval gun crew along with a 24lb gun (well not really...)

All of the figures are from Knuckleduster and I enjoy painting them. 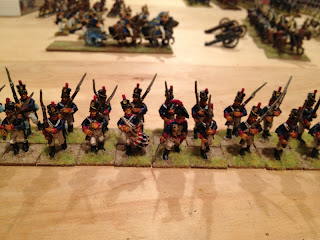 Here's a close up of the Marines.  Both US and British Marines didn't carry colors into battle as they were either borne by the ship they came from or left in the barracks.  The uniforms had gold piping and buttons and these gentlemen will definitely stand out on the table top. 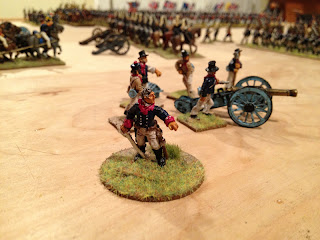 Here's a close up of the Joshua Barney.  I've based him as a leader (hence the larger round base).  I'm very happy with how he came out.  The base is a bit bare so I'm thinking of adding a split rail fence and some other details. 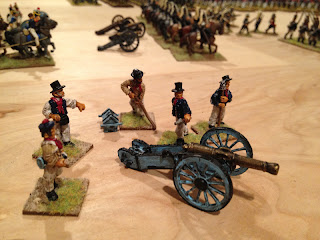 A close up of the Naval Gun crew and their trusty 24 lbr.  Well it isn't really a naval gun, it's really and Old Glory casting of unknown pedigree that I found in my lead pile and have pressed into service.  It's a bit bigger than the rest of the guns so that says 24lbr to me!  I really like how one of the figures is using his pistol's flint to fire the cannon - very charecterful figures. 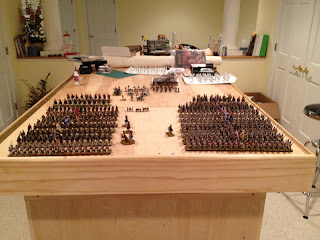 Here's the 2 armies as they stand.  Nine completed British Battalions and eight US plus some calvary and artillery for both sides. 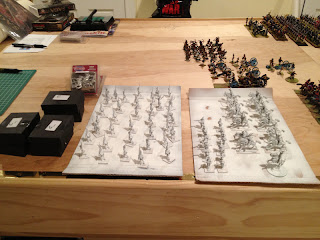 Next up on the painting queue are some mounted Kentucky rifles (with dismounted figures) to the right and another 36 figure Maryland militia unit for the US.  I also have some Victrix metals for the British command stands and three artillery limbers.  All of this is in anticipation of hosting a game at Fall-In so I'll need to get to play testing in a few weeks.

War of 1812: US Marines Painting Progress 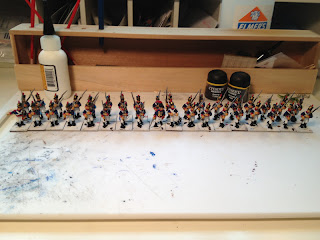 A good bit of progress on a 36 figure US Marine unit for my War of 1812 project.  Over the weekend I completed the basic painting and now need to finish both some details, touch ups and  apply the GW washes to clean up the lines.  These figures are 28mm and are manufactured by Knuckleduster Miniatures. 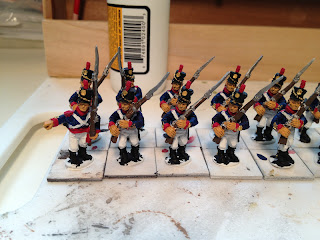 I'm hazarding a close up pictures of the "work-in-progress" which shows my shaky hand.  As a lazy painter of dubious skill, I've grown to rely on the use of a "dip" wash (applied with a brush) to make the minor imperfections fade away and add depth to the figures.  The Knuckleduster range really benefit from the washes given the prominent features in their sculpting style.  Unfortunately, my wash of choice are the discontinued GW washes.  I think I've ranted enough about that topic...

Next up will be Joshua Barney and his flotilla men who served as artillery crews and makeshift infantry.

All of this painting is being done in preparation of a game I'll be running at Fall In.  My original plan was to refight Lundy's Lane but now I'm leaning towards Bladensburg given the mixture of units at the battle.  Either way the game will be a big one and will use "big battalions" (36-40 figures per) which always look good on the tabletop. 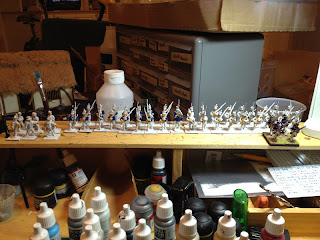 Some painting "in-process" shots of more figures for my 28mm War of 1812 collection.  A 36 figure US Marine infantry unit and a 6 figure naval gun crew.  All of the figures are new ranges from Knuckleduster. 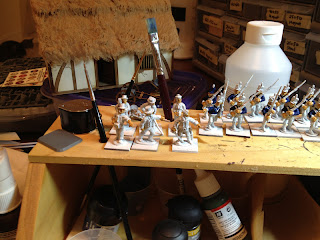 Here's  a close up of the Naval Gun crew.  The figures are Joshua Barney and his unit of flotilla crewman who fought as infantry at the Battle of Bladensburg.  The flotilla men and a detachment of Marines were the only units that didn't run away during the battle. 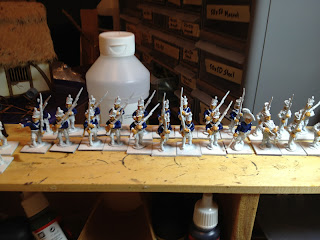 Lastly, a closer shot of the US marines.  These uniforms are a bit more ornate than the standard US infantry but they should be fun to paint.

After this batch the next unit in the painting line will be a 36 figure Maryland Militia unit.