All Quiet on the Painting Front 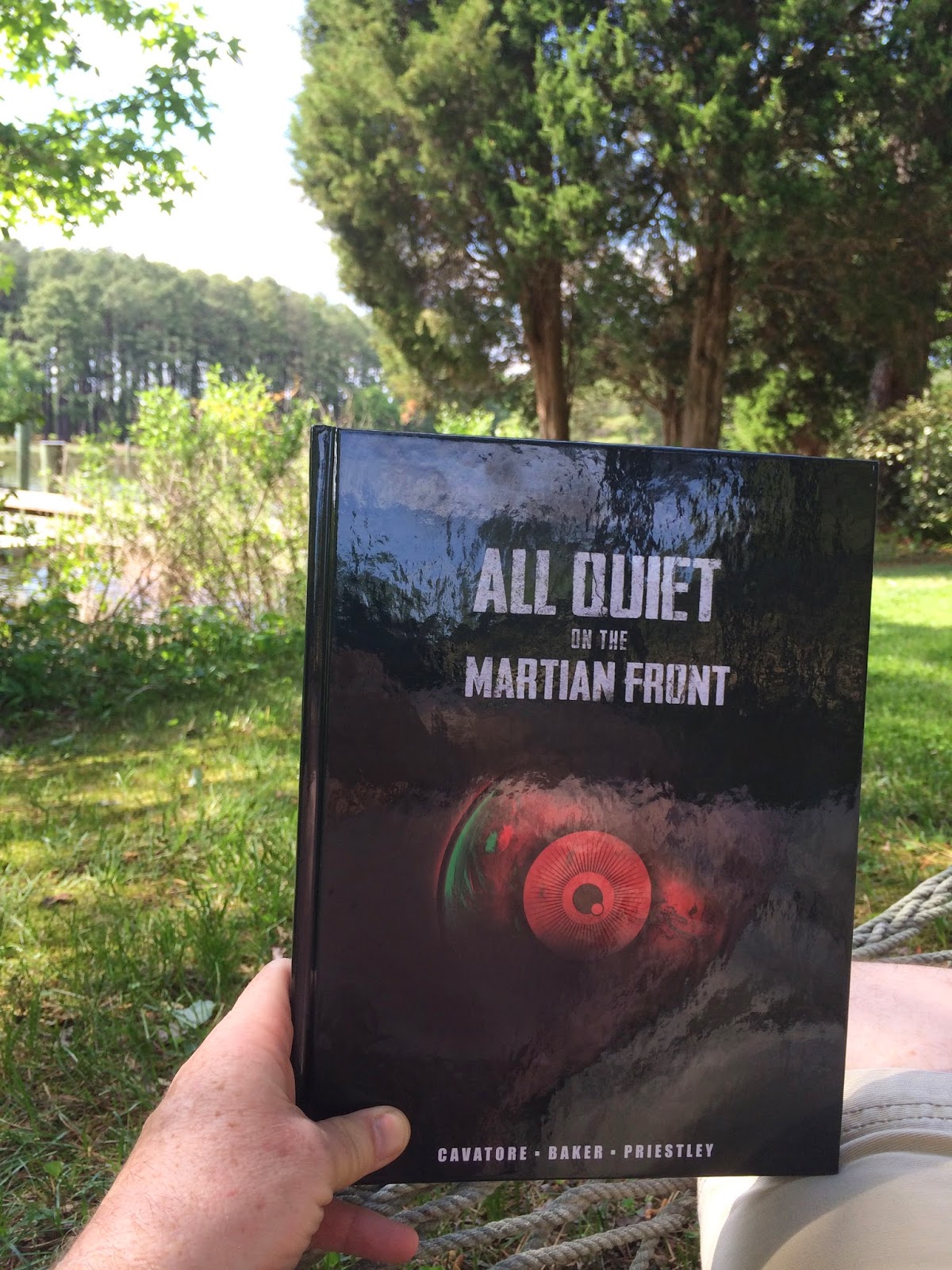 Not a lot of progress here in the Geek's Lair on my new All Quiet on the Martian Front (AQMF) toys.  As a present, my wife signed me up for a week long Performance Sailing course over in Annapolis which has proven to be both very fun and very tiring - we're out on the water about 9 hours a day zooming through Annapolis and out into the Chesapeake.  My son derisively calls the whole thing "Sailing camp for old folks".

About all I can do when I get home is stumble into my hammock and read some of the rules.  There's an "action shot" of me contemplating the rules.  I think I managed to stay awake for at least 5 minutes after the picture was taken.  I'm becoming very excited about the game and there seems to be a lot of buzz building about it in our odd little community


Here are some links to some early reviews: All Quiet on the Martian Front Test Paints 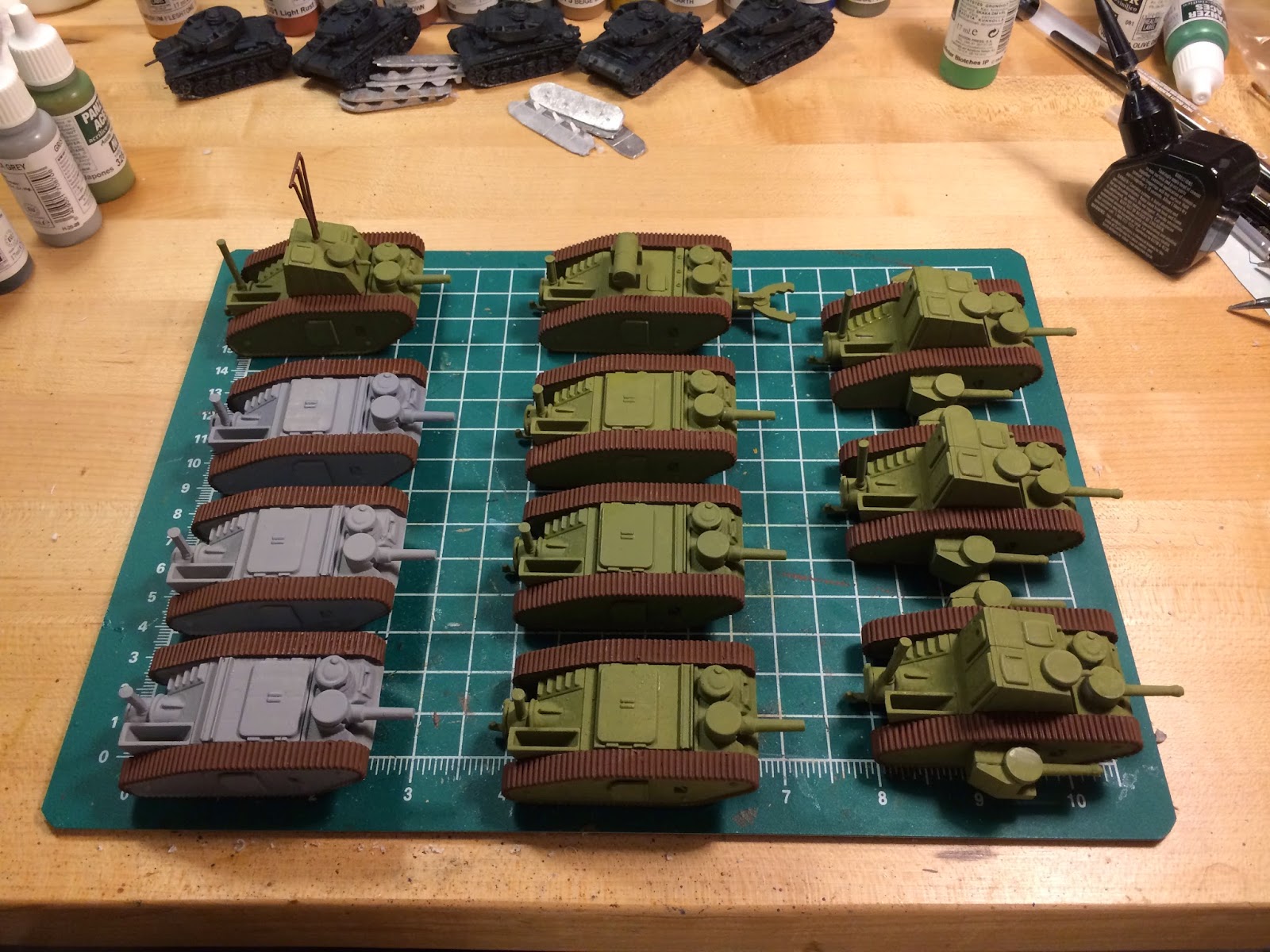 I just received my Kickstarter package for "All Quiet on the Martian Front" (AQMF) and have been busy assembling a painting my US steam tanks.  Since I live about a mile from the producer of the game, I've also snagged some pro type parts for a clamp and a command tank (upper left and upper center).

The photo shows my tanks after a initial paint but they still need to be stained and detailed but it's a good start.

Overall the plastic tanks went together superbly and are very easy to paint.  The three grey ones on the left will be part of a Louisiana State Guard Unit.  One of the things I really like about AQMF is there is a lot more artistic freedom in creating units and I'm looking forward to showing a bit more than the usual creativity.

The guys over at WWPD's scifi game site, Outpost Zero are also doing some work on AQMF - their first article is on the Tripods

Yesterday, Sean and I went to Annapolis to watch the Blue Angels show, which is part of the commissioning ceremonies at the US Naval Academy.   This show marks the Blue Angels return to the graduation festivities after a four year absence due to a training stand-down and then the foolishness associated with the sequestor.  Please excuse the quality of the video as I was using my I-phone and it's a good thing I don't make my living from my video taking skills.  I was only able to figure out how to upload a short video, but it gives you an idea of what the show was like and how fast these aircraft are moving.  Amazing and inspiring stuff.

Some may question the cost of staging such a show.  After seeing one of their shows I doubt you'll find a better recruiting tool!

Graduation week at the Academy is yet another reason why the Chesapeake Bay area is one of the greatest places to live.  Tonight I'll be taking Sean and MB to dinner in Annapolis which can be very expensive as there's an un-official rule that grads and their parents don't pay for their meals so other patrons chip in.  Money well spent if you ask me.
Posted by jmilesr at 8:17 AM No comments: 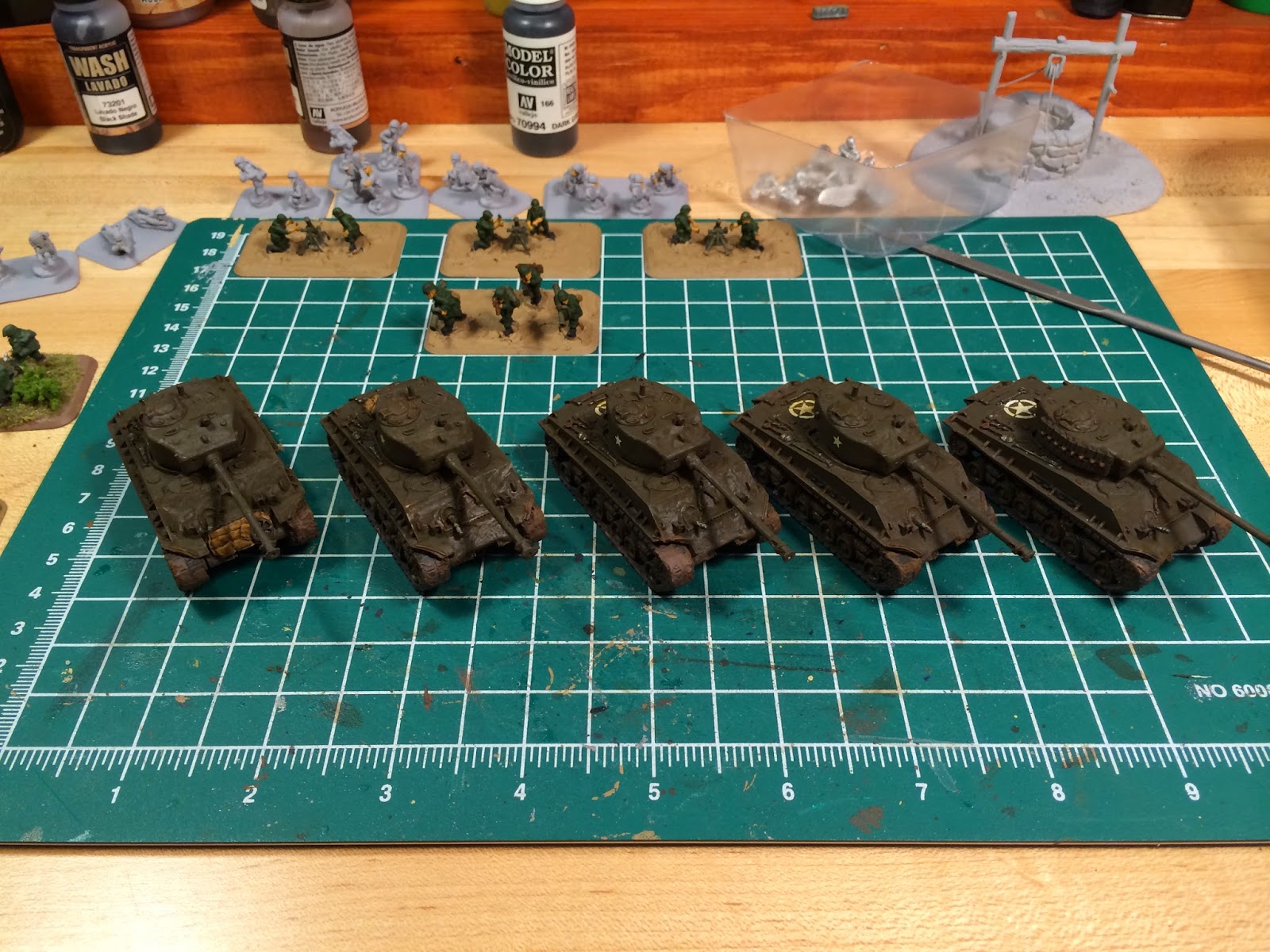 A platoon of 5 15mm scaled Sherman "Easy 8's" has just rolled off my painting workbench to join the American arsenal for Flames of War.  These models are from the Battlefront platoon box and were both easy to assemble and paint. 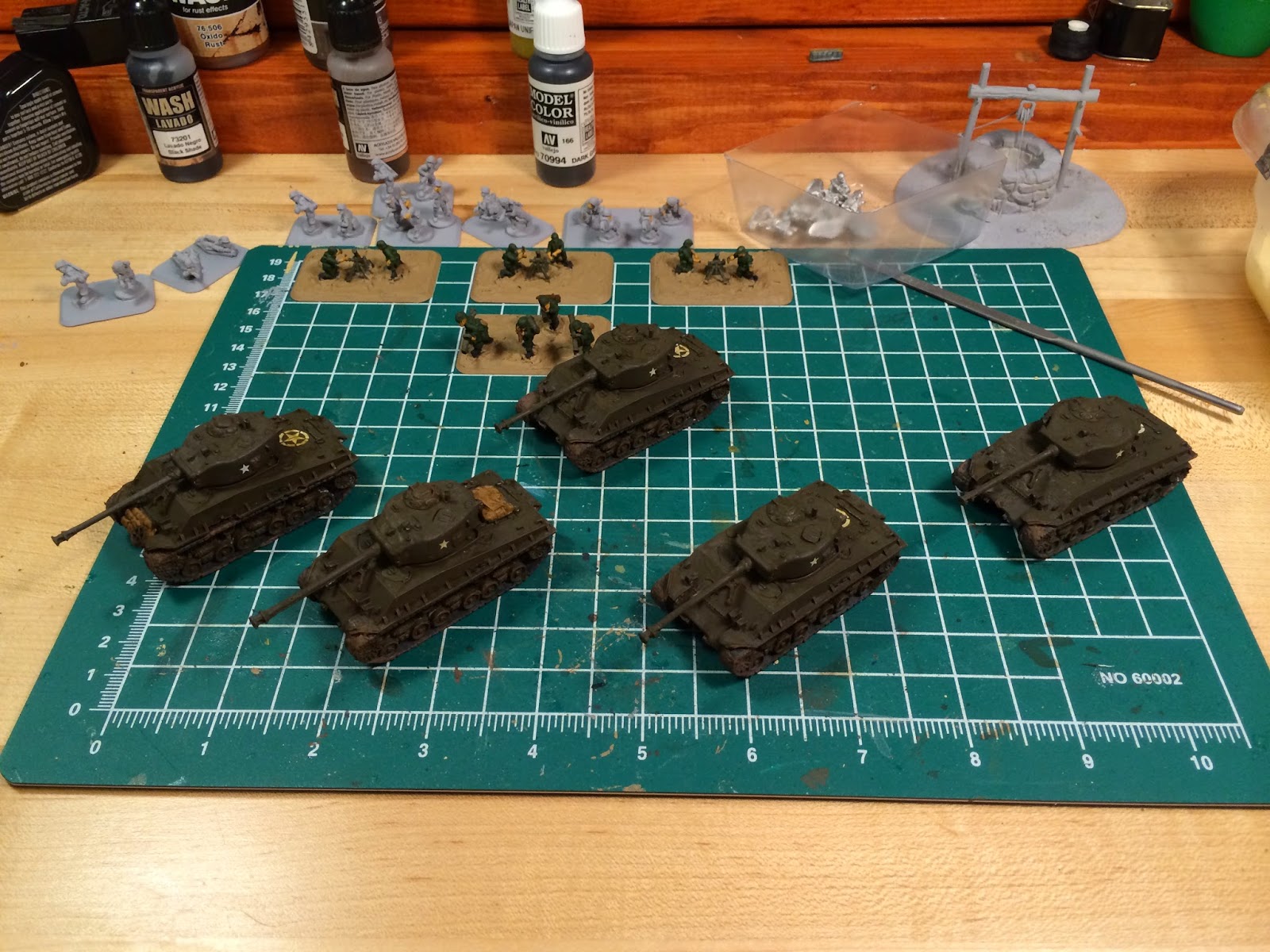 As a modeler, the Sherman and all it's variants has proven to be my favorite model to build/paint.  Including these guys my force now has 22 painted Shermans.  Of course having that many Sherman means one does need to have lots a wreck markers as their survivability on the table top is a bit iffy..... 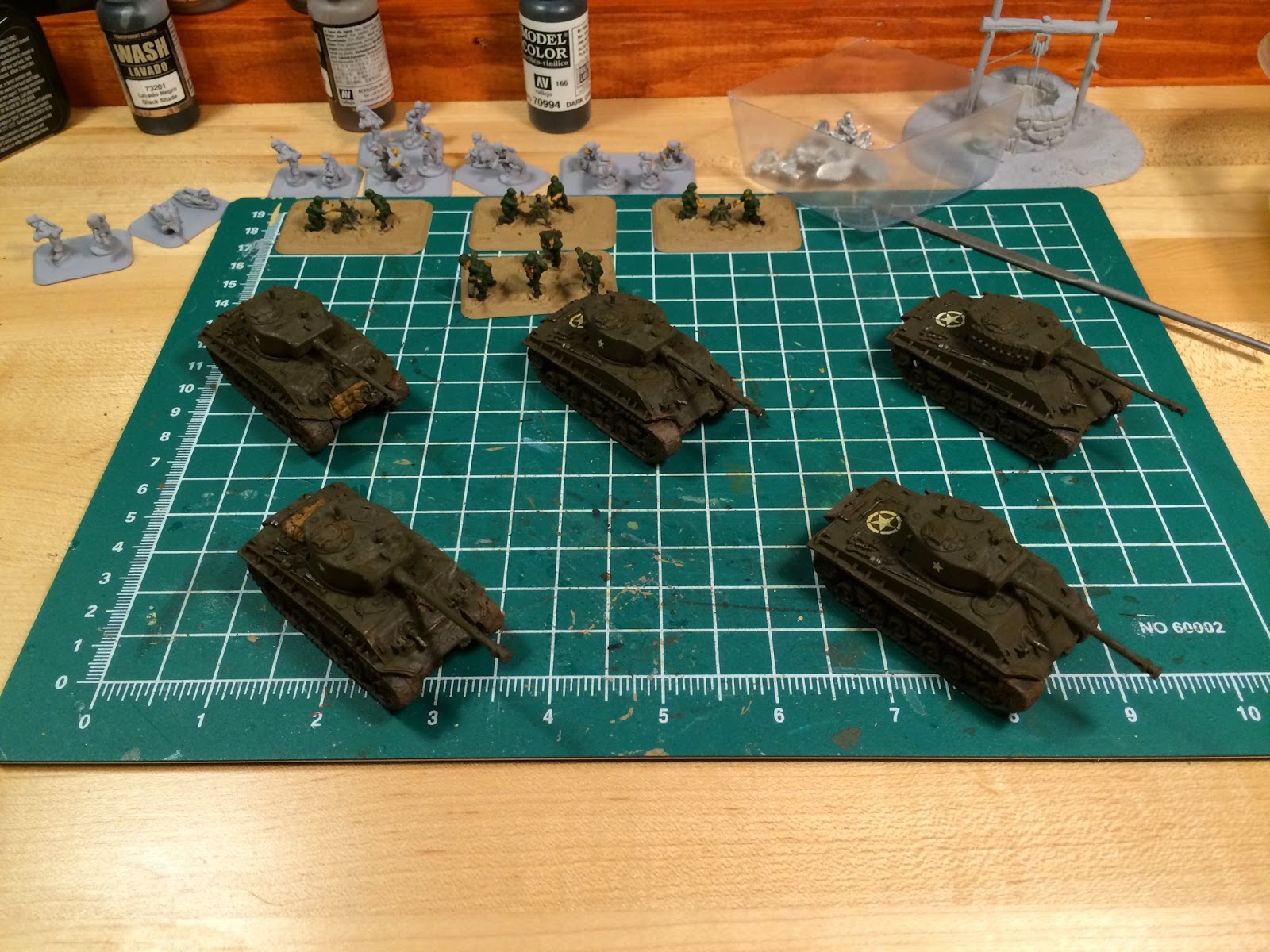 Next up for FOW will be some panzer III's and Mid War support for my Germans but I need to get them finished quick as, drumroll please....

The kick starters are shipping and I may even have a few of the plastic sprues in my greed little hands now.  There are benefits to living only a few miles from the galactic headquarters of Architects of War and being a play tester.  I may even build a few tripods this weekend!!!!
Posted by jmilesr at 6:30 AM 3 comments: 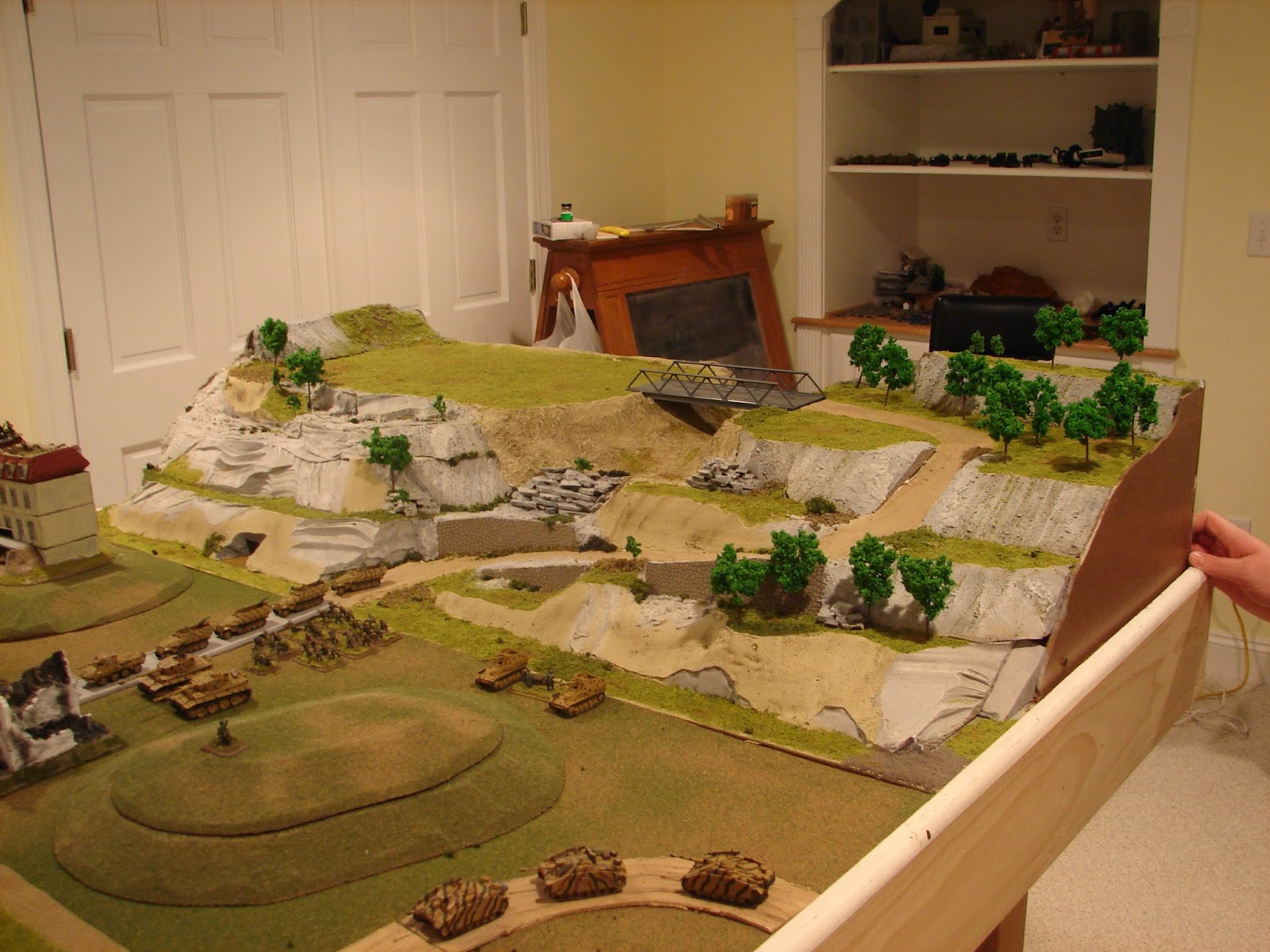 I've received several requests for more info on the "Monte Casino" terrain section I built way back in 2010 so here are some more pictures.

The following links are older blog posts that track the building of the 2x4 foot section: 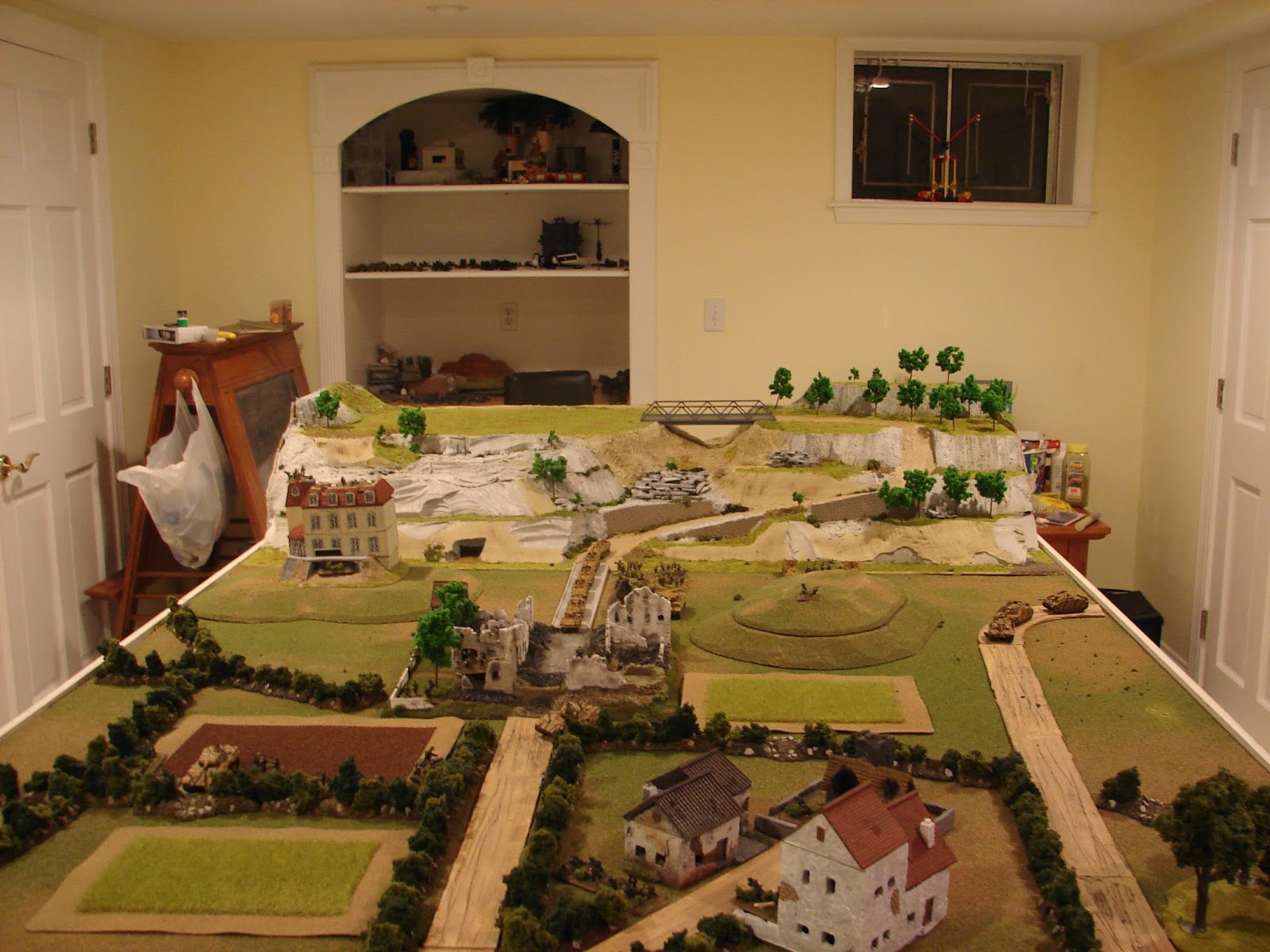 I should really refresh this terrain as my terrain skills have improved a bit and I've also gained a better grasp of "engineering terrain" that facilitates game play.  Not all terrain that looks good is easy to play on.  That might be the basis for a series of blog posts. 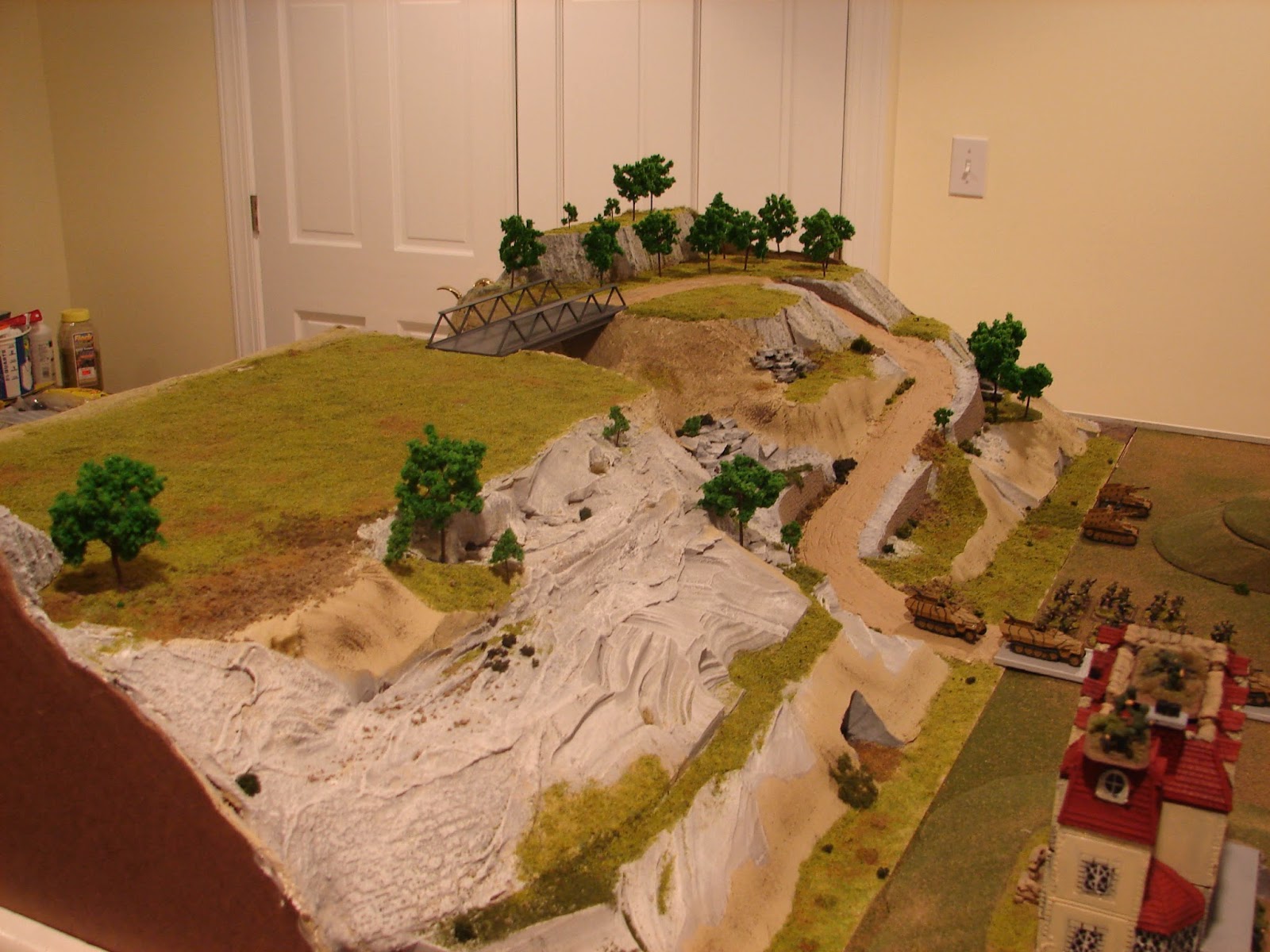 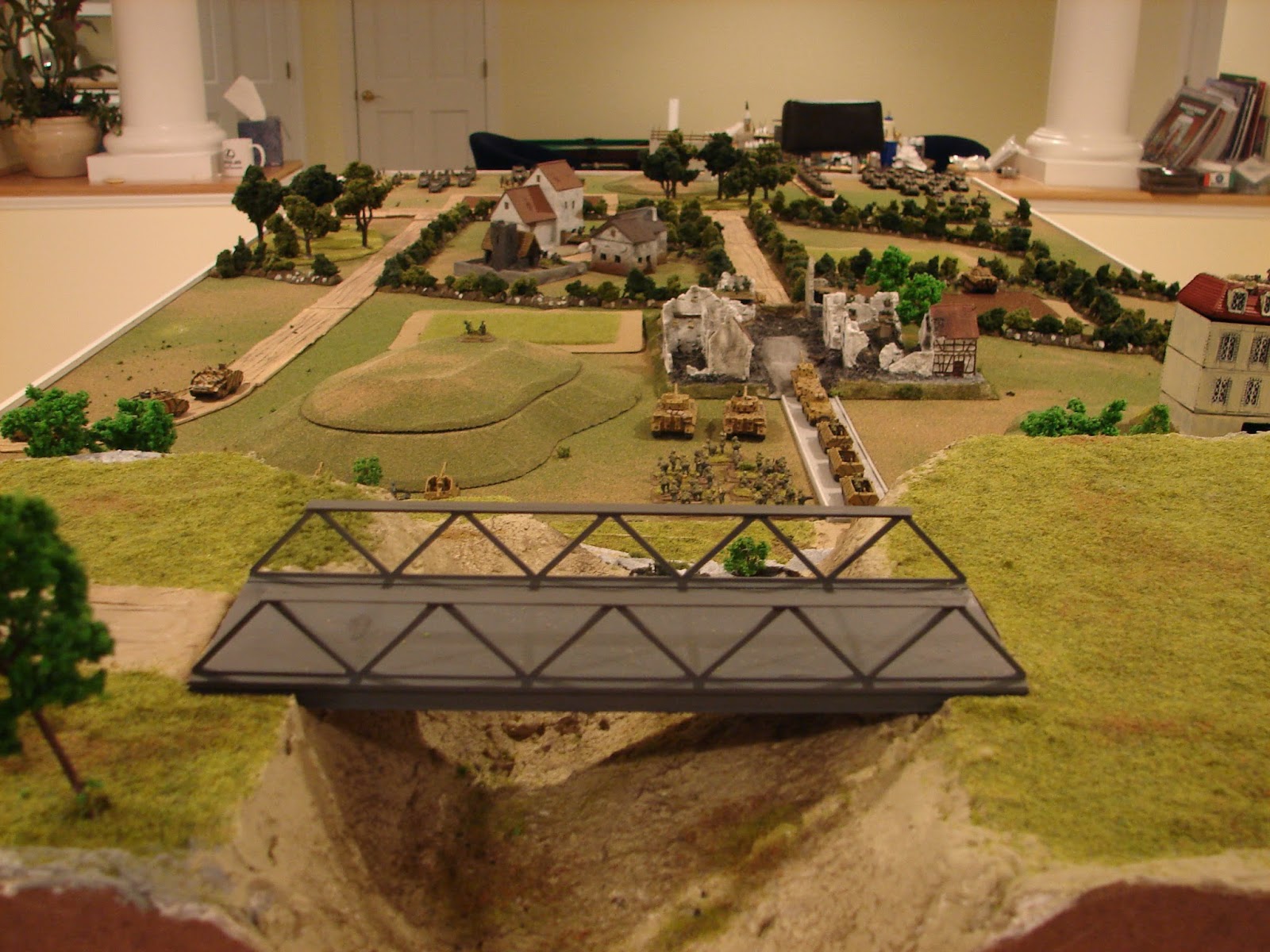 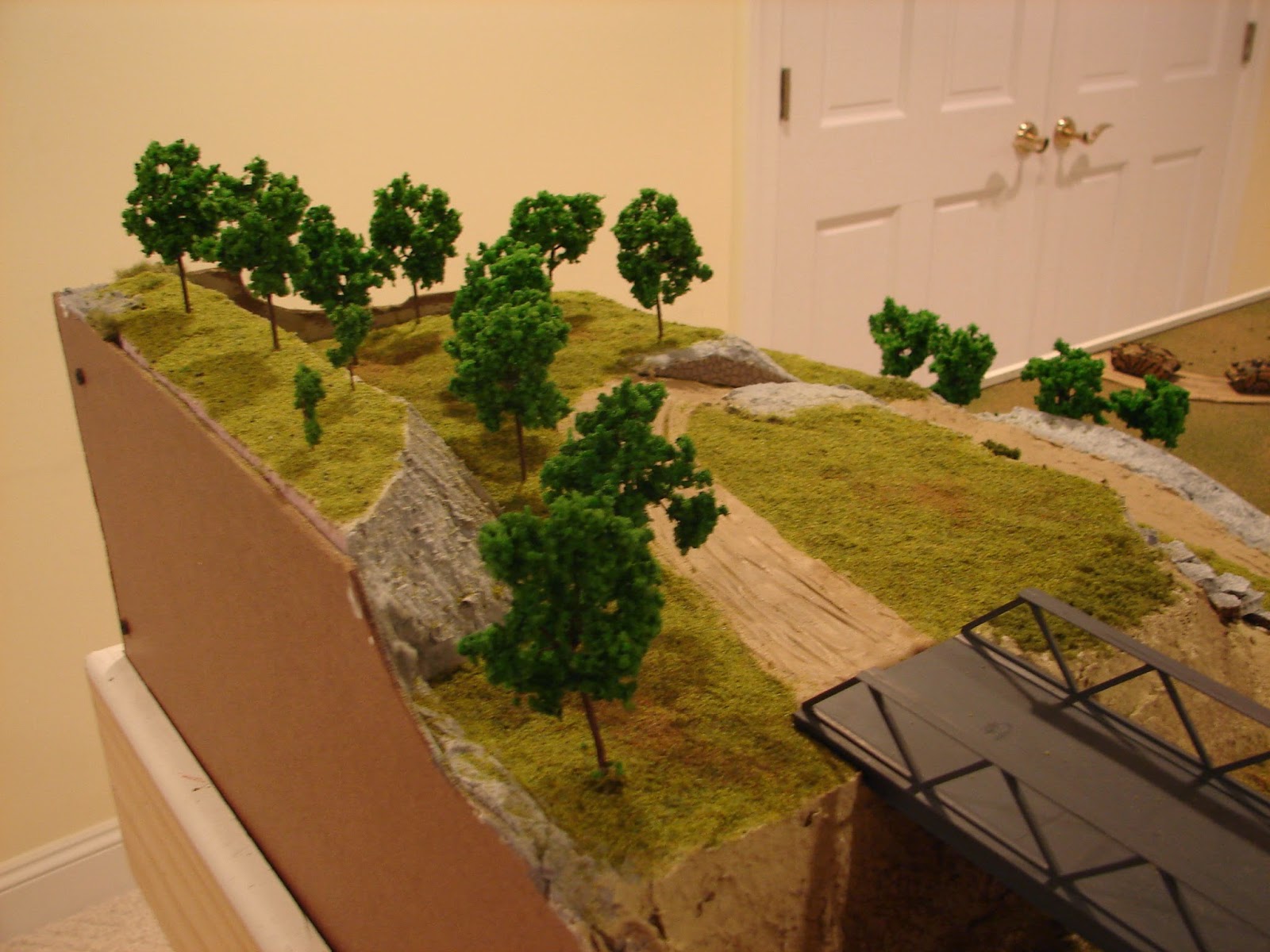 Yesterday I drove up to Pittsburgh to retrieve my son, Sean, from college.  He's completed his freshman year at Carnegie-Mellon.  It will be great to have him home for a while, although I expect our grocery bill will increase significantly.

The pick up process took a good bit longer than expected as my enterprising son had cooked up a scheme where he went a rented a large climate controlled storage locker and the then "sub-let" space in the locker to other students for summer storage.  It all was working great until demand spiked yesterday from panicked kids who didn't think about packing until the day they had to vacate the dorms.  Both my vehicle and myself were pressed into service as movers so it was a very busy day.  I look forward to teaching Sean a lesson about wage negotiation and management of older workers...

Sean has two of his friends come back with him (Colin and Vivek) and they be leaving tomorrow on a roller coaster tour up the east coast.  They all took a roller coaster design class last semester and have made arrangements with the engineers at several parks to get a "behind the scenes" tour of the coasters.  Unfortunately, I am not allowed to go on the trip.  Apparently, dragging along ones father on your first college "road trip" is viewed as less than desirable.  I can't understand why.

We've got Sean home through the month of June and then he returns to CMU to take some summer school courses (3d Calculus and Proofs).  I'm sure all of you remember fondly your summer dreams of taking higher level mathematics classes in July.
Posted by jmilesr at 7:54 AM 1 comment:

I-95 Flames of War Italy Tournament 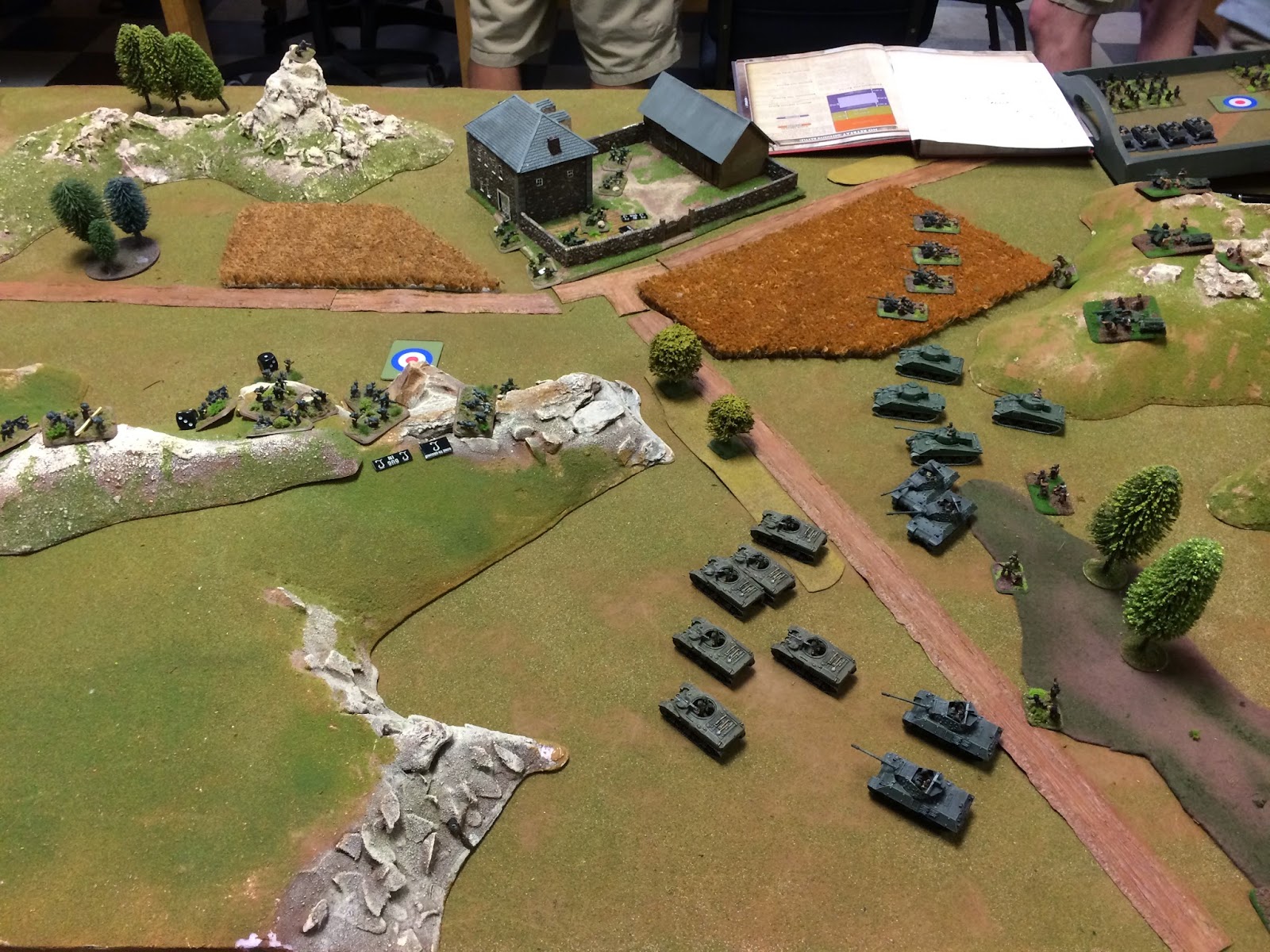 Yesterday (5/10), the I-95 gamers held a Flames of War (FOW) Italy themed tournament at a local game store, the "Game Vault" in Fredericksburg, VA. I made the 2 hour drive to participate in my first FOW tournament and enjoyed myself immensely .  My first game was an ignoble 6-1 defeat in two turns to Bob E's Mechanized Gurka force.  Since this was my first game, I let Bob pick the scenario and he choose "No Retreat" and elected to use the "Night Attack" British special rule.  Well if one is going to learn to swim, might as well jump off in the deep end of the pool....

The fist picture shows the setup after the end of Bob's first turn.  Since it's still "night" I can't shoot at anything.  I was running a German parachute infantry company during the tournament, which was a good choice as it's a bit forgiving to bone headed moves (which I provided plenty of). 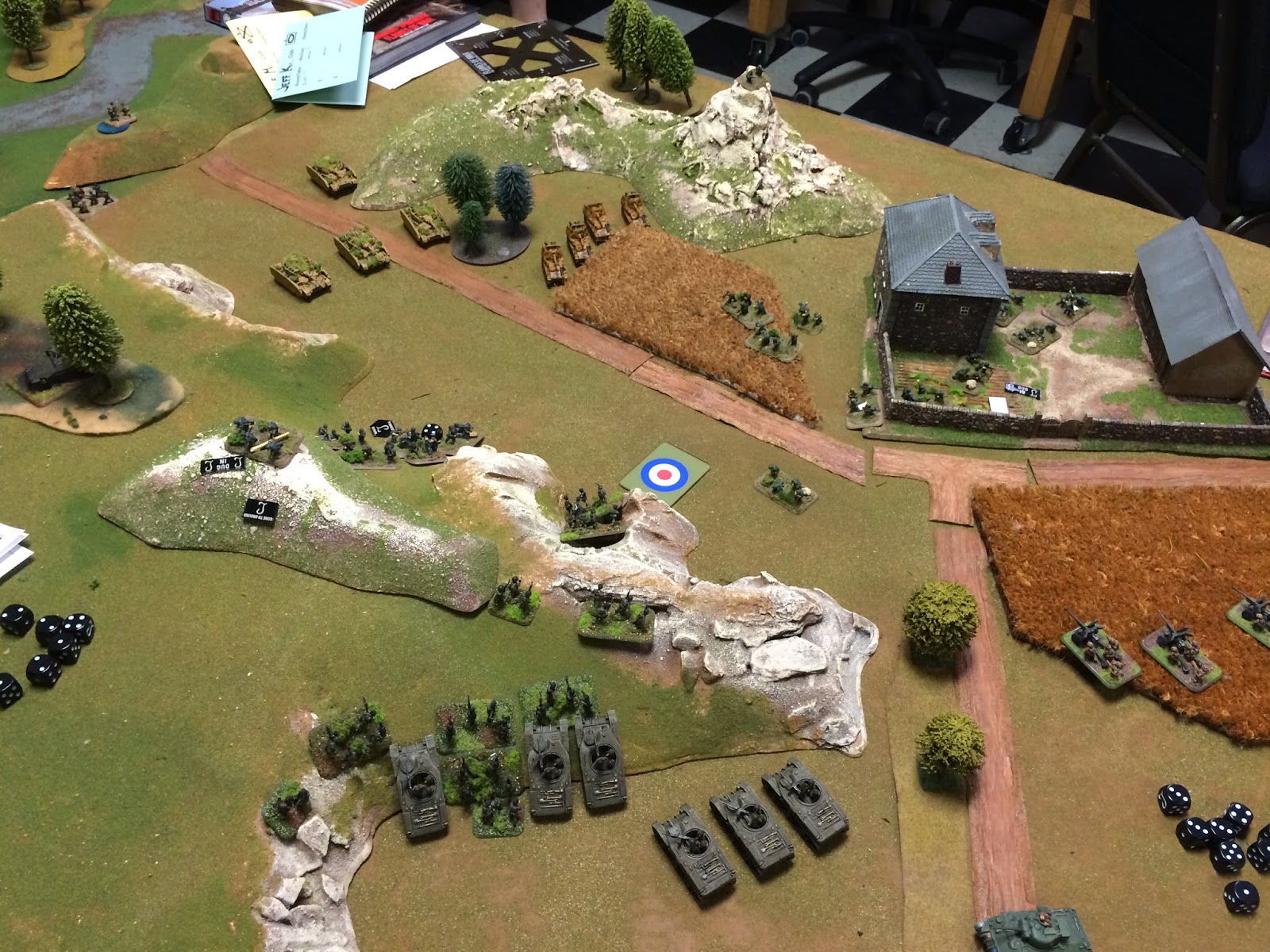 At the end of the second turn, Bob's Gurka's had pushed my paras off the objective and I was too slow in moving the other platoon over to support.  With a failed "unpin" roll I couldn't move back to contest the objective and the game was lost!  It was a great learning experience about needing to know your opponents special rules before setting up.  Also, similar to that first minor ding on a new car, it was a bit of a relief to get first loss over with.  Subsequent to the game, I did learn that Bob's list wasn't really legal but had it been so the outcome would be the same.  More importantly, Bob bought me a beer after the tournament so the man can do no wrong. 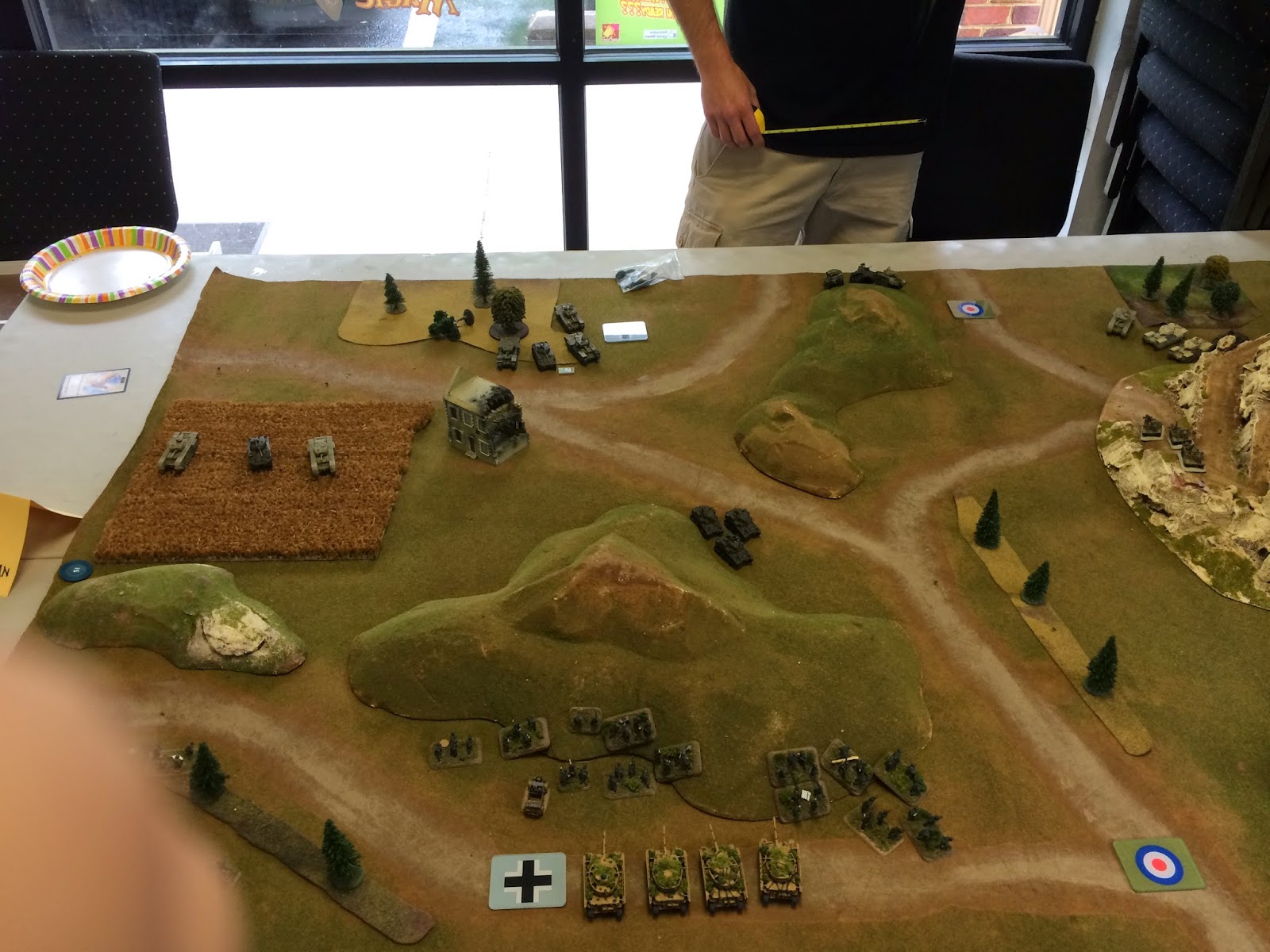 My second game I played "Free of All" against Chris C and his mighty Churchill platoon.  As with all my games at the event, I let my opponent choose the scenario.  This game was much more competitive than my first game.  In the end I still lost, but it was very close at 4-3 and I was in one platoon away from forcing Chris to take a company morale test.  I did learn two things from this game - (i) my tiny support platoons are fragile and need to be held back rather than expose them and give up easy platoons points and (ii) rather than spread fire across multiple enemy platoons its best to concentrate on one to eliminate it before moving on to others. 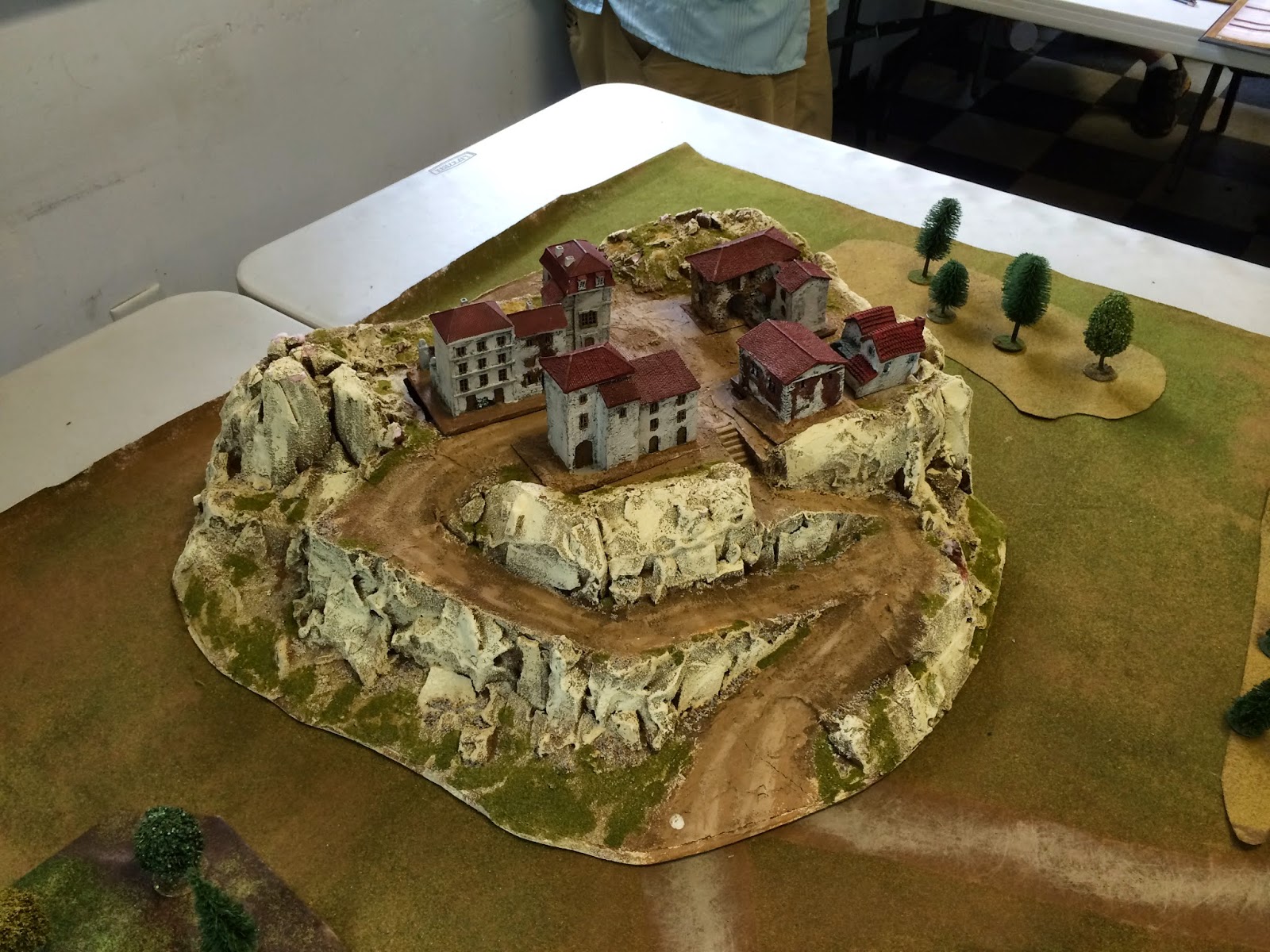 Our board featured a very neat Italian mountain village terrain piece.  No units entered the village during the game but it was a nicely done terrain piece.  All of the tables in the tournament featured superb terrain and I picked up a number of ideas to improve my terrain inventory. 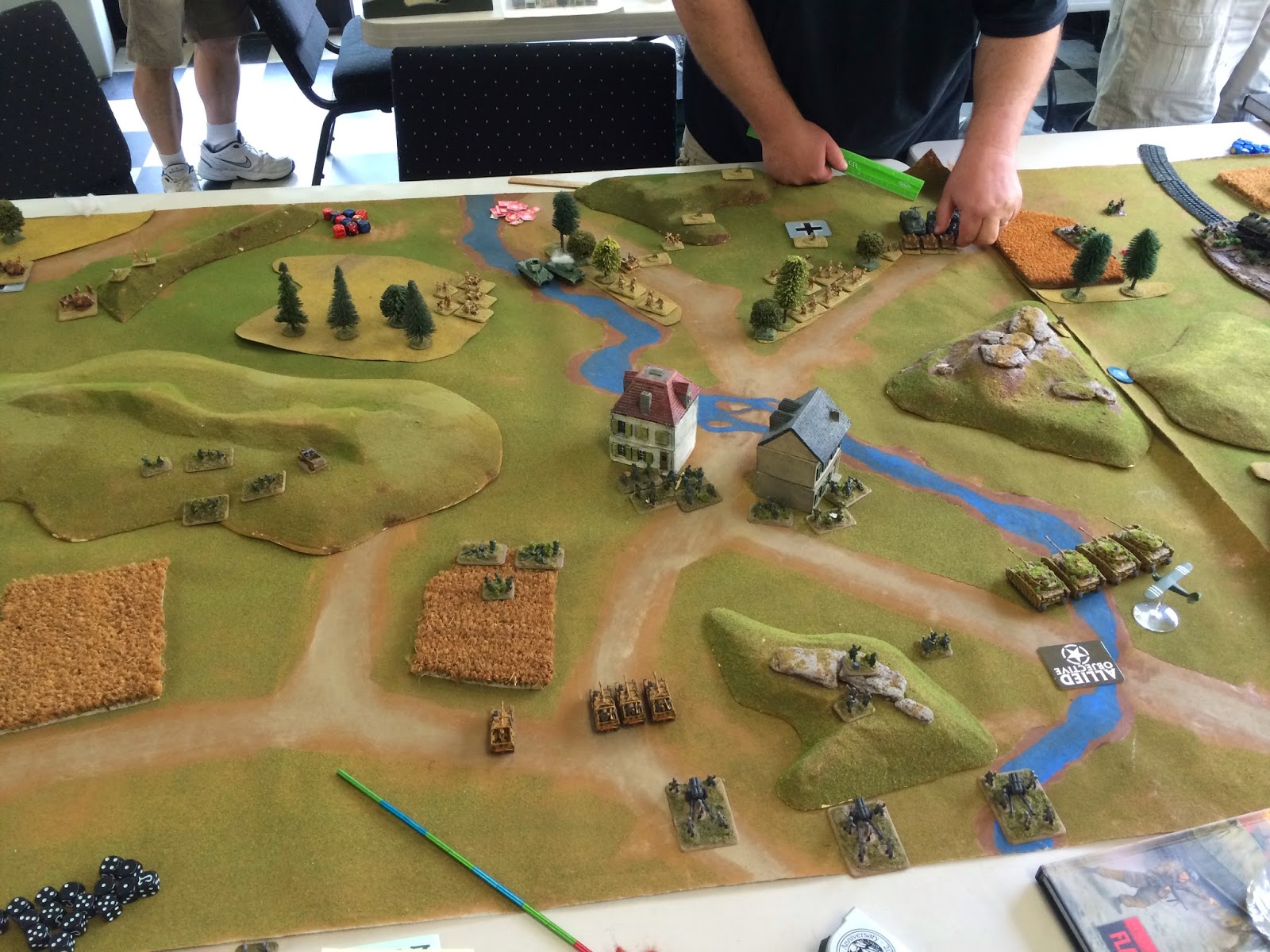 My last game of the tournament was against Paul and his Polish infantry company.  Our forces were almost identical with Paul having a bit more artillery but slightly less armor than me.  He also had the "Wojtek the Bear" special unit which allows his guns to shoot twice.  This game ended up being fought on both flanks with our respective armor forces fighting on the right and... 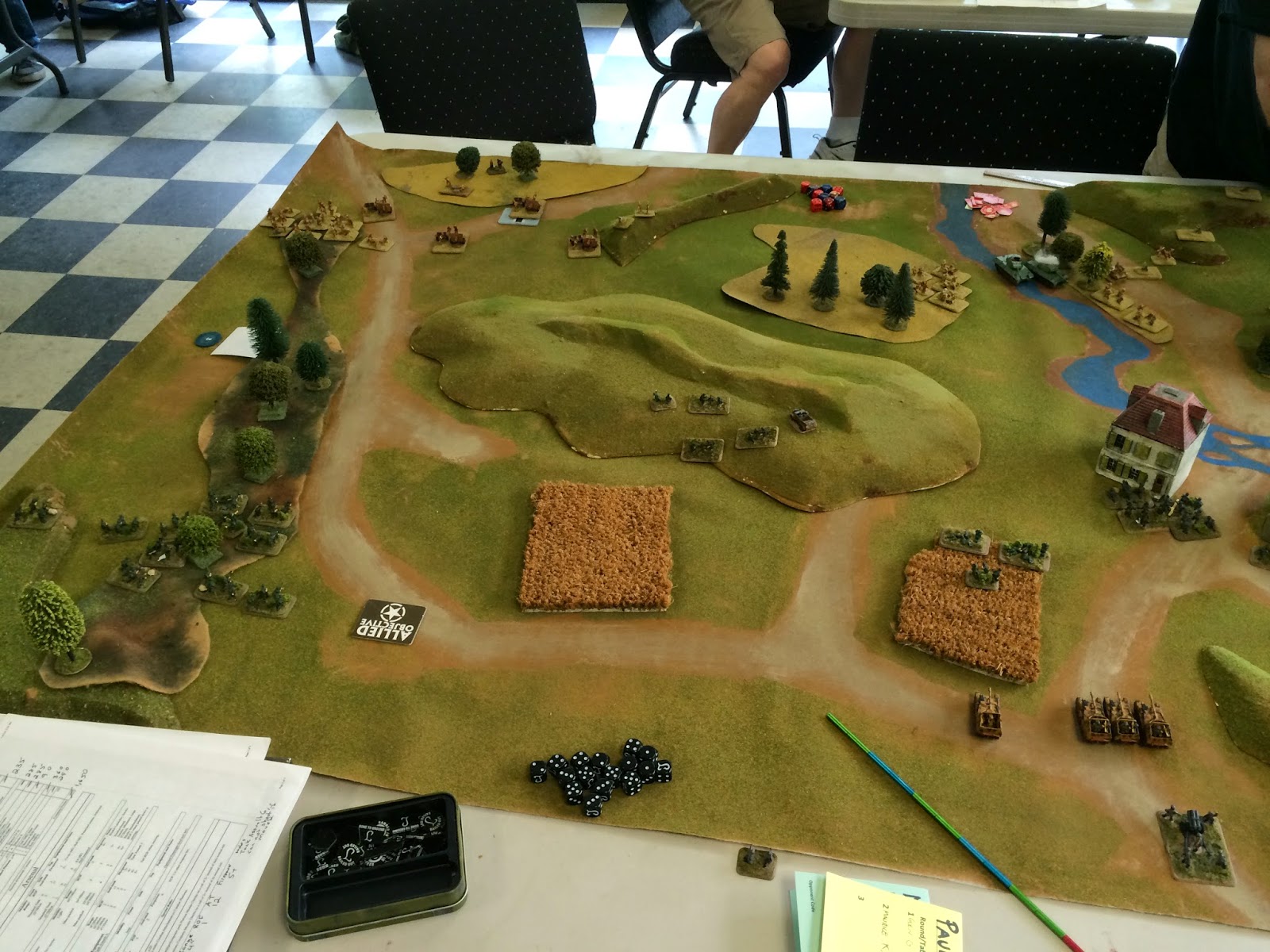 Our infantry on the left.  The dice gods seemed to be on my side and I managed to grind down Paul's forces just a bit faster than he could mine. The key unit in the game was my Panzer IV's who where able to survive an almost constant level of barrages from 25 pounders and kill off Paul's Sherman's, Bren recon and an infantry platoon.  This game provided my lone victory of the day at 4-3. 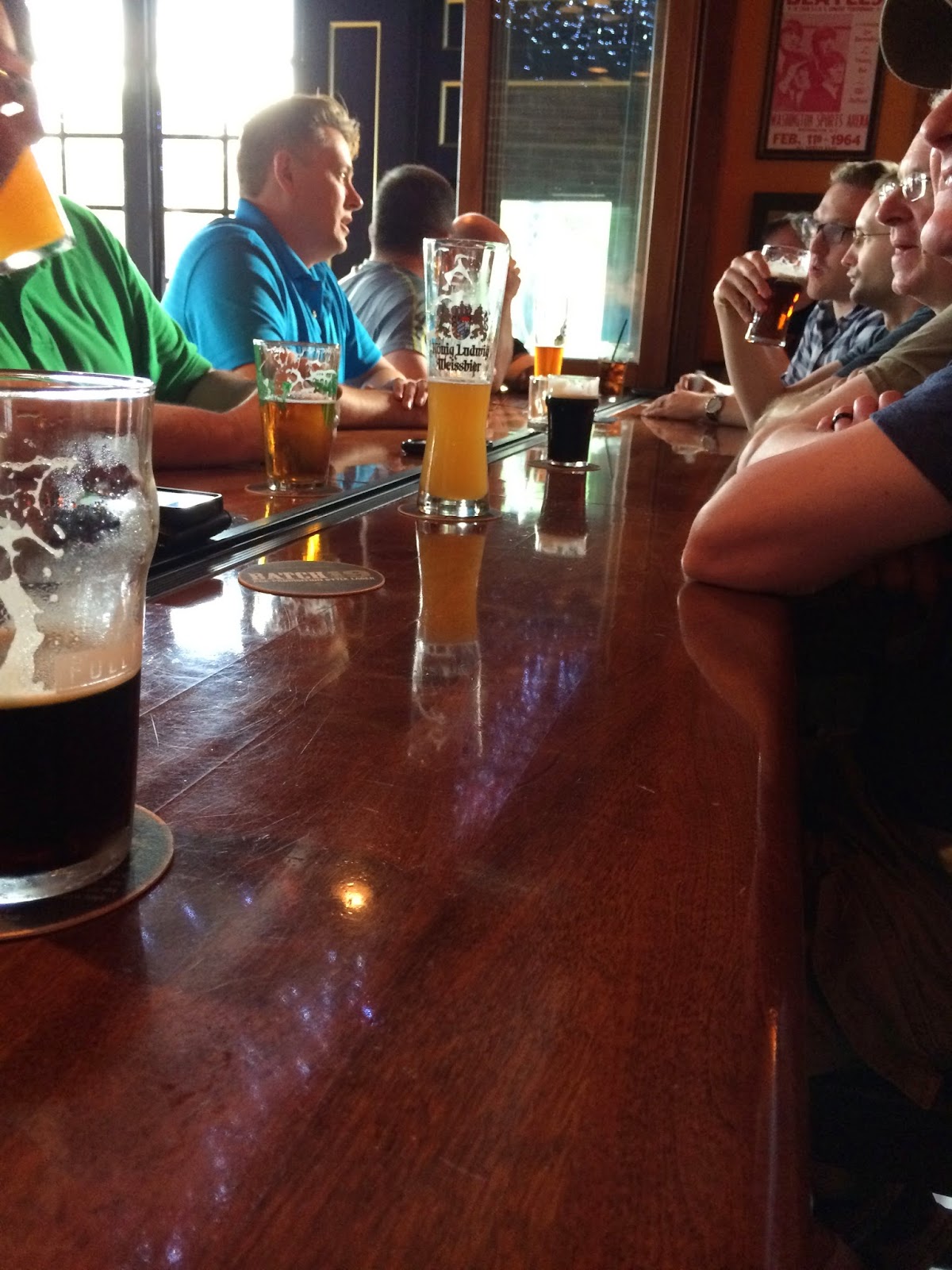 All-in-all, I had a blast and achieved my main objective - not to come in last!  I will definitely be doing more tournaments in the future.  The I-95 guys put on a great show and it's well worth attending.

Of course, lifting metals mini's and throwing handfuls of dice is very tiring work so after the tournament we "redeployed" to a local watering hole to discuss the days events and resupply.  I, ummm, only had a salad to eat.  Really, that's my story and I'm sticking with it.
Posted by jmilesr at 7:08 AM 4 comments:

The WWPD crew is running another multiplayer campaign, which this year's event centered on the Italy Campaign.  I participated in last years Normandy campaign and had a blast so I highly recommend participating.

Here is the link to the campaign website.  This year's event features a much improved user interface that maybe even a Luddite, such as myself, can navigate to easily post battle reports.  It all looks pretty slick and a really good reason to get your FOW stuff back on the table.

This year, I'll be playing on the bad guys side - the Axis

On other Flames of War news this coming Saturday will see me competing in my first FOW non-doubles tournament at the Game Vault in Fredericksburg, VA.  I'm a bit nervous about the event but it should be a lot of fun!