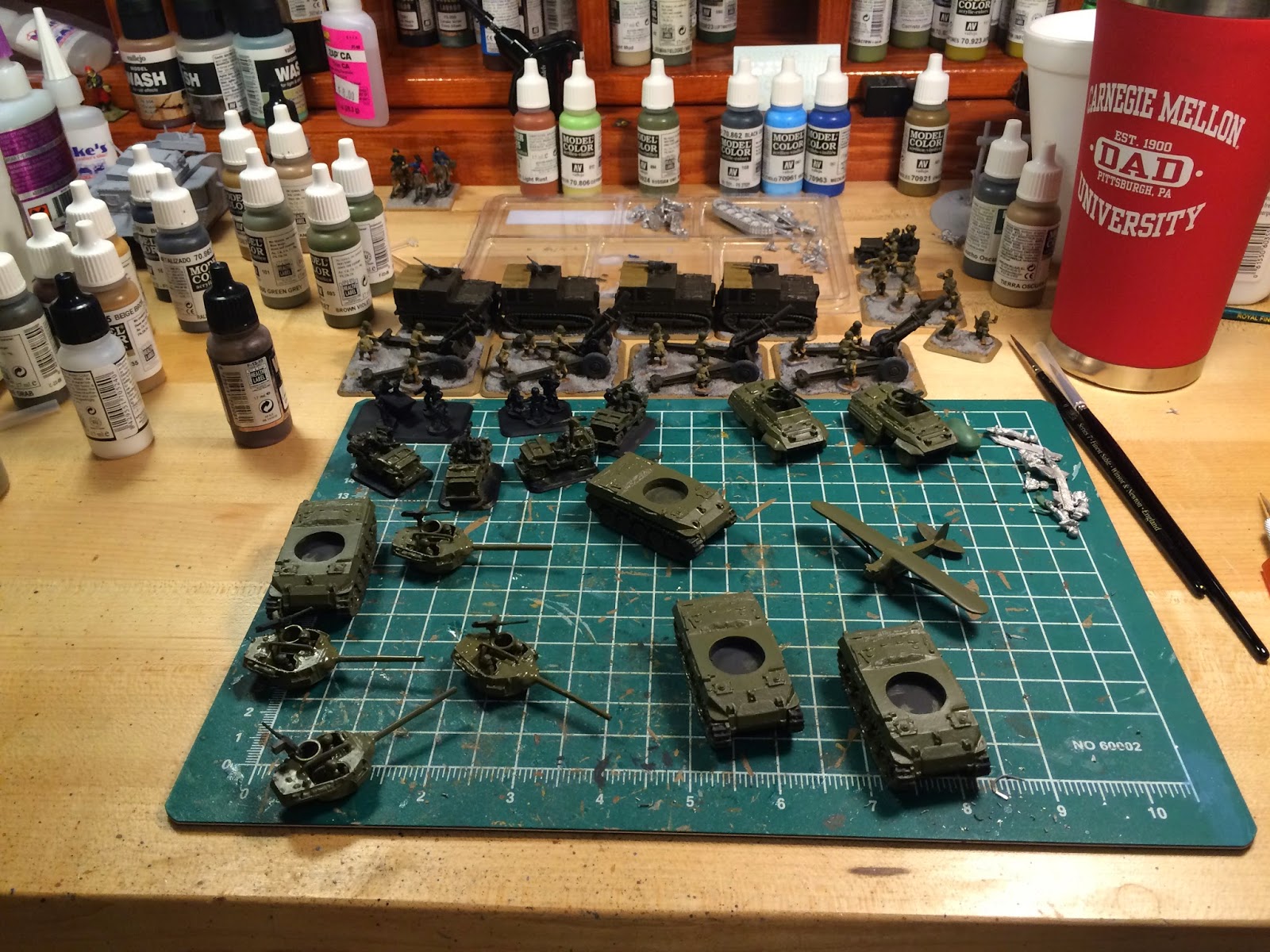 In a bit of a switch from Napoleonic naval mini's, there are a good number of 15mm WW2 figures on the workbench now.  These mini's are needed to flesh out the list I'm planning to run at an upcoming FOW tournament.  When is the tournament you ask?  Oh it's this Saturday so I'm under a bit of a time crunch!

The units that need to be painted include a M-18 tank destroyer platoon (4 M-18's, 2  M-20's and a jeep), an air observer and some misc command/staff teams.  In terms of painting "crunches" it's not the worst and I should have the details painted out tonight.

I do find that these self-inflicted painting crises really do increase my productivity and can re-engerize my approach to the hobby.  It's also good to have a break from 1/1200 sailing ships which are very rewarding to build but very taxing at the same time.

The Essex is Done! 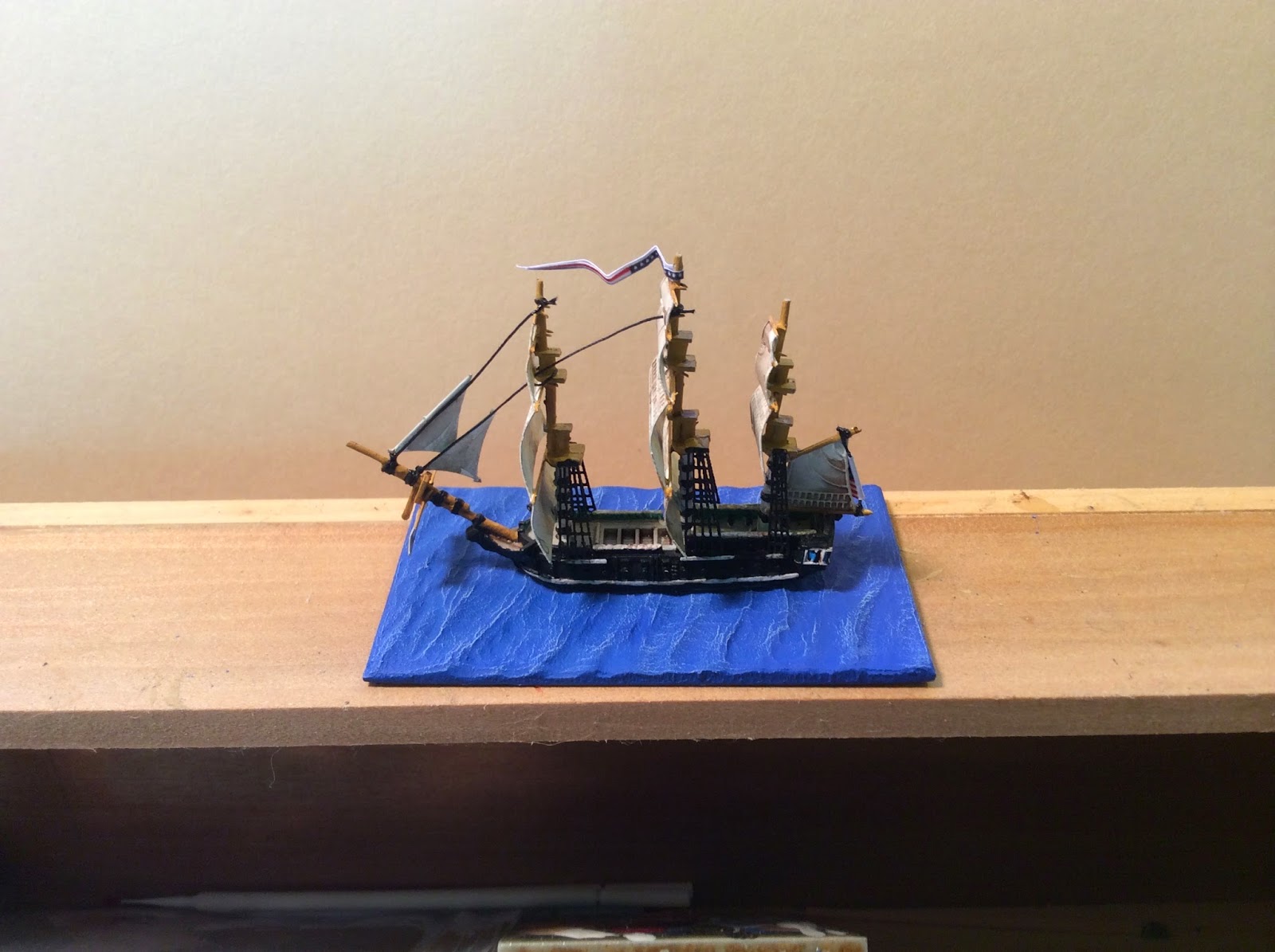 Another frigate has been added to my 1/1200 scale US Fleet - the USS Essex a 38gun ship.  As previously posted, this was yet another Langton model with the brass sails. 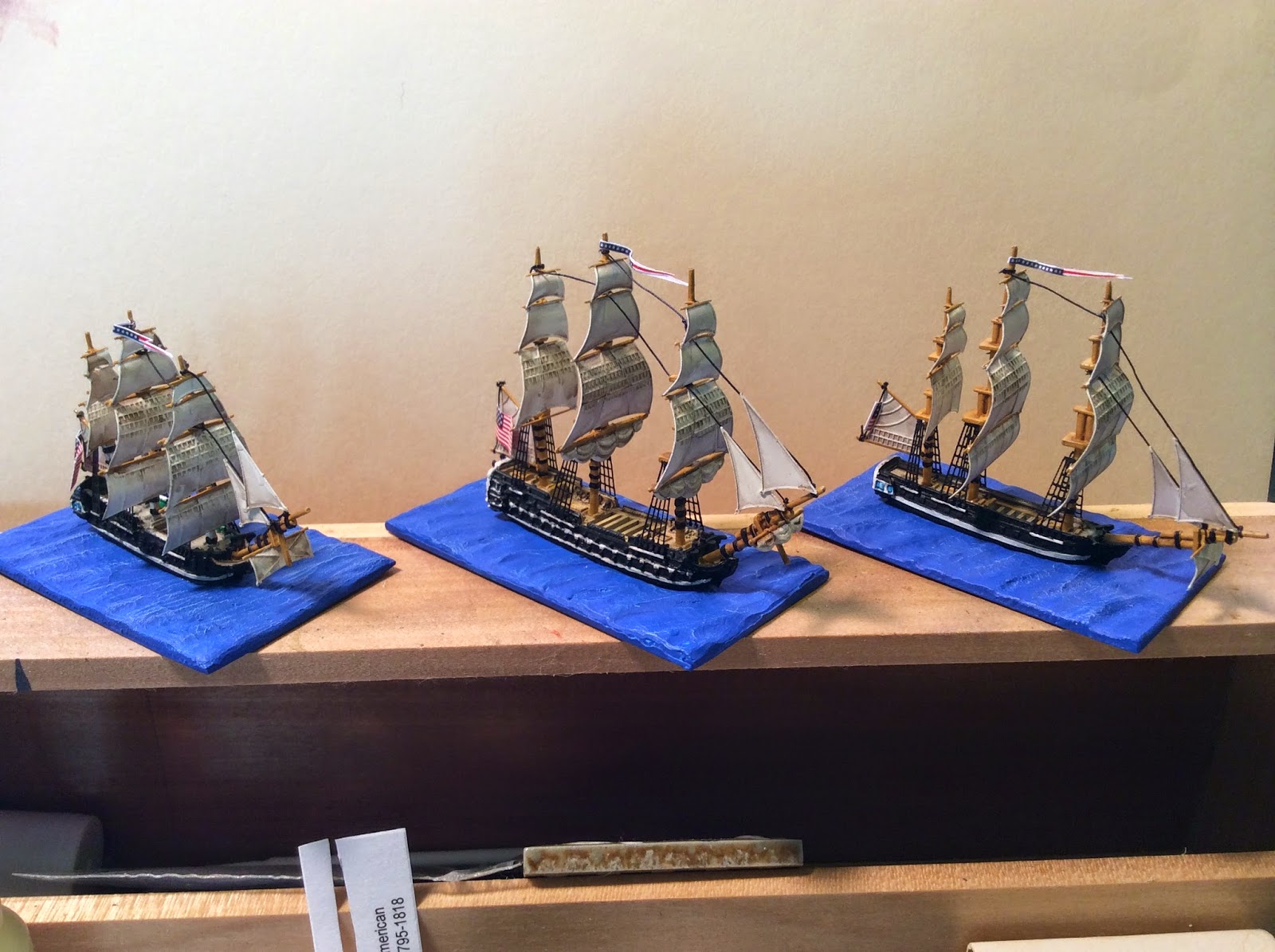 All of the additions to the US fleet, from left to right, the USS Essex (38 guns), the USS Ohio (74 guns) and the USS Congress (44 guns).  All-in-all a nice little addition to my collection. 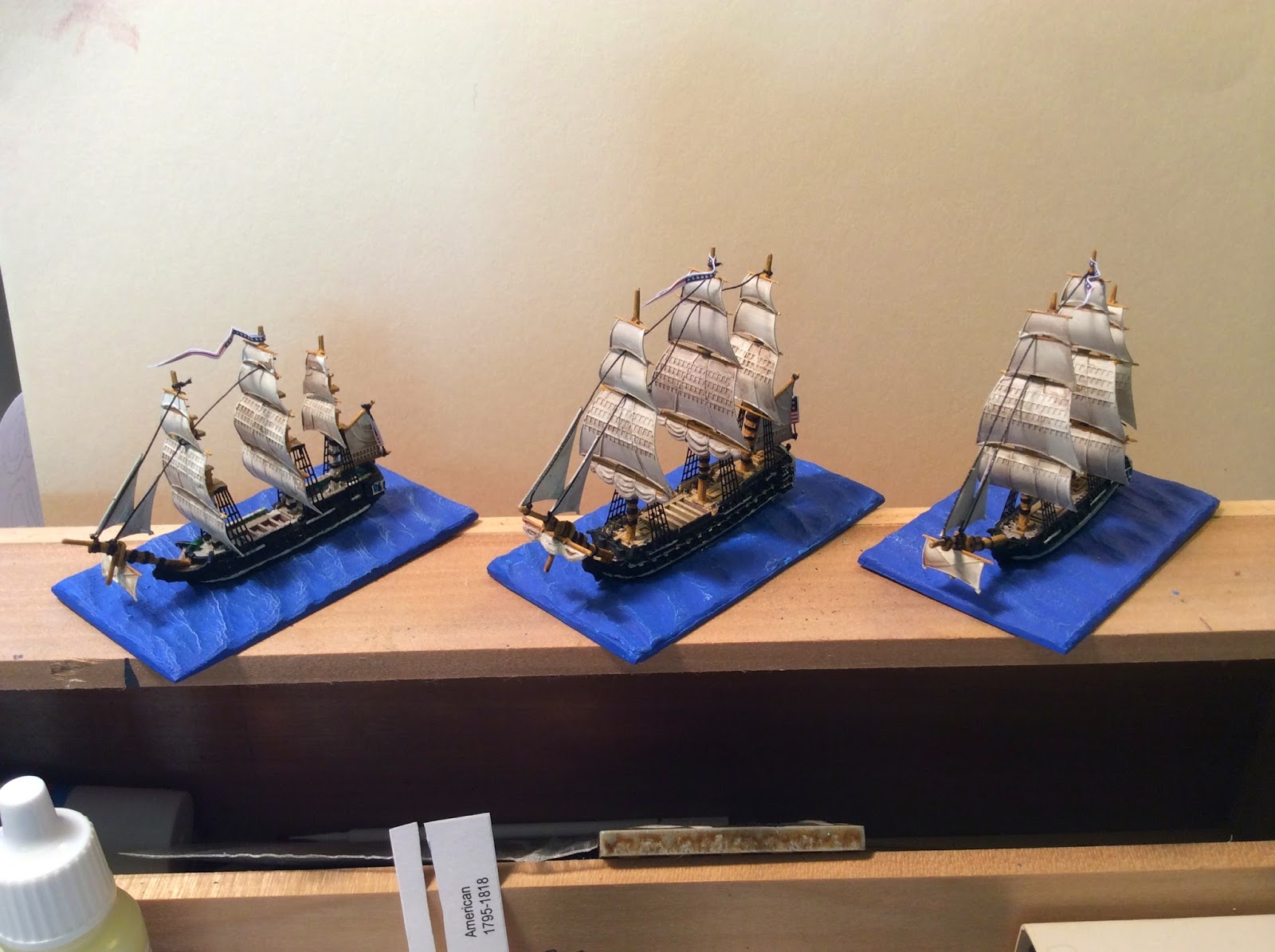 Another shot of the new additions.  I suspect these ships will see some action very soon.
Posted by jmilesr at 2:15 PM 3 comments: 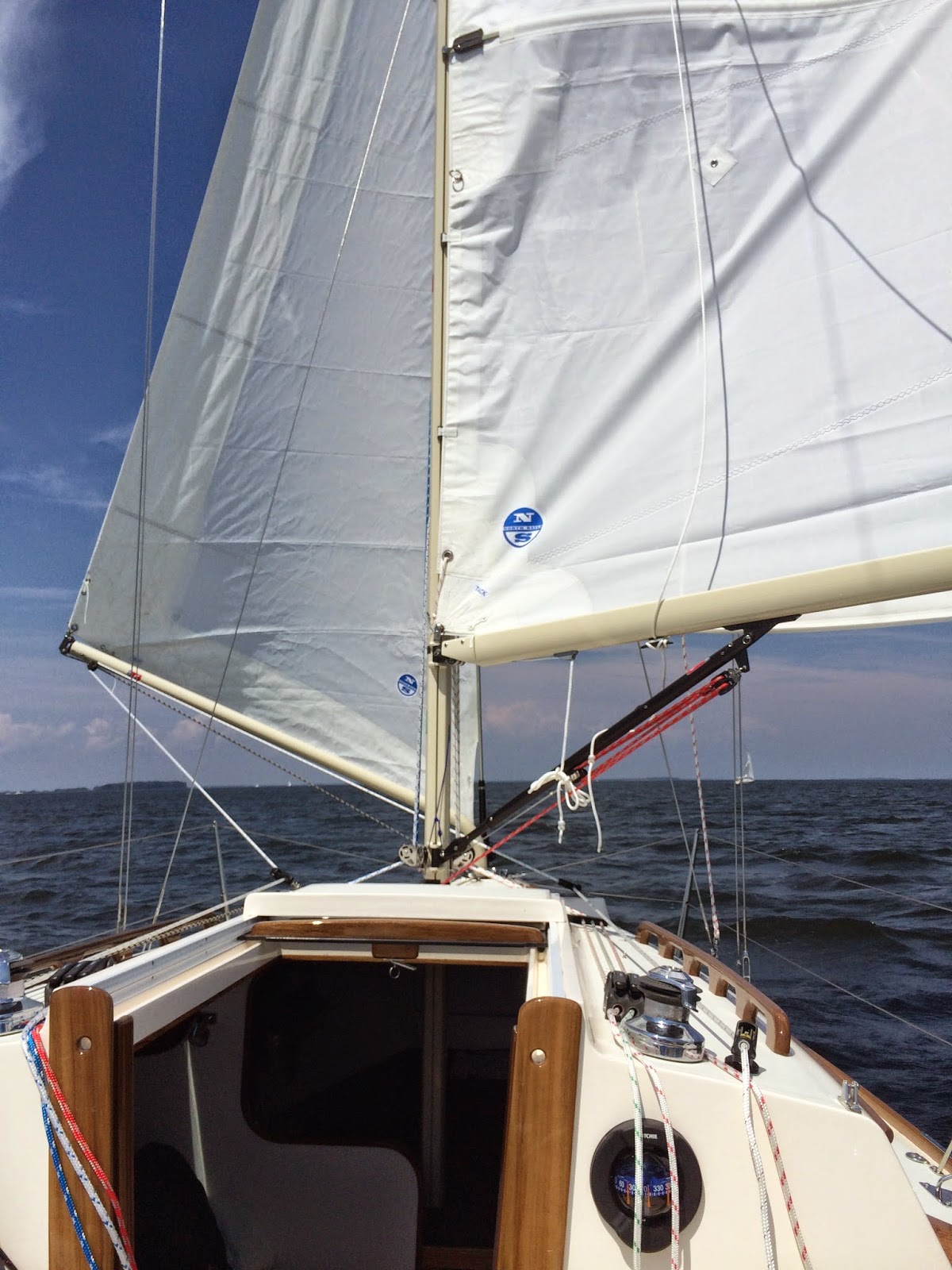 The US Sail Boat Show in Annapolis is now just two weeks away!  It's scheduled to be held on 10/9 - 10/13.  The show is for sailors what a combination of Salute and Historicon would be for gamers.  It's a grand event and I recommend it highly for anyone with even a passing interest in sailing or gin.  Gin?  Well, Hendrick's Gin is a big sponsor and will have their floating bar set up.  I'm sure it is just pure coincidence that packs of hungry sail boat salesman prowl the outskirts of the bar trying to secure potential clients as they leave the "free-gin" area.

My boat, the Bucentuare, will be on display at the show at the Alerion booth (not sure where on the floating docks that will be).  I need to sail across the Bay to Annapolis this weekend and start prepping the boat (i.e cleaning it up, removing personal stuff that might go on walkabout).  After the show, I'll keep her in Annapolis for a few more weeks before dry-docking for the winter.

The sailboat show is really one of my favorite events of the year and I think it will be even more fun as I'm not in the market for a boat.  Unfortunately, there are acres and acres of tents/booths of people who sell stuff to boat owners from fancy navigation electronics to marine head cleaning solutions.  The guys at Alerion have agreed to help me select / install an electronics suite for the Bucentaure in return for me letting them borrow her for the show.

There's also a power boat show the following weekend (10/16-19), if you're one of "those" people.  Being a gentlemen, I really wouldn't know anything about that event but have heard that if one speaks with a New Jersey accent and/or dons a leisure suit with at least 3 linear feet of gold chain there is a discount on the admission.

I still need to find sometime to finish up a few units for the Throcktober event at Huzzah Hobbies next week.
Posted by jmilesr at 7:30 AM 3 comments: 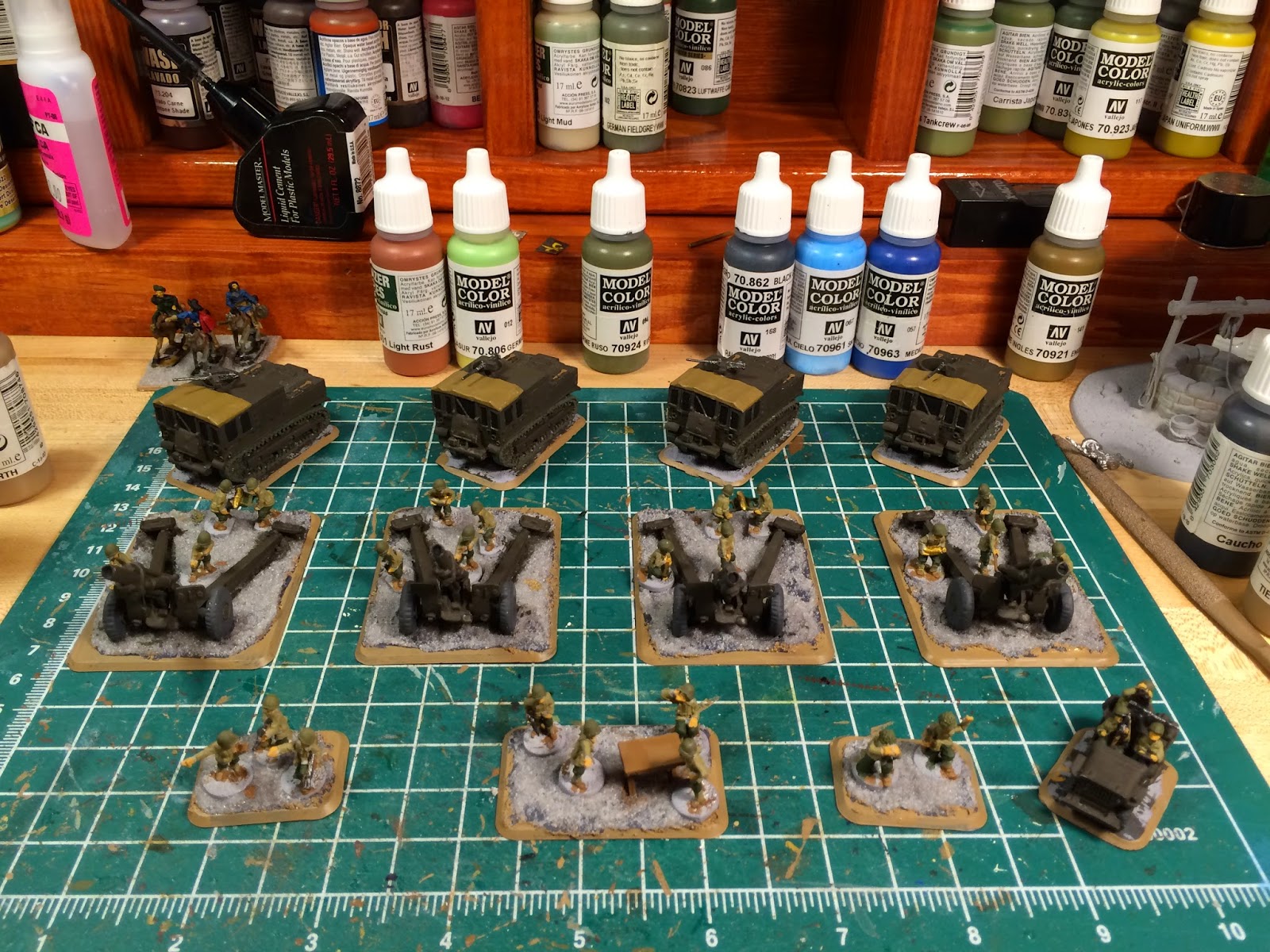 On Sunday, I managed to finish up most of the painting for a 155mm US artillery battery for Flames of War.  I'm rushing to get a US force pulled together for a tournament in a few weeks and this unit should be it.  All that's left is a little shading, some ground scenicing and I've got some big guns ready to take out some big German cats! 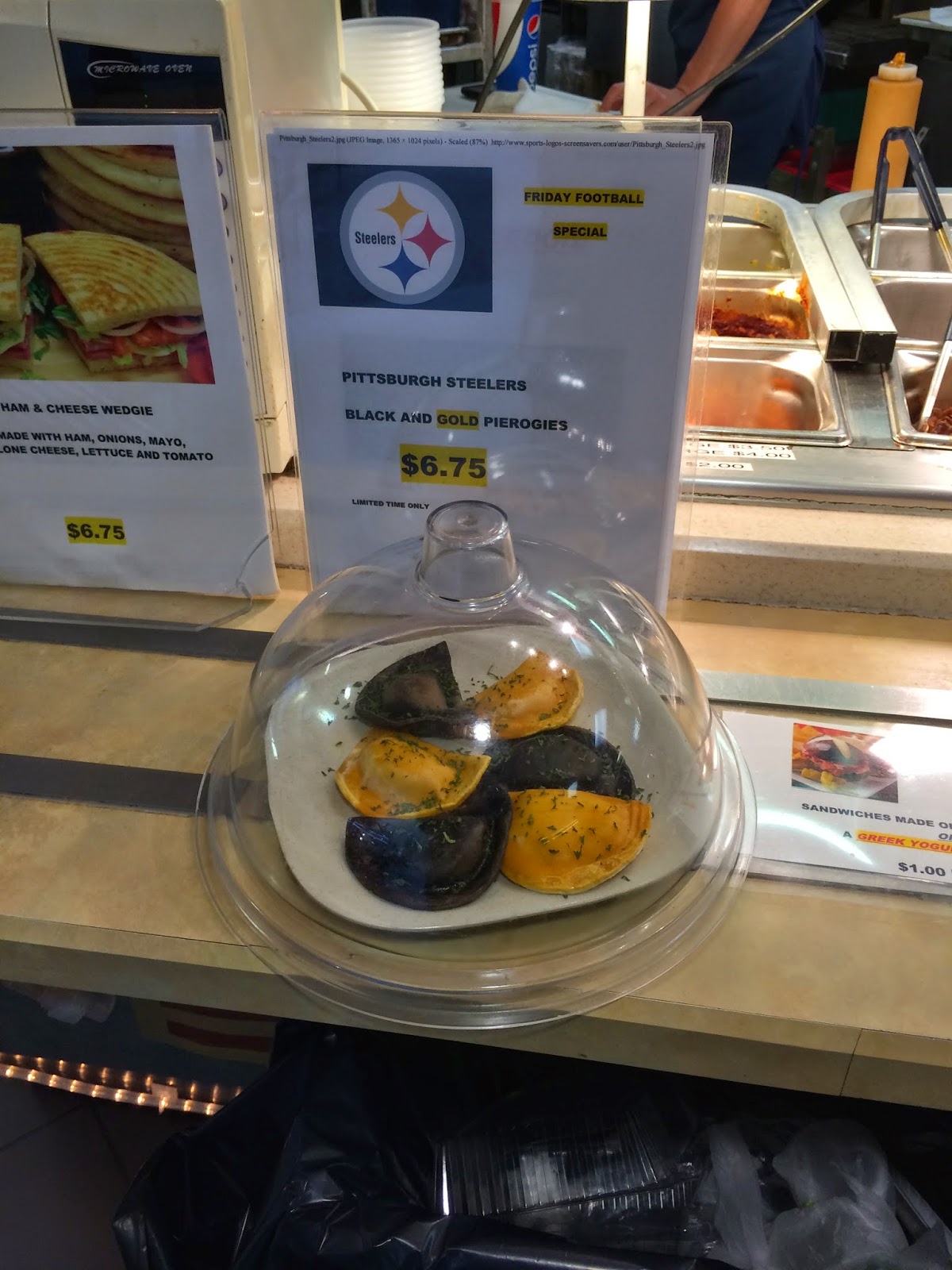 On Monday and Tuesday I was in Pittsburgh for a Board meeting at Carnegie Mellon and encountered "Black and Gold" pierogies for sale at one of the campus dining facilities.  Only in Steeler-Crazy Pittsburgh could one come across such a culinary "delight".
Posted by jmilesr at 8:52 PM 3 comments: 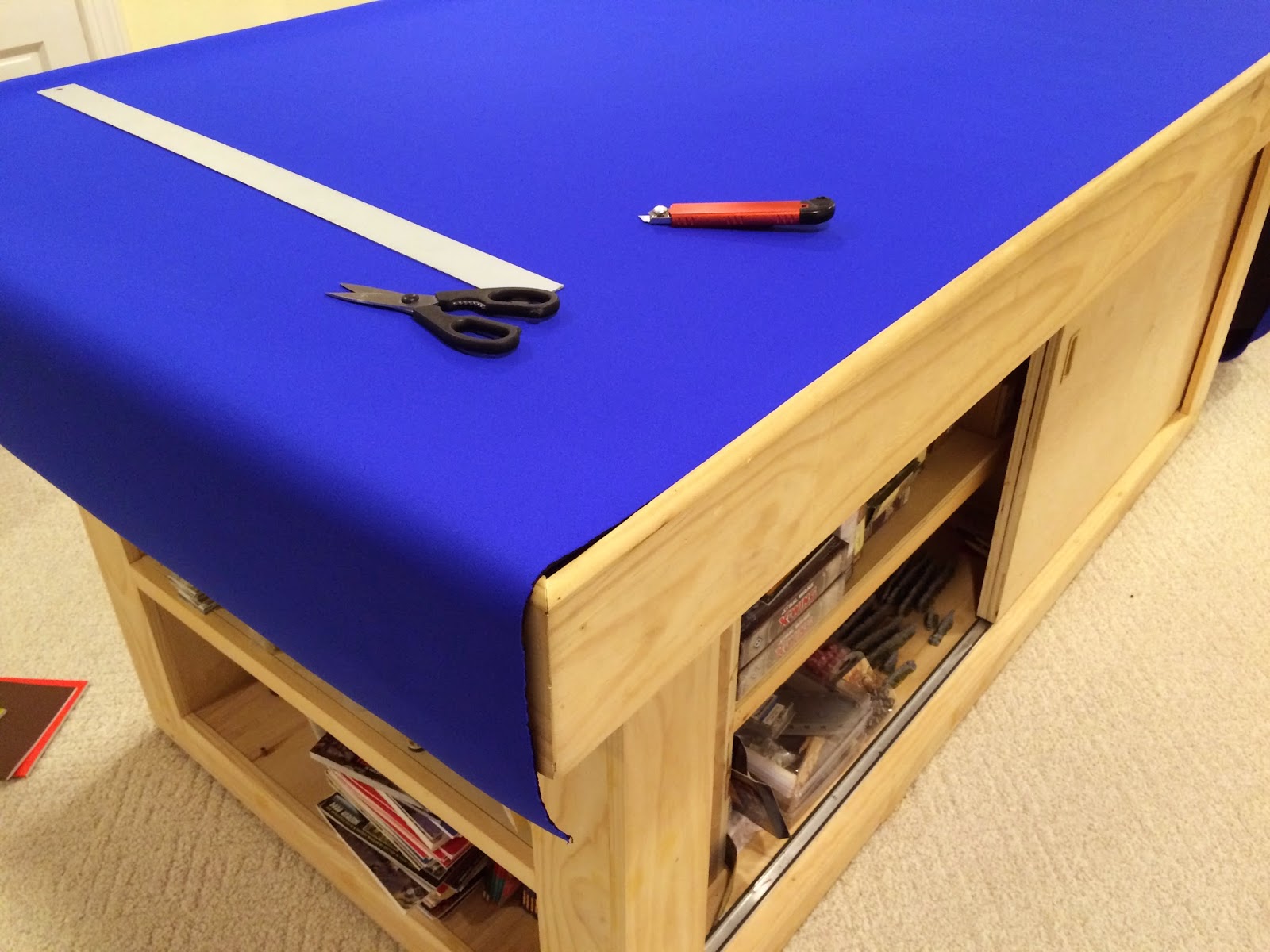 My old naval gaming mats were felt and just never did all that great.  Ships would snap when moving across and sometimes it just wouldn't lay right.  I've seen a kickstarter for a pre-printed land gaming mat made from Neoprene (the stuff used to make mouse pads and diving suits) and thought it might be a good option.  A bit of google-fu and I found an online seller, Foamorder.com, and ordered some 3mm think neoprene.  It comes in large rolls - mine was 51 inches wide and rover 12 feet long for a very reasonable price (approx. $60.00).  Foamorder's service was very fast and I recommend them 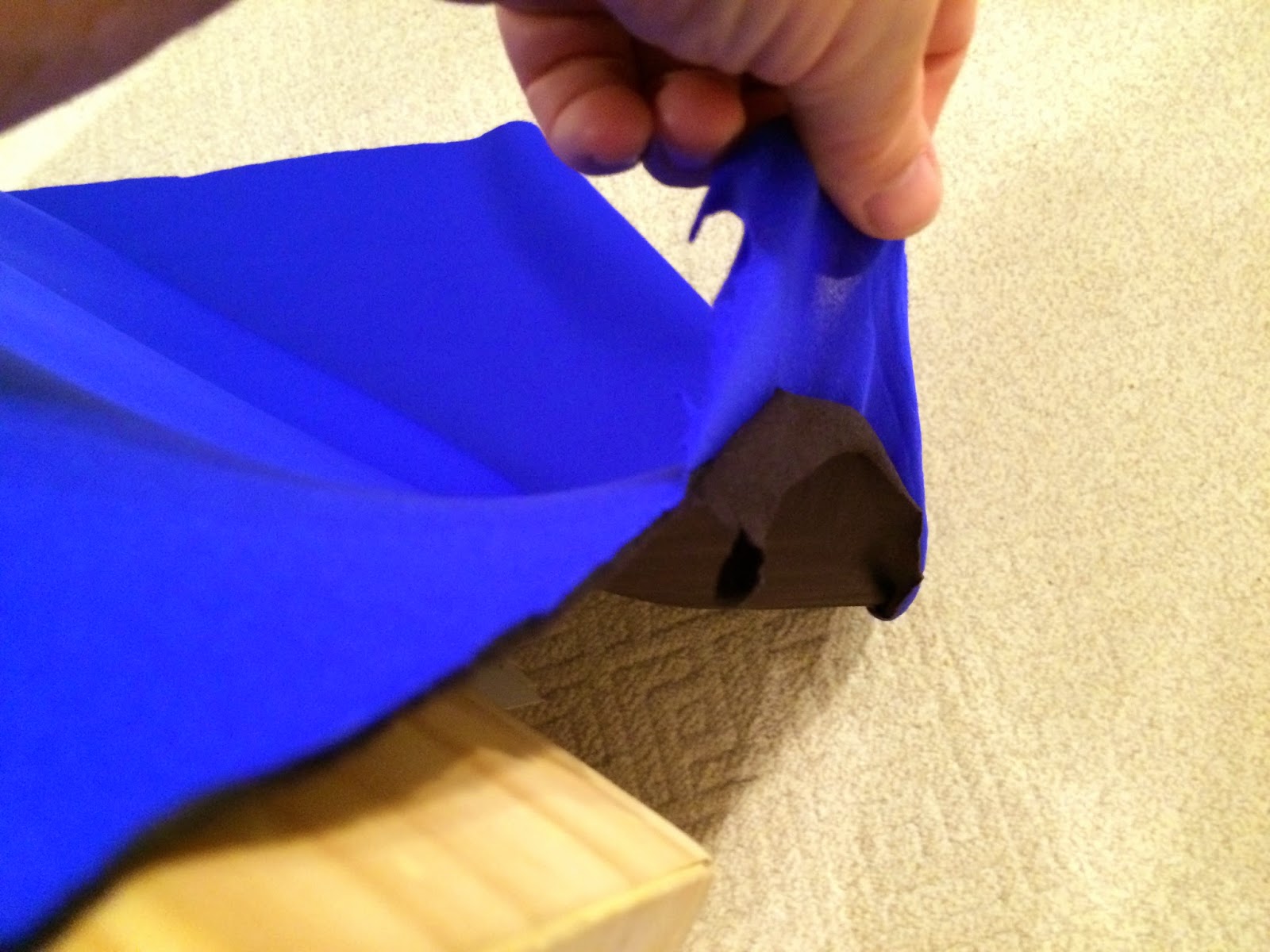 One side covered in royal blue and the other in a black fabric.  The Neoprene is 3mm thick so it's nice and heavy when laying out on the table. 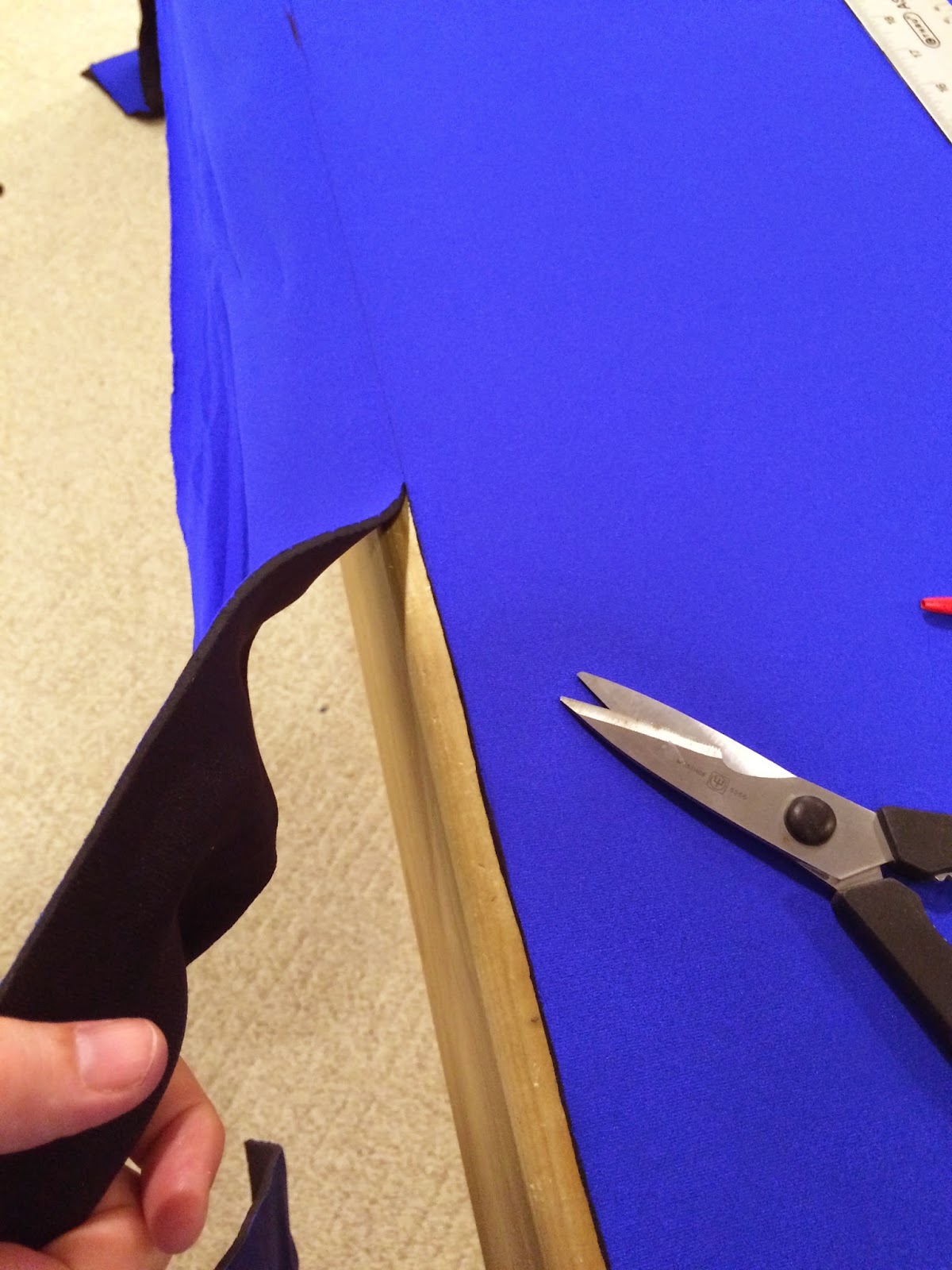 Citting to fit my 8 foot by 4 foot gaming table was very easy.  I do recommend using a good pair of scissors to cut the neoprene.  A standard box cutter just doesn't work that well.  The material is easy to work with if you cut slowly. As indicated earlier, one side of the neoprene is blue for naval gaming and the other is black for space gaming - X-Wing anyone? 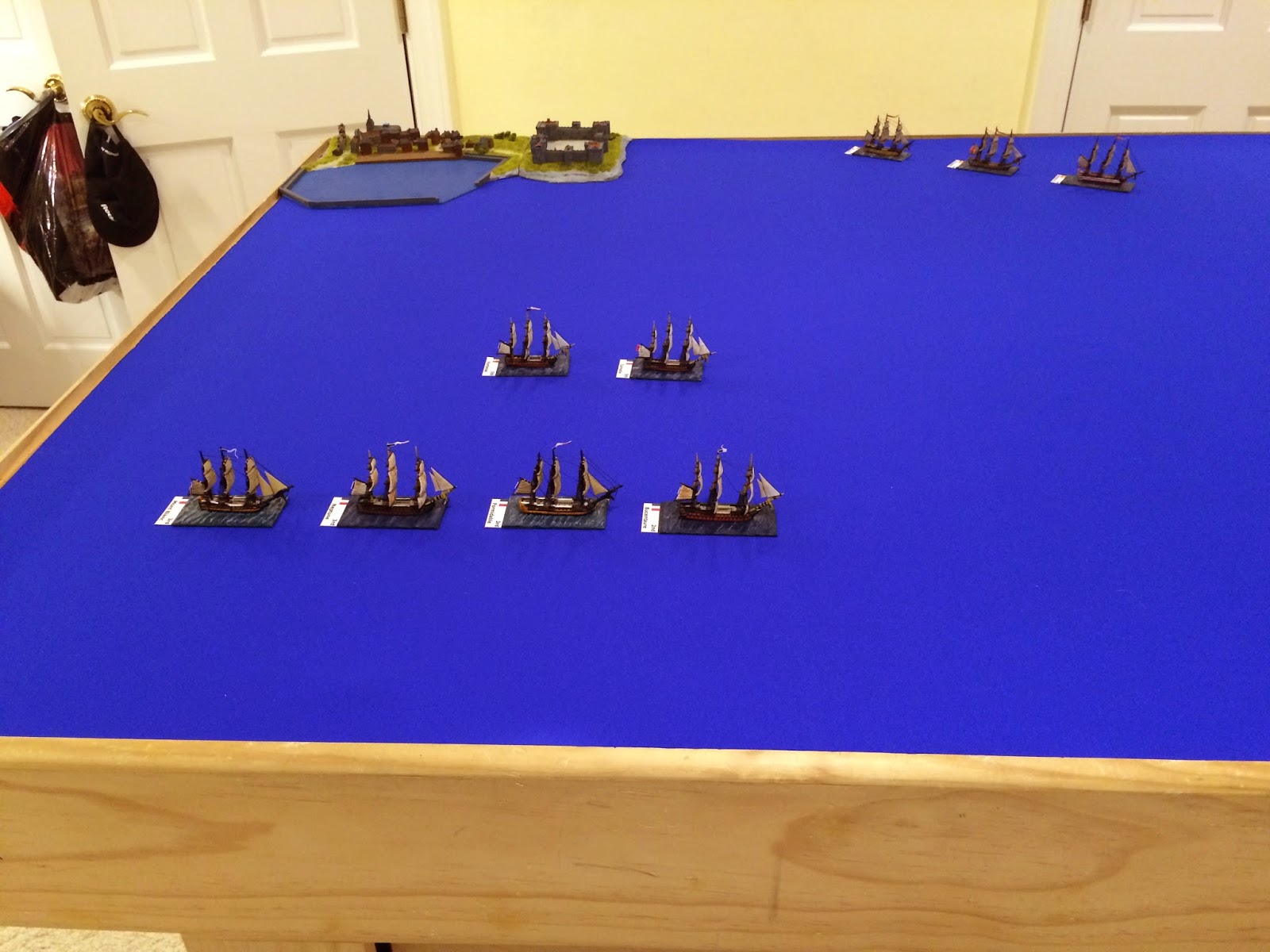 I'm hoping to host a game in the next few months so after getting the mat ready a set up a test game.  The first picture shows a combine French and Spanish fleet sailing past a British port to intercept a convoy.  The French fleet consists of 1 second rate, 3 third rates and 2 frigates.  Their Spanish allies have 1 first rate and 2 third rates. 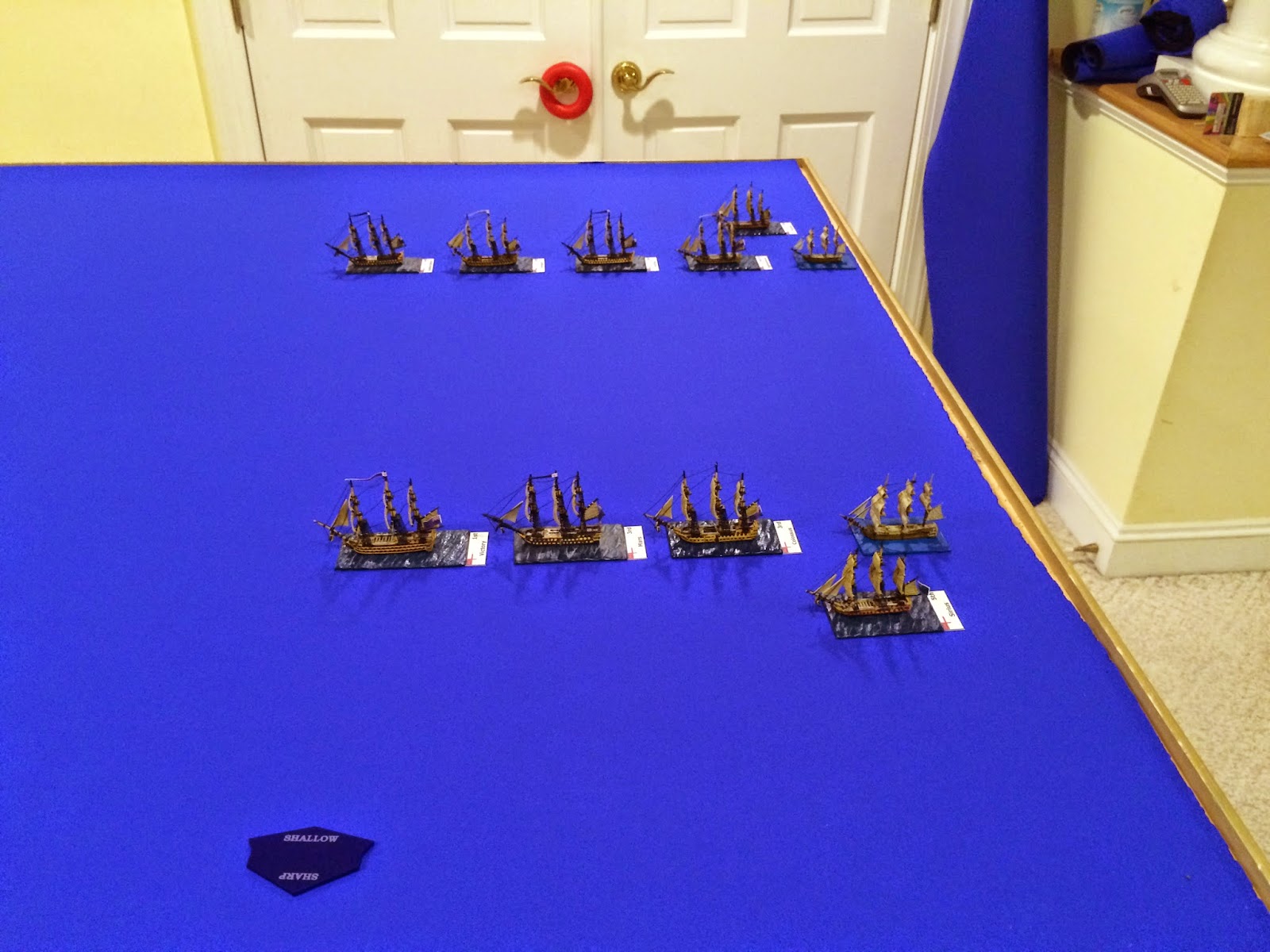 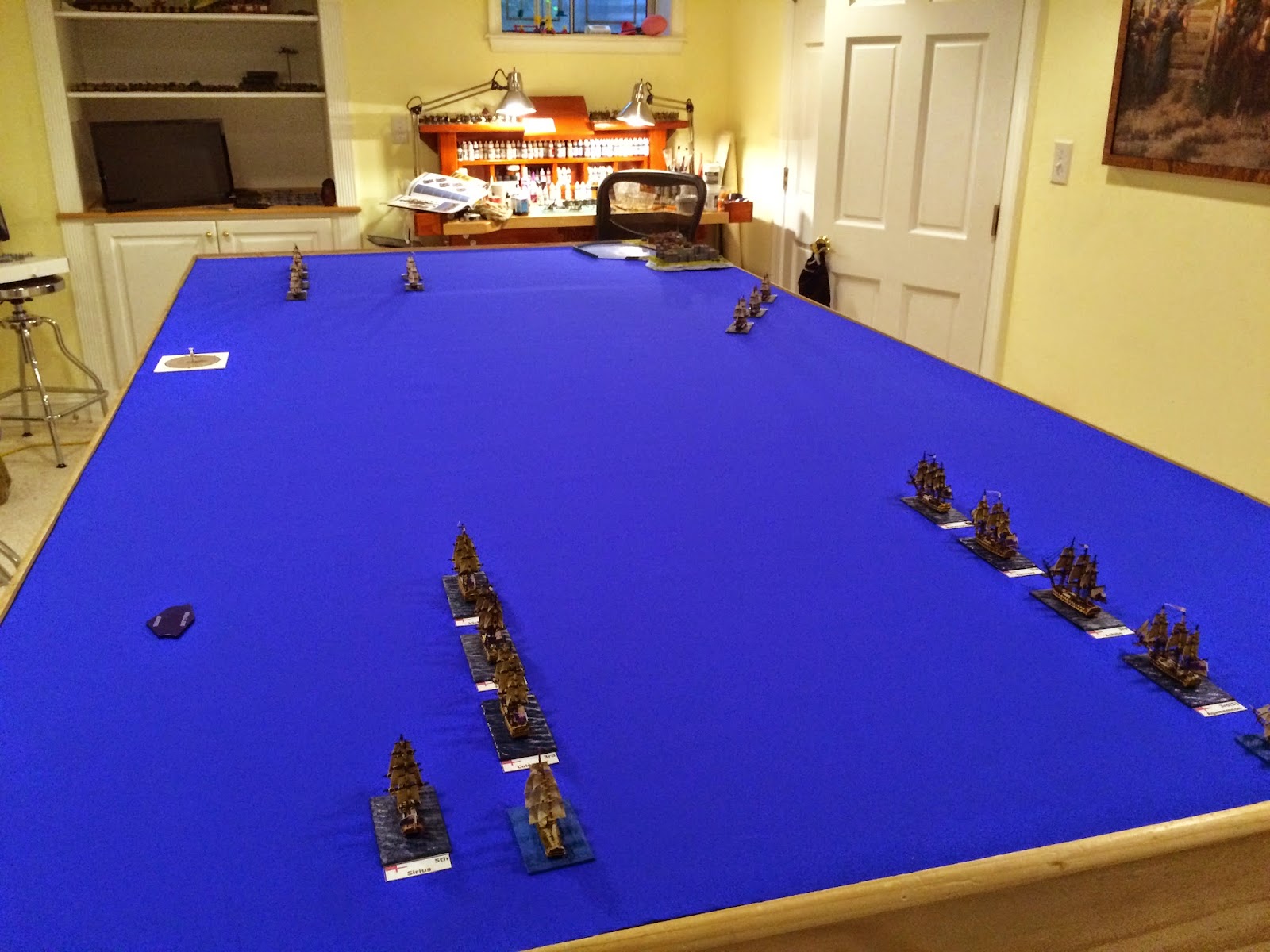 Seems like the port is far away!  There will be some experimenting with the initial ship placement and starting wind direction. 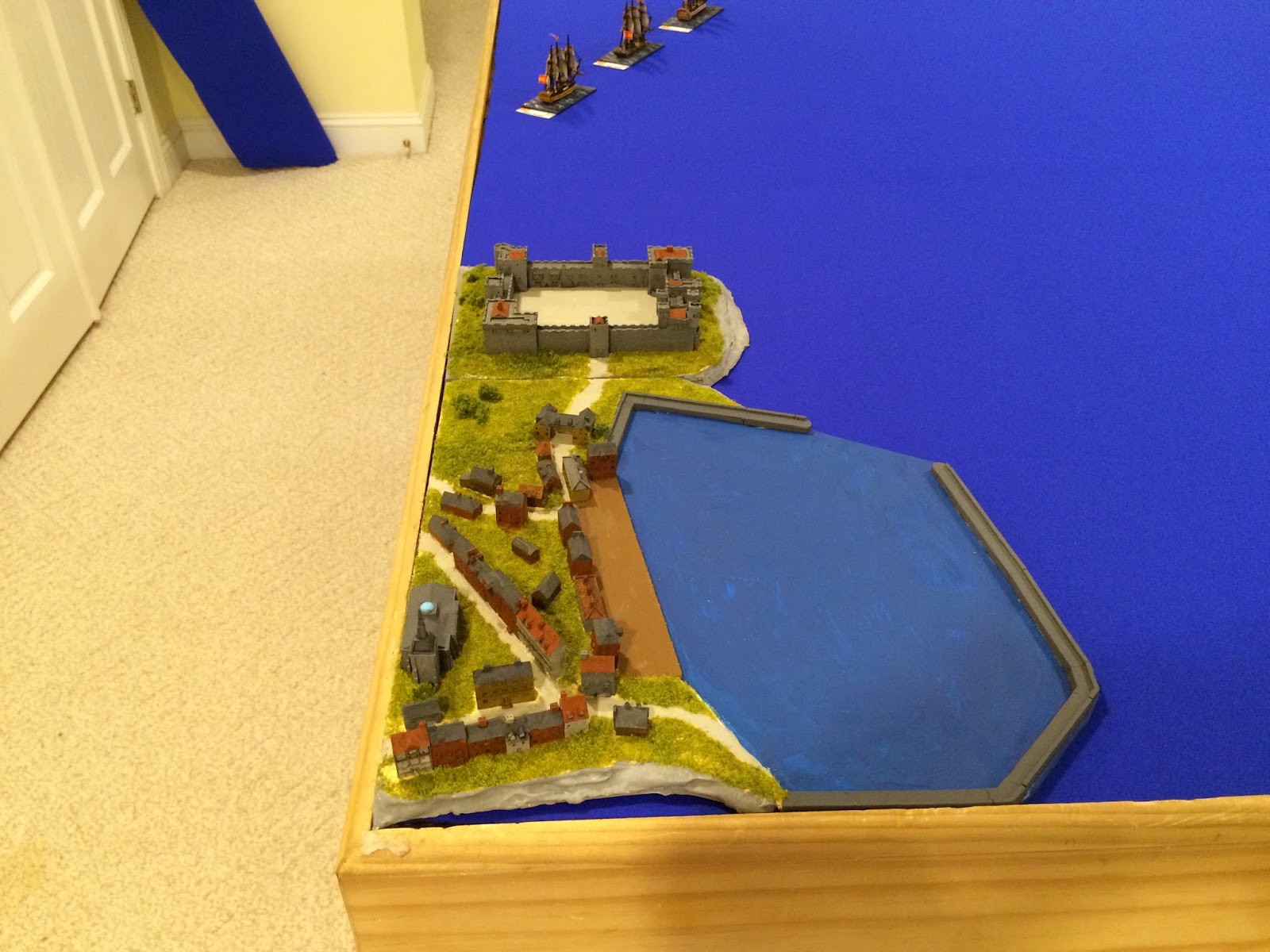 A close up of the port - it was a fun little terrain project.  I'm not sure how powerful to make the batteries in the fort that guards the entrance to the harbor - hence the play testing!

I really like the neoprene matt - it lays very flat, is easy to move ships across and deadens dice rolling (less dice going going off the table).
Posted by jmilesr at 10:26 PM 11 comments:

A Little Progress on the Essex and LOTR Card Game 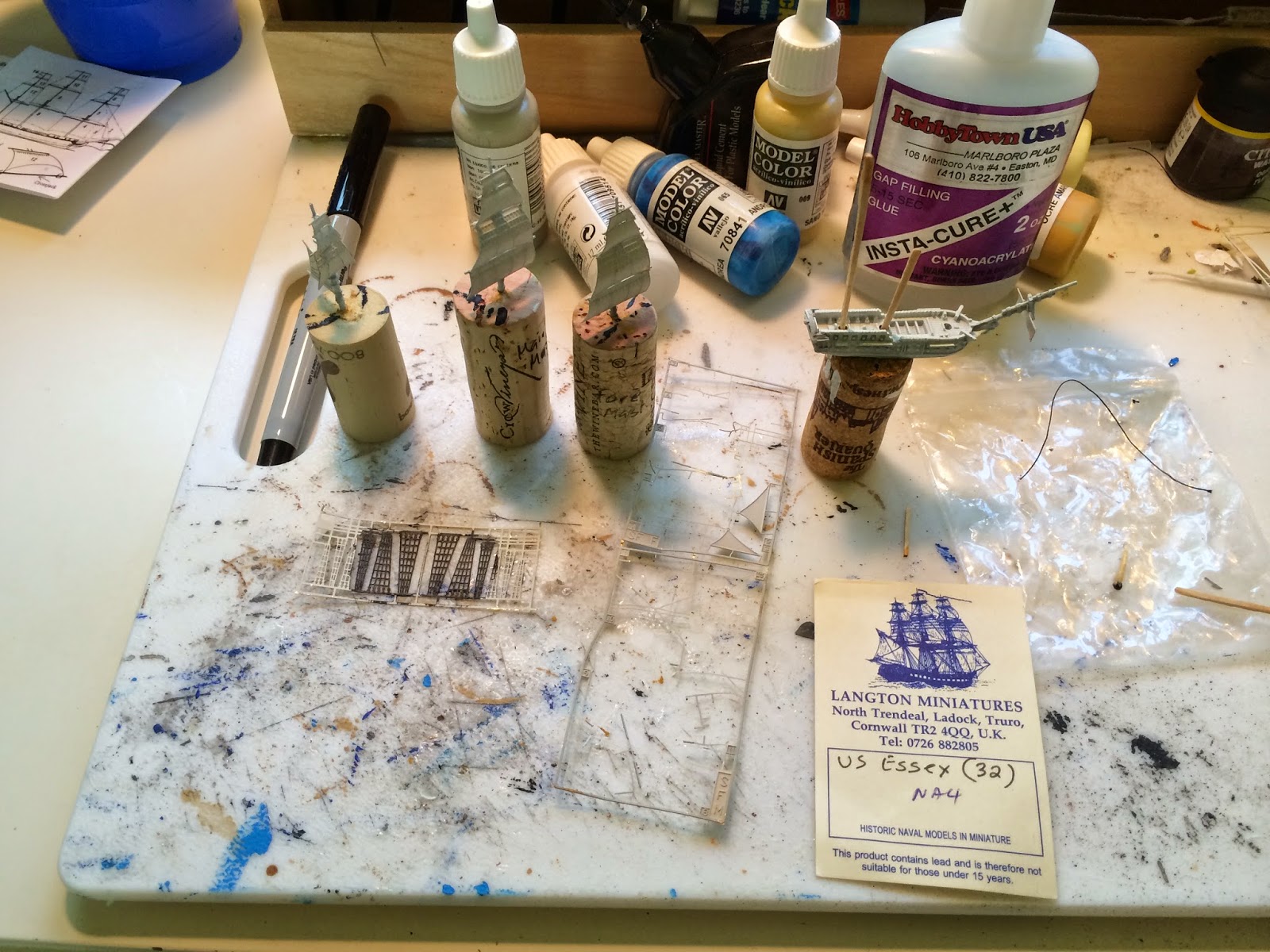 Not a lot has been accomplished on the modeling workbench other than some work on the brass sails for the USS Essex - a 32 gun frigate in 1/1200 scale.  After I took this picture a  bit more progress was made as the hull and deck got their initial painting applied.  I should finish the Essex next weekend and then may take a break from the 1/1200 Langtons for a bit.  Next up will be some 15mm Flames of War units for an upcoming tournament. 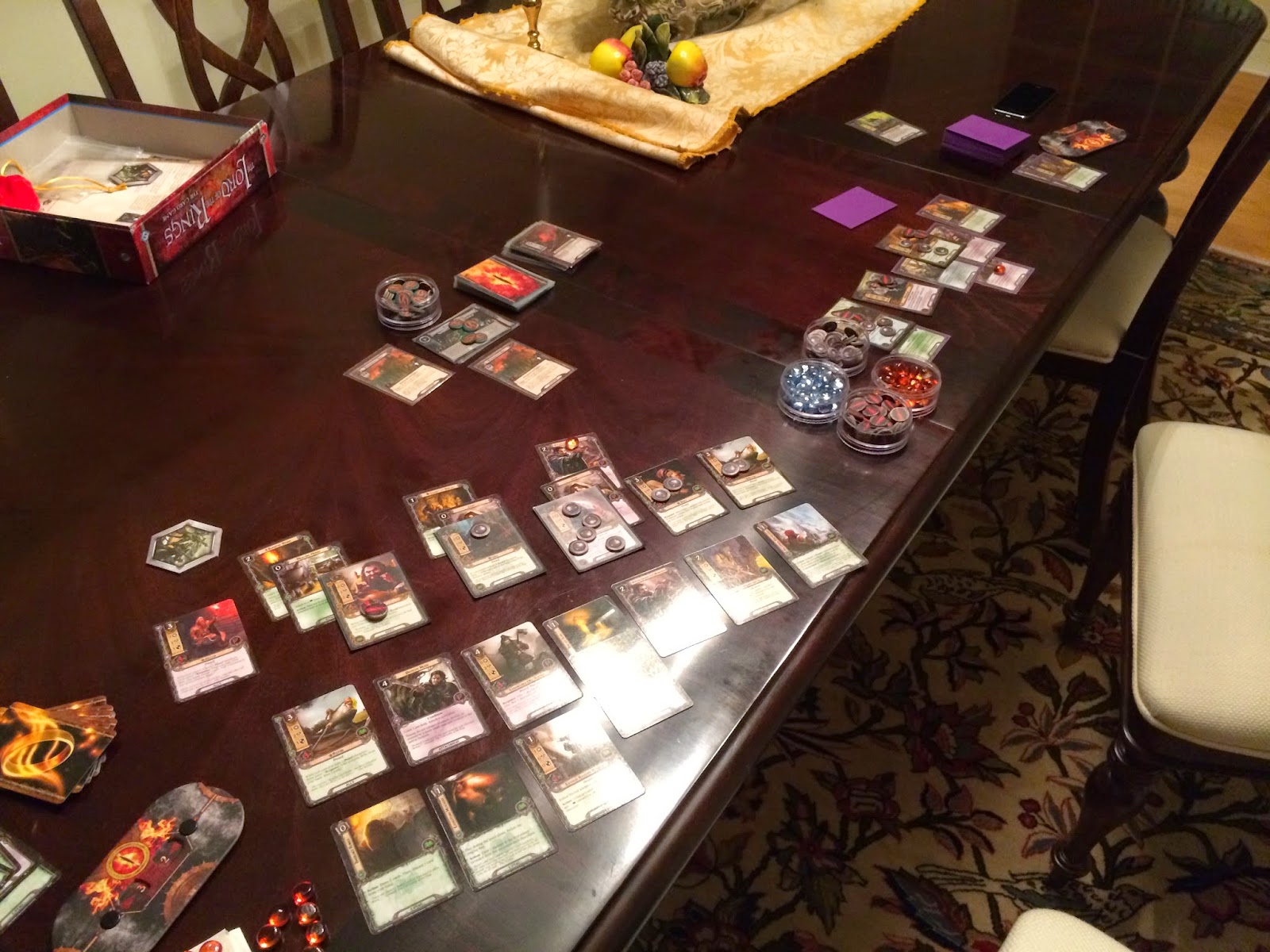 Last weekend I did get a chance to play the Lord of the Rings card game from Fantasy Flight Games.  To be honest, I was very dubious about the game and most card games in general.  My concerns were misplaced, the LOTR card game is a lot of fun to play and does a surprisingly good job of conveying the feel for Middle Earth to the point I was recalling how much I enjoyed the books when I first read them in High School (yes the printing presses existed back then).  Thanks to Steve MacLauchlan for taking the time to teach a gaming luddite such as myself the  key points of the game. 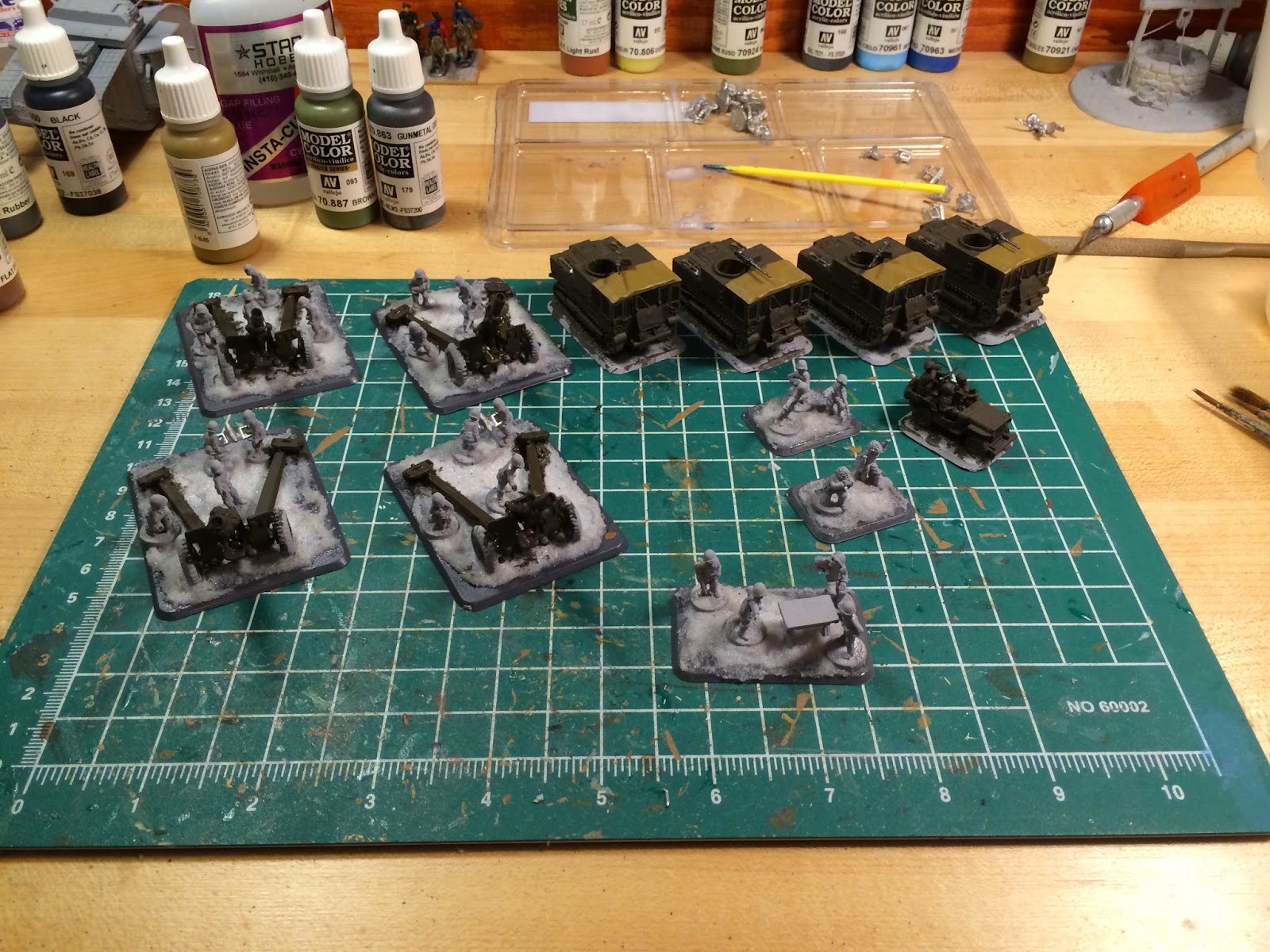 A bit of a change of pace as my current project is a 155mm US Artillery unit for Flames of War. I signed up for a tournament in early October and want to bring a US Glider Infantry force.  In the current rules version Artillery is very effective for the US so one doesn't leave home without it!

There's a pretty active debate in terms of if allied artillery is too effective in the game but dems da rules for now. 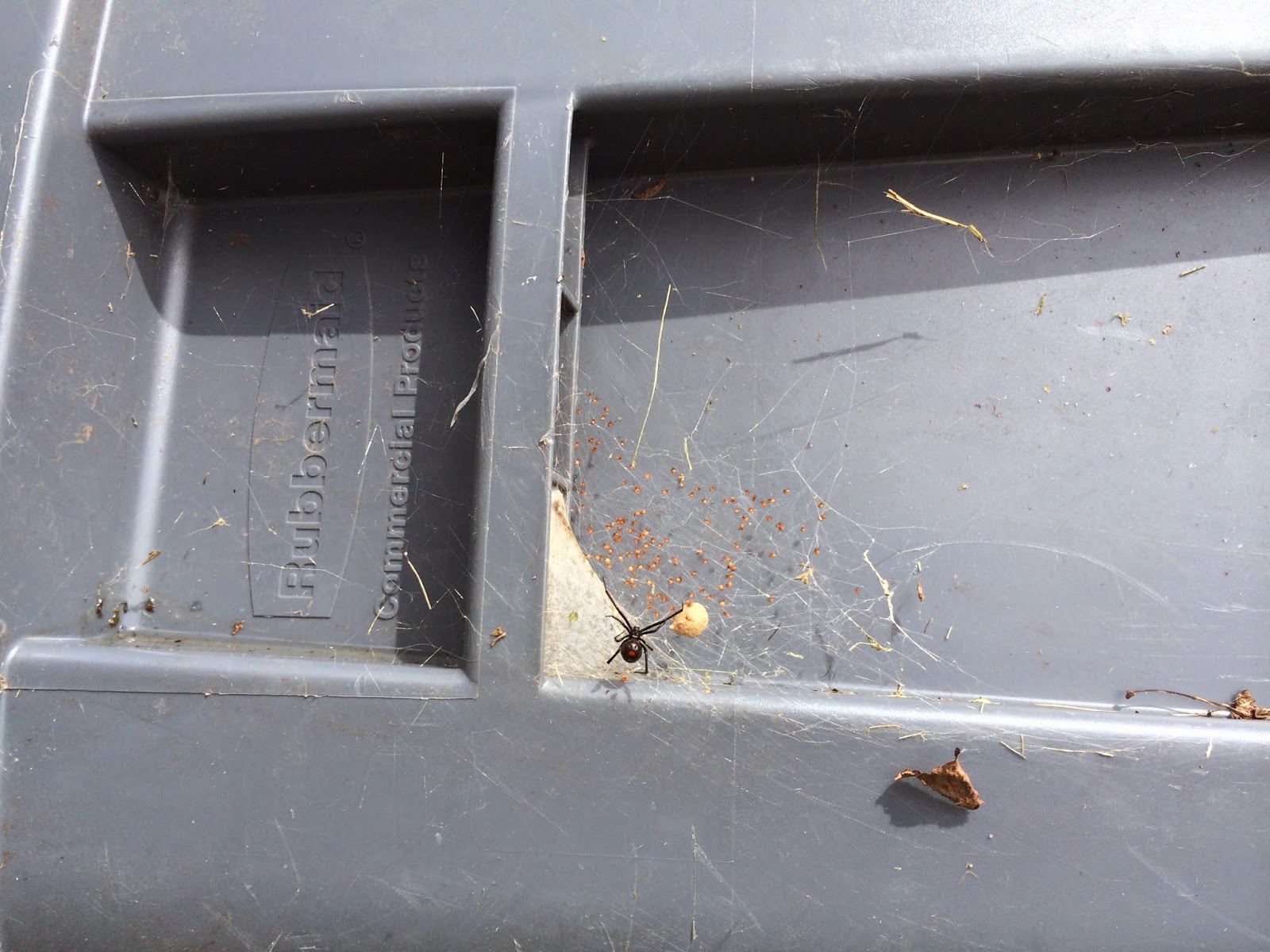 I also had a bit of spider fun today as I went to retrieve the empty trash can from the street and found this lovely family scene - a female Black Widow spider with her newly hatched brood of young (all the little brown dots).  It takes about 2-3 weeks for an egg sack to hatch so I've been trundling this trash can with it's veritable "cargo of death" (OK that was a little melodramatic) for a good bit.

Some of you may remember from earlier posts that I'm not the biggest fan of our eight legged arachnid friends (Shelob Lives!).  I admit it, I'm a spider wimp.

My first reaction to this fearsome arachnid incursion was typical of most Bolt Action players - when in doubt employ a vehicle flame thrower or my case douse the bin in gasoline and light it on fire - that's 3 D6 hits you, you nasty spiders!  I then realized that doing so would render my plastic trash bin unusable (except as a stark message to future spider invaders) and provide yet even more fodder for my wife to ridicule me.  With logic ruling out a flame attack, I was left with one choice - chemical agents.  A quick trip to the local hardware store and I returned with a few cans of spider killer (I think it's just normal bug killer sold at a premium 'cause there's a picture of a spider on the can).  Never-the-less, said agent was quickly dispersed over the can and where we keep the cans and the local problem nuetralized.  At least, I think so ........
Posted by jmilesr at 6:54 AM 7 comments:

2 US Ships of Line Ready for Service 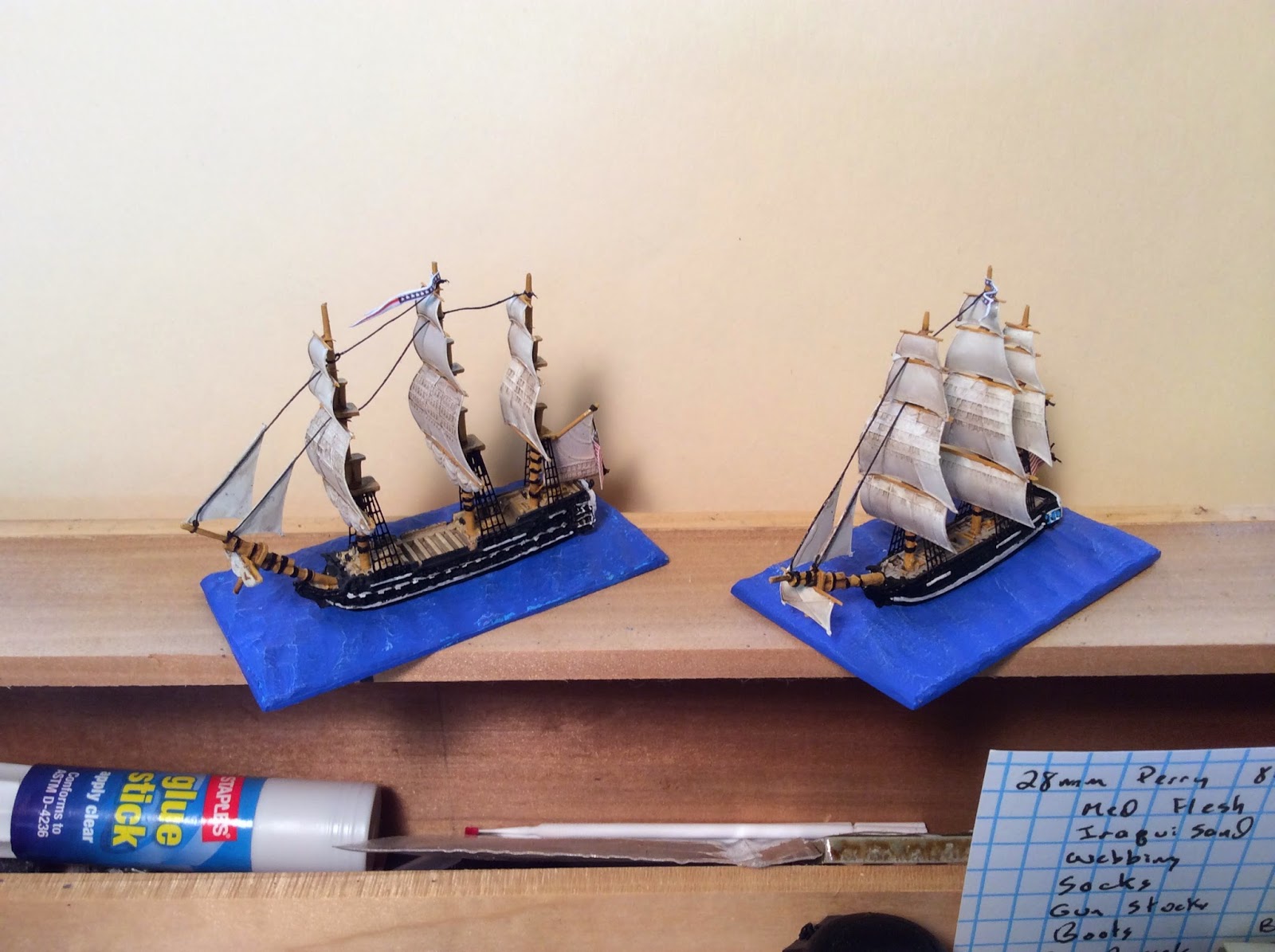 My 1/1200 Scale US Fleet has been enlarged by two new ships of the line - the 74 Gun Third Rate USS Columbus (on the left) and the 44 gun Frigate USS Congress (on the right). 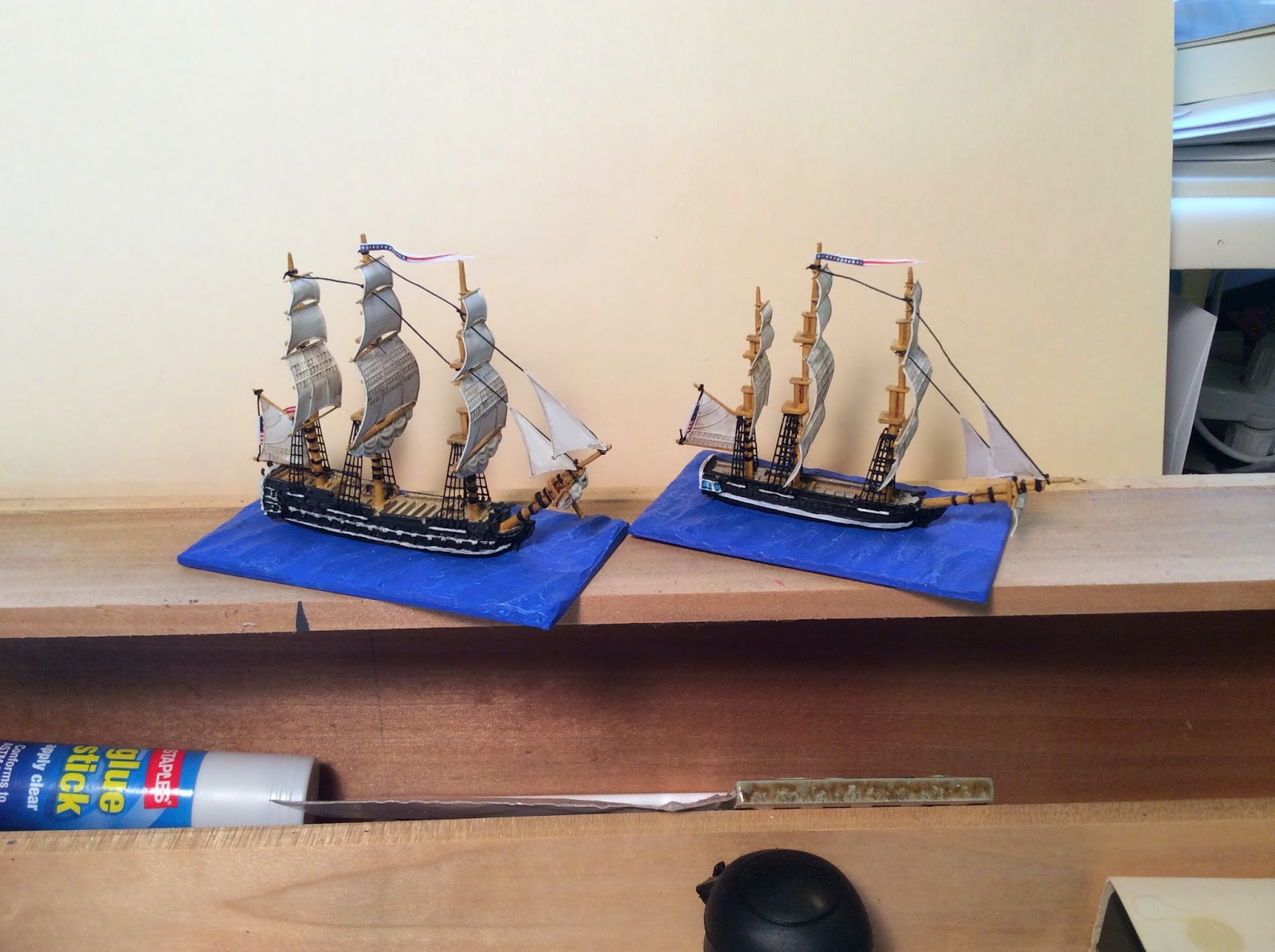 A view of the other side of these ships.  Next up for the US is the 38 gun frigate Essex and then some odds and ends from GHQ - a Xebec, a 24 gun East Indiaman and a Baltimore Clipper.  I'm hoping to put on an Age of Sail game in the next few weeks. 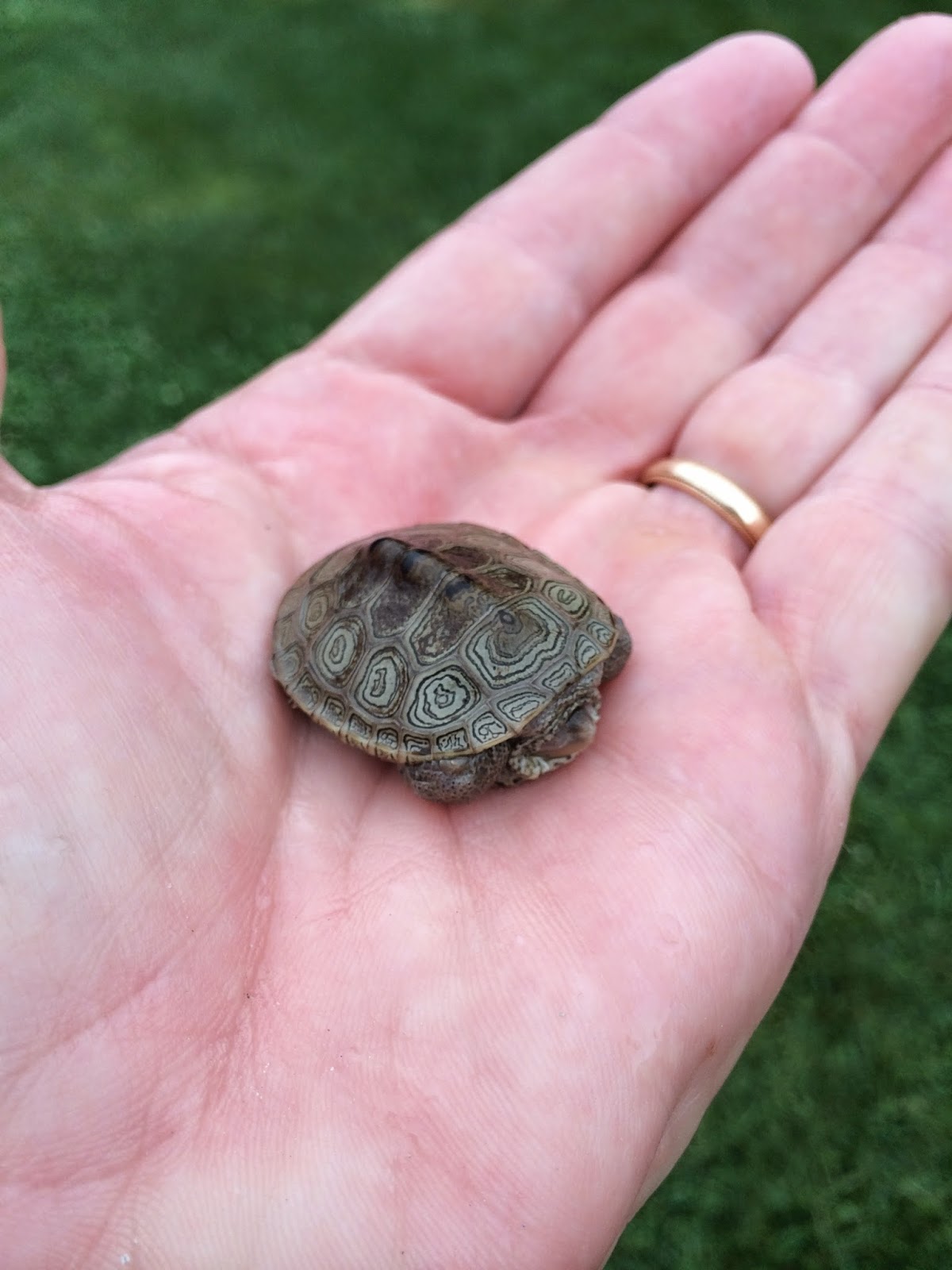 I had a visitor in my pool yesterday - a newly hatched Terrapin turtle - cute little bugger isn't he.  He swam up to my wife while she was exercising in the pool.  I'm not sure who was scarred more my wife or "Bubba" as we've dubbed him.

After making sure he wasn't hurt, I re-located him to the marsh and wished him the best of luck.  It's a tough world out there for little turtles.
Posted by jmilesr at 4:47 PM 6 comments: