Away on Vacation and Hello Irene 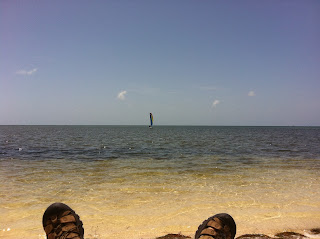 Sorry for the lack of posts, but I've been away on vacation for a few weeks in the FL keys.  The first week was at a Boy Scout survival camp with my sons' scout troop - no running water, had to catch / find your food, sleep outside.  It was a lot of fun.  The highlight of week was a run in with a very curious 11 foot Hammerhead while kayak fishing with the troop.  While the shark was very well mannered, we all learned why fish tend to group together!  He followed us for 15-20 minutes and then went on his merry way.  I do have a better appreciation for how it feels to be in the middle of the food chain.

The second week, my wife joined us and we stayed in a nice hotel (which is next to the Boy scout Island!) where I continued to refine my very impressive laziness skills.  The picture shows my feet and my son way out on the resorts Hobie-cat sailboat.  The keys are a very nice place to visit and the fishing is fantastic.

Upon returning to MD, we started preparing for an uninvited guest, Hurricane Irene - she seems to be calming down a bit but it never pays to take chances with Hurricanes when you live on the coast.  Perhaps I'll get some war gaming in the next week or so.
Posted by jmilesr at 8:33 AM 4 comments: Links 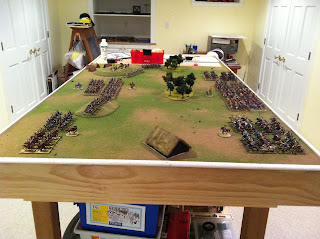 My son and I had a quick Roman vs Dacian fight the other night using Hail Caesar.  The game was one of those standard ancients "line'em up and go" scenarios with no special rules.  As with a lot of my battle reports,  I forgot to take pictures of the game in process.  My son, Sean, commanded the Dacians and I played the Romans. 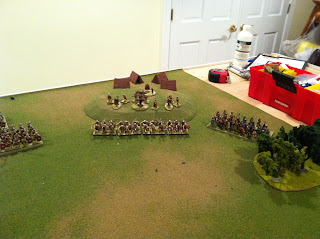 The Roman left wing proved to be my undoing as it was too weak to withstand the onslaught of the Sarmatian Cataphracts and Heavy Cavalry.  The artillery on the hill was helpful but the light troops were unsupported and could not stand up to the charge of the heavies. 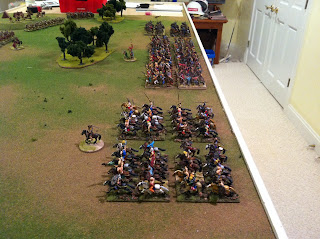 Here's a picture of the Dacian battle line, 4 light cavalry on the left wing, 6 warbands with falx's in the center and the two Sarmatian cav's on the right. 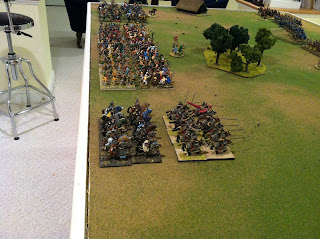 The "stars" of the battle - Sarmatian cataphracts and Heavy cav.  Almost all of the figures on the table are from Warlord games.  I'm planning on expanding both armies over the next few months.  I picked up some Successor armored elephant units at Historicon which I will convert into Romans using some extra plastic figures.  Those poor Roman's need something to counter the Sarmatians! 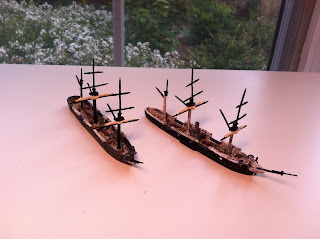 I've finished the basic painting for both the Kearsarge (on the right) and the Alabama (on the left).  The painting came out fine although I think I was a little heavy handed on the weathering.  I may touch up the Kearsarge to make her a bit "brighter".  The next modeling step will be to seal the models (after waiting 24hrs for the paint to dry) and then adding the rigging.  I have some photo-etched ratlines from White Ensign Models which I'm also going to try.  The models are from Thoroughbred Miniatures and are really top notch. 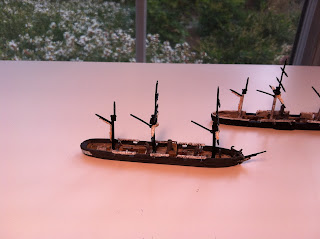 Here's the CSS Alabama.  The hull was painted Basalt Grey (Vallejo 70869).  When she met up with the Kearsarge for her fateful duel she was at the end of a long raiding cruise so I've tried to model her with a lot of "sea-wear" 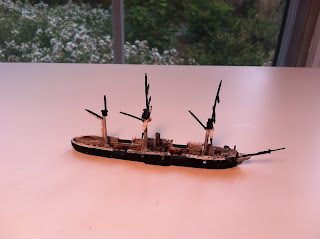 The USS Kearsarge looks a little too weathered - I think I'll repaint the mast bottoms to make her a bit less dingy.  The Kearsarge is 5.5' inches long.  From an aesthetic perspective, I think the Kearsarge is a "prettier" ship than the Alabama.

This will likely be the last wargaming / modeling post for a bit as I'm off with my son and his Boy Scout Troop to Sea Base in the FL Keys.  After that, robotics season starts up and I loose the game table to a greater good!
Posted by jmilesr at 8:52 AM 6 comments: Links