Progress on Ancients for Historicon 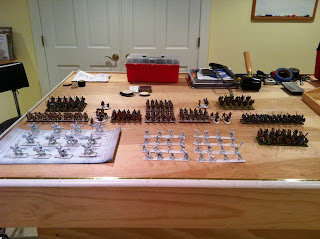 A good bit of progress on painting the Romans and Dacians I'll be using for my upcoming "Hail Caesar" game at Historison.  The first picture shows the units that I have on hand - the Romans are just about done and there is a lot of work to go on the Dacians. 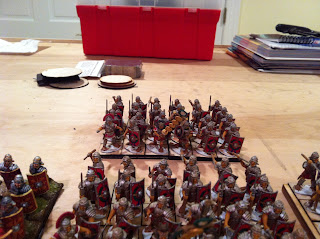 This past week, I completed another 24 figure Roman cohort - it's the one to the back of the second photo.  One more "regular" Legionnaire cohort to go and if I get so real progress on the Dacians, I may throw in a unit of Praetorian guards for fun. 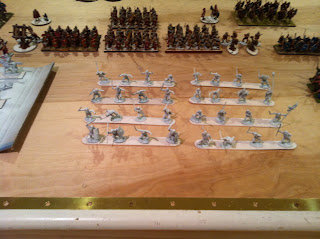 Here is a 32 figure Dacian warhost (all Warlord figures) assembled and primed.  I'm hoping to have six to seven of these units completed by Historicon.  It's not as bleak as it seems as some of my war gaming buddies (Dick and Les) are pitching in to help with the assembly and painting.  I'm very grateful for their generous help. 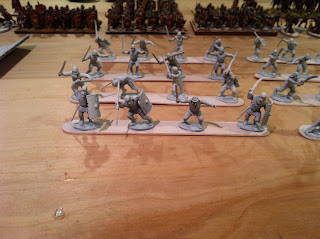 One of the nice things about plastic figures are all the left overs.  I decided to equip some of my Dacians with captured Roman weapons and armor.  I'll also be modifying the Romans to show some of the Field improvements Trajan's Romans put in place to counter the feared Dacian Falx. 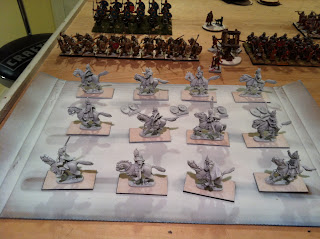 The Dacian army will feature a unit of Sarmation heavy calvary.  These are Old Glory Sarmatians and they fit in well with the Warlord figures.  The oval shields in the last picture are for the Dacian infantry.  I've seen some blurbs that Warlord will be bring out some Sarmation calvary in the future.  I do plan on building out a full Sarmation army post Historicon. 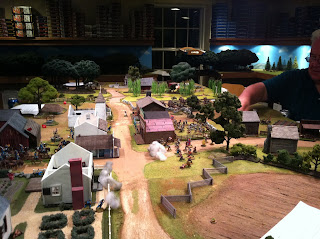 Last night saw a break in painting up ancients and I was able to go over to Ernie's house and help with play testing his upcoming Uncivil War rules.  We played not not one, not two, but three of the included scenarios last night.  It was a blast and the rules are coming along very nicely.  Ernie (Architects of War) will be posting some more detailed AAR's on his blog, so I will not go into a lot of detail now. 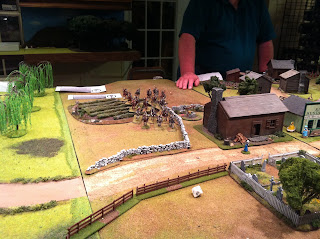 The game plays very quickly and definitely has a lot of period character to it.  The picture to the left shows some dashing rebel calvary trying the flank the raiding Union force.  The game pictured was a supply raid where the union has to search through the town looking for supplies (markers with hidden values).  Initially the Union far out numbers the confederates, but as the game goes on, more reb's join the fight. 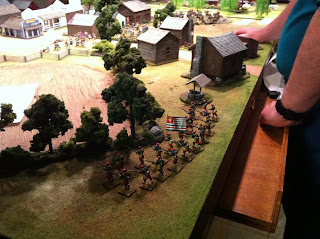 Including my contribution to the evenings forces - a contingent of Confederate Zouaves - the Louisiana Tigers!  The figures are the Perry plastic Zouaves and they are very detailed uniforms to paint.  If any of you are going to Historicon this year, please consider playing in or checking out the Uncivil War demo games on Saturday, which start at 1:00pm (game numbers S-260 and S-261).
Posted by jmilesr at 6:27 AM 6 comments: 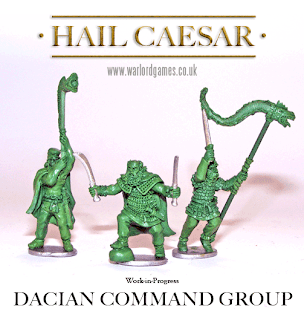 Warlord is expanding their line of 28mm Dacian figures, which is very nice of them since I'm frantically trying to finish a Dacian army for the "Hail Caesar" demo game I'm GM'ng at Historicon this coming July.

I do like the center figure with the bald head and two swords.

There are even rumors of Sarmatian heavy cavalry in the offing.

Back to Painting Romans & 2 French Frigates

Given that my first foray into GM'ng a convention game coming in less than 2 months (Historicon), there was a need to switch gears and work on some more troops.  Two more 24 figure Roman cohorts are now underway and should be completed in the next week or so. 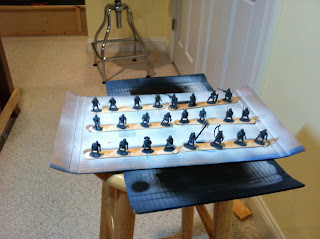 One cohort is in painting and the other is assembled  and waiting to be primed.  Like my other Legionaries, these figures are the 28mm Warlord plastics.  I really like the Warlord plastics and have done some very minor customizations just for kicks.

Thats a nice sized force to go up against....

I'm hoping the Dacians will be a fun force to play - I don't see them around that much and my version will feature some Sarmatian light and heavy cavalry.  Well the Sarmatian light cavalry might look like the Warlord Celtic Cavalry but it will do.

My game is sponsored by Architects of War, so I need to do a good job on the presentation - no pressure there! 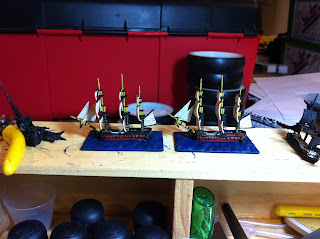 I did manage to finish (except for rigging) 2, 44 gun French frigates.  The rigging should only take an hour or so and will get done later this week.  That will be it on naval modeling until after the prep work for Hcon is done.  I still need to build the sectional terrain boards and some special items for the scenario.

It should be a busy few months. 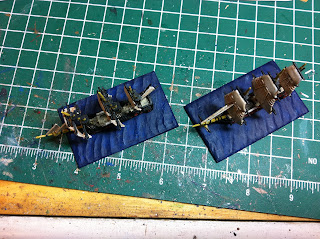 I'm heading into uncharted territory in July as I've agreed to be a GM for a demo of Hail Caesar at Historicon.  Proof of this folly is now available publicly as the Preliminary Event List (PEL) has been published and there you can see this titanic struggle listed (F-210).  The game will be held on Friday from 2:00 - 5:00 and if there's enough interest and a free table, I'll run another later on during the convention (likely Saturday night).  A post game round of drinks will be on me!

In full disclosure, this will be my first time GM'ng a convention game, so no whining if I screw up or arbitrarily change the rules against you because your opponent is an attractive 20 something female "gamer-grouppie".  Hey, it could happen!

I will be busy over the next few months painting up an opponent for my plucky Romans and adding some new terrain items from Architects of War, who are the official sponsors of the game.

What have I gotten myself into?
Posted by jmilesr at 6:24 AM 4 comments: 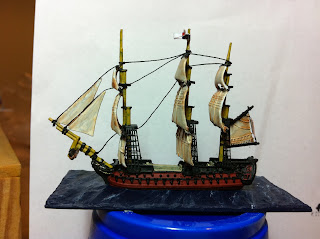 The flagship for my growing French fleet, the Bucentaure, has just been completed.  Again completed is a relative term, as I need both add to and tighten the rigging, but she's ready for the table.  The Bucentaure is an 80 gun ship of the line and was the flagship for the French at Trafalgar. 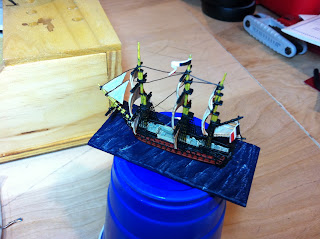 I hope to command her to a better fate against those Brits than Villenueve did!  I'm very happy with how the model came out and look forward to getting some table top time with these ships in the near future.  By the end of May, my fleet should consist of 25 completed 1/1200 Langtons and I'll be well on my way to my long term goal of re-fighting Trafalgar with models of all the ships present (60 ships-of-the-line and 13 Frigates)! 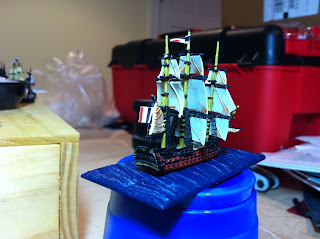 I do apologize for the background clutter (robotics is still in clean up and organization mode).  I may try to build a small photo booth to help improve the picture quality - any suggestions would be greatly appreciated.
Posted by jmilesr at 7:55 AM 9 comments: 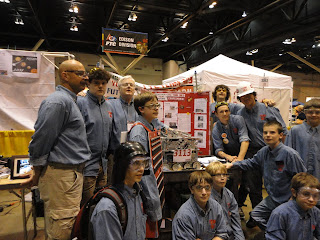 The FIRST Robotics worlds championship was last week and my son's team performed very well.  They scored 4 wins and 3 losses in the qualifying rounds but were knocked out just prior to the semi-finals.  All-in-all a great showing and I'm very proud of the team.  The first picture is a team photo in our "pit area" where the robot is prep'd before competitions.

The next photo is of my drive team queuing up for a match with the three other teams (2 on each side).  The championship was held in the Robert Jones stadium (where the NFL Ram play) in St Louis.  The drive team is wearing our black jerseys with our team number "3113". 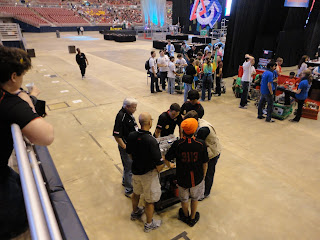 Here's a picture of some frantic last minute repairs before another match.  As you would expect the competition was very fierce and our robot sustained a good bit of damage.  Of course it dished out the same 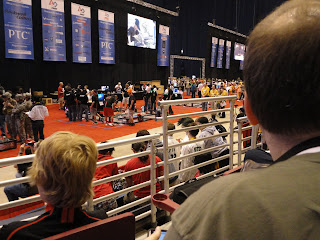 Lastly a long range shot taken by my wife that show the team on the field just prior to a match starting.  It has been a blast coaching this team team and I am very proud of both my son, Sean, and all the boys.  This was our first world championship and the scouts acquitted themselves well.  Our final ranking for the year will be 11th out of the over 1,600 teams that compete in the FTC competition.  Not bad for a bunch of Boy Scouts who are just starting out with Robotics!
Posted by jmilesr at 12:14 PM 5 comments: