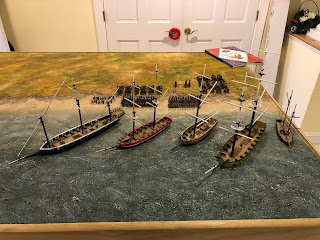 4 15mm scale frigates and sloops have been added to the fleet.  All of the models are from the fantastic "Sea Eagles" line from Thoroughbred miniatures and are highly recommended.  The kits are a lot of fun to both build and paint. 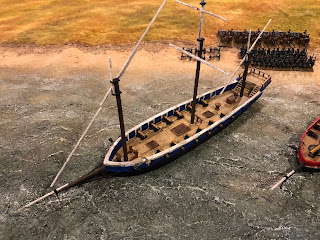 A French Polacre.  The masts may look a little short.  Heh, heh there's a funny story about that.  It seems that I may have dropped the model while painting it and some of the masts broke off.  When I say some, I mean all.  The parts are all standard sized wooden dowels so it will be easy to replace them. 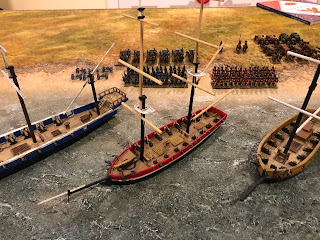 The second "French" ship is actually a model of the USS Onieda but she'll be pressed into French service for the Historicon game. 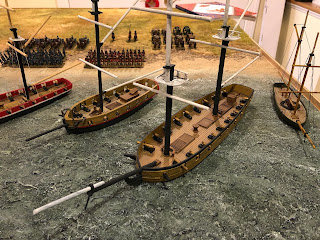 The pride of the planned British Fleet is this 18 gun brig. 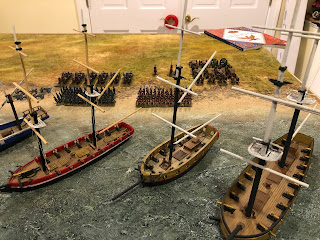 Perhaps my favorite models is this 12 gun British sloop.  It kind of reminds me of my sailboat, the Bucentaure except I'm not "allowed" to mount cannons on her. 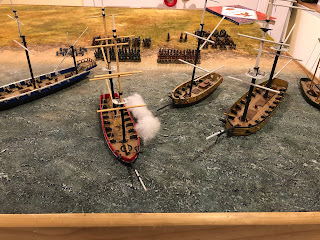 I turn my back of these kids for one second and their back to fighting.  I know I recycled this bad joke form the AHPC positing but I liked the photo and wanted to use it.

I'm really happy with how the ships are coming out and think They'll look and play great.

Still coming up is a 22 gun French/US Frigate and a Xebec - which will be in the service of the British as a mercenary.
Posted by Miles at 5:55 AM

Nice work on the ships. I'm looking forward to reading how you get them into action. I really like the Thoroughbred Sea Eagles line. I would like to get some more of them, but I don't have room to store them.

Excellent looking ships! Are there plans for 15mm crews as well?
I liked the joke. 😀