The Second Battle of the Tensaw Gap 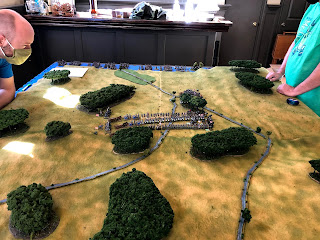 After a COVID19 delay, the NOLA campaign has resumed with turn 9.  Right before the "COVID-PAUSE" the US/British side was retreating form the closely fought Battle of the Tensaw Gap, which resulted in a narrow French Victory.  The French, sensing they had Ed on the ropes, allocated a lot of Operating Points to seize the initiative and managed to catch Eds retreating army - setting up the Second Battle of the Tensaw Gap.

One of the joys of running a campaign is that players often have different strategies than the GM anticipates so battles play out in wildly different patterns.  I knew this was the case with this battle as Ed's initial deployment was not what I had anticipated.  His initial forces consisted of 4 Infantry divisions (3 in column and 1 deployed at the top).  His pre battle instruction said he could win the battle if could retreat off the lower sides of the map in good order.  Ed had other plans.  The french would enter form the top of the map and their force consisted of 5 Infantry divisions and the deadly French artillery reserve.  We used the ESR rules for this game. 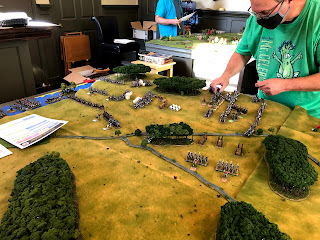 Ed left one divisions deployed in line to delay the French while assembling the other 3 in a defensive position along a crest. 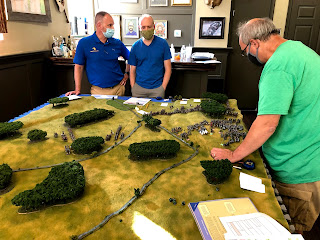 Ed continues to hunker down on the hill while Soult's corps maneuvers around his left flank. 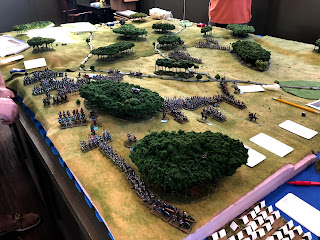 The final French infantry division shakes out of column and their artillery reserve is deployed - It's unlikely Ed can survive the combined onslaught.... 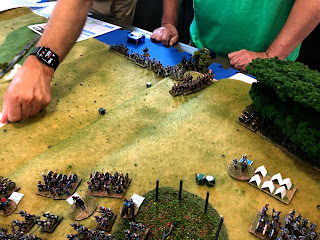 But Wait - Ed springs his drop - coming up upon the rear of the French is the British Heavy Cavalry division - now it's 5 divisions for each side!

In yet another surprise, Ed elects to march off the board rather than attack and the US/British force exits to the east.

What is this cunning strategist up to the French wonder?

I wonder what turn 10 of the 12 turn campaign will bring?