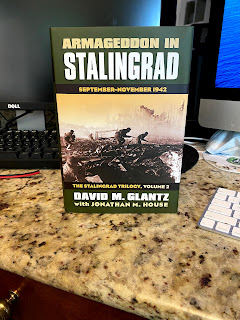 One of the more rewarding aspects of putting on a historical participation game is doing the research.  In the case of Stalingrad there is a wealth of information available in books and online.  Perhaps the single best source of information is David Glantz's three volume series on the titanic battle.  These books are not light reads but are extremely well researched.  Volume 1, To the Gates of Stalingrad covers the initial phase of the German 1942 Offensive (April to August 1942),  Volume 2, Armageddon in Stalingrad (pictured) covers the initial German Assaults from Sep to November 1942.  Volume 3, Endgame in Stalingrad covers Russian counter offensive and the ultimate surrender of the 6th army in Feb 1943.  You can find his books on Amazon at this link
Col Glantz resides in the region and you'll see him interviewed by two of my club members in an upcoming Little Wars TV video.
Since I want to do a tactical level game, it's impossible to depict the entire battle so I need to pick a specific action and are of the city.  That proved to be especially difficult as this titanic struggle had many unique areas of operation but I've decided on depicting operations in Central Stalingrad during the latter half of September 1942 - specifically the area of operations involving the Soviet 13th Guards division. 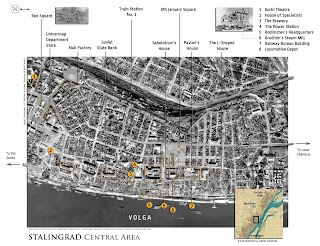 Why this slice of the battle vs others?  Several reasons.
I find the story of the 13th Guards particularly compelling and this is a project that will take 10+ months to finish.  I have found (the hard way) that one needs to pick storylines that are personally compelling when embarking on large, crazy projects like this or they turn into drudgery about halfway through and sometimes never get completed or get done in a half assed way.
Another reason is this was a see-saw battle with the Germans reaching the banks of the Volga several times only to be thrown back by desperate Soviet counterattacks.  Good participation games involve both sides having both defensive and offensive roles - that makes for better "gaming theater"
Lastly the central area of Stalingrad has lots of iconic terrain aspects which will be fun to build BUT it is not dominated by any one giant feature.  The tractor works was a huge facility and would take up 1/2 of a table just like the Mamayev Kurgan or grain mill would).  Having a single terrain piece dominate a table draws players to it and essentially dictates the flow of battle.  That may be accurate from a historical perspective but a s a GM who will run the game 6+ times that gets boring.  Seeing players come up with ways to solve a problem that I never conceived of is one of the more rewarding aspects of being a GM.
My goal is the field a 10x5 foot table that is as close to an accurate model of the central Stalingrad area as I can achieve.  The first step is to define the boundaries 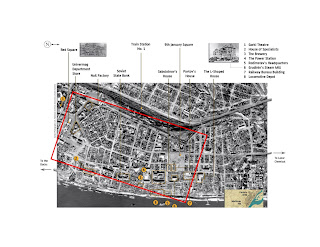 Using powerpoint, I placed a box that matches the table dimensions where the length is twice the width and then started to move it around to see if I could cover all the "main sites".  Specifically I wanted to include:
- the Univermag Department store (left center)
- Train Station #1 (upper center)
- Pavlov's House (right center)
- Grudinin Mill (lower right)
The major drawback from this configuration is I don't have the Volga river which would be visually nice and add a little drama to the game as the soviets defend with their backs to the river.  There are three options to solve this issue:
- Add another foot or so to the table width (make it 8x6)
- Make the buildings at a 10-12mm scale.
- compress the map and remove some terrain
It will likely be the latter as a 6 foot wide table in a game where players need to move unit stands over rubble terrain and building interiors is just asking for the dreaded "belly smash" along the table edge as players with ample "stored provisions" lean across the table crushing everything in their path.  It is not a pretty sight and the cries of minis as they are about to be suffocated is something that will haunt you forever.
I think some creative terra-forming is in order but I need to think on it a bit to figure out exactly what to do.
Building wise the plan is to build as accurately as I can 15 or so "landmark buildings" - pretty much all of the ones identified on the map images above  and then have a bunch of standardized rubble hexes for the smaller building that were mostly demolished and make up the majority of the terrain.  We'll see how that plan progresses over the next few weeks of test building.  Luckily there are a lot of 3D model of the iconic stalingrad buildings which will make doing some of them accurately a lot easier.
One last point.  When doing a very specific historical game at a convention filled with wargamers one needs to go into it with a rather thick skin.  No matter how much research goes into a game, you'll get some detail wrong and given the nature of the audience there will be someone there who will both notice and feel compelled to point it out, often in less than graceful ways.  For the most part these fault finders are trying to be helpful in their own special way but they just don't understand they may be the 8th person to remark that the brick coloring for the Grudinin Mill is 2 shades too dark or just don't have the communication skills to not come across as an ass.  My advice is to just assume positive intent and move on.  Remember one thing - while they may be criticizing an aspect of the game presentation, they didn't actually put the game on so who really cares what they think.   One of my business maxims is that any idiot can point out problems and reasons not to do something but there are precious few who actually try and do.
Posted by Miles at 6:52 AM

Miles, this is an excellent project planning post! Very interesting.

Incredibly ambitious project; I am really looking forward to following this.

Maybe you could construct some step risers to place on the floor on each side of the table so that if a player needs to reach to the center of the table he can do so without mashing any terrain.

You could flip the risers over and use the space inside them to hold terrain whilst taking the game to the show.

I like the idea os building step boxes. I will need to build some form of box for transport. I’ll give that a good “think” - thanks for the idea.

It will also help with younger players!

A most excellent project Miles. I look forward to seeing it being created . I entirely agree with the latter sentiments , Do’ers do .. whiners whine . Just let them move on by to the next table!

Model railroaders often will put a plexiglass "edge" at the boundaries of their railroad to combat the lean in. At the very least it makes operators more aware of the possibility of crushing things before it actually happens. Not sure if that would be a reasonable solution in this case, especially if it will be traveling.


Hi yes we tried this campaign as well...in 28mm

We had to scratch the factory...and make it slot into place for storage.