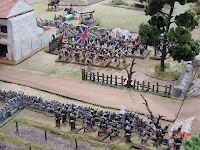 I recently joined a local gaming club, the Ellicott City Association of Miniature Gamers Association or ECAMGA for short. It’s a loose group whose main goal is to have fun and I’m grateful that they lowered their standards and admitted me. I was able to attend a few games of 28mm Napoleonics and was amazed by how great these models look on the table and how much fun the game was.

Each side had close to 1,000 miniatures each arrayed across a 15 foot table with absolutely fantastic scenery. As for the miniatures, themselves, the vast majority are Perry Brothers and painted to a very high standard, indeed. The members of ECAMGA are both great modelers and a lot fun to play with. My apologies for a lack of photos of the games, but I was having to much fun to snap off a few pictures.

We were playing a homegrown ruleset that was based around event cards and command control. I must say it was easy to learn and a lot of fun. During my first game, I had command of the British left wing, which consisted of 3 infantry brigades. I spent most of the game cowering on the reverse slope of a hill after I learned that infantry in column formation and enemy artillery batteries are a volatile combination. I did have a blast and enjoyed meeting the club members.

I saw more action in my second game, where I again commanded the left flank, but this time for the French. My orders were to seize a town and bridge from the dastardly British. For this endeavor, I was allocated 4 brigades of infantry, 1 of dragoons and 1 artillery battery. Of course, the ECAMGA members on my side were gracious to the “new guy” and allocated me most of the elite troops. This impressive force was able to seize both the town and the bridge and win the game! Of course, I did out number the opposing British by almost 2 - 1, they had some atrocious luck, and I was given a “do-over” at a critical point, but a win’s a win! Besides, I’m pretty sure the loss column will balloon in size once the “be nice to the new guy” stuff wears off! Never-the-less, I had a great time and really enjoyed getting to know some of the club members better.

My experience with the club has reinforced one of the prime motivations for my switching hobbies from model rail roads to miniature gaming - social interaction. Outside of conventions (which I rarely attend), I found MRR to be enjoyable from the craft perspective but a rather lonely hobby, especially after my son lost interest in running trains with Dad (oh, I do miss the Thomas the Tank Engine days). Miniature gaming features the same craft aspect but has a much higher degree of social interaction - playing a game is a lot more fun (to me) than watching trains roll around a track. I don’t really care that much about who wins or looses the match but the aspect of competition and the human “surprise factor” is very interesting and fun. Don’t get me wrong, I still like model rail roads, especially garden ones (G scale) but that hobby will now need to share time with gaming.

I have the strong feeling that 28mm Nappy’s will be in my immediate future as the next army to build. Hopefully, I can figure a way to create a campaign that links the Trafalgar rules and the ECAMGA house rules for a series of amphibious battles.