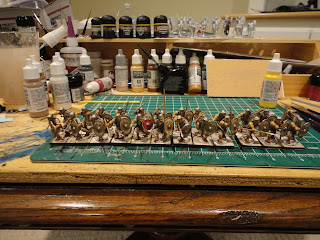 More progress on my Imperial Roman Army.  The first Auxiliary Infantry unit has been completed.  Again these are the plastic Warlord Auxiliary figures and they build and paint nicely.  As mentioned in a previous post, I had some issues with the sizing of the Little Big Man shield transfers and decided to use the shield decals provided by Warlord.  The decals look fine.  It appears that the LBMS shield transfers are for the metal Warlord Auxiliaries whose shields are a tad larger than the plastic ones.  One drawback of the plastic auxiliaries is that there are no command figures.  I did a minimalist job to convert one figure to a standard bearer and another to a commander (using a smaller shield).  A bit dodgy, but it will work for now. 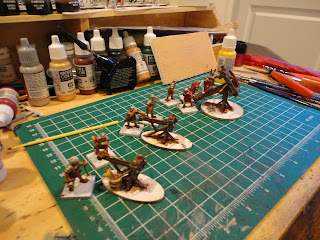 I also finished the Warlord artillery box set.  I really like both the metal crewman and the resin scorpions and ballista.  They went together easily although there was a good bit of flash on the figures.  I will "dress-up" the artillery pieces with some elastic thread between the torsion arms and payload. 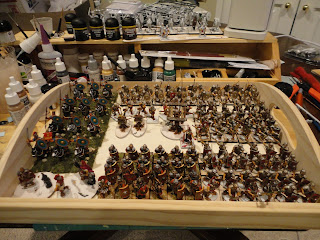 Here's the army as it stands now: 3 Cohort's of Legionnaires (24 figs each), 1 24 figure Auxiliary Infantry unit, 1 12 figure Auxiliary calvary unit, 1 Ballista, 2 Scorpions and two command stands.  It's a total of 120 painted figures which is a nice starting force for WAB.

I've got enough plastic figures to flesh out 2 more 24 man cohorts and 12 more Auxiliary calvary (you can see them at the back of the picture).  My next step will be to scenic the bases of the painted figures and try them out on the tabletop.  All-in-all, it's been great fun building this army and not bad progress for 2 months.
Posted by jmilesr at 8:51 PM

"Not bad progress for 2 months"!!! Mate that is fantastic and the troops are looking brilliant. Cant wait to see them in action.
I see you mentioned WAB, it will be interesting to see what the new rules coming out will be like. I envisage we wont have to change the basing otherwise I'm staying with WAB. They are a great rule set by the way.
Cheers, Guido.

iles - the Auxilia are the best unit yet - they look good!

Holy Cow! That is a lot of fine work for the short time, and what impressive results. Dean