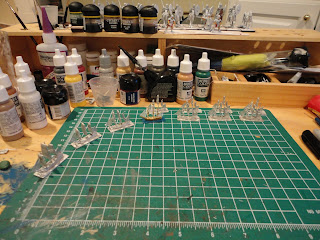 I needed a break from painting 28mm Romans, so I decided to descend in the lead pile and pull out something different.  Almost two years ago, I picked up a copy of the Napoleonic naval ruleset "Trafalgar" and a couple 1/2400 Figurehead Starter fleet packs.  Each pack has 11 ships - 1 120 gun, 1 100 gun, 1 80 gun, 4 74 guns, 1 64 gun, 2 40/35 gun and 1 20 gun sloop.  It's a nice little force.  I assembled one of the fleets and painted a 74 gun ship - the yellow hulls indicate these will be British.  The ships consist of a base, hull, main mast and rear sails.  While they look a bit fiddly, the ships go together very well and have very little flash. 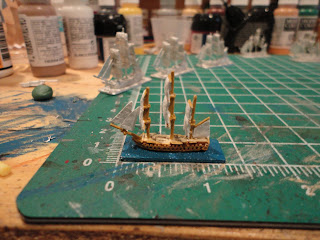 Here's a close up of the painted 74 gun ship-of-the-line.  The ships paint up well and have a good deal of detail despite the tiny scale.  I used the painting instructions that are in the Trafalgar ruleset and then washed the model with some Army Painter "light tone".  I think it looks pretty good.  The effort required to paint a ship is about the same as if takes to paint either 2 28mm infantry figures or one mounted one.  I think I can finish up the fleet in a week or so.  My playing surface is 8x4 feet, so that will afford a lot of room for large fleet battles in 1/2400. 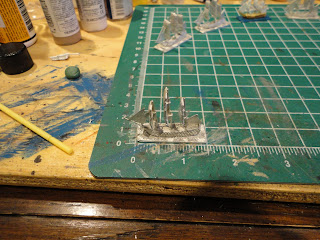 The third picture is a close up of the unpainted 120 gun First-Rate ship-of-the-line.  As you would expect, it's a good bit bigger than the 74!

I did think about trying to do some minimal rigging on these models but after a few false starts I realized that was a silly idea.  I think if you squint, you can almost see the rigging! 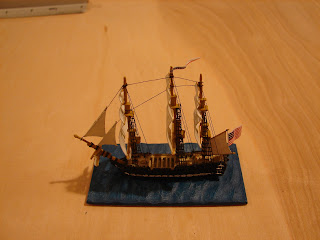 I have also built up a handful of 1/1200 Langton Sailing ships.  These Models are really superb but are both difficult and time consuming to build.  The brass sails are a particular challenge.  The one pictured is the USS Ben Franklin, a 74 gun US Ship-of-the-line.  I two others completed and have a few more to play with - these are great models for a special "duel Scenario"

They look great with the rigging, but boy, I am not sure I would go there.

Very nice model. Its always handy to have other periods to turn to when we find ourselves getting bogged down with the one we're currently working on.
I have a board game called "Wooden Ships & Iron Men" which is played on a hex board with cardboard counters. I always toyed with the idea of actually using models and hexed mats.