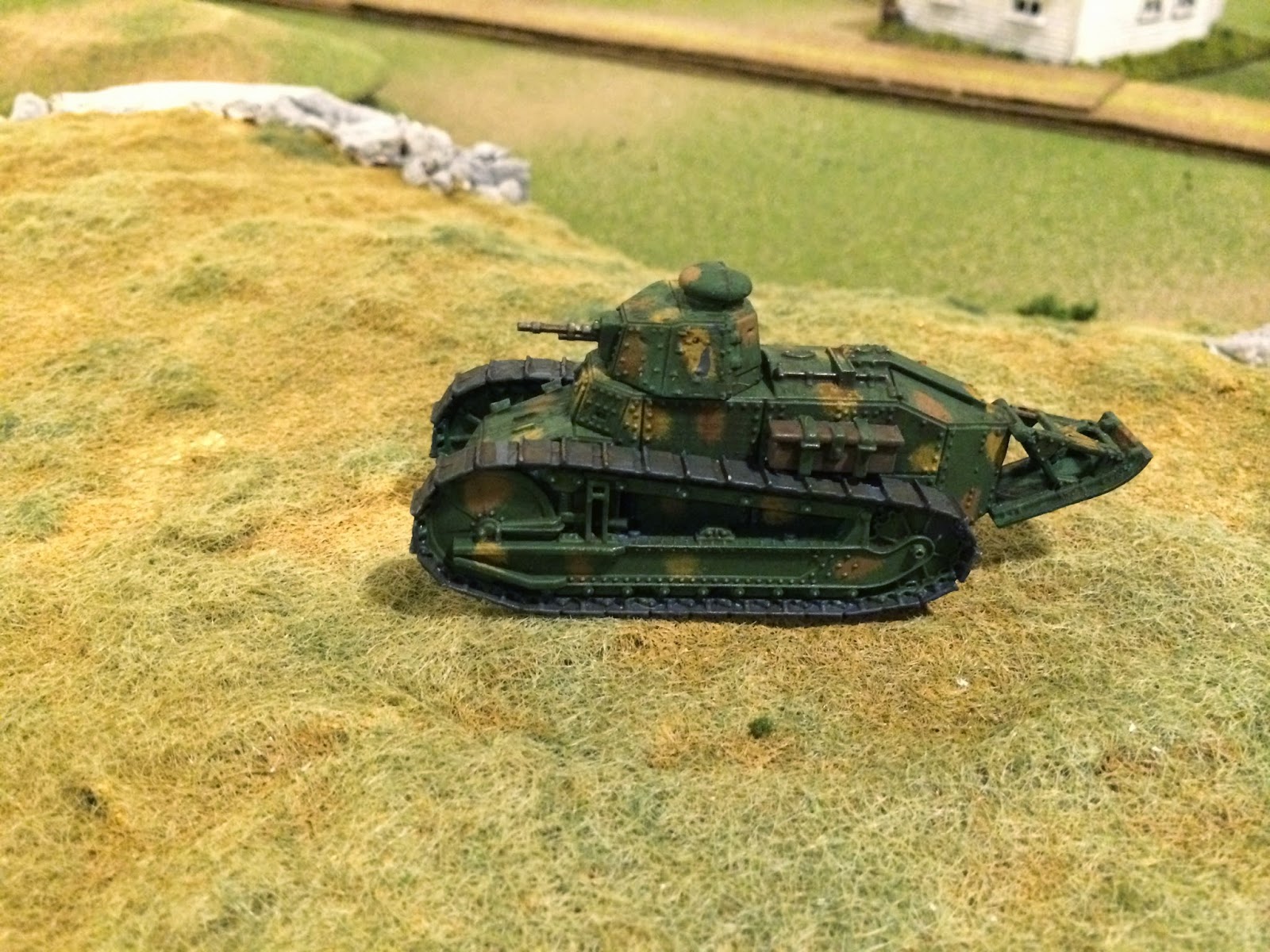 Trenchworx is a new miniature company that is currently running a very successful Kickstarter campaign for 28mm WW1 tanks.  At Historicon, one of the guys behind the company (Nate) very generously gave me some sample models to try out and all I can say is wow - these are some top notch models.  First up is the smallest of the three tanks - a French FT. 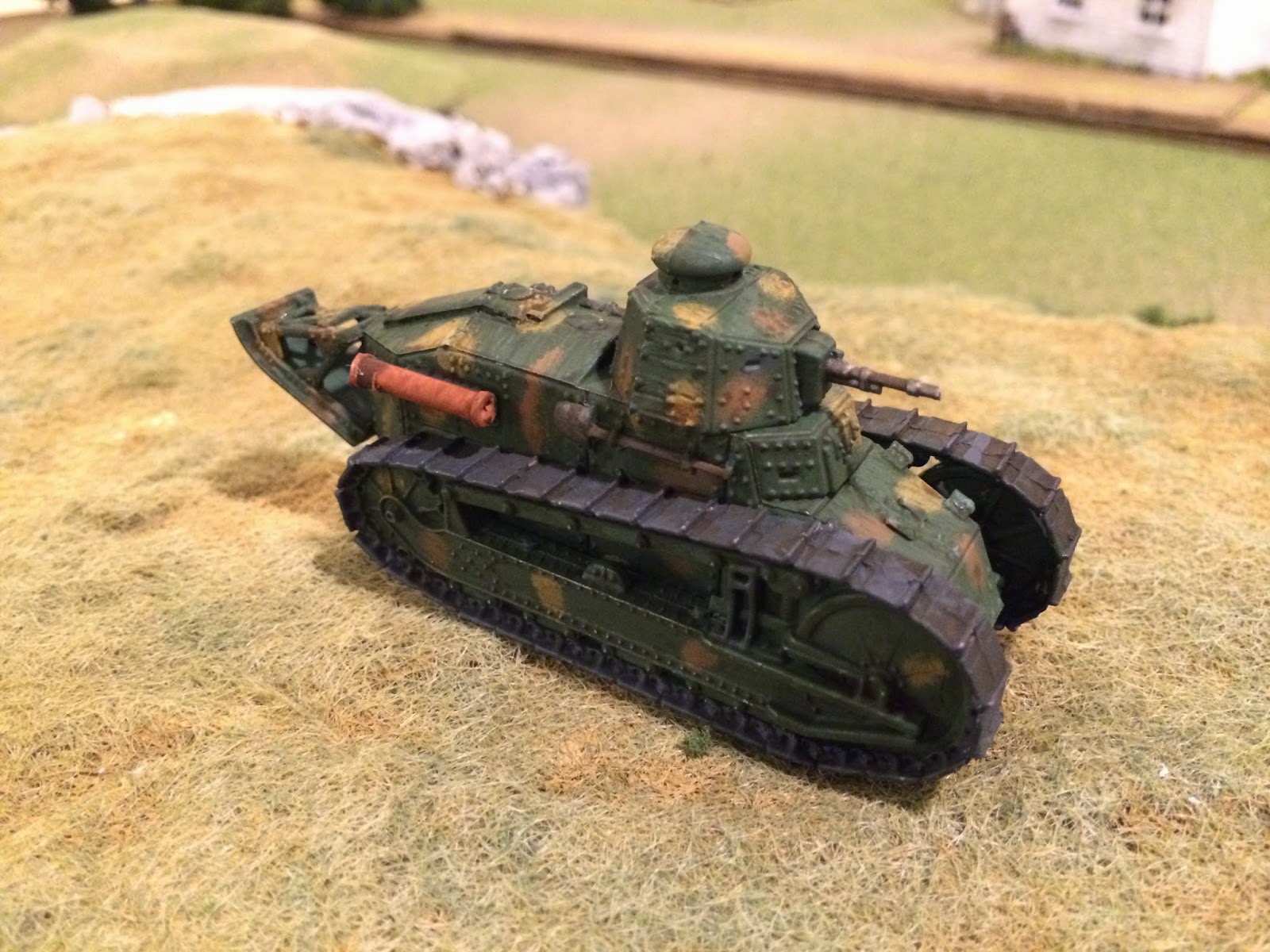 The model is resin based but comes from a master that is 3D printed - Nate is astonishingly talented with 3d CAD design and these models are proof it.  The French FT kit comes with 11 pieces - a body, two track sections, the skid assembly and two gun options - a machine gun (which I used) or a light howitzer.  All of the parts were flash free and had no defects (as in none). 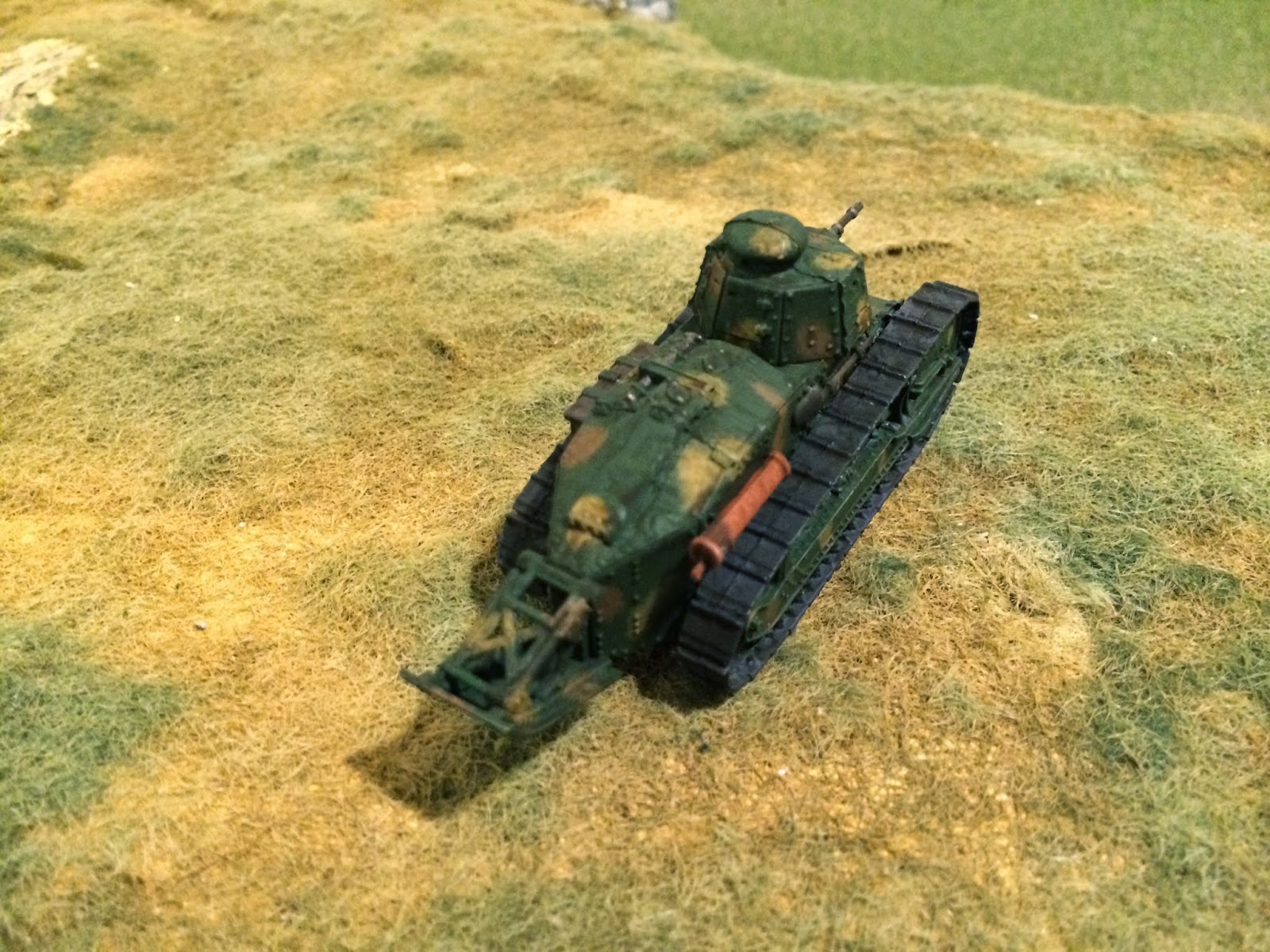 I primed the model with grey auto primer and then made up my own camo scheme.  Decals will be added later when I figure out what nationality will use the FT.  Assembly, priming and painting took less than 90 minutes. 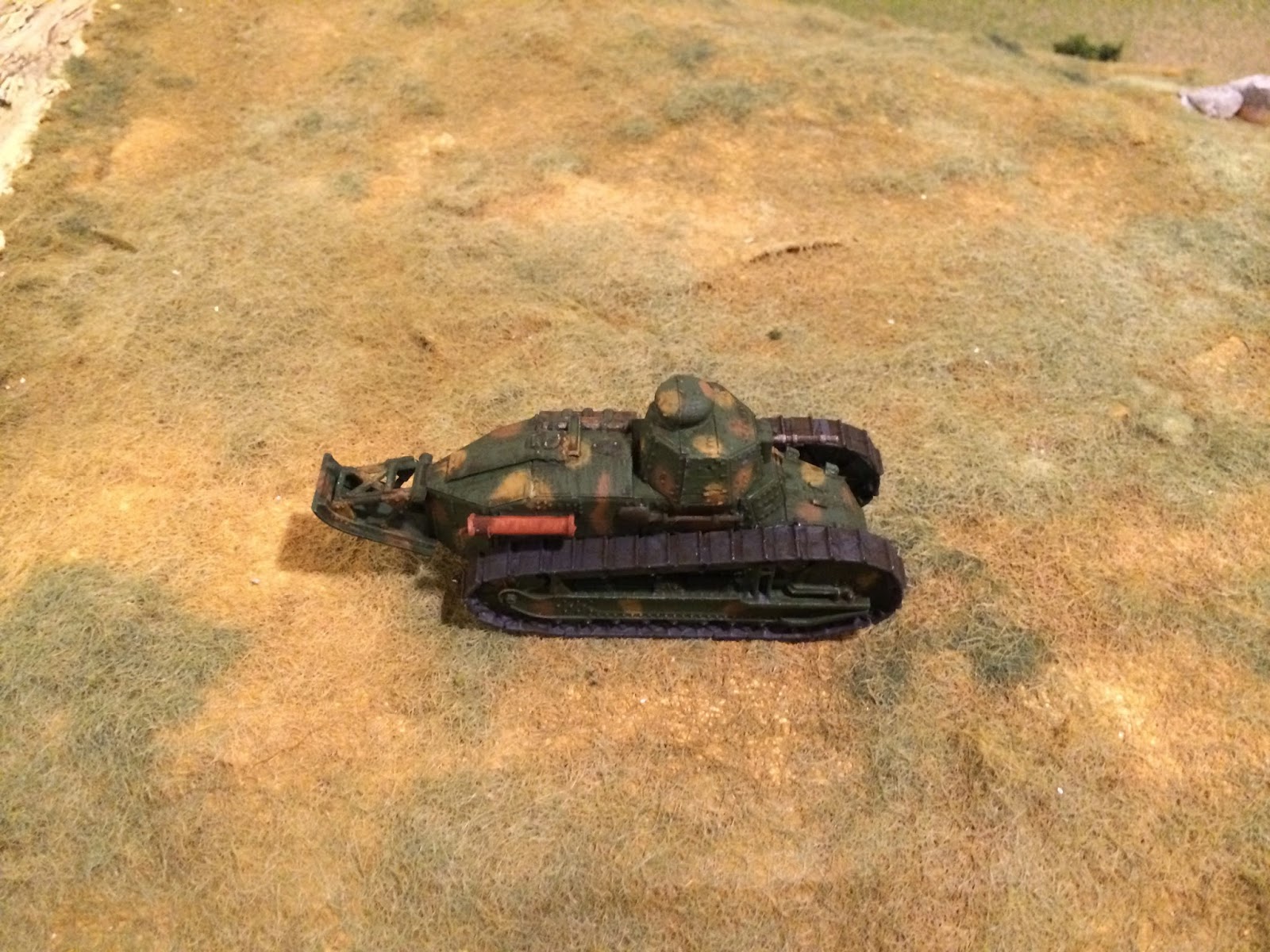 I do have some experience with some of Trenchworx other products - namely the Japanese Type 97 Tankettes.  I have a blog post on the tankettes which can be seen here. 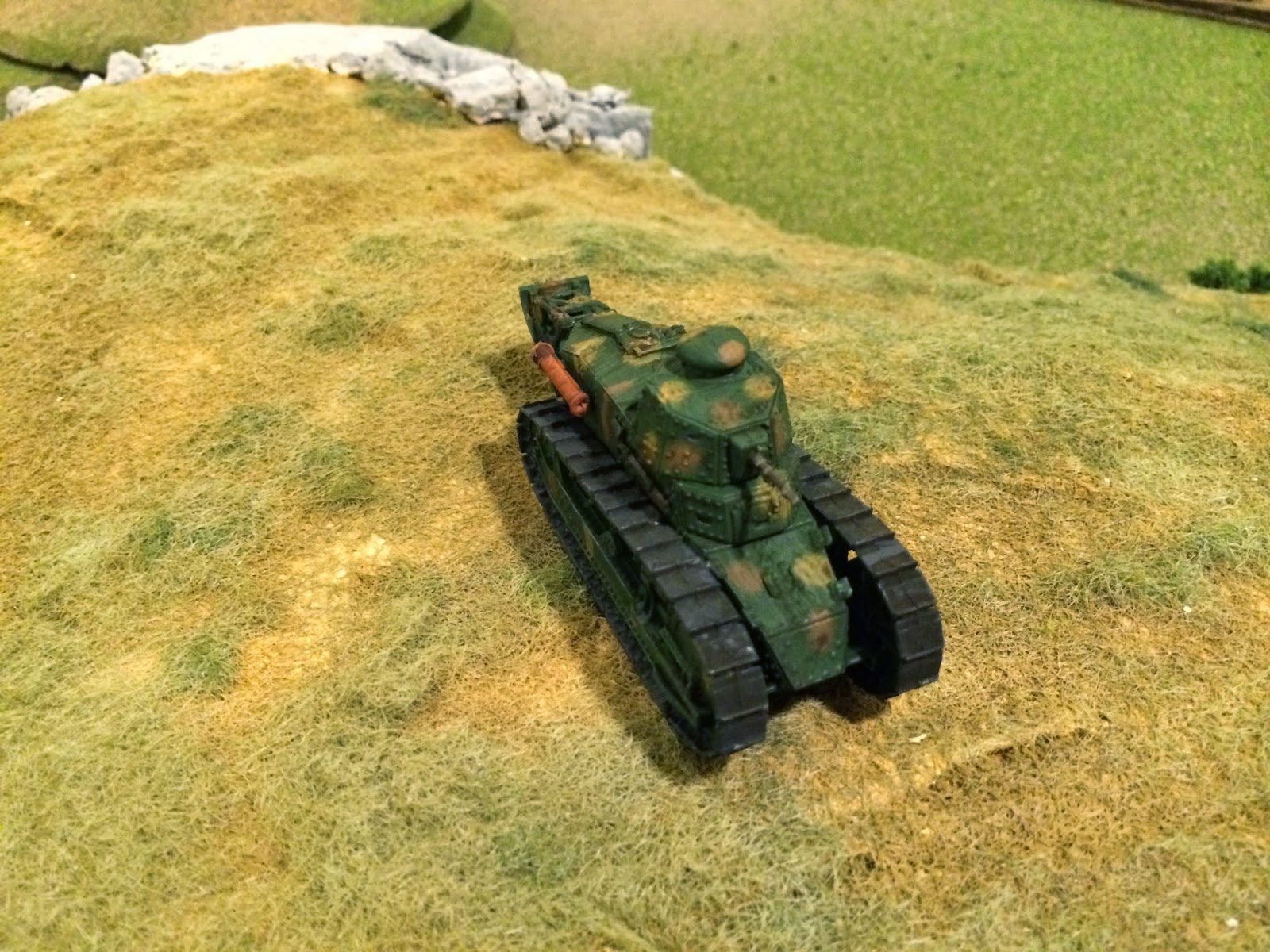 This model was a pure joy to both build and paint up and I really can't recommend it more.  In fact Trenchworx has now replaced Blitxkrieg Miniatures as my favorite provider of top notch 28mm scaled vehicles.  I can't wait to get started on the British and German models I've got.

I was very grateful to receive the demo models and can't wait to get started on both the British and German tanks - which are big beasts indeed. You can get a peek at the British tank over on the Bolt Action.net 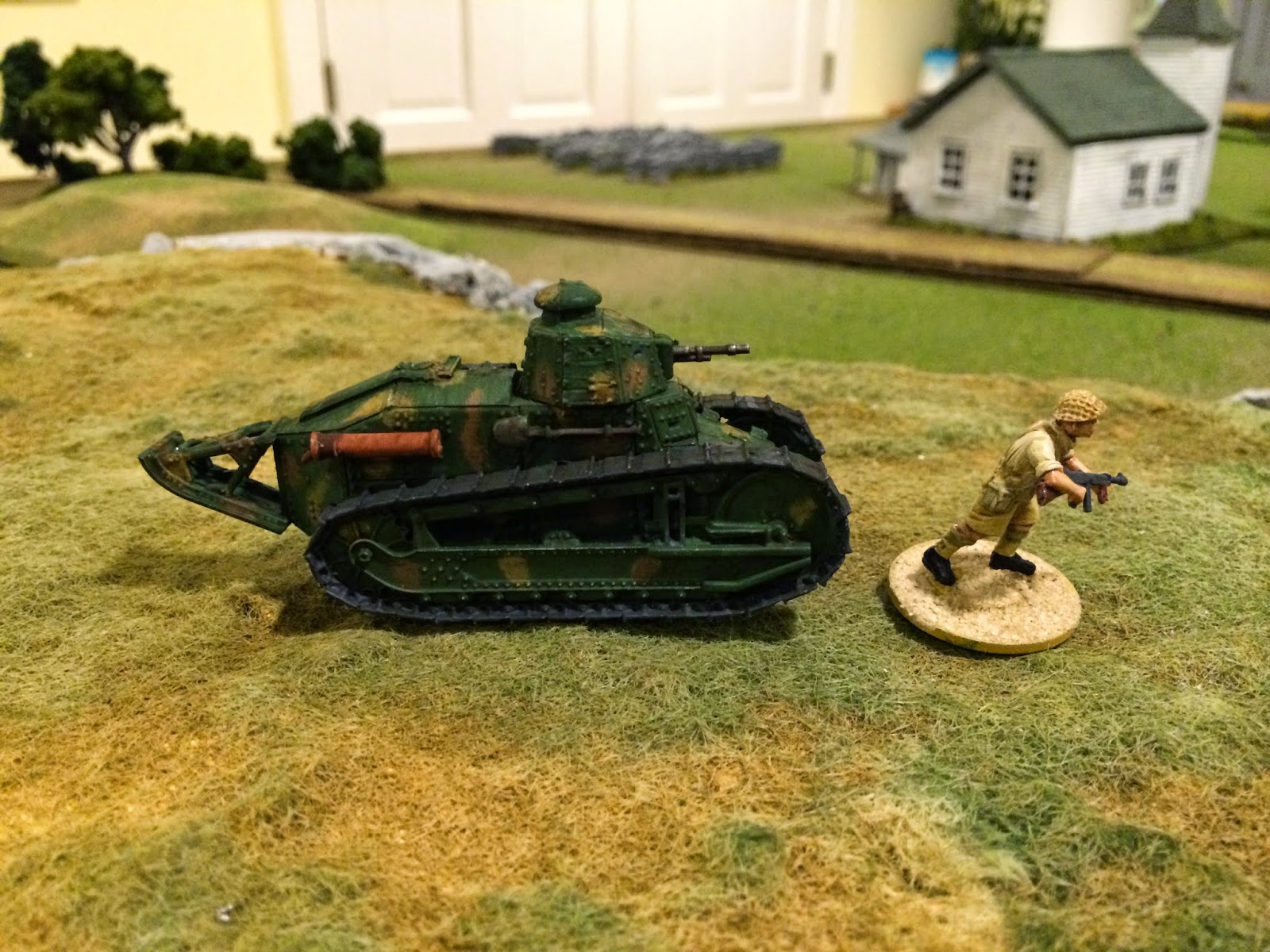 As for scale, here's a shot next to a 28mm scaled Perry British figure - the FT was a tiny tank and it's model reflects that well

Trenchworx has a e-store up and running where you can get some of their ww2 stuff.  I highly recommend these models and the kickstarter.  Give them a try, I doubt you'll be disappointed.

Nice work on that tank, Miles.
It looks very well. I didn't think that 3D printed prototype lead to such good results...

It is a great model, I have one also!

We're truly living in golden age for wargaming! There's so much goodness already on the market with much more still to come... if only time and money would permit :-)

I've never participated in a kickstarter before but having seen these in person, I promptly ponied up. Yours looks amazing, jmilesr!