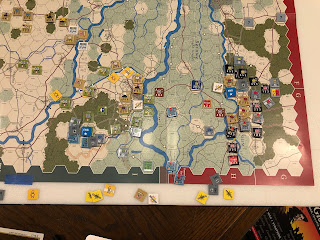 30 Corps continues to reinforce the assault on Nijmegen.  They also get an engineering unit along the bank the Waal river allowing the 82nd airborne to cross and support an attack with the poles that cuts-off Nijmegen.  The attack on Nijmegen wears down the garrison but it is still holding out.  With their access to reinforcements effectively cutoff, their days are numbered.  At Arnhem, the Germans continue attacking the same 2 points but roll 1's - their dice luck has been atrocious this turn in the North. 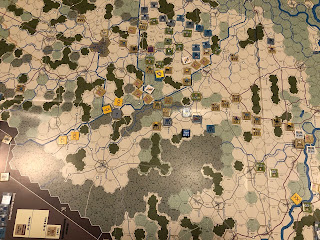 With the Panzer Brigade's attack in the south stymied, the Germans FJ's launch a desperate final attack and succeed brilliantly - the cut the highway again, which means all of 30 corps to the north is out of supply and attacks at half strength. 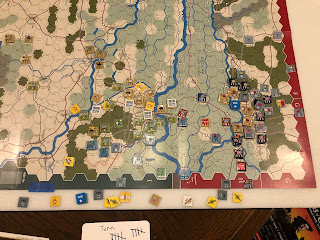 Despite being out of supply, 30 corps renews its attack on Njimegen and the worn down garrison succumbs - 30 Corps is across the Waal River in strength.  Two battalions of tanks are detailed to beat back the southern German attack, which they do.

At Arnhem, knowing the rail bridge is really the only bridge the germans can recapture, fresh, full strength troops are moved into the line, including one of the Polish battalions to replace the worn down paratroopers.

The Germans attempt to attack the now stronger British/Polish garrison at the rail bridge and fail to dislodge them. 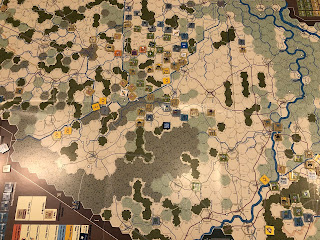 The most recent incursion into the Highway is beaten back with severe losses to the Germans.  It's doubtful they can be of any major threat in this sector. 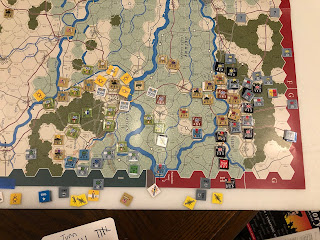 30 Corps continues the advance towards Arnhem and the not one but two bridges held by the Brit and Polish paratroopers.  They have reached the banks of the Rhine.

One last attempt is made to retake the railway bridge but it fails as the results is an exchange. 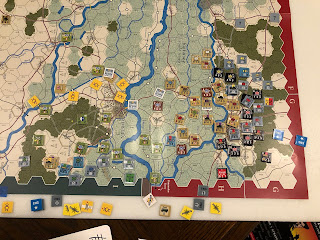 30 Corps has moved 5 battalions across the Rhine and is moving up artillery to support the enlargement of their bridgehead.  A quick check of the games victory conditions indicates the allies have achieved their needed 10 VP's and the germans concede.

Market Garden was a resounding success (at least in this game).

Well that was fun (for me).  I'll do a full review of Holland'44 in a few days but I really like the game and look forward to trying it against a real opponent over vassal or even, one day, in person.

Playing this game was very nostalgic for me and I'll likely do another one (maybe Paths to Glory?).  After really not looking at board wargames for 30 years, I am amazed at the selection and quality of titles are available.  I guess my assumption that wargaming died when SPI went under was a bit off-the-mark.
Posted by Miles at 7:25 AM

Email ThisBlogThis!Share to TwitterShare to FacebookShare to Pinterest
Labels: Holland'44, Solitaire Play Through

really loved reading these reports. sounds like a grat game