The Battle of Fuentes de Onoro 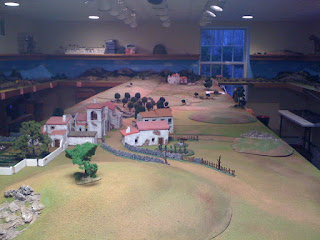 Last night the ECAMGA club refought the battle of Fuentes de Onoro in a rather grand style.  You can see the table to the left which was about 18' long and 6' wide.  The French had over 1,000 figures and the British/Portuguese had around 800-850.  Each side had 4-5 players and an overall commander.  In a demonstration that merit and command are sometimes be disconnected, I was chosen to be the French commander, which meant I could come over to see the battlefield the day before to plan my strategy.  I was very fortunate that the players who selected the French side had a high degree of tolerance for incompetent command.  I decided to consult my son, Sean (14), for advice on strategy and he jumped at the chance to write up a plan for me.  In typical fashion I was presented with an 8 page power point deck that outlined our plan of attack. 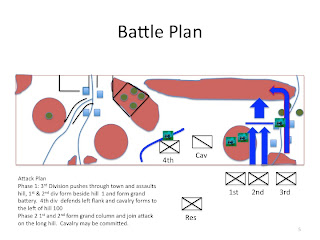 It was a simple plan that involved throwing everything at the right flank and holding the left flank.  There was some cunning in his strategy as the last page of his strategy deck contained a false plan that was the mirror image of the real one with instructions that I lay the deck down in the view of my opponents a few times during the organization phase.  The scenario had all of the units starting off the board so a subterfuge on setup could prove important.  I do worry that Sean's sly strategies may bode ill if ever he decided to be a rebellious teenager. 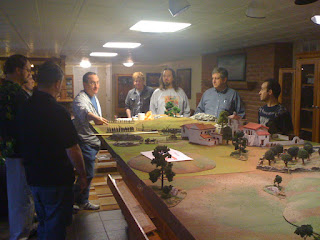 Most of the players for this evening's game were new to the system (which is a house set of rules that are simple and fun (no dice, but command cards for random events) so there was a training session to start with.  It's a motley looking crew to be sure.  You can see the "false" plan in the lower center.  The game room we play in is very impressive and it's a real privilege to get the opportunity to push around toy soldiers there. 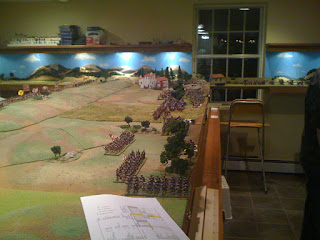 The Battle Begins:
After two turns you can see the French line forming up on the right side.  The British are fairly evenly distributed across the whole field but most of there elite troops are deployed on the far left.  Perhaps our ploy has worked? 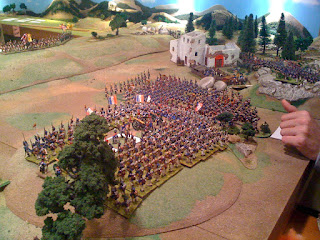 The Main Attack Forms Up:
3 Divisions of French Infantry get organized for the attack.  The 3rd division moves through the town to the far right while the 2nd and 3rd Divisions form up into grand columns for the attack.  The attack is supported by a grand battery on the hill and another gun section near the town.  We've concentrated about 60% or 650 figures of the French army here. 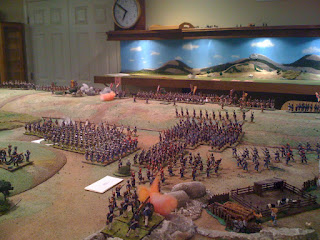 Contact:
The 2nd Division's column is just about to make contact with the British line.  Just off to the right of the picture s the 3rd division which is forming up to join the assault.  To the left is the first division which is planning to make contact in a few turns.  The 2nd divisions attack proved to be very successful and swept the British from the hill.  All three divisions then wheeled in place and prepared to move up the line. 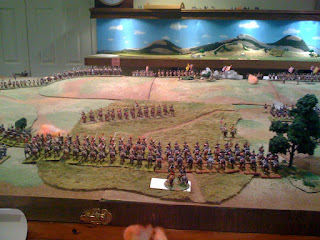 Seesaw Calvary Action:
In the center there was a very fun Calvary fight - the picture at the left shows the state of affairs just at the start of it.  2 brigades of British calvary charged the exposed french dragoon unit in the center of the picture.  Their charge routed the unit, but there momentum carried them into the big carabiniere unit which they essentially bounced off and all units ended the turn disordered.  The next turn the french calvary commander charged his untouched Cuirassier unit into the disordered British calvary and routed them from the table.  Our game system features command cards which players can play on either their forces or their opponents and the British player decided to play a "commander shot by a stray round" card which killed the Calvary commander and forced the cuirassier unit to draw a Calvary morale card.  Most morale cards say things like "stand, shaken", "move back 100 paces", or rout" but every now and then you draw one that say charge nearest enemy and that was the case last night.  The Cuirassiers raced off to charge the British line and managed to sweep a few infantry units off the table and essentially cleared out the British center. 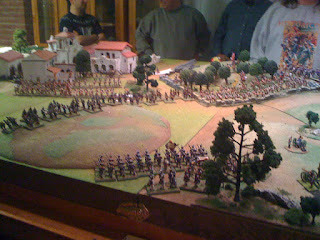 The Left Flank Desperately Holds
On the left flank the 4th division was assaulted by the bulk of the British army and took horrendous casualties but managed to hold them off long enough for the main attack to drive home.  The player who commanded this unit, Joey, was a great sport given that his command was a tough one and he had to listen to my boneheaded advice.  He also had some bad luck in card draws as his light cavalry unit charged all those British behind the stone wall in the upper right of the picture.  It wasn't a pretty outcome for the French

The game ended in a French victory and it was a grand evening.  While my role did not involve pushing toy soldiers around it was fun and I got to see my miniatures on the table for the first time.  I look forward to our next game.
Posted by jmilesr at 8:29 AM

Thanks for the report.
A fantastic table, and a very nice collection of miniatures indeed!

Very nice Miles, it looks like it was a lot of fun.

I was curious about something, I always wanted to refight this battle. I see you have 4 french infantry divisions, a cavalry division and an unknown reserve. Which part of the battle were you re-enacting? Is it the VI Corps attack on the town?

John
We're not that organized. We tried to simulate the entire battle rather than any specific aspect. I organized the french forces into separate units for each player to command and used the term "division" as a label rather than a historical unit designation.

Ernie did a great job setting the tabletop up to reflect the topography of the battlefield so that part of the game was a nice reflection of history. His scenery is amazing.

Did I see Bob Giglio in one of those pictures?

I really enjoy your battle reports and the accompanying pictures. That has to be The Ultimate Wargame Room, bar none.

It's an amazing game room and the host does a great job setting up the whole evening - a great game, dinner and, of course beer!.

His game room also serves as an excellent foil - my wife, Mary Beth stopped by during the game to do her usual eye roll and mutter under her breath "I married such a geek"- you know the usual spousal assessment of wargaming. But she did see Ernie's room and assembly of soldiers and scenery and remarked that my efforts seemed positively small scale when compared to his! Hopefully her observation will prove useful as I expand my own gaming floor space in the house....

Beautiful terrain and figures. Wow, it's better than dinner & a movie - awesome game, dinner & beer! I'm happy to see you included heavy cavalry - I plan to do the same. Thanks, Dean

I had a tear in my eye by the time I finished reading your excellent battle report.

But not because of the battle or its outcome, but your mate Ernie's beautiful games room!

You and me both my friend. Ernie's terrain selection is astonishing - 28mm Peninsular, 28mm WWII, French and Indian Wars and a Warhammer Fantasy Castle - and that's just what I've seen!

I wondered if you could tell me where the buildings in the first photo are from?

The Buildings were made by "Barb's Bunker" which is no longer in business. They are really well made and include full interiors - top notch stuff.

Guys, such tabletop battles like the one shown here ALWAYS make me envious. The excellent scenery, huge boards (stop, they're not boards, they're dioramas!) and lots and lots of miniatures...

I wish to see something like this here in Poland one day...
That is one of the dreams of Polish wargamer :)

Keep up the great work!