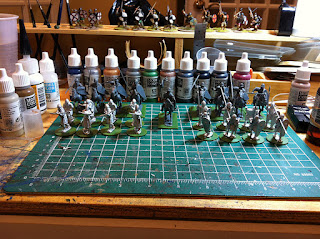 Yesterday, I finished assembling a 4 point force of Normans to go against my recently completed Vikings.  The first picture shows the whole force which consists of a Warlord, 2 mounted units of Hearthguards (elites) a unit of Crossbowman (warriors) and a unit of Spearmen (Warriors). 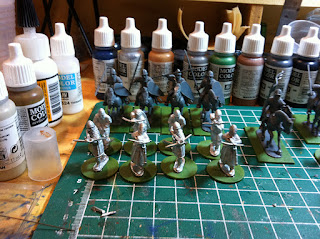 A close up of the crossbowmen and one of two mounted Hearthguard.  The crossbowman are from Gripping Beast and all the mounted figures are the plastic Mounted Normans from Conquest Games.  As you may know I'm a bit of a miniatures apostate as I actually prefer plastic figures over metal.  The Conquest figures are very nice and you have a lot of options in terms of weapons and shield style. 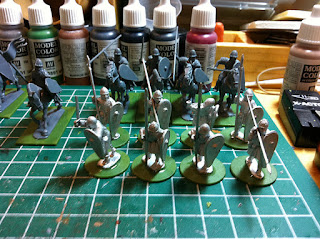 Here are the Spearman (Gripping Beast figures) and the second unit of mounted Hearthguard. 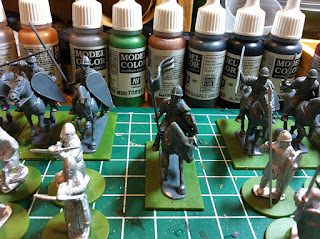 Lastly, a picture of the warlord.  I managed to pick up some of the Little Big Man shield transfers and flags for both the Normans and Vikings from Ernie over at Architects of War.  The Norman flags are really nice so I plan on replacing the plastic flag stand on the figure with some brass rod to allow for a bigger flag.

Later in the day, I primed all the figures in white and have set them out to dry for a few days.  Hopefully in a week or so I'll have the Normans complete!
Posted by jmilesr at 6:28 AM

You have been busy Miles. I'm yet to purchase a copy of SAGA, so let me know what your impressions are.
One quick question, how do the plastic Norman cav compare in size to others on the market?
Cheers.

A nice collection of minis.

I didn't realise you could play Saga with that amount of figures, thought it was about 40-50 minimum.

We were looking at the SAGA rules yesterday, good luck painting sir.

Guido - the plastic Norman Cav are a good size match with the Gripping Beast minis, so once painted they fit right in. They're cast by Renedra who also cast the Perry and Warlord plastics so the sizing is consistent.

Vladd: The warbands can be as small as 17 figures or as large as 49 for a 4 point force - the big driver is troop quality

Each unit costs a point but the number of figs goes down as quality goes up. 1 point will buy
- 4 Hearthguard (elite)
- 8 Warriors (Average)
- 12 Levys (poor)

Very Nice.. I've been having SAGA on the back of my mind for a couple months- very tempted. I'd had the same thought: use the plastic normans from Conquest, they do look good! And I'm right there with you: I prefer plastic. Quality is as good as metal in nearly all cases now, and so much easier to convert.

Looking like it will be a cool army. I have a pile of the Crusader spearmen to paint up, and am about 70% done with my plastic knights (same kit you have). I need to acquire some more archers to complete my army. Keep up the great work!

Looking great so far! Too many post around the blogosphere about SAGA. ;-) Must resist getting back into Dark Age stuff... for now.