British and French Ironclads plus a Fort 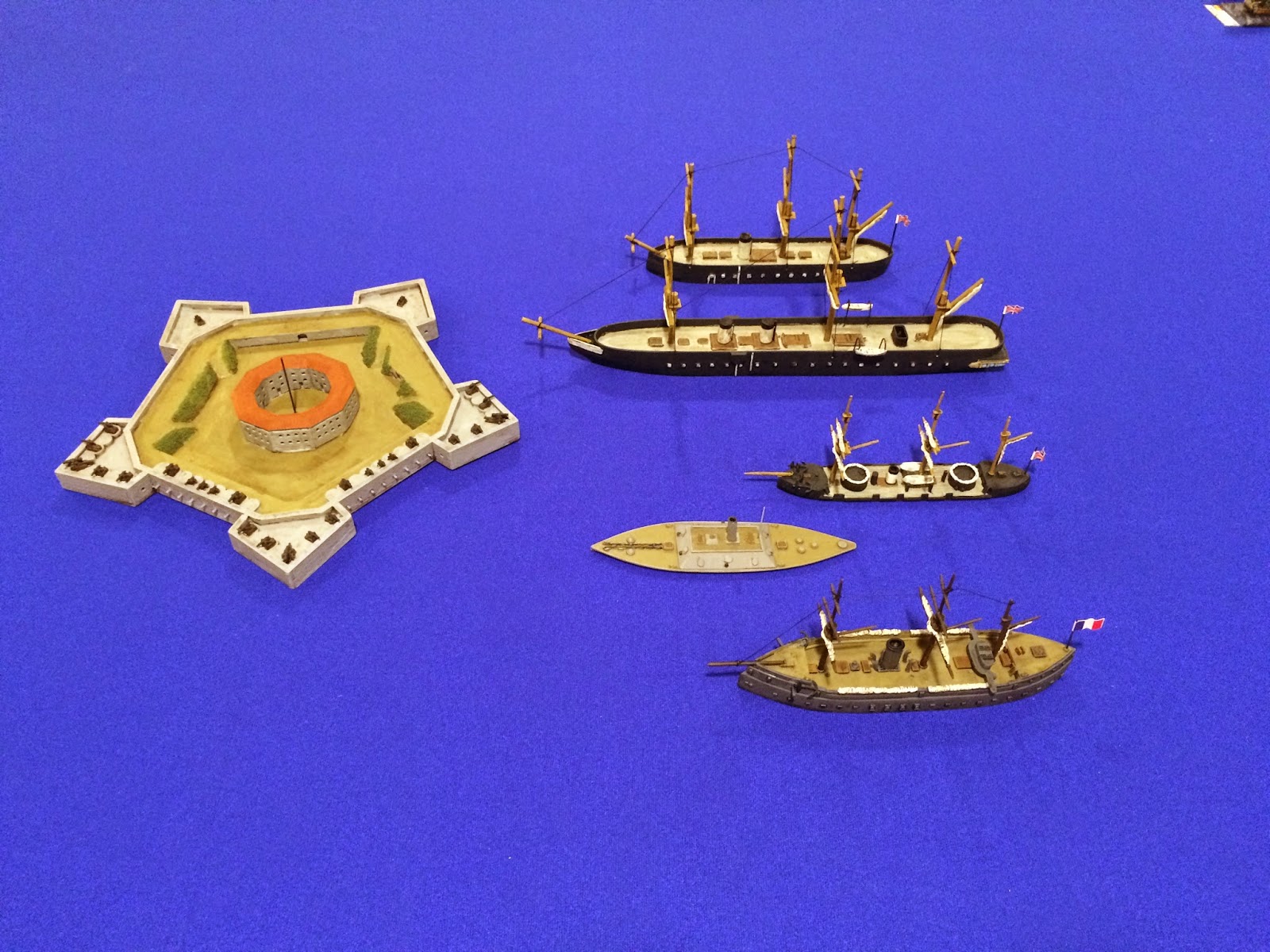 To the left are the completed ironclads and a fort that I have submitted for the Analogue Painting Challenge. 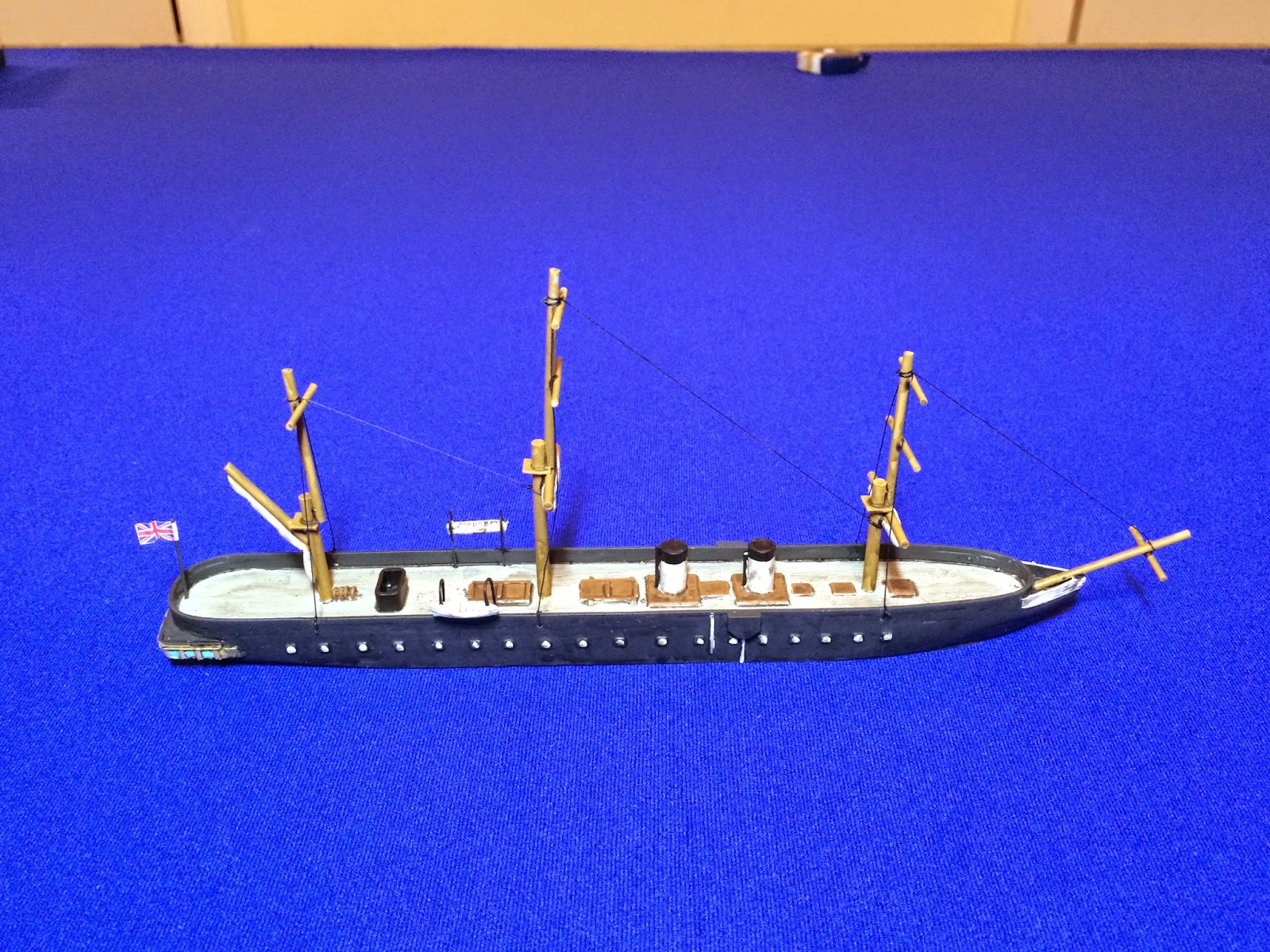 First up is the British Flagship - the iconic HMS Warrior.  The Warrior was a huge ship and this is a huge model in 1/600 scale - it's 10.5 inches long!  Like the Hector, the model is scratch built based using a rather poor hull casting for the basic dimensions.  One modeling tip - a dremel rotary tool is a great addition to the scratch builders tool kit. 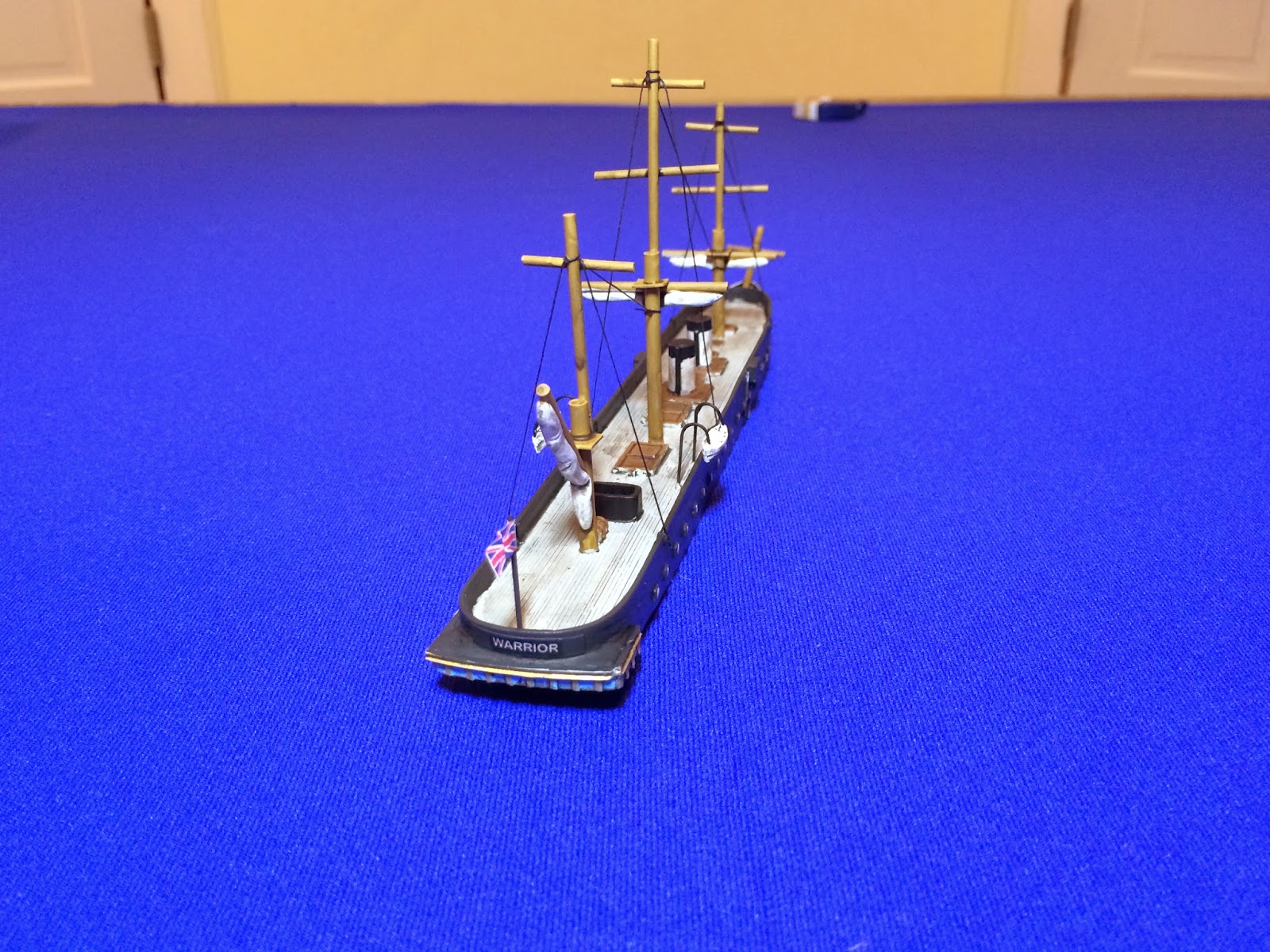 The Warrior is on display in Portsmouth and it's on my list of to do's during one of my frequent business trips to the UK.  Like the Hector, the Warrior is classed as a broadside frigate which means she was armored along the sides but her bow and stern were not.  Her armor was 114mm iron plate on top of 457mm of teak.  The ship's armament consisted of 36 x smoothbore 68 pounders, 10 x 110 pounders and 4 x 40 pounders - that was a lot of metal to throw in a single broadside. 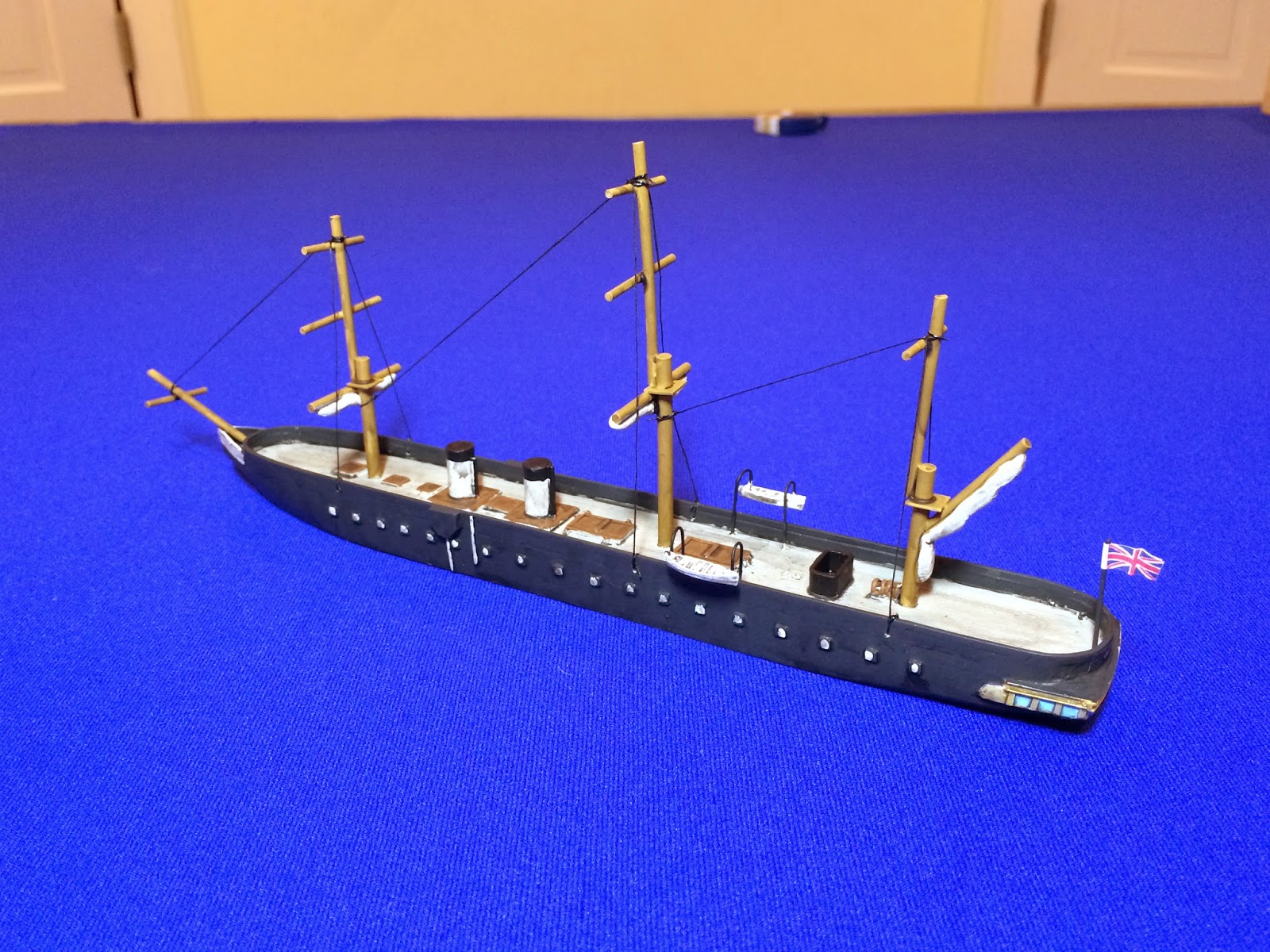 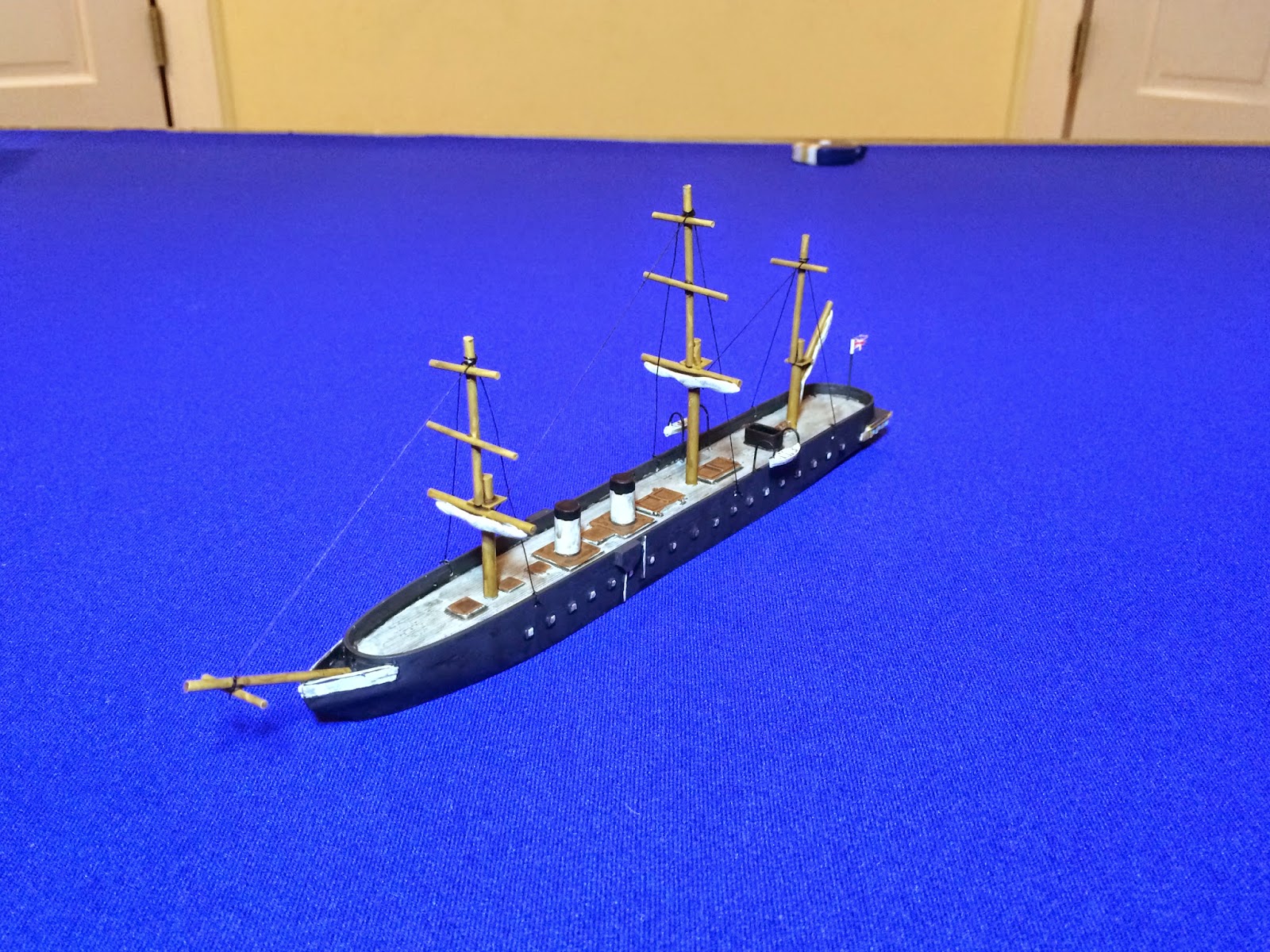 The Warrior was an extremely fast ship and was capable of sustaining 14 knots which was blazing fast for the age.  However her length and bulk limited her turning radius which could be problematic if an engagement occurred anywhere other than the open sea.

The model itself is a resin hull that's been "planked" in plastic card,  The Masts are plastic rod with greenstuff making up the furled sails.  The life boats came from my bit's box and the davits are just bent brass rod.

Overall, I'm very pleased with how she came out.  Sometimes scratch building is the only way to complete a project.  It can be very rewarding but one has to go into to it with a mindset that the first few versions will need to be redone.  Ok, in my case there might be more that a few "re-done versions"

Next up for the British is the HMS Scorpion.  The Scorpion has a very interesting history - she was laid down as the CSS North Carolina.  Unfortunately for her builders, it was illegal to sell warships to the Confederacy so they fabricated a ruse that the ship was being built for the Egyptian navy under the name "El Tousson".  During her delivery voyage to Egypt the plan was for the ship to turn to starboard rather than port near the Straights of Gibraltar and then raise the Confederate flag.  Unfortunately for the builders, the 'coppers figured out the scheme and she was seized and completed for the Royal Navy. 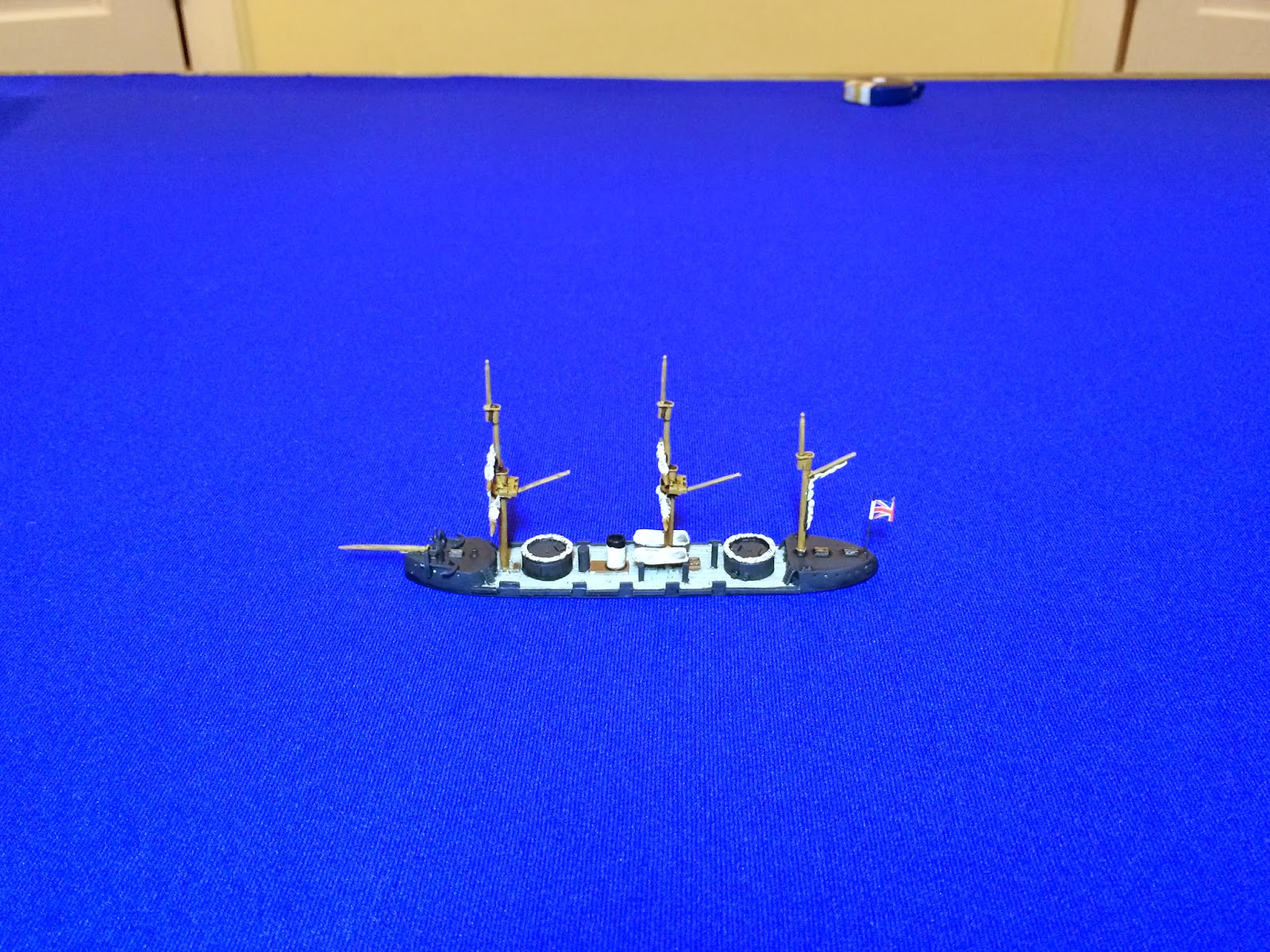 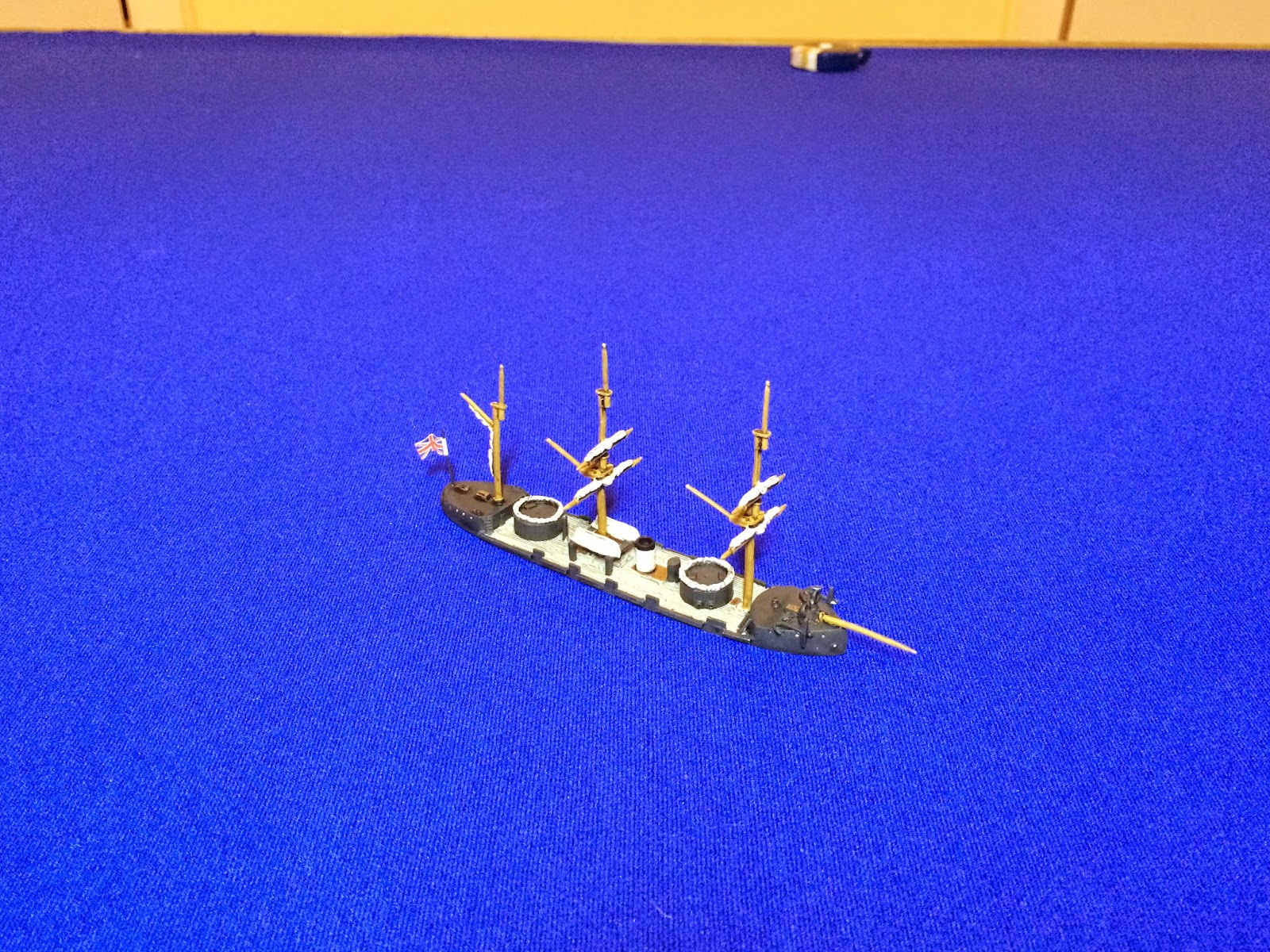 The Scorpion / North Carolina was intended to be a commerce raider but she had a very low profile which made her harder to hit but also greatly reduced her sea handling capabilities.  In fact after a few years of service the Scorpion was relegated to costal defense duties, which is the nautical equivalent of a kid being kept inside the house on a sunny day to practice violin while his friends are all outside playing baseball.

The ship was armed with 4 x 9 inch guns in two rotating turrets.  The had a relatively low rate of fire but packed a real punch and had a long range.  Speed-wise she wasn't the fastest ship afloat but could make 10.5 knots on a calm day.

The model is from Thoroughbred Miniatures and is metal.  Thoroughbred makes the best 1/600 scale ironclads available. 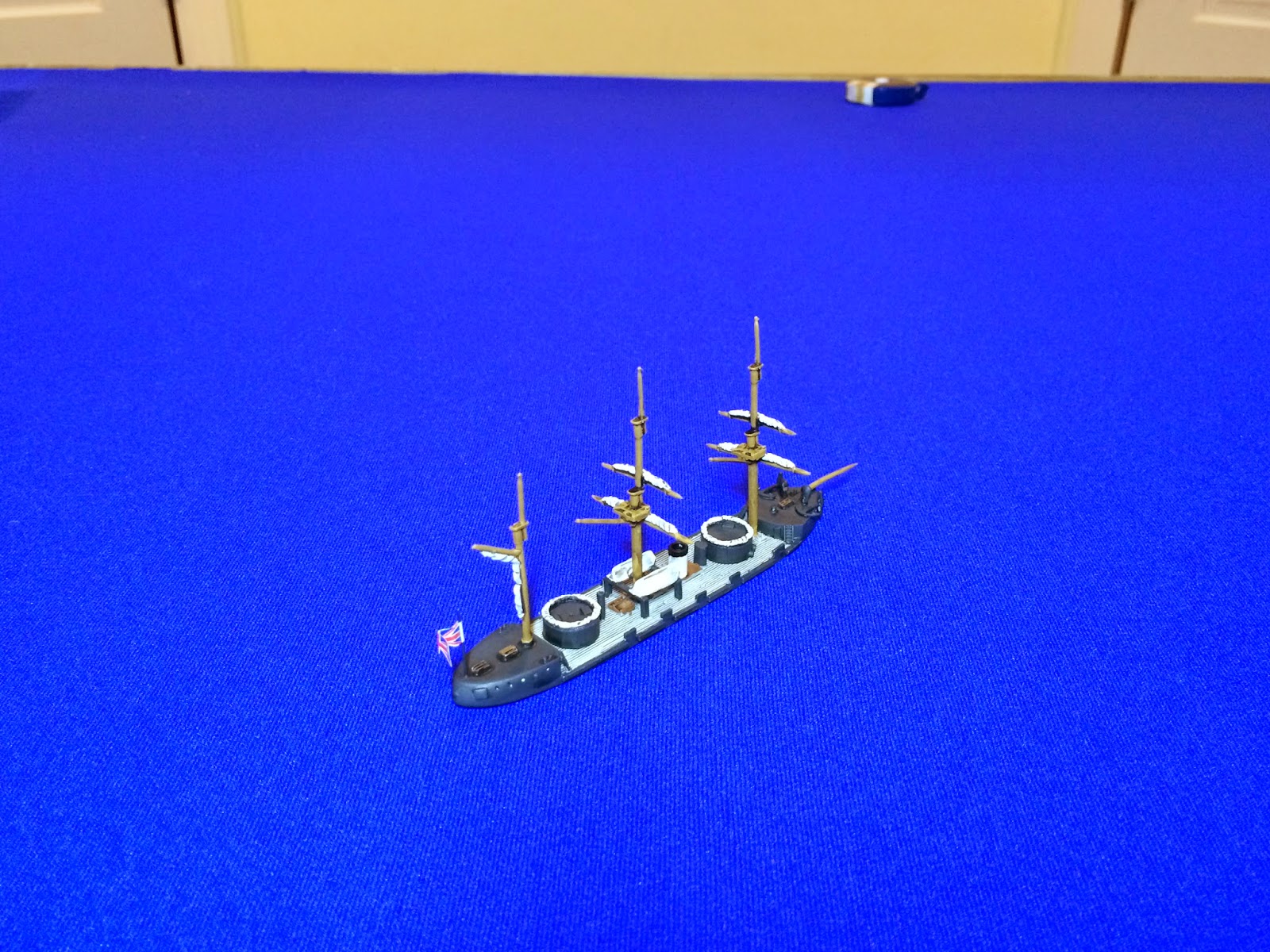 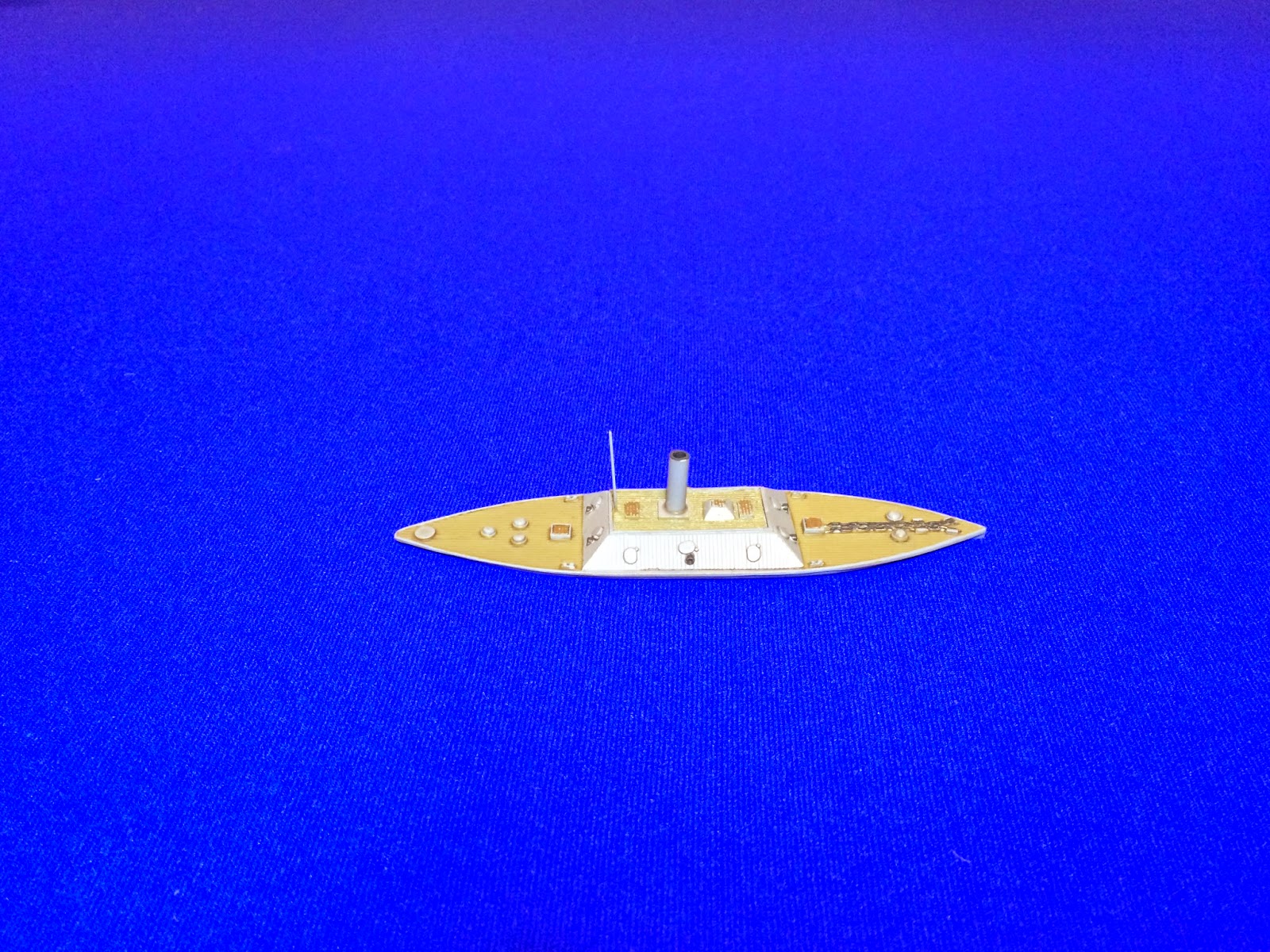 Next up the the CSS Columbia which served towards the end of the war in Charleston Harbor. She really didn't have a distinguished career, but in my alternative ACW scenario the ship maybe have a bit more renown.... 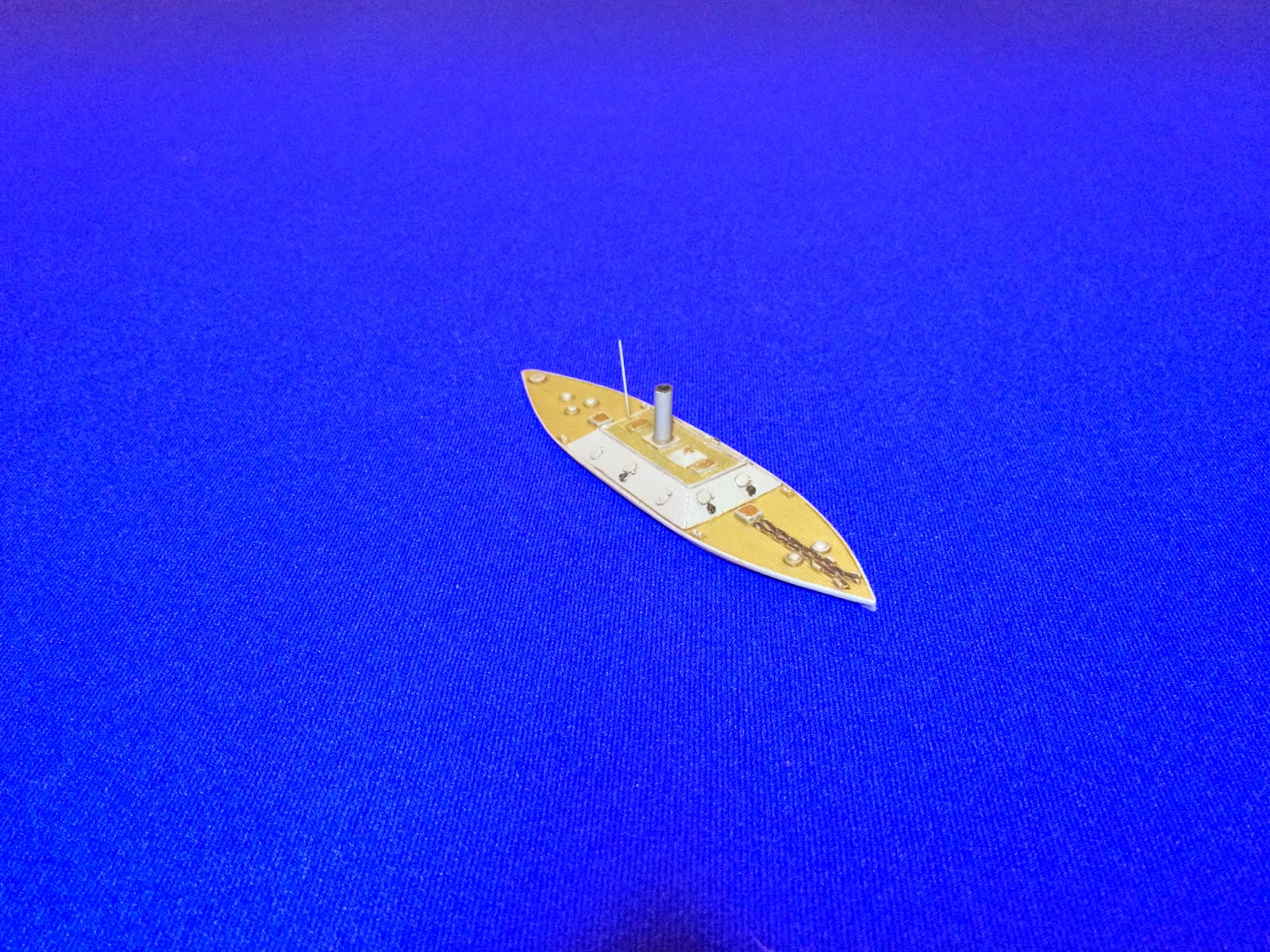 This model is also a metal kit from Thoroughbred, although kit might be stretching the definition as one just has to glue on the mast and smokestack and its' done! 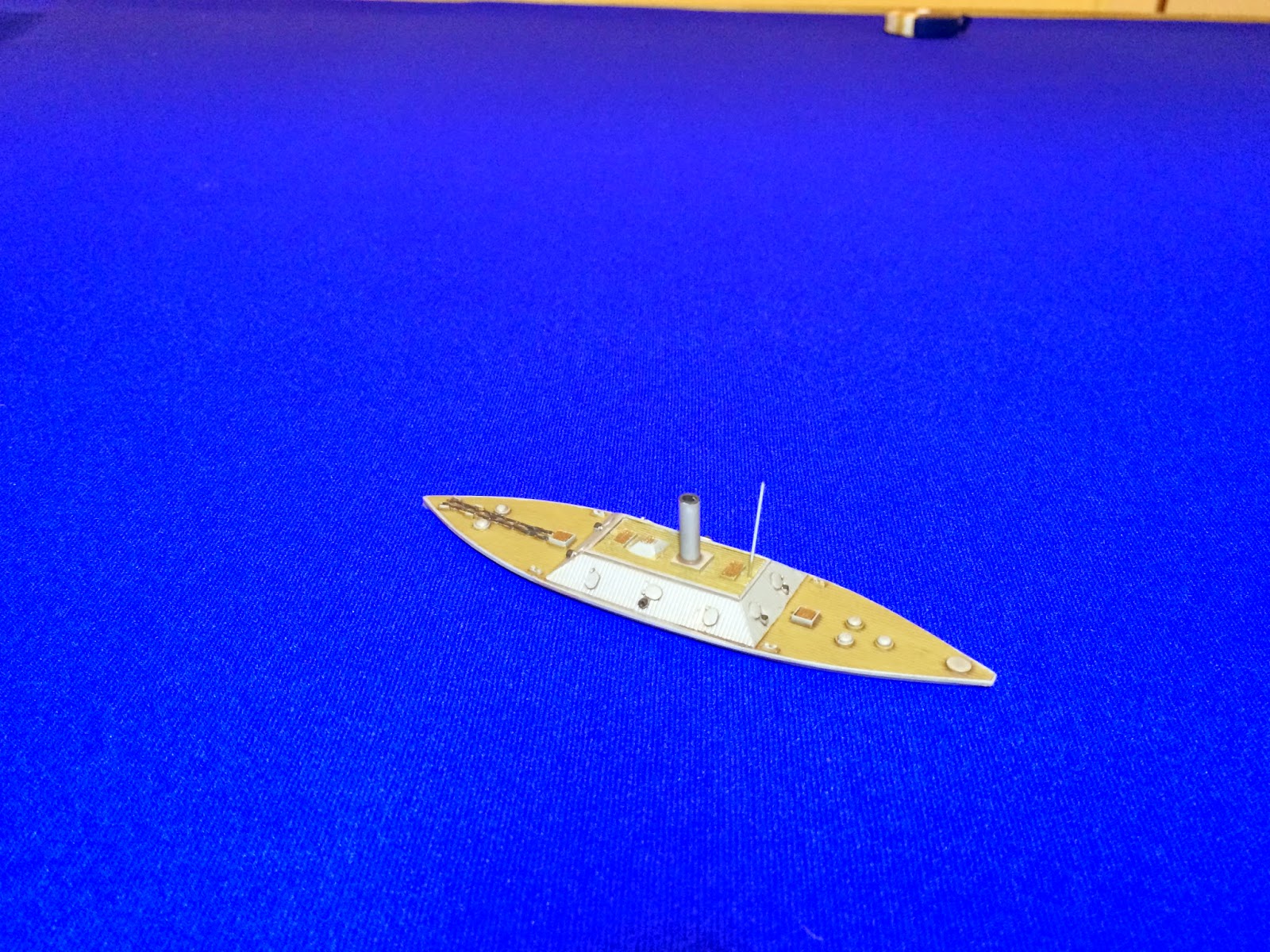 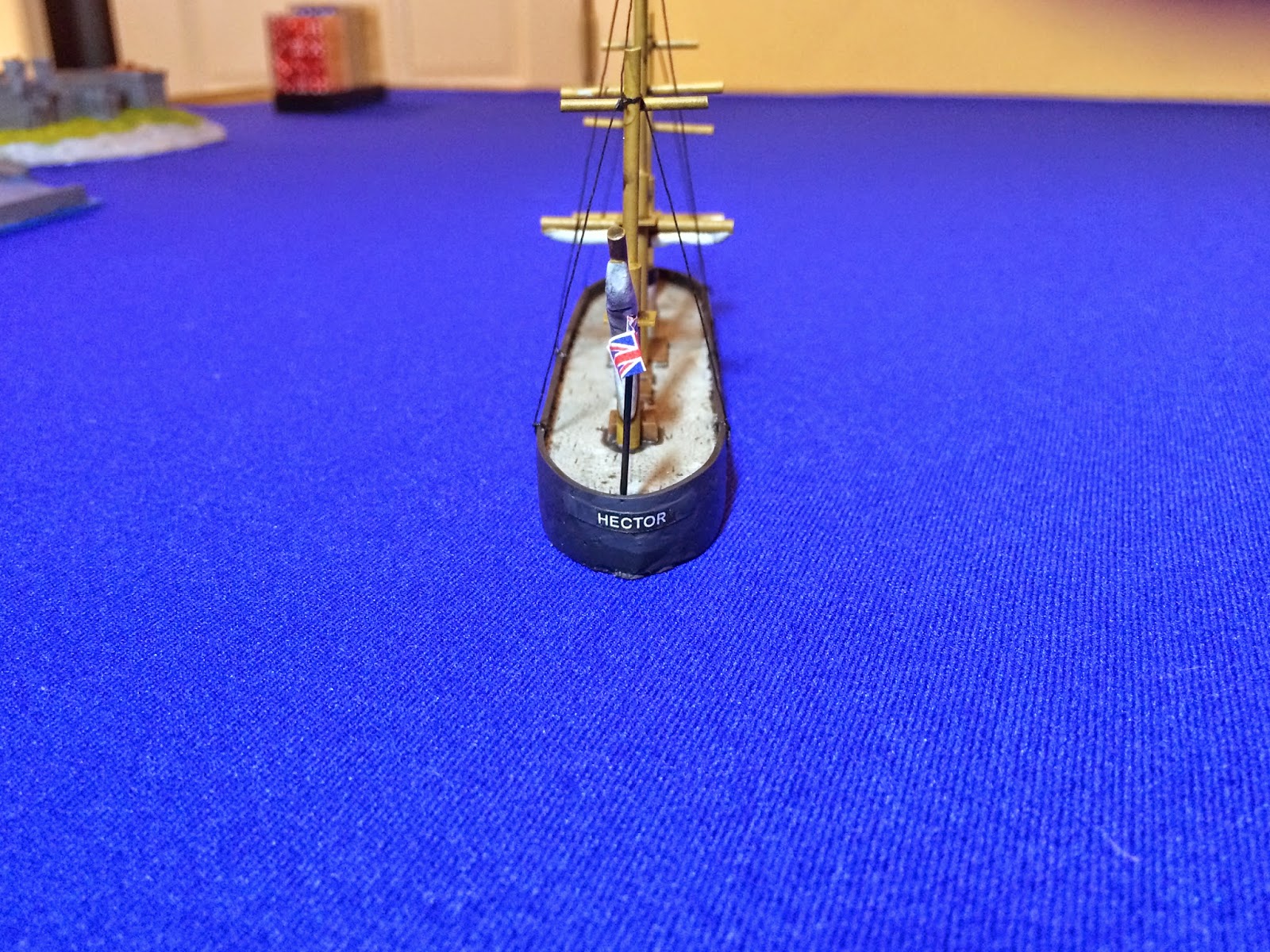 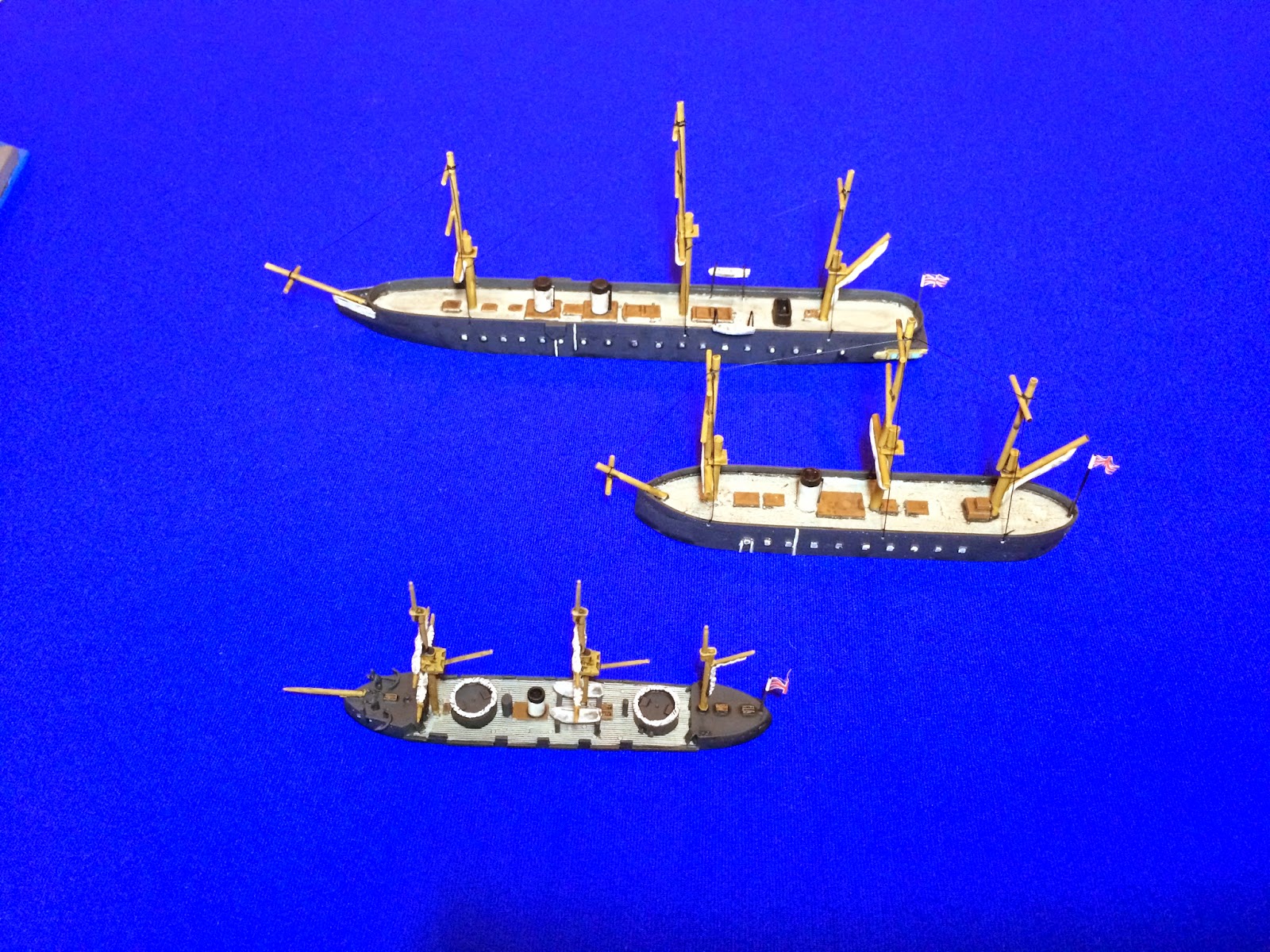 A group shot of the British Expeditionary Fleet as it currently stands.  I'll be adding a few more ships and some targets oops I mean transports. 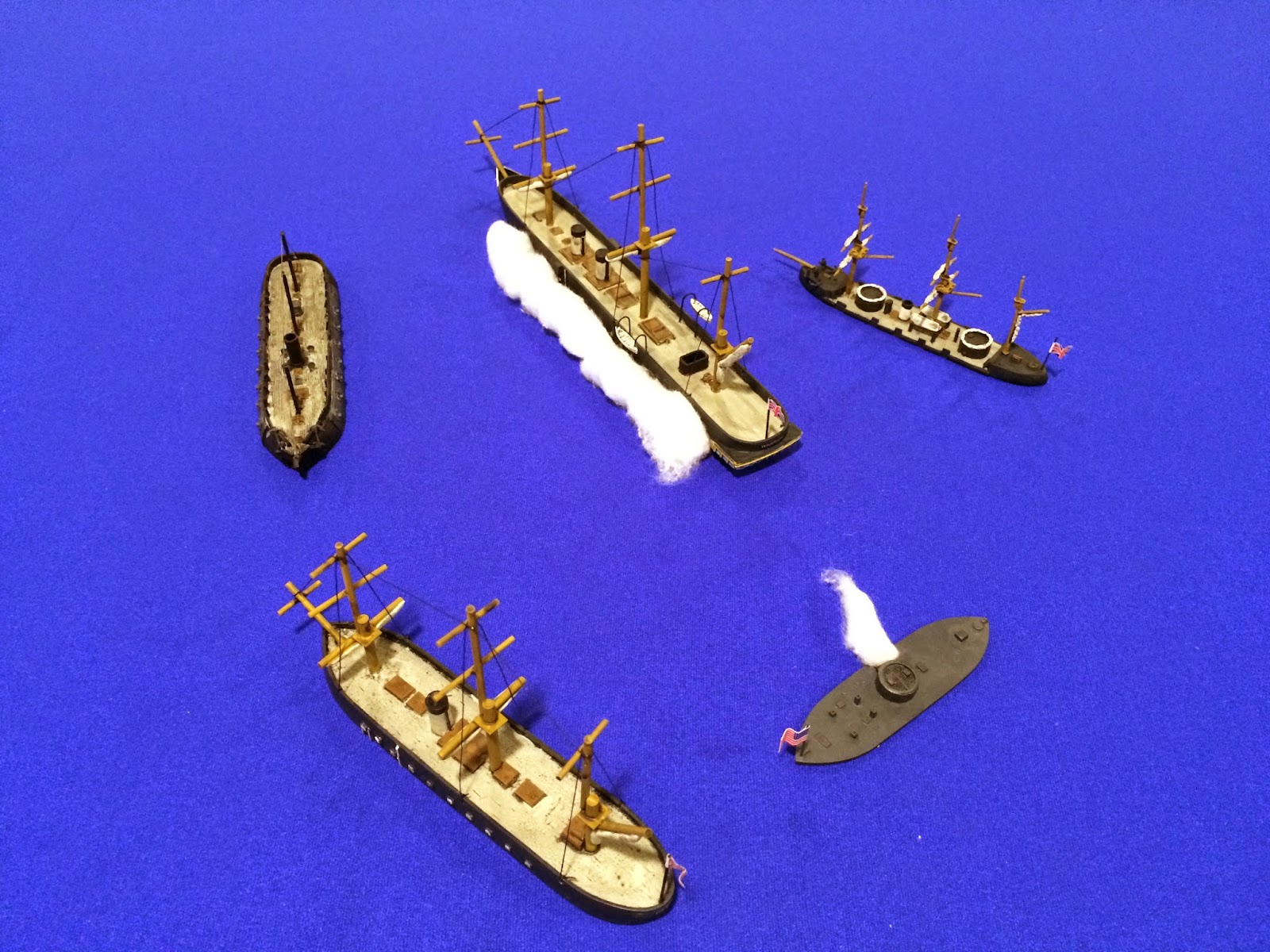 A staged "action" shot showing the British fleet taking on some US ships - the New Ironsides and the Monitor.  The picture shows just how massive the Warrior was in it's day.

All of these models will be used as part of a linked two day game I'll be putting on at Historicon in July of 2015.  The first day will feature a naval battle "somewhere along the Chesapeake" that pits a US force against a combine British / CSA fleet that's trying to force a landing to relieve a trapped Confederate army.  The outcome of the naval engagement will impact the second days game which will be a large land battle in 28mm.  If the British/CSA players are successful, the game will feature an assault by the combined CSA/ BEF on an entrenched Union army.  If they are unsuccessful during Day 1, the British army will have landed further down from the Rebels and the game will feature a Union Assault on the Confederate position with the British racing to rescue their allies.  Think Waterloo with the Union as the French, the Confederates as the British and the British as the Prussians... confusing? that's what I'm looking for.  I have found that adding an additional goal (other than winning) to a convention game does a great job in keeping everyone focused.  Oh yes, the composition of the British army during the second battle will also be influenced if any of the transports are damaged or sunk during day one. 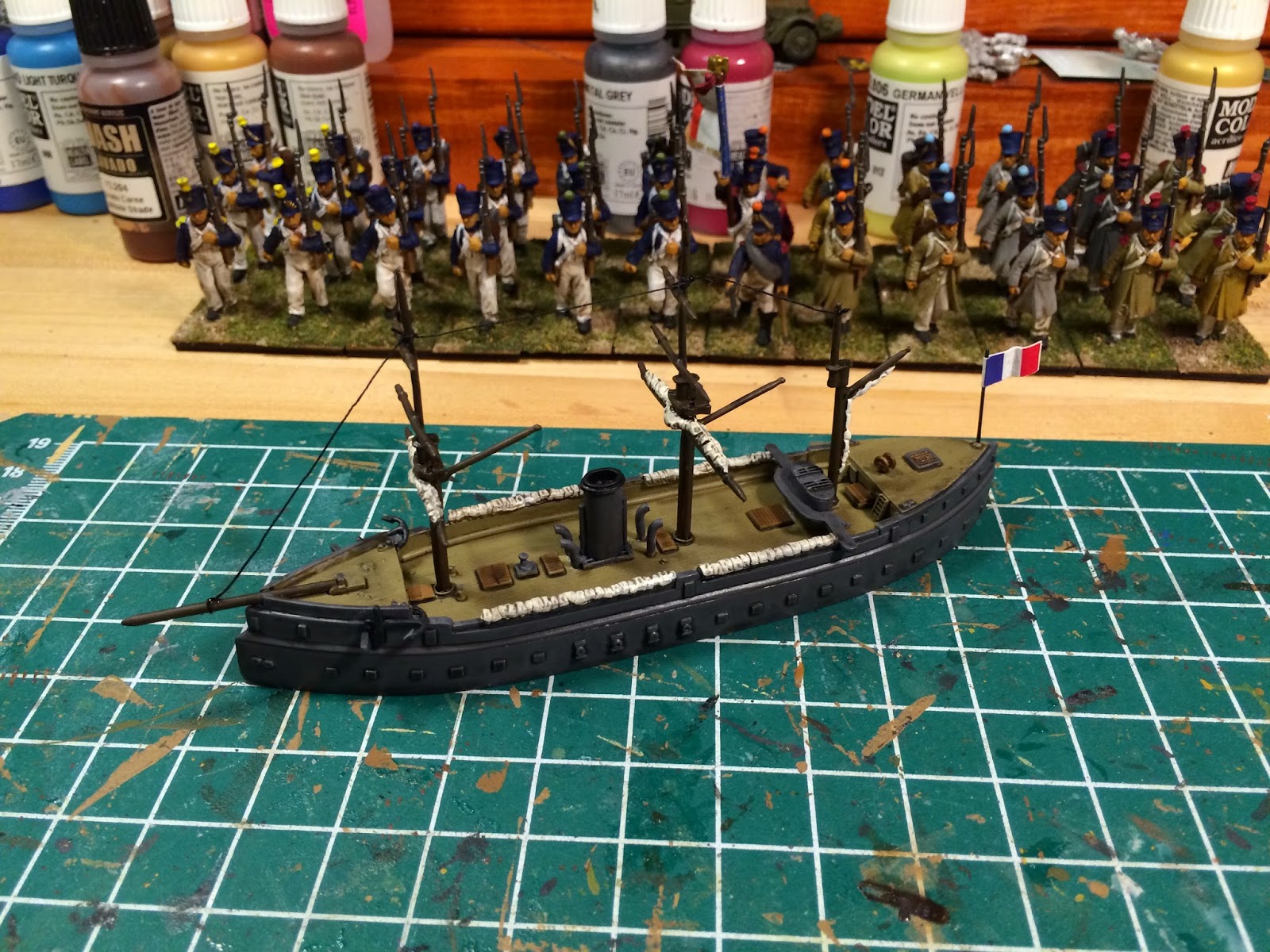 Speaking of the French, the game will feature a small French fleet sulking about.  Neither side will really know that fleet's intentions because, well, you know, they're French.  The flagship of the French fleet will be the Gloire.  This ship was launched in 1859 and has the distinction of being the first ocean going ironclad (much to the chagrin of the Royal Navy).  The model is yet again from Thoroughbred and is superb. 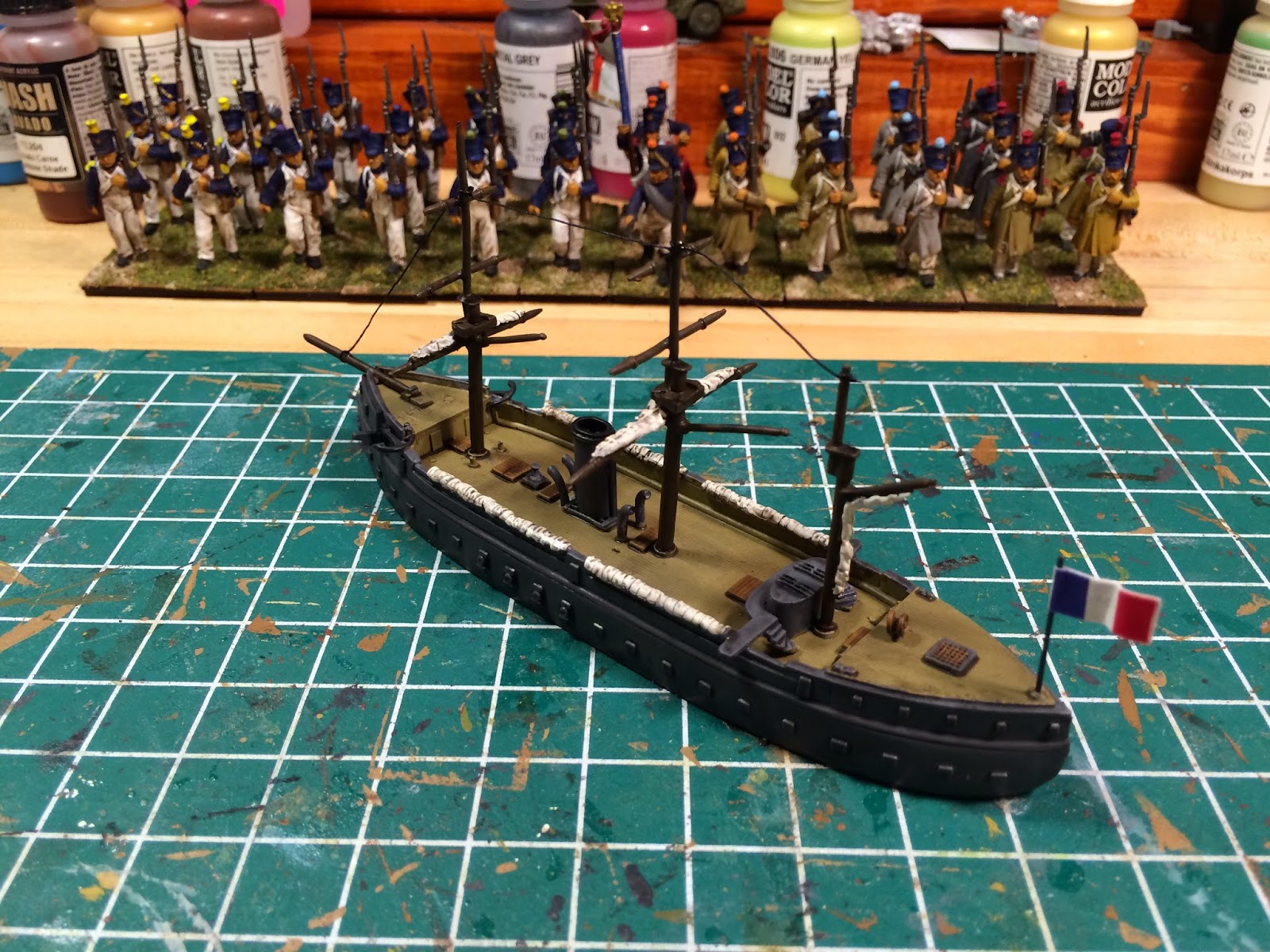 The Gloire could reach a sustained speed of 11 knots and was armed with 36 6.5 inch muzzle loading rifled guns - ship mounted rifled cannon where not all that common in this age and gave the Gloire a distinct range advantage.

The ship also had a very unusual lattice armor structure with a layer of iron ontoo of teak followed by another layer of iron and then yet more teak.  The cumulative depth of the iron sheeting was less than her British counterparts but the armor proved to be much stronger - it could shrug off a direct hit from a British 68 pounder at a range of 20 meters. 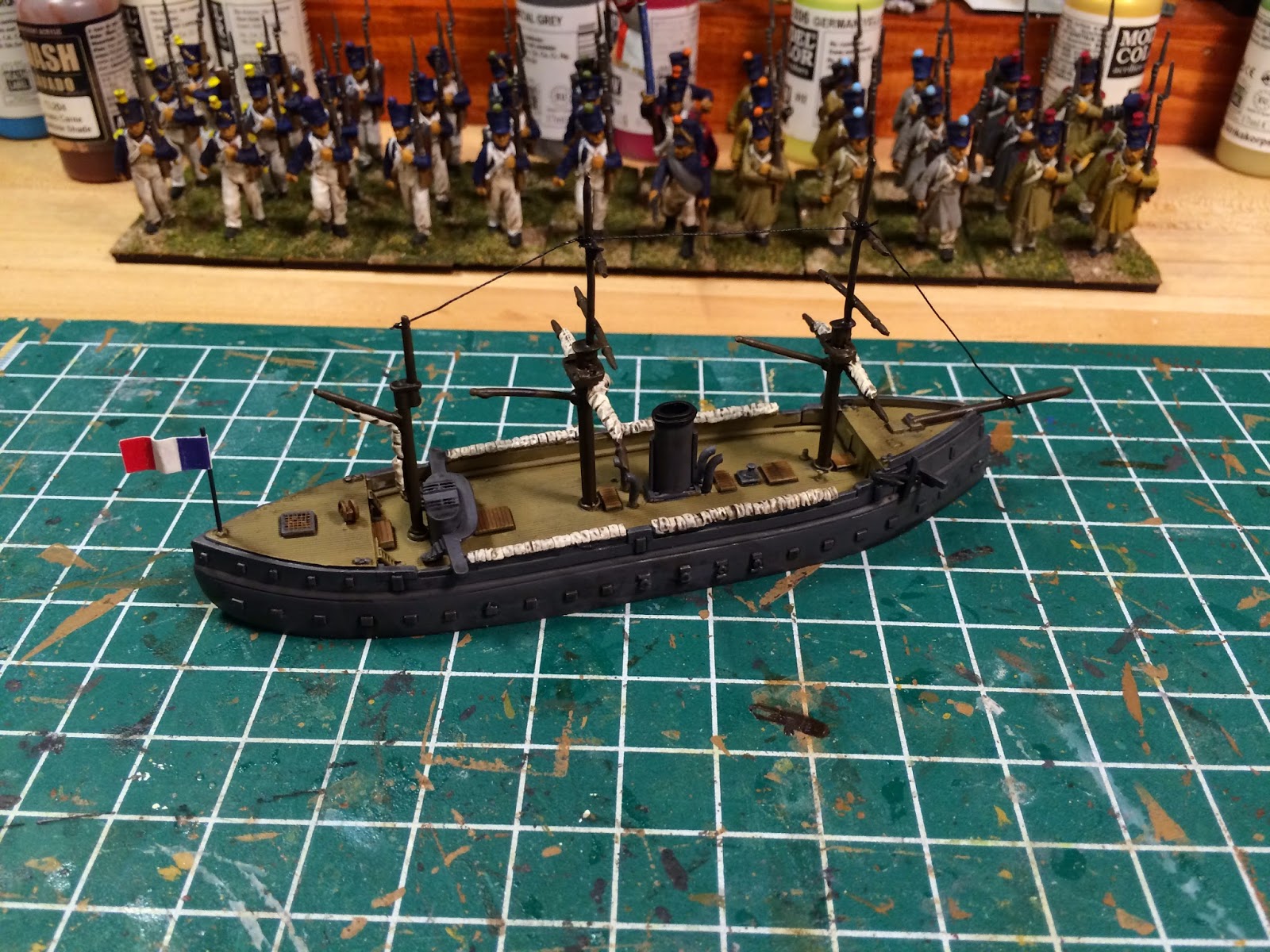 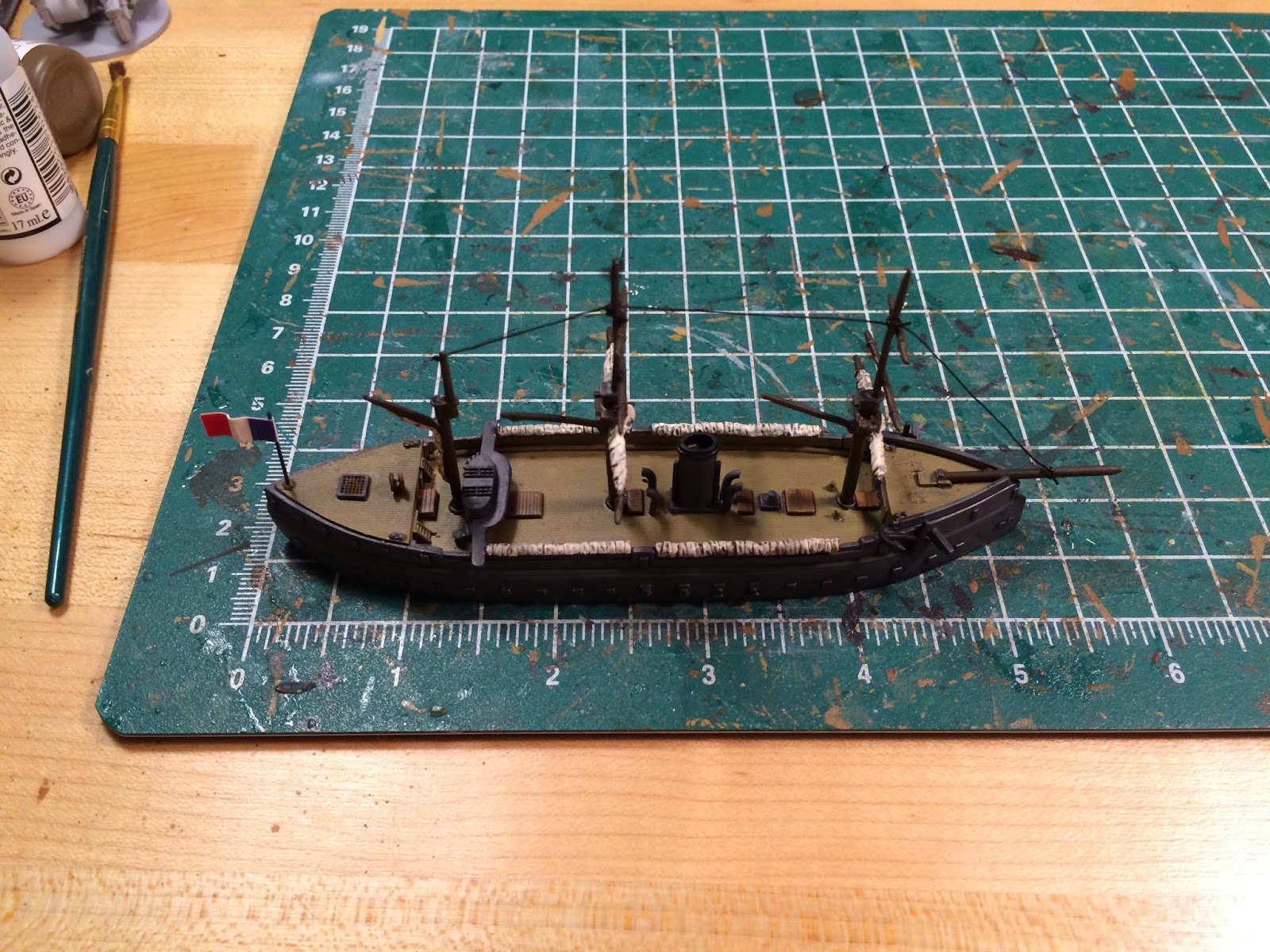 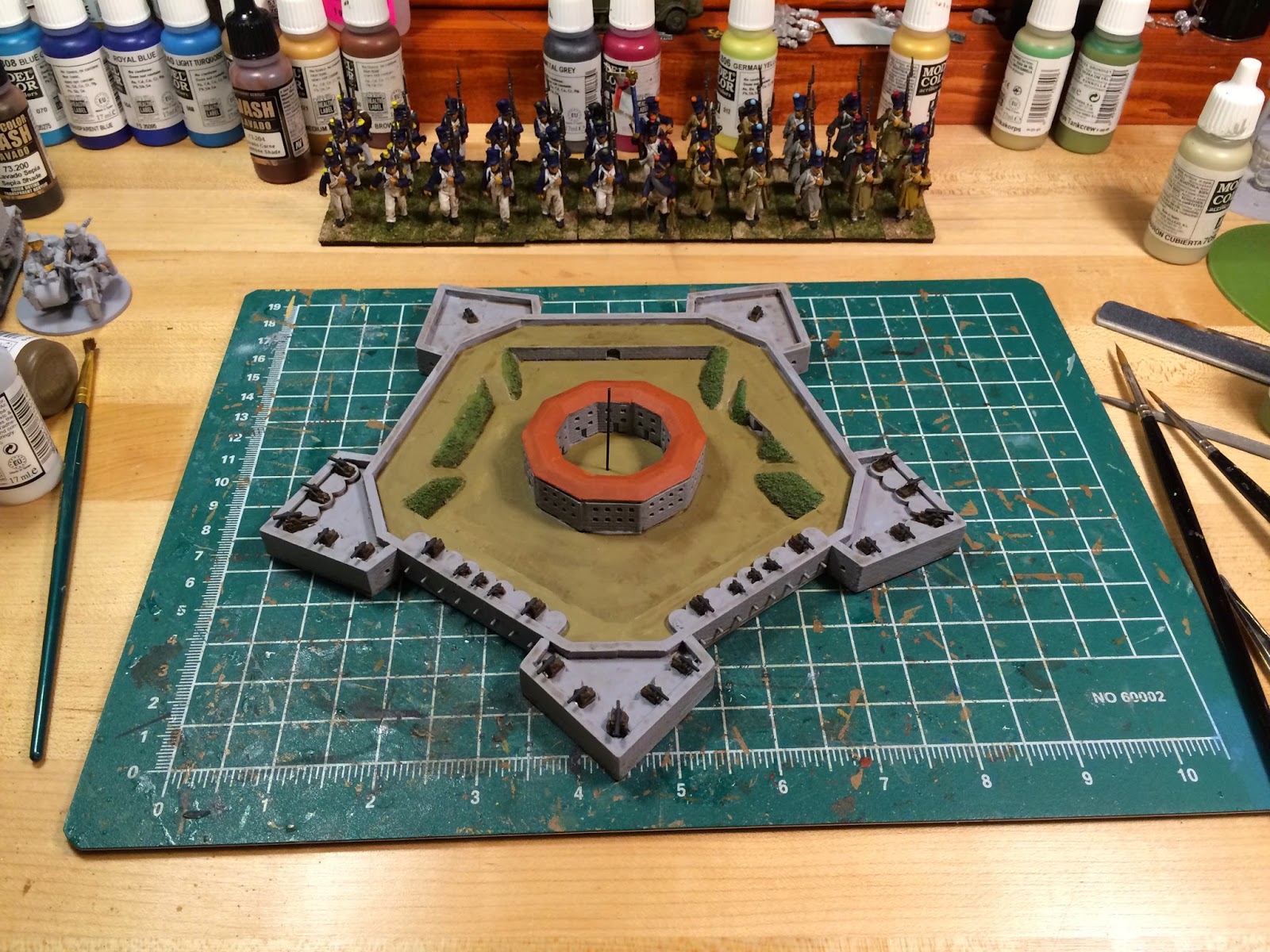 The last part of the overly long post is a Fort.  The casting comes from Bay Area Yards and is modeled on Fort Jackson in New Orleans. The fort is similar to both Fort Gaines and Fort Morgan which guarded the entrance to Mobile Bay and I spent many a day scrambling over both in my youth. 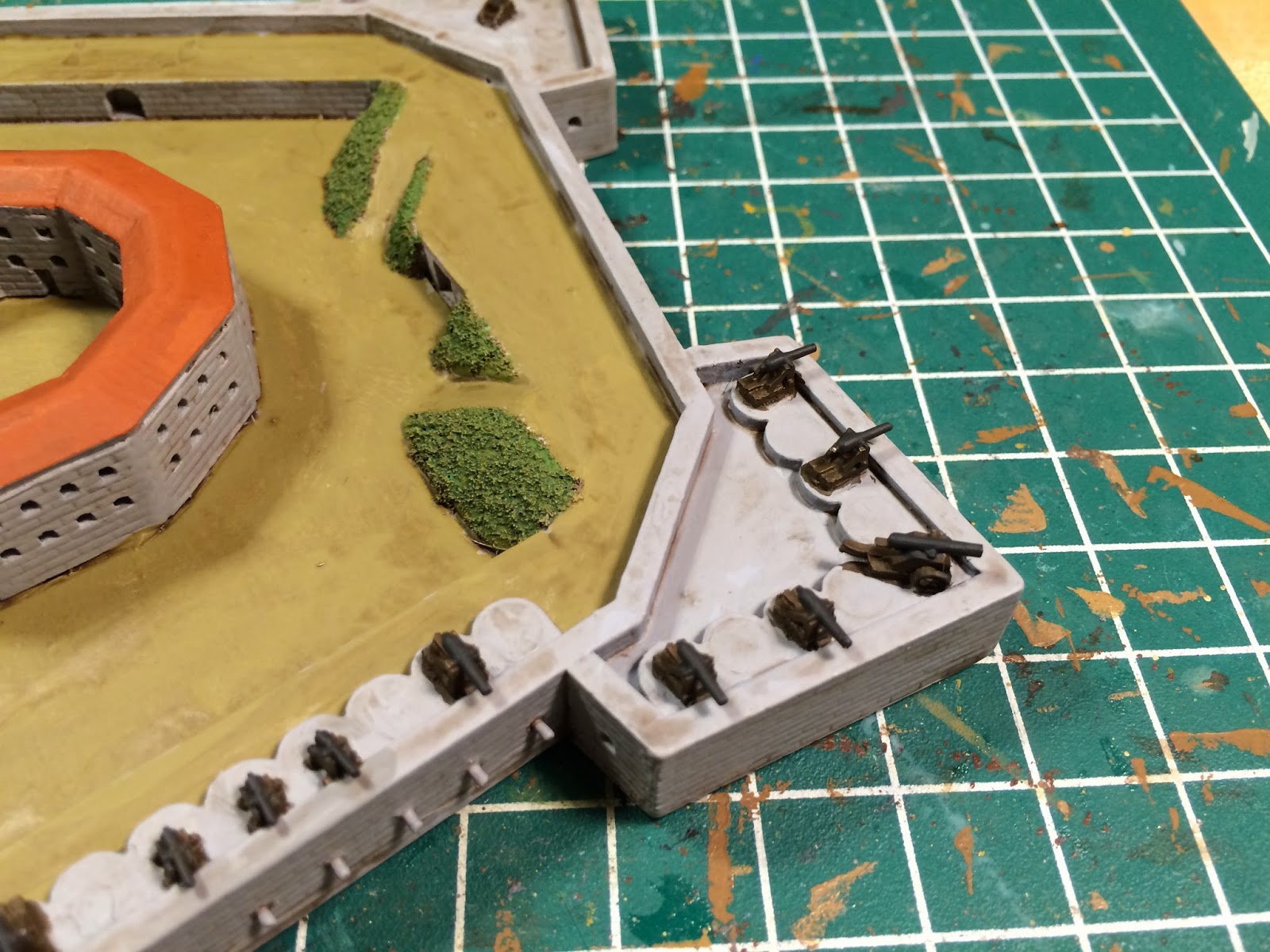 Civil War forts featured fearsome guns which were more accurate than their ship board foes (because forts generally don't bob up and down with the seas). 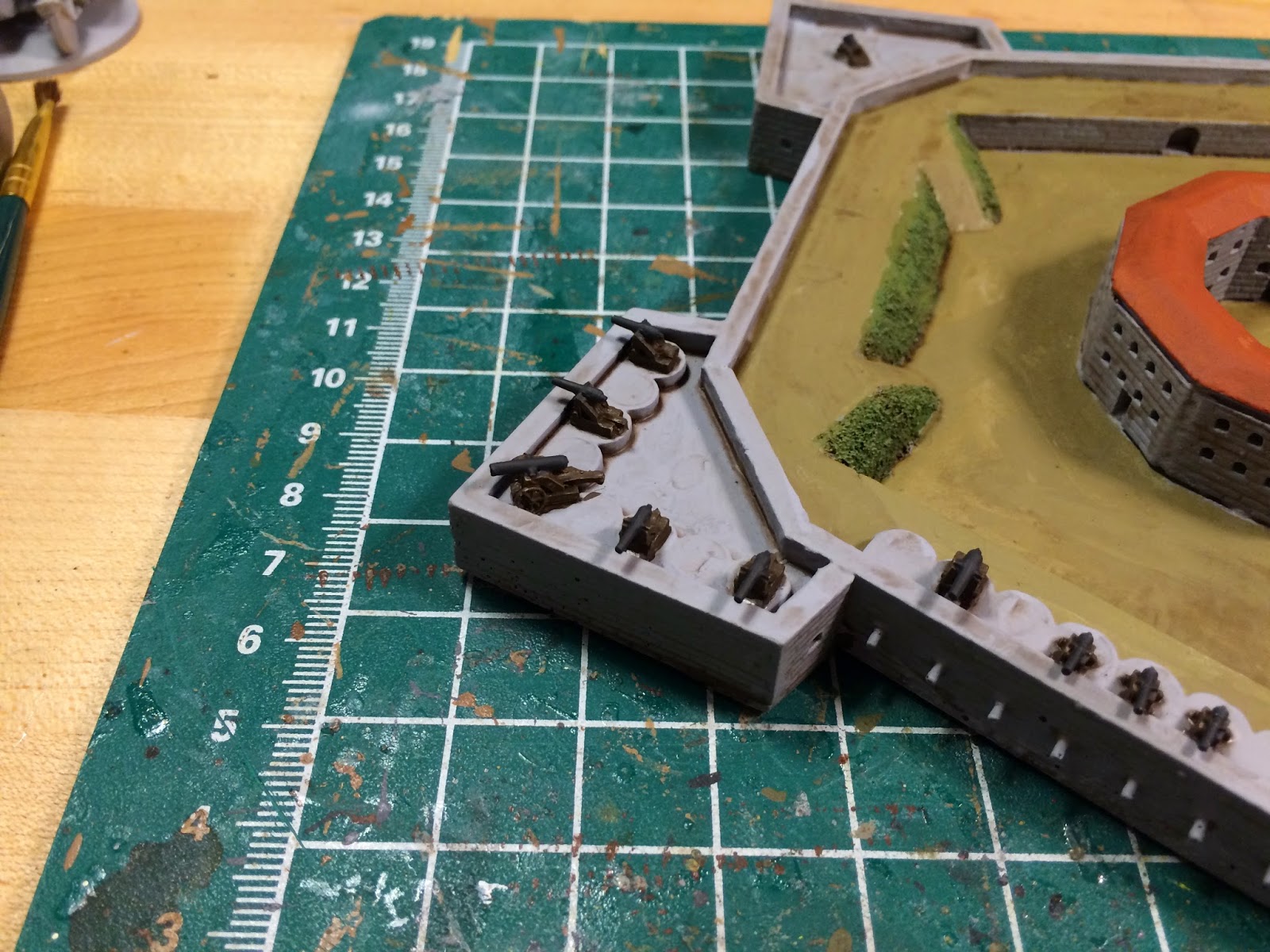 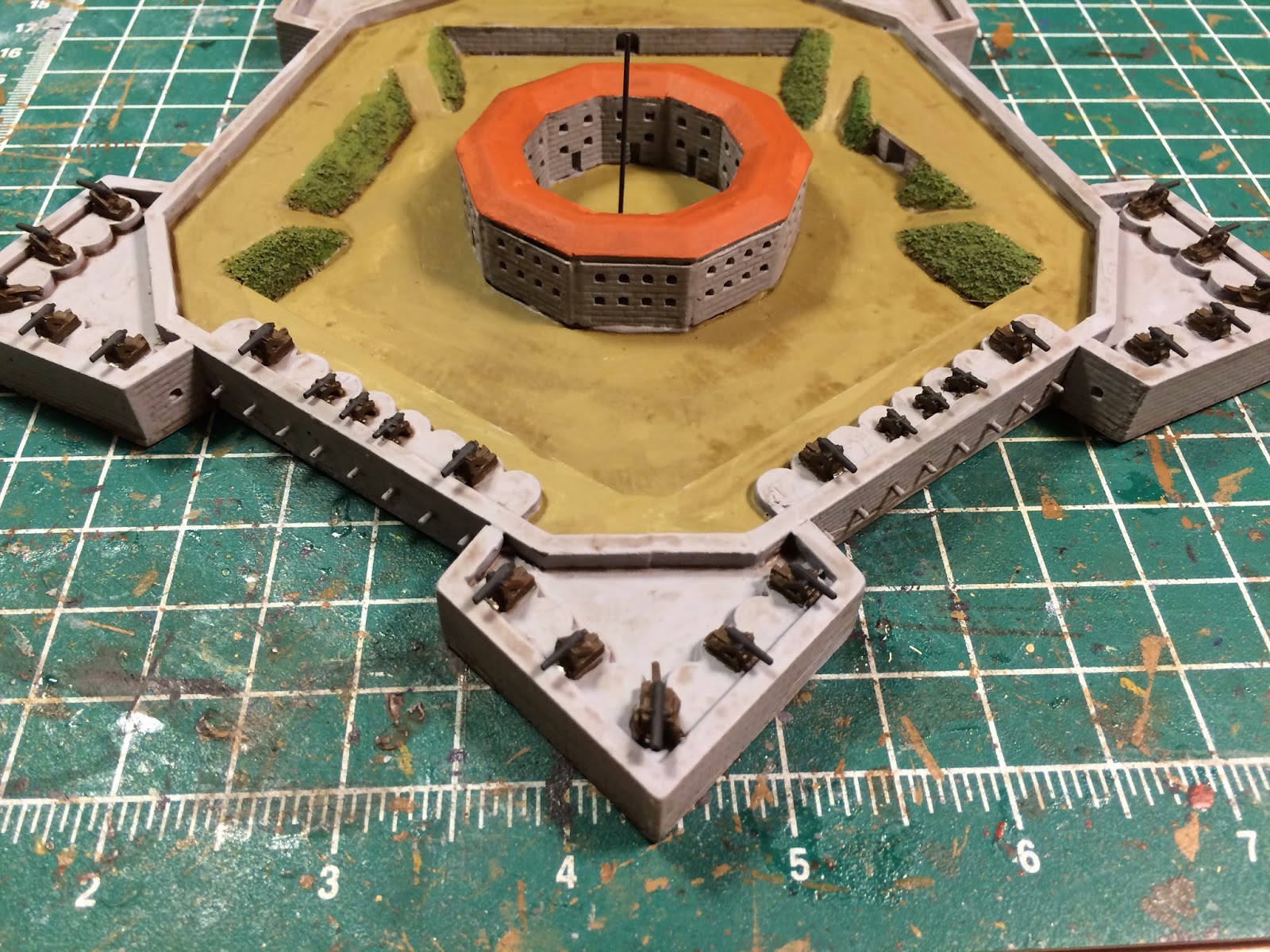 Fantastic collection Miles, made all the better for the extensive reworking you have had to to on them.

The train to Portsmouth (where I used to live) is dead easy and in one swoop you can visit Warrior, Victory and Mary Rose, plus the RN museum of course. Great day out

Very cool ships, and I do like that fort. Your productivity and quality are always impressive.

Everything about these is top class Miles. Keep them coming!

I'd agree with Paul O'G, but in addition a short ferry trip (10 minutes) to Gosport will also get you in shot of the submarine museum... By the by, I've been to a formal dinner on Warrior...! :o)