New Campaign at the Club 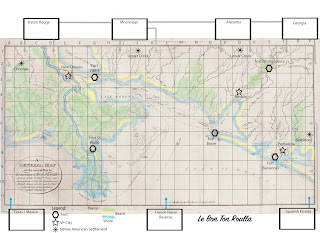 With our Waterloo campaign coming to a close (and likely defeat for the French, who have me as Grouchy), it's time to start up another Napoleonic Campaign.

I've always wanted to run a campaign, so have volunteered to do so.  This campaign will be focused on a rather silly idea of Napoleon invading the US and will use a set of campaign rules that I've been working on.  Pray for my fellow club members who are now subjected to my whims dreams of rules writing grandeur.

Why the silly scenario?  Well, last summer at Historicon, my hypothetical invasion of Britain game (To Catch a King) proved 4 out of 5 times that Napoleon would have won so naturally he would attempt to re-possess Louisiana as his next move.  Seems logical to me.  Then again, I'm a moron.

In reality, I'm hoping to run the campaign relatively quickly - (within 6 weeks) to refine the rules and see if it's feasible to run a campaign during the course of Historicon's 3 days where the details of the battles are based on how the campaign plays out.

Pictured above is the campaign map, which is based off a period map of the British Gulf campaign during the War of 1812.  This scenario has the french invading from Port-au-Prince (the bottom center box).  Napoleon will have an army of 75,000 men to invade the new world.  Opposing him are two separate forces - The US army under Jackson and the British Exile Force, or BEF, under Wellington.  For game play purposes both sides will be fairly even which implies the US built up its armed forces prior to the campaign.  It's a stretch, but I'm making this thing up anyway.

The campaign will also feature 7 potential minor allies that both sides can try to woo with diplomatic actions.  These allies include:

I'll use the blog to report general progress of the campaign but because there is hidden movement will wait until it's completed before going into detailed moves.

I really do want to get this done is six weeks, which means tight deadlines for turns.  One of the biggest problems with gaming campaigns is they start off with great enthusiasm but players can loose interest if things drag on and/or their position appears hopeless.  Let's see if we can avoid that.

nice idea, my favourite ever campaign was set in 1809 with the german states uncertain to who they would supply or back1

all the best with your projects in 2020

Great idea. Look forward to seeing how it pans out